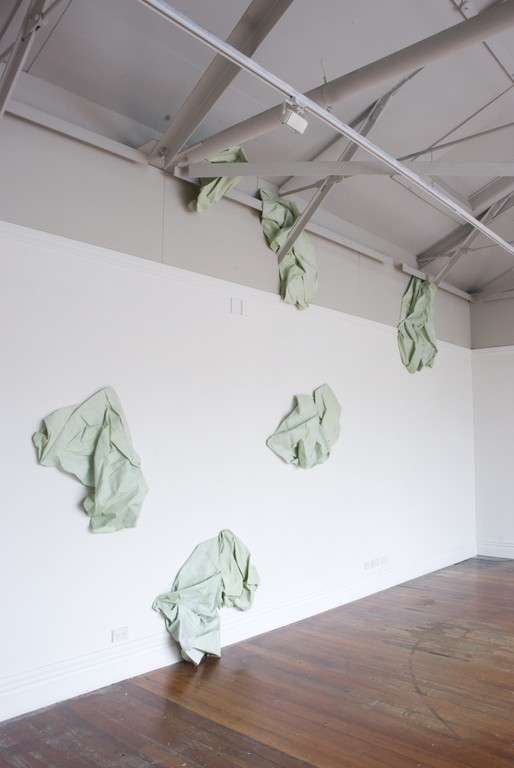 Emma Fitts demands a lot of her paintings. She puts the canvas and paint to work. There is no time for slacking around. There are things to be done and positions to be held.

Compressed Space takes a long, hard look at the gallery space. Fitts’ work rests on the dialogue between her painterly constructions and the specific parameters of the room that they are placed in. Her paintings demand this discussion. They don’t allow the gallery to be unresponsive. They call it into question and mulishly seek out confrontation.

In this show, the 1970s wood paneling around the door of Enjoy is interrogated. The wood is segmented by gaps about 2cms wide. On the opposite wall Fitts has re-created these gaps in canvas. Lines of com- pressed canvas make their way up the wall which mirror the height and length of the gaps in the entrance way. Ostensibly, she has made this negative space into positive space. The gaps no longer serve as place holders but have a formal, sculptural function.

These canvas lines are also put to work in other ways. Fitts has propped them upright against the wall and each one is placed slightly lower than the previous. This has created a very pleasing gradation of forms which is quite difficult to put into words here. This sculpture has taken its cue from the gallery’s particular architecture, but goes on to subvert this space by the abject placement of these forms on the floor of the gallery. Fitts takes space, re-formalises it and disregards its original purpose.

Some of Fitts’ larger canvas blobs have been scattered across the gallery’s larger wall. ‘Scattered’, but with intention. They creep up the wall and into the ceiling, where they hang heavily, drawing attention to the unusual beams criss-crossing the space. These works are visceral in their weight and bodily folds. If the gap works re-presented the absent space of Enjoy, these painterly/sculptural objects demand consideration of its very physical construction.

I worry though, that this discussion simplifies Fitts’ practice. Yeah, we get this whole negative/positive thing and we can see Fitts’ knack for engaging with the architecture of the gallery. This is all pretty self- evident. I want to make clear that Compressed Space is cannier than this. The real trick of this show is that Fitts is still a painter. I mean, she is still using canvas and paint, but as I said before she is really putting these materials to work as sculptural forms and as determined agents in her examination of the gallery.

Sometimes Fitts sticks her canvases together with gesso. She incrementally scrunches, layers and sticksit together so that it forms a solid mass that she can manipulate. Sometimes she squashes her canvas into tiny frames, so that when the frames are removed the canvas holds its unusual forms. Like I said, she really puts the canvas to work. 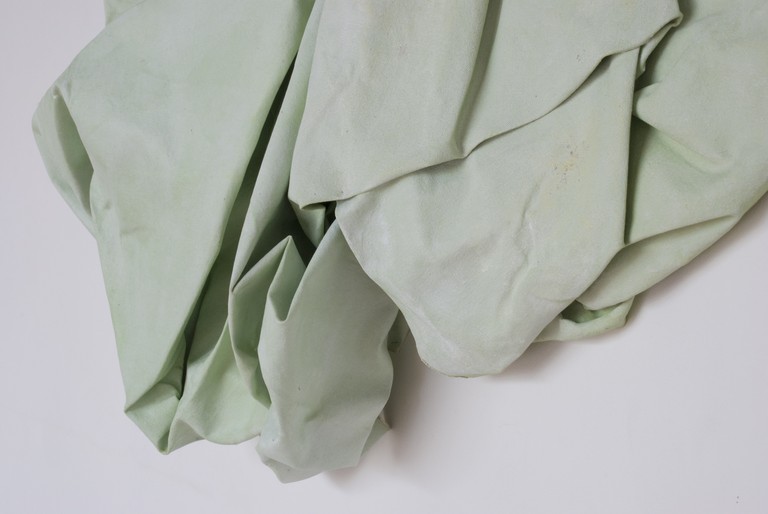 She paints it too. Here, with blues and greens which she then paints over again with a thin white to push them into the background and reduce the capacity they have to create depth. The colour is subtle, but important. Using it as she does, Fitts nods to colour’s traditional function as foreground to the canvas’s background – something which prescribes and shapes space is here relegated to creep about between the canvas’s folded creases and lines.

So, what I’m trying to get at here is that Fitts’ paintings reject the canvas as an open space to be filled with any kind of meaning or depth or critique or enlightenment or resolution or self-reflection. Instead, they literally collapse in on themselves. The space is squeezed out of them. And, so here’s my point I guess - after Fitts, in her process of pleating and sticking, has consciously ignored the potential of meters of empty canvas, she instead demands that the forms she has made respond to and articulate the prosaic realities of the gallery’s space. The compressed space of these artworks opens up the physical space of the gallery.

I admire Fitts’ manipulation of her materials and the way her works simultaneously look inwards at their own formal properties and outwards at their physical environment and its given parameters. And I like how Fitts is both a painter and a sculptor in a way that makes a writer qualify both of these terms when writing about her practice. I like it when traditional words used to describe art seem to be slightly redundant or misplaced in the face of new work. 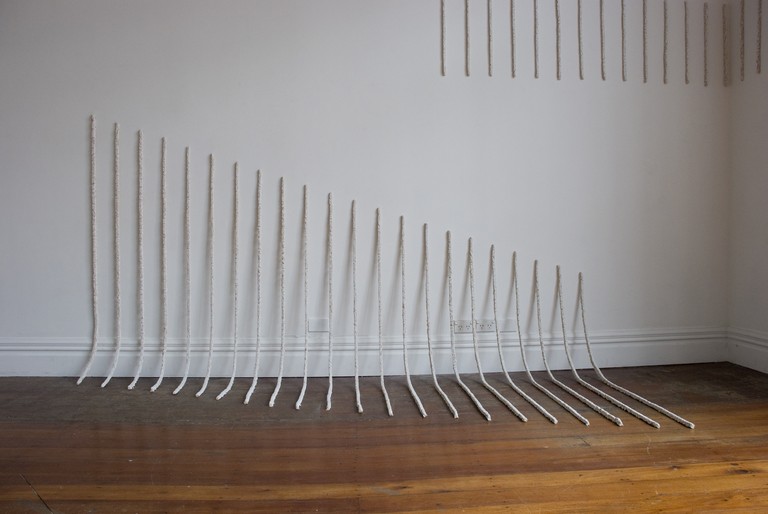 Fitts had a show at High Street Project in 2007 and Compressed Space at Enjoy feels like another consid- ered development in her ongoing examination of architecture, painting and form. Although, to suggest a linear progression seems again to simplify and do this work a disservice. The work in Compressed Space turns inward and outward in a synchronically and productively repetitive relationship with site and self.