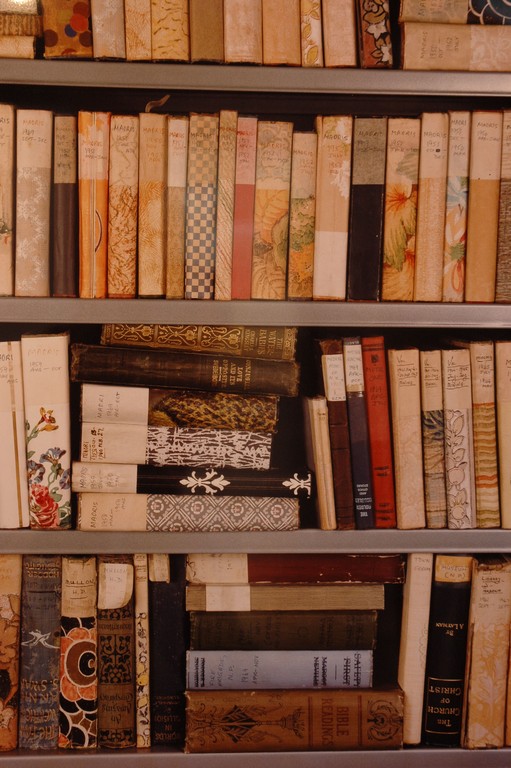 The archive around which Ann Shelton has built her photographic installation a library to scale, was accumulated in New Plymouth by Frederick Butler from the early 1920's until his death in 1982. The archive itself is an example of what has been called outsider art, whereas the Shelton piece, shown in the late summer of 2007 at Enjoy in Wellington, is a work from inside today's established structure-of-art. Outsider art has become a defining term, a cause to be defended. 'This development is largely a response to the wider electronic dissemination of information on unknown makers of things, after the discovery following someone's neglected death, of hordes of drawings and writings. Such work is widely collected today, and claims are made that these ignored geniuses are the real artists of the twentieth century.

It's a contentious issue. Some kind of standing-aside to observe one's own action is a necessity for the things made to become art. In most outsider art there is no distance, little reflection, an exposure of obsession rather than compassion. As Margaret Boden notes in The Creative Mind, "the dividing line between creativity and madness can be unclear,"and many makers experience moments of fear that their obsessiveness may have hijacked sense.1 It isn't easy to pinpoint the faculty, and the facility, which makes it possible for certain individuals to transform into physical reality their intoitive leaps of imagination, to choose successful ideas and, more often than not, to execute them. Muddle and mediocrity are never far from creative truth. The risks are great.

The photographer Ann Shelton has made her own contemporary art from the historical activities of Frederick B. Butler, whose archive is now housed in Puke Ariki, the museum and library in Taranaki. Shelton first came across the Butler archive while on a residency at the nearby Gavett-Brewster Art Gallery. Shelton initially spied some of Butler's books on a researcher's trolley in Puke Ariki's specialist reading room, they were later viewed in their entirety in the library stacks themselves. She was astonished. Saw the shelves as a collection of arcades. Imagined a kind of mapping of the archive, the observation of space from an unexpected perspective. From the outset she saw this as a project of historical recovery, not an exact science but involving personal selection of the paths chosen to follow. As the creator of this contemporary comment on work of historical import to its original maker, Shelton had to come to terms with the fact of decisive choice, of personal interpretation, a process endemic to photography in general and to her work in particular.

At Enjoy, Shelton composed an installation of twenty-six life-sized C Type colour prints, mounted to allude to the steel book shelves employed at Puke Ariki, which now houses all three and a half thousand of the scrapbooks which Butler made to hold the cuttings he incessantly collected. The scrapbooks are adapted from old books that he gathered, the spines covered by him in discarded rolls of wallpaper and re-titled to record the topic and date of the cuttings pasted to the pages inside, certain books also incor­ porating his own hand-written entries and occasional drawings. There are multiple volumes on subjects such as BIRTHS, RAILWAYS and AGRICULTURE, fewer on MAORI AND MILITIA, RAFFLES, HOSPITAL, CHESS AND DRAFTS CLUB, HARBOUR and BLOOD. 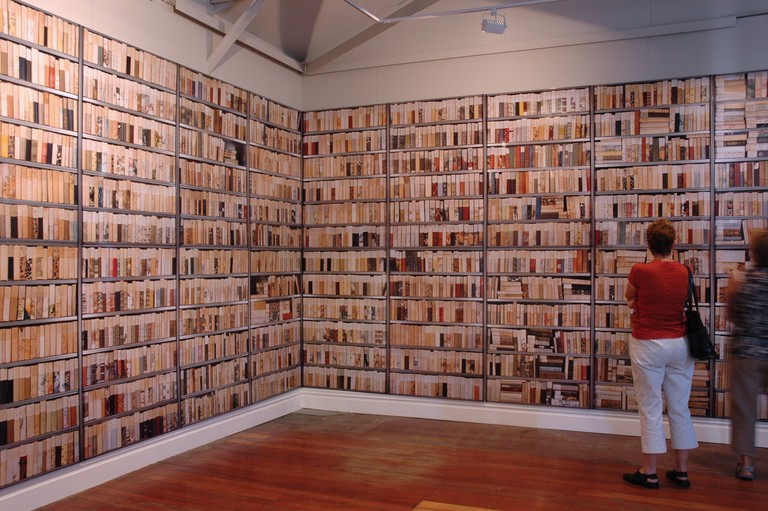 The books are all sizes, signs of the original covers tantalizingly revealed, a few of them not yet covered, turned upside down and the archive details written in ink over the original title, which remains visible: The Coral Island by R. M. Balantyne, Psychology by William James, Barriers Burned Away by Rev. E. P. Roe. The majority of extracts date from between 1941 and 1969, as meticulously detailed on the paper title- labels stuck to the spines; Butler also acquired a cache of newspapers from the 1880's and 1890's, which he similarly cut up and filed.

The overall effect in the gallery installation of Shelton's a library to scale verged on the sculptural. The individual books are united into a single inalterable composition in the photographer's conception of the piece, achieved in part through the particular lighting, which gives a texture also to the steel of the shelves. There's a beguiling softness to the work, a humanity, and the sense pg her respect fro the original endeavour of Frederick B. Butler, who was born in 1903, surving until he was almost eighty. That is hat it feels like to the obsrver, the books unopenable, as intimate an external portrait of the man himself as posthumously achievable.

Coinciding with the Enjoy show, Wellington's Paramount Cinema was screening Jessica Yu's prize­ winning documentary of 2006 about the work of another outsider, Henry Darger, who died the year after Butler, in Chicago, the city where he had lived his entire life. Nobody knew that this caretaker had devoted his free hours to gathering discarded books  and newspapers from which hundreds oflong wallpaper-like drawings were inspired. These, together with Darger's vast connected novel, came to light after his reclusive death, aged eighty-three. Again, as with Shelton, it takes an artist expressing herself in a different medium, in this case film, to make a work of power from the isolated endeavours of a man of whom a neighbour said: 'He was never angry.He was never happy.He was always the same.' Darger sel­dom spoke to anybody, and wrote of his pictures: 'They have been company.They are my greatest friends.'

Both Shelton and Yu, because of the inquisitive nature of their work, became closely involved with the deceased lives of the men whose work they were documenting. Long after completion of the first part of a library to scale Shelton is still researching the archive, exploring other projects on Frederick B. Butler. The archive was not Butler's only activity. He was a photographer, for a while running his own gallery.  He was also a quilt maker, and he set up at home his own extravagant museum. Shelton construes con­ siderable creative quality in Butler's endeavours. This is understandable. The books in her photographs are beautiful, shot using an old-fashioned camera and copy-lighting at a forty-five degree angle to achieve a soft hyper-reality. Shelton shares some common interests with Butler,including a concern to document individual people and specific locations.2 Indeed Butler used red-highlighted cards, with detailed indexing of the varied whereabouts of information on named characters and places. Inone of his diary entries Butler described himself as 'an artist and lover of beauty', suggesting an aesthetic intent. Maybe. It is this very uncertainty that attracted Shelton in the first place, the combination in Butler's work of the orthodox and idiosyncratic, his lirninal existence on the boundary between the utilitarian and creative.

And yet, while it's seldom possible retrospectively to judge  what the emotional purpose was behind someone's activity, the impression nevertheless remains of a self-referential character that appears to have given little creative thought as to how anybody else might use his work. Where Butler was obsessed, Shelton is focused. This is more than a linguistic nicety, for it points to a vital difference between outsider and insider art: one has the effect of keeping people out, the other is designed to let them in. Shelton's a library to scale explores questions of availability,the books in her photographs tantalizingly attractive and yet unable to be taken down and opened. Layers of meaning are consciously examined in her work.

In the 2006 exhibition at the Adam Art Gallery, Archiving Fever, a section of the library photographs were shown alongside Shelton's video work on the archive.3 Inside the volumes depicted in the videos the original contents could be seen to peer out behind the smaller cuttings, upside down, often in odd contrast. Many of the subjects reveal Butler's concern for places in New Plymouth familiar from much of a lifetime spent there; in one volume he drew detailed diagrams of new road-markings as they were painted in a local streets. 'The books are visually appealing, with their repeating wallpaper covers, faded and battered by now.'Their present aesthetic appeal, though, is largely a facet of time, the response of a later generation to the exceptional nature of this archive. Butler seems to have come to his decisions on what for him were practical grounds, concerned with the making of containers for his cuttings and not with a communicable artistic statement. He believed above all else in the archival value of his work. With a different aim, Shelton constructs her own work of art out of Butler's dedication, replaces his solitary labour with works destioed to be seen, with the desire to capture other people's attention, to move, to hold, to make a lasting impression.

The form doesn't have to be novel to be creative, in a photograph or a poem. The established models are capable of containing a conjunction of feeling and language that is like nothing else, beautiful and intelligent, something that could be made by none other than the person who did it. Shelton's work has recurringly been connected to books. She first came to wider attention with the publication in 1997 of REDEYE - documentation of the people in and around the Auckland artist-run space Teststrip. She has worked in a variety of techniques to suit the chosen context, keen to connect specific subjects to her wider ideas on production ofimage. Interviewed by Gareth Shute for his book Insights, Shelton spoke of her use of the digital camera as a kind of notebook, or sketchpad, seldom for the final shot.4 This has led her to eiqieriment with the presentation of her work, as in a library to scale, and in her gallery exhibi­ tions of mirror images. Image. Imagination. Intent. All words which frequently spring to mind around her photographs.

Intent and imagination, both of these are important. They distingnish the interesting from the curious. Success in communicatiog the intended effect matters less than the desire in itself to do so. Due to the erratic passage of fashion, insider art can sometimes be as limited in its appeal to contemporaries as outsider art. The nature, though, of the imagination at work is altogether different. This difference is beautifully illustrated in Ann Shelton's photographic installation.