The painter Agnes Martin said in an interview:

‘One time, I was coming out of the mountains, and having painted the mountains,
I came out on this plain, and I thought, Ah! What a relief! ... I thought, this is for me! The expansiveness of it. I sort of surrendered. This plain ... it was just like a straight line. It was a horizontal line.’

Martin, of course, was talking about death.

This is how it felt to be in Martyn Reynolds’ show. To surrender to the empty moment. To stop trying to outrun it. Breathe. Relax. Drift.

Though Martyn was talking about life:

‘The ineffable linearity of life that death reveals sheds a strange light on the things that remain. And these things move in both directions. The operation of memory and the expected future shape our notion of time in the present.’

In forming a relationship to lived experience it seems Martyn’s work is motivated by bringing art back to basics; to understanding the notion of perception. His work makes reference to the simple function of decision-making and how spatial arrangement can inform: it is also an attempt at knowing presence.

He brings voice to this through a gesture of minimal form. He uses space to construct experiences that bring one back to the simplicity of perception and to the slow revealing pace of the metaphor and its purpose. Light often becomes a way to amplify the situation.

The simplicity of constructing lines, though is predicated on an understanding of the decision required to navigate the difference a line makes. The way Martyn organises the room spatially points back to behaving within the public realm: the place where politics lie. His work has a certain efficiency yet it entertains in a spaciousness—and by implication the socio-political—allowing ideas to be left unknowable; acknowledging that distance and deferral are unavoidably present within any form of communication. 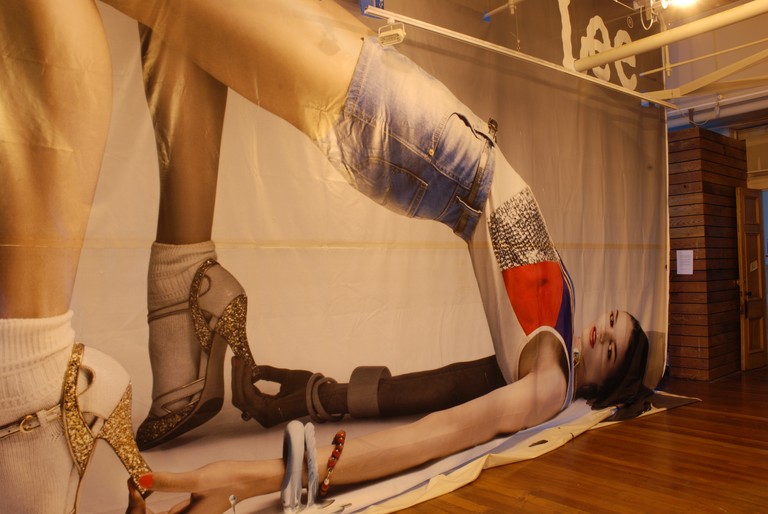 In relating to Minimalism and its phenomenological underpinnings, and further still to its performative tendencies, Martyn’s work takes on this reference point and brings it into play with the political fabric of his moment. He uses the gallery as a situation to consider this time of hyper-reflexivity—we have become so self-aware, but at a rate that doesn’t allow us to process—to question how the gallery may find a way through and re-engage in the political (again).

For this project, Martyn constructed his line through space by using an image sourced from another place outside of the gallery frame. This image was a ready-made, a billboard advertising Lee Jeans. The large-scale advertisement styled its aesthetic on a re-hashed ‘80s fashion, similar to the dress sense of a Communist hangover. Although the selected image suggested that the work was engaging in the ideology underlying its aesthetic, and to the rules of design that this photo-shop liquid pixellated image seduced, the work had a more immediate focus. It questioned how an image could be applied to a space for compositional reasons. And how the composition of space has an effect of producing an experience that is both in, and of the present. Meaning in this case is not to be found in the image or in the use of materials. Rather, as a sculptural metaphor, it framed space to generate for the viewer the contrary premise of analysing presence.

Fitting the gallery tightly, efficiently, the formal attributes of the work dissected the space into two parts like a well-edited film cut, a line on a page. One side was lit artificially, the other allowing itself light from the window facing. There was logic in the work that succinctly understood its relationship to thescale of the site and the strategy of juxtaposition; colliding the coded interior of the gallery that the billboard image faced into (artificially lit by portal lights suitable for maintaining life indoors), with the framed view of public space, an urban and commercially noisy scene (lit naturally by the gallery’s distinctive windows).

The action of the viewer’s body oscillating and recording itself between the two divided sites was an important aspect of the work’s observation. The decisions the demarcation of the space allowed for— where one chose to place their body, whether they chose to look away or towards the image, and how the sensation of vision was affected by the different qualities of light—caused a certain reckoning with the two different sides and the construction of the picture’s plane. A few art historical references come to mind to give visual footnote to this reflexive viewing; Carl Andre’s floor based lines; the loose felt drapes of Robert Morris. Although the sense of oscillation and decision between what to view and where to be did not underlie these past works, Martyn’s use of the minimal gesture gives, through the use of a place- holder, space for the viewer to complicate and be a variable within the diagrammatic form, and to occupy, quite explicitly, the inter-subjective space between intention and reception.

The image functions as a mirror, drawing attention to it only to reflect perception back into the viewer’s space: a space of physical manoeuvring, felt and lead by the body. The diagram above is unable to articu- late the mirror. The content of the work was not to be found in the object but in the space composed by the presence of the image surface. For Martyn, it seems, it is about finding the simplest and most efficient way to make strange the space, and for this space to become a registering of the structured spaces— architectural, social, political or otherwise—that we live by. Mirrors, or in this case the metaphor of one, are good for this.

Efficiency is an ever-increasing issue, as concerns for sustainability attest to, urban space demands, and work ethics stress. However, sometimes the most effective of efficiencies are unanticipated. There is no dia- gram to follow. If there is a recognisable pattern it comes from balancing intention with an openness for the unexpected and making effective use of what is at hand, the performativity latent within a situation.

To make a work that understands its own method of construction relates to building (and believing) in the tautology of the un-structured composition. Just before Martyn left the exhibition he gifteda song to the space. It is entitled No letting go, no holding back. He says of this song:

‘The beat’s constructed entirely of two interweaving hand-claps. These hand-claps are beyond me somehow. Sometimes I think they’re identical beats arranged slightly off time from each other, at other times I wonder if they’re mirror images.’

The reflexive pursuit for logic and efficiency also extends to consider Martyn’s interest in another visual modernist trope, deeply related to the workings of the mirror: the cinematic experience. The viewer was invited to navigate between two frames. To escape within either space or to understand each for what it is, as a construction whose mechanisms of formula are close at hand.

I used to live with a friend who would play one song all day long, on repeat. I asked him why he did this. I think his answer was quite akin to the nature of my own shoe wearing: one pair at a time so as to recall time. He wanted to make chapters.

This is what I see Martyn doing. He seems to be making studies in the want to know, and yet recognises the futility of this desire. As isn’t it the case that however much you repeat the song or wear the shoes in, it’s uncertain as to whether you’ll ever really reach a point of knowing it.

Martin Heidegger proposed that in the moment of vision we experience a direct sensation that we can grasp in the immediacy of the present, which gives rise to an understanding of presence.

‘The moment of vision’, he wrote in Being and Time, ‘permits us to encounter for the first time what can be ‘in a time’ as ‘ready-to-hand’ or ‘present-to-hand’. We experience the moment of vision in a non-rational way.’

I think Heidegger is hand-clapping but without the reflexivity we have come to be versed in.
The ubiquity of cinema and its tracking of experience through a series of timeframes has informed the way we see, and our understanding of the present as a construction, a contradiction. Martyn’s framing of space works in more self-aware, stranger ways.

Through the enfolding of the outside in and the inside out, and the differences of the artificial and the naturally lit, Martyn gives rise to presence and locates it in the refracting line that the image takes up. It is here, in this place that both reception and intention point towards, that finite meaning can never be known. The negotiation of this state is where I believe Martyn places the political, in the tension between a desire for shared experience and the distance inherent in its attempt. Awareness of difference gives agency.