A place for the sultry

In his recent exhibition Indecent Literature at Enjoy Public Art Gallery, painter Robbie Handcock embraces a queer aesthetic that is unabashedly relational; critically investigating a queer existence through a politicised looking back that is at once playful, sexy and subversive. Both stylistically and in terms of identity, Handcock situates his lush and sensuous work within what he described as a “network of gay associations, affiliations and references."1 By foregrounding the significance of his source material through colour and form, Handcock demonstrates how gay sexuality is positioned within broader social, political and economic networks. In looking back, he casts a view to the future, positioning it as a queer domain.

Handcock’s paintings offer meaning beyond the frames of the canvas. They are not scenes insular to themselves. By adapting imagery from James Bidgood’s Pink Narcissus (1971) and Bob Mizer’s ‘fitness’ magazine Physique Pictorial (1951–1990) Handcock asserts a politics profound for its place within living bodies, not merely in paint. Referencing Physique Pictorial is particularly salient because of its socio-legal history. In order to evade censorship laws of the 1950s and 60s, the homoerotic publication was originally passed off as a men’s health and fitness magazine. To this end, defying repression was instrumental to building a gay public identity. As Gilad Padva writes of the beefcake aesthetic, “in a culture that denigrates homoeroticism, pornography provides some of the only ‘positive’ representations of gay sexuality."2 In fact, producing and consuming such media was arguably one of the most important political activities for the gay community in the post-war era.3 A deep history of becoming ties that pioneering work to the present day. Handcock’s paintings are to that history what the verdant summer is to spring.

Handcock’s references to the work of other artists are made all the more tangible through colour. Washed blues and fleshy pinks weep tenderly as if skin has just been stripped from them. Prominent too are the fluid drips that run down most of the paintings—a direct homage to Keith Boadwee’s ‘scatological’ works.4 For example, Boadwee’s Crystal Geyser (2000) is a photograph of painted boulders with his own ass made up like a volcano, erupting white paint across the room. In Handcock’s paintings Boys at the Urinal (2017) and Physique Pictorial (2016) we also find similarities with the figuration and bright hues of David Hockney’s work of the 60’s and 70’s. Coincidentally, it was the images of beefcake icons reclining poolside that enticed Hockney to California and to then make those paintings. Moreover, Hockney had discovered those images in Physique Pictorial and was moved, like Handcock, by Bob Mizer’s work.5 In conjuring connections to these artists, Handcock reveals not only how a queer aesthetic influenced them, but also how they influenced it, him and us. It is a discovery of discovery. There, confronting the figures, we are animated by the ghosts of history. 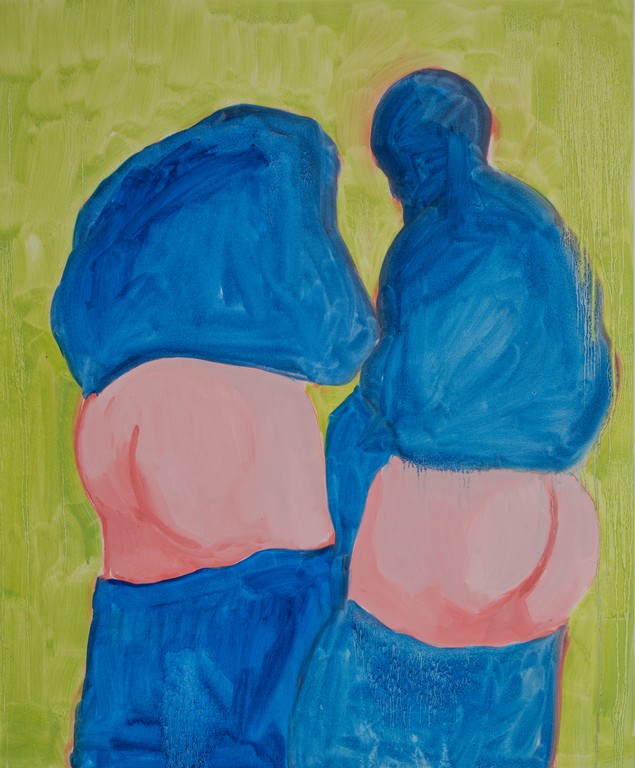 Colour also functions as a provocation. As Jack Halberstam writes, “[i]f straightness (masculinity in particular) is associated with minimalism, then excess (of form, color, or content) becomes the signification of the feminine, the queer, and the monstrous.”6 By making reference to the world outside of them, Handcock’s works become what David Joselit calls ‘transitive’; works that mark the passage of things as they affect and are affected by other things.7 Inherent in this, and vital to Indecent Literature, is a rejection of hegemonic, linear history. Heterosexuality, the progenital, regimenting power, is forever territorialising in forward movement. It looks back to see how far it has come but never defines itself, for it is always concerned with defining difference and Otherness. This forward thrust of heterosexual history demands conformity and regulates sexuality and gender relations. Works such as Pan (2017) and Delicate Convict (2016) respond with bright colour and explicit eroticism. They are an autonomous assertion of an overt and unapologetic queer sexuality—a reclamation of the past that will not conform nor be co-opted or tranquilised. It is not merely looking back to see how things have changed, it is looking back to see how people survived. 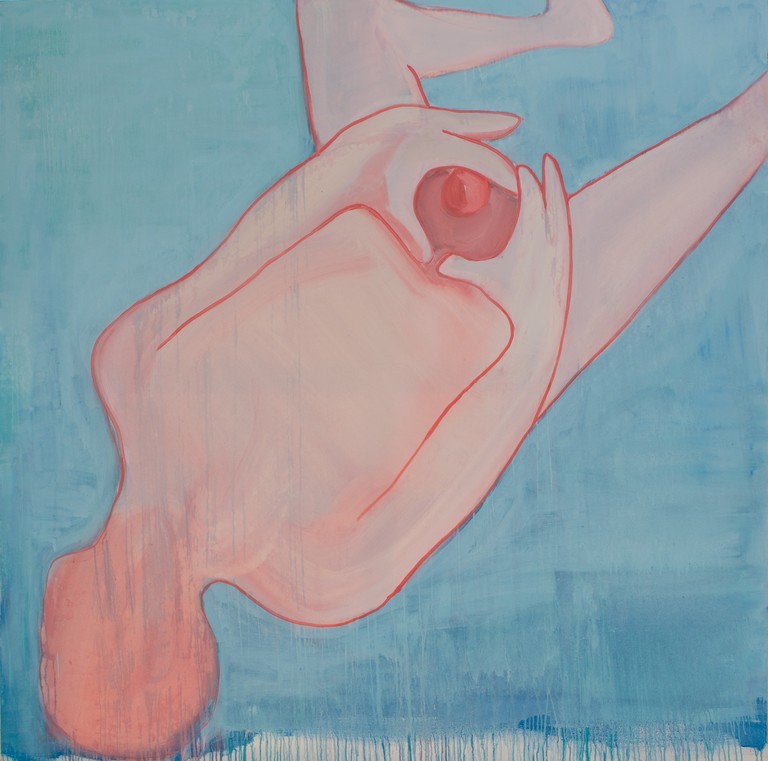 Survival was underground. And here, in the underground, is precisely the place from which the future grows. Handcock is, like Koestenbaum, looking back to moments of sexual possibility in hope and defiance. Sexual identity is something that can be assimilated. Contemporary straight society accepts queerness so long as it poses no threat. We see this in Physique Pictorial itself. The handsome and muscular men do not ostensibly undermine hegemonic practices of kinship or sexuality. It appeared that homoeroticism could be tolerated provided that it upheld a recognised masculine ideal. But through painted form and the translation of ‘pathetic’ erotic practises, Handcock disperses the shroud with which society attempts to cover queer sexuality. These paintings are not inert reproductions of their source imagery. Instead, Indecent Literature revisits and extolls the sexual underground. Working from casual sketches and paring back the painterly embellishment, Handcock shines light on what Koestenbaum calls the “boulevard of moon smut.”9 He is bringing sexual fantasy out into the open in a resistance to assimilation. The underground, in other words, is not the only place for the sultry.

It is a gorgeous phenomenon when a thing you thought inanimate starts to pulse with life. Take a book, for instance. An author pours their blood into it, and slowly that blood leaks out. What was relegated to the world of objects can take on a new biology and as we handle it, a connection grows between reader and author. Handcock’s work has this same sentient quality that bleeds outside the paintings. There are humans and histories pulsing within the canvases and as I step into the room they pulse in me too. Not only does this vivacious energy stand as testimony to survival, it embeds the works in futurity. They resonate with the universality of the sexual, embodying something that no person can know better than themselves. Yet somehow, it is a thing can only be known between bodies. In this respect Indecent Literature truly is organismic: beckoning, sweating, playing, embracing. It is not a mere reference to sexual practices, but a living continuation of their beautiful politics—the paintings carry into today and towards the future. With Handcock we are not witnesses to revisionism; we are entangled in re-visioning. We simultaneously give and are given life, down on the boulevard of moon smut.