Not Gambling - Intuitive Pathways in aaGILNrsty

Upon entering Enjoy gallery to see the show aaaGiLNrsty in March 2012, it took a minute to actually locate the artworks. Lisa Martins aluminium tape trail was the first to be spotted; it had led me up the stairs and into the space. Gary Peters’ geometric paintings seemed to be hiding up near the ceiling in the back corner of the room, and Natalie Ellen-Eliza’s line drawings hovered at leg height on the left wall. At first glance, the arrangement of the works seemed pared back, minimal, and even cryptic, which after having met the artists was surprising. The works all shared a common interest in exploring line and geometry, and one could be forgiven for thinking they were in for a very serious art viewing experience. 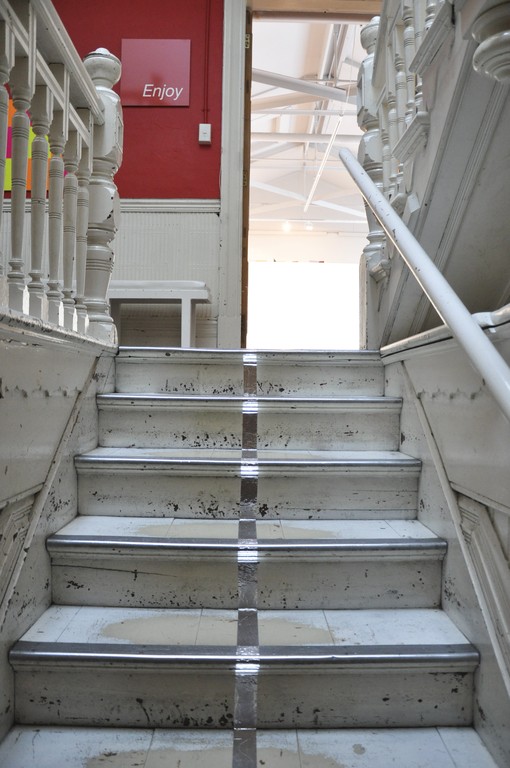 After the events of opening night and conversation with the artists however, the words nonsensical, playful and intuitive seemed to be more fitting for this group show. While each of the artists is interested in structure and control, these concepts are used more as vehicles for intuition and spontaneity than as ends in themselves.

For the opening night of the exhibition, Gary, Lisa, and Nat (aka: aaaGiLNrsty), chose to bet their artist’s fee on a horse race. This appeared to be another cryptic choice made by the artists and some at the opening were at a loss as to why they would do that. Why take a chance on that money? Why not go out for dinner instead? But this action dovetailed with the exhibition’s conceptual agendas. The tagline or mission statement of aaaGiLNrsty was “to reassert intuition and trust in one’s own process as valid and an essential way of making art”, which can often involve accepting the nonsensical, the unintelligible, and the unpredictable as powerful generative tools for art making.

The analogy of gambling encapsulates the idea of the leap of faith it takes to make art intuitively, and the possible benefits. In the late 1990’s a group of scientists at the University of Iowa staged an experiment that revealed the value of trusting in one’s intuition. Subjects were asked to play a gambling game involving four decks of cards (two red and two blue) and each card drawn would either reward the players with money or inflict a penalty or fine. The aim of the game was to draw the cards in such a way as to create the most winnings. What the subjects were not told beforehand was that the red cards, while seeming to offer large rewards, also meted out extreme penalties. The only way to continue to win was to play the blue cards, which offered continual pay-offs and small penalties, allowing players to steadily build up their winnings.

While this study revealed a myriad of insights regarding how people behave under pressure and how our brains work, one curious discovery was how long it took for the Iowa gamblers to figure out the game. It took most people somewhere around 80 cards to be able to clearly articulate what the best strategy was and why it was more effective. But it only took 10 cards before most players developed a measurable stress response (i.e. sweaty palms) when drawing the risky red cards, and it was also at this point that they started favouring the cards from the blue decks. Even by 50 cards most players had developed a strong reportable hunch, showing that their intuition had picked up on valuable information. What’s more, the players were intuitively using that information 30 – 70 cards before their logical, analytical skills could explain why the blue cards were a better idea.

What this study and aaaGiLNrsty have both sought to prove is that trusting in intuition can be a valid and worthwhile way to act. If the gamblers in the Iowa experiment had acted scrupulously logically and played even-handedly between decks, until they could lay out a logical strategy (complete with evidence), would this have helped them win? Probably not. It helped them more to listen to those instincts telling them to avoid the red decks and play the blue ones, even before they knew why. The suggestion that people’s minds can gather and use vital information and ideas before we can articulate what we know (and even before we know that we know it) is an apt analogy for understanding an intuition based way of making or viewing art.

So questions such as:

“What does horse racing have to do with this exhibition?”

“Where did this aluminium tape trail on the floor come from?”

“What do ‘choose your own adventure’ books have to do with geometric painting?”

and “What are you trying to say by drawing lines?”

are all perfectly reasonable, but it is possible that they are the kind of questions that cannot be answered. Or perhaps they cannot be answered straight away. And having those answers is not a prerequisite for making. 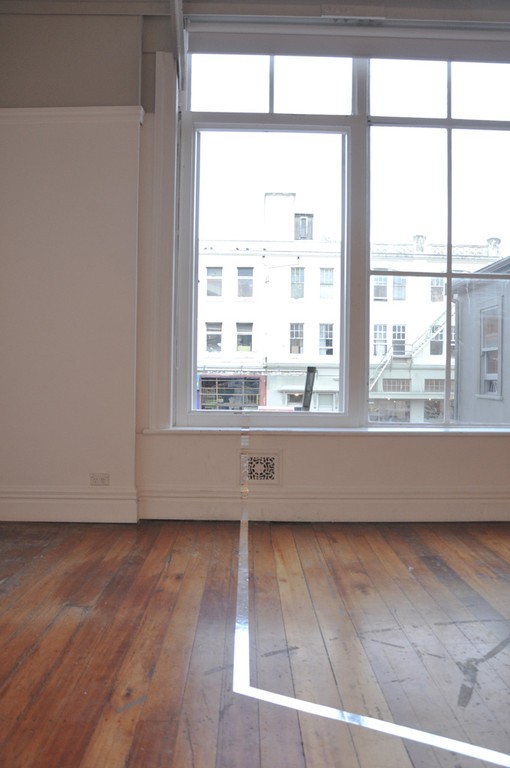 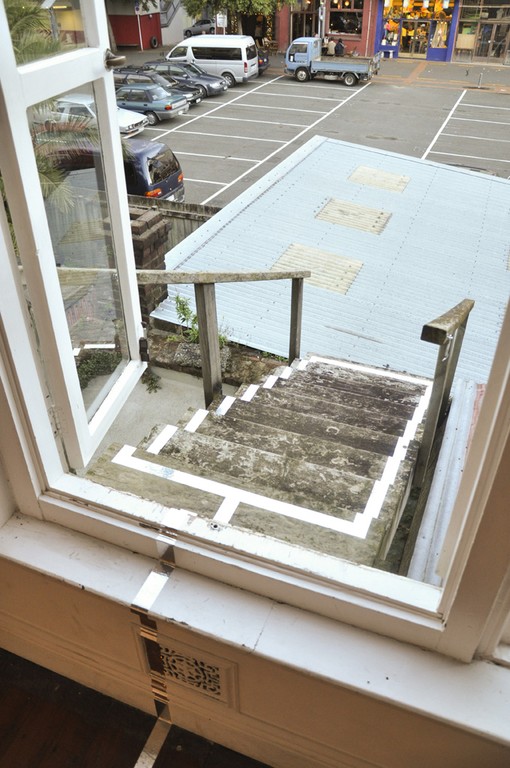 Lisa Martin’s aluminium tape installation comes from such a starting point. She has said that her work is

“Essentially intuitive and pleads with me to make it. Occasionally it will let me know why I’m doing what I’m doing, but mostly it just tells me to get on with it.”

This particular fascination with the material began when she created a trail or pathway through the Toi Poneke art studios using blue duct tape. While this was meant to be a private communication to a friend, it ended up drawing members of the public into the building, through reception, up the lift, through the studios, back down and into the head offices; an official-looking, forbidding area that people would not otherwise approach. From this random event, Lisa discovered an interest in herding the public.

People intuitively follow pathways, even overriding pre-existing instincts. So if Lisa can get the public to obey their instincts to follow a line, can she also get them to buy into the rest of her story: that the shiny aluminium trail leads to an alternate dimension? It helps to buy into the sci-fi connotations of Lisa’s silver trail and accept her far-fetched back story in order to get a full appreciation of the notions of intuitive play that the artist evokes. Yet this is a faith-based practice, depending on the suggestibility of the public as to whether they will take part and accept. 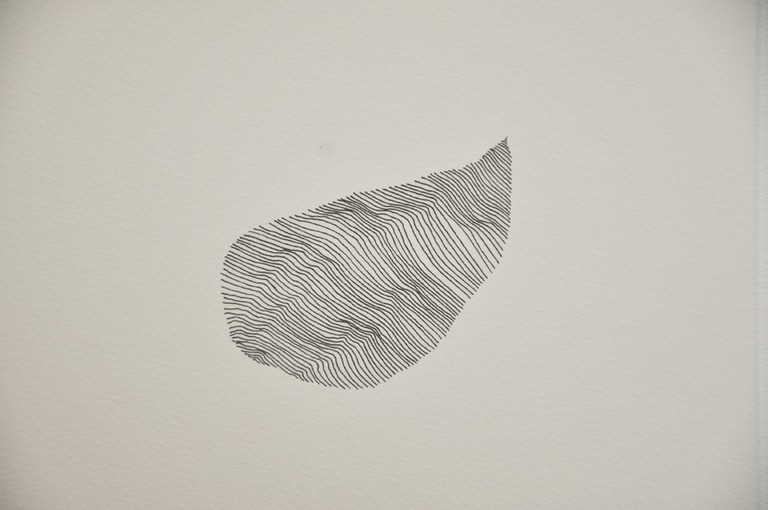 Natalie Ellen-Eliza is fairly clear on where the motivation for her meditative line drawings comes from, but for her it was a challenge to accept that intuitive impulse as valid. Having completed a Bachelor of Fine Arts (Hons) from Massey University where she developed a video art practice that was highly critical and conceptual, Natalie found her way of working at times overwhelming in its conceptuality. The demands for conceptual thinking and the connotative ramifications of any step taken in this kind of process bring a weight and a pressure that can frighten one away from instinctive, process-based art research. Natalie finds it hard to trust her intuition due to this pressure. These drawings came about as a coping mechanism, the repetition of the gesture being soothing and creating a mental escape from the more critical, feminist side of her practice.

Yet these works do not necessarily represent a departure from conceptuality. In a way similar to Agnes Martin’s line paintings, Natalie’s drawings embrace restriction, minimalism and absence in order to open up a space for sensitive expression. This is the first time these drawings have ever been shown, as part of Natalie’s quest to valorise intuition as something that is just as valid in her mind as her other work. The moment when any artist, no matter what kind of work they make, decides there is a possible gap between what is currently out there and what they may be thinking is a subjective moment of intuition on the artist’s part. These drawings correspond to that usually short-lived moment of intuition in a more lingering form, resulting in something quite intimate. 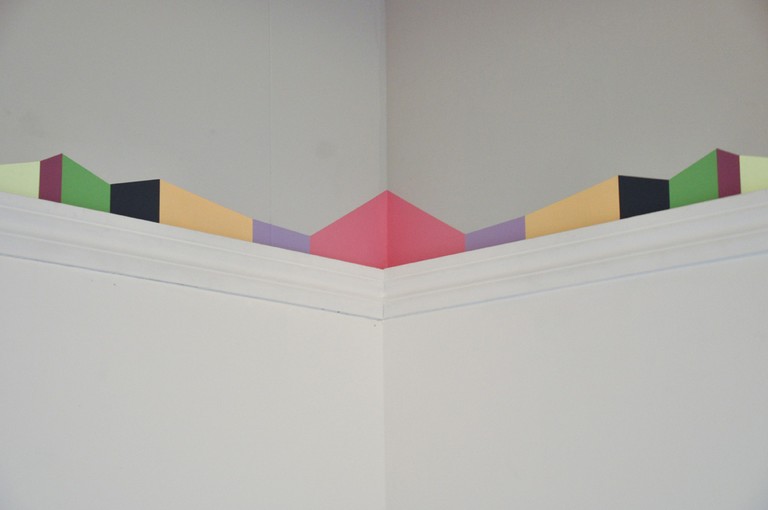 Gary Peters has trained as a painter and is much more comfortable in accepting intuitive, practice based methodology. The generative system behind these paintings is ‘choose your own adventure books’ where each step in the narrative determines the form and length of the paintings. The act of playing the books provides boundaries or limits for the work but also a network where Gary is offered choices and must use his intuition to navigate the making, accepting the element of chance in these initial phases. The strategy of inviting the element of chance into art making has been used since the beginning of Modernism in the 20th Century, when by abandoning certain elements of agency as an author, an artist creates an opportunity for themselves to react intuitively to whatever comes up. In this way, Gary’s paintings bring to mind the ‘exquisite corpse’ games played by the Surrealists, which like his paintings, were based on children’s games and relied on the element of chance. One of the appealing factors of this approach is that it opens up new pathways of investigation in that many of the decisions to do with the work’s production have been taken away or pre-planned. This means that the remaining decisions appear relatively simple, yet carry the complex and significant answers or consequences of the entire process. The way that Gary has utilised these techniques in his work creates a dialogue between chance and control, narrative and abstraction, the creative intuition of the artist and the limitations of the system he has put in place.

Sometimes the academic art context and the ever-present fear of being relegated to the realm of ‘café art’ can paralyse you. What aaaGiLNrsty seeks to do is to embrace the intuitive thinking that occurs before we get bogged down in conceptuality. That is not to say that intuitive forms of art making lack in terms of concept, but that taking advantage of an intuitive feeling even in a moment of doubt can reveal its own conceptual agendas. If we only make the art that ‘makes sense’ within a critical art context, are we more likely to succeed or could we possibly be missing out on something? Like the Iowa gamblers, following one’s instincts here could be seen as a gamble, a risk, a leap of faith into the realms of the unpredictable, but this doesn’t mean that it cannot pay off.