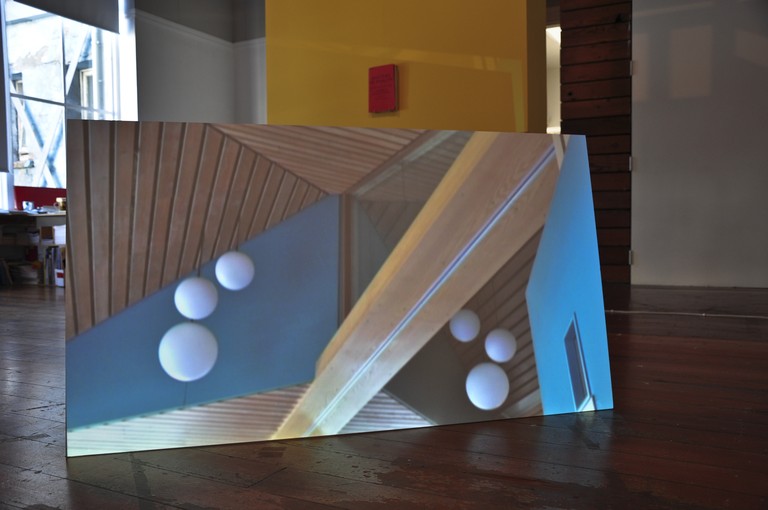 Where have we fetched up? We realise we’re in two places at once. This, of course, is somewhat disorienting. In two places or, maybe, in one place that exists simultaneously within two different spaces. All this, when you think about it, is enough to give you a headache. For this reason let us perhaps try to think how we got here; and this will, of course, mean two different stories, both of them already familiar enough to be sure.

Firstly: some castle on some hill, say—this building has long since lost its original function and, restored and expanded with the help of big name architects, has become a museum dedicated to the memory of itself, of the objects it contains and the land it oversees. Its authority gone, its once unassailable defences are opened so that the public can enter and browse its exhibitions and archive. Through these exhibitions and this archive, it retains another kind of authority—however much the items might have been collected with different purposes in mind, and however much we all know about gaps in the collection. Perhaps it has even entered, however nominally, into the ownership of the people. Enter and browse, make of it what you will; but, to tell the truth, the last light has faded from the artworks and the photographs.

The second story: the artist has also lost her original function and (if you believe Boris Groys) no longer creates but selects. In this, the artist is already a curator, the curator an artist, no-one in the gallery any different from anyone else. The artist’s private criteria, perhaps bordering on obsession, are made public through the operation of the space, and this space is delimited and further partitioned by any number of boundaries: gallery walls, book covers, the glass of the vitrine or the cathode ray tube—these are only the most obvious ones. Spaces make art, not artists.

So then a first look into the vitrine (Ruth Buchanan’s Drawing Conditions (2009)) and already we’re doubled. We might, if only for the briefest moment, imagine we are being taught something: the objects collected there are matched by their interpretive text (we’ve long since learned that text is of a different category from what it accompanies). But the text here communicates less than it offers thoughts on communication itself, on the possibilities that it is no transmission but already the result of collision and interference in which the receiver stumbles at least half-way across the divide. In the process, the objects it forgets to name are transformed into: avocado modelled in clay; the faintest drawing; the woven carpet. That is, into what they are.

* In the interests of full disclosure, this title may require some explanation. It clearly recalls the title of Kant’s foundational if ultimately ambiguous Was ist Aufklärung (‘What is enlightenment?’), as well as Foucault’s response of the same (translated) name. ‘Sei’ however is a German subjunctive form of ‘ist’, whose use here is not strictly translatable into English: this subjunctive is used to report speech or opinion, often in journalistic or fictional settings, and often with ironic effect. As such, it translates a straight declarative sentence into an ‘according to’. But, in the absence of an obvious interlocutor or interviewee, it leaves the subject of such speech or opinion unclear, empty or floating. What is enlightenment— according to whom? If that question is, in context, as unanswerable as the title is untranslatable, then here, through a mere grammatical operation, we have the transformation of the enlightenment—and indeed reason itself—from reality or historical fact into a series of opinions or speech acts, an archived, iterated and contestable record. 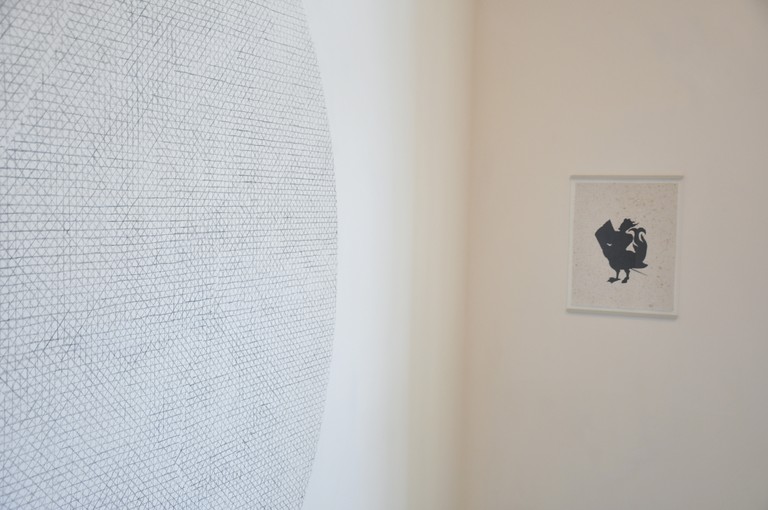 What are we, after all, being taught? The private made public is none the more clearly legible for that (stumbles across etc); and still we oscillate between presence in that great museum of reason and (we rub our eyes) the transformed gallery (where were we?), the former open to every citizen, the latter to every object (though citizens are also generally allowed). It can’t help that we are surrounded by further paraphernalia of reason and the education ideological state apparatus (if you’ll pardon my French): reading matter, helpful guides and documentary video; a wall drawing seemingly straight out of art history (but what’s that next to it, in a, yes, frame?); audio commentary...

And it can’t help that the expanded and accessible museum, now digitised and networked out beyond any castle wall, has been raided by these artists, whose private criteria and obsessions are allowed free rein. Maria Pask opens the file on Kate Millett, rearranges it and has it read aloud as soundtrack to her video piece Little Millett (2009); Marnie Slater turns to Claude Cahun and Marcel Moore in (A: Claude Cahun and Marcel Moore) (2009) (their presence, their place, fleetingly evoked vocally as absence—trace?—seems, now and then, to collapse into the author’s own). Source material is everywhere. Does it help to know something about Millett (http://en.wikipedia.org/wiki/Kate_Millett)? About Cahun (http://en.wikipedia.org/wiki/ Claude_Cahun)? Does it help to know, say, that the wall drawing within Sjoerd Westbroek’s Lines Intersecting on a Circular Plane (2010) traces twice the projected grids of flyscreens?

Although my installations suggest to be the result of study related activities, I do not intend to present knowledge as such. Rather, with the materials I bring together I want to suggest rather than represent meaning. I am interested in finding a moment in which it is unclear whether meaning is a quality of the work or a projection of the viewer. (http://sjoerdwestbroek.nl/statement/)

Ah. Stumbles across. Etc. We attend a reading at the gallery: here Lee Lozano’s dialogue piece, conversation as pure artistic event without documentation which now exists only as (to be sure somewhat minimal) documentation, retrieved from the archive and published by Bik van der Pol in an issue of their serial Past Imperfect, the various issues then reordered and stapled and exhibited here—this piece is now, along with the rest of the issue in question, read or performed (a reading or performance that is itself then documented on video). The accessibility of information; its recurrent transmission; its repeated iteration; its rearragement in space. Also as part of the reading from this issue, a list of all the films Nixon had seen while in office (as unlikely a document as Lozano’s, raising epistemological concerns of its own). Some of the longer film titles cut in two by the readers and made, seemingly, into two films, presumably a typographical effect of text spilling over the end of a narrow column. The effect is perfect, of course: the hint that surface, or should we say presence, is all that is necessary, and that the source matter in film history is irrelevant; this, however, only interrupting the inevitable mental ticks and crosses, bird-watching style—seen that, seen that (or not).

Need we go on? The invitation to follow Aline Keller’s documentary Explanation at the tree trunk (2005) is frustrated—if only we understood Schweizerdeutsch. Though, as it turns out, that would have been no help at all (not even the Swiss can understand her nonsense syllables). If we can’t do justice to all the works here (one thing certainly not lacking is information) then we notice that all those invitations—to read, to study—leave us paying attention to what we might learn and then, as suddenly (or already, or instead) thinking of the gallery space and the choices of the curator/artist who has placed this object before us.

And somewhere behind all of this we must have the fantasy that the one space is the same as the other, and that we’ve really found ourselves in a single, marvellous place after all; that the opening out, the accessibility and dissemination of information, is the same as the work the gallery does with it, or the book or video— the free play of word and image, undoing authority’s fixing. What would this mean? Each private world an encyclopaedia, made public through the gallery; a Wikipedia fantasy (and who believes anything they read there?). All this takes the accessible and makes it again accessible—is it merely transformed, yet another ostranenie?

But none of us can concentrate for very long and we get lost in the visual forms or the voice’s pure sound— is that why we wonder where we are? But by now we’re becoming more certain then ever: we know where we are without a doubt; and it’s more than one place; and our best hope is maybe that we carry on in both.