S.O.S. Save Us From Ourselves

In 2006, the media, politicians and public interest groups once again convened to debate the merits of the annual Guy Fawkes fireworks celebration. With increasing call-outs for emergency services, destruction of property and general acts of terror towards animals and ourselves, many called for private sales to be restricted or banned.

The Labour government, already tainted with the talkback whiff of the “nanny state”, warned of a possible ban should people once again act irresponsibly. However, with this particular issue it seemed the public might just agree—after all, it’s all fun and games until someone loses an eye.

Scheduled during the Guy Fawkes public sale period from October 27 to November 5, Bronwyn Smith’s Wildlife project spanned several sites around Wellington. It took the form of an installation at Enjoy, a selection of films that played on the after-hours screen at the New Zealand Film Archive, and a one-night-only detonation of the Celebration Crate on the beach at Oriental Parade.

With the spirit of Guy Fawkes being one of public celebration it seemed appropriate that Smith chose to take Wildlife out of the gallery and into the public domain. I didn’t see the installation at Enjoy – so this essay will constrain discussion to the public elements of the project.

The New Zealand Film Archive window screen on Taranaki Street is one of the latest attempts by galleries to join the growing phenomena of ‘after dark’ single-channel public video spaces. In this case, screening is daily from 7pm until 7 am. The journey past this window is a common route for those on their way to a movie, the booze barns of Courtney Place or the city council’s waterfront fireworks display.

Smith selected four film and video pieces for the window including her own Mighty Box. While Mighty Box was concerned with aesthetics and the temporal nature of fireworks, the Film Archive footage screening concurrently with her video traced historical glimpses of Guy Fawkes and foreshadowed the anarchy associated with the event today.

E.J. Brown’s 1932 home movie Guy Fawkes begins with a group of children wheeling a pram into a suburban backyard. It’s daytime, and sitting atop the pram is the Guy—a sort of bearded scarecrow traditionally sacrificed in a fiery blaze. The kids are around six to ten years old and jostle to push the pram before joining forces to haul their prey onto the grass. Perhaps intoxicated by the presence of the camera or simply unable to wait for nightfall the children spontaneously decide to attack each other, at which point their mother intervenes, and the film abruptly ends.

Thirty years later, John Bridson’s 1962 film (also black and white, amateur, silent and titled Guy Fawkes) begins abruptly with a massive night-time bonfire. Children run in and out of frame while uniformed boy scouts light sparklers by holding them to the flaming base of another firework. The camera cuts to a woman in her forties holding a pudgy-faced toddler who waves a burning sparkler and smiles at the camera. The image is immediately at odds with contemporary sensibilities, but the child smiles benignly.

Shot by freelance television cameraman Rex Wilmshurst in 1989, Hazardous Guy Fawkes Activity at Mission Bay is a dramatic shift to digital colour and sound. The film begins suddenly with fireworks shooting into the sky before cutting to a procession of cars trawling slowly through an open public area. People are walking in all directions, as if moving from one carnival attraction to the next. The ground is littered with dead fireworks. Off-camera we hear the sounds of laughter and screaming mixed with the piercing shrieks of skyrockets hurtling upwards and their distant exploding bubblewrap-like pops.

Wilmshurst records a number of memorable images. A man hands a fiery Catherine Wheel to his young child; a group of Asian youths stand by an open car boot holding burning fireworks and laughing. Someone inspects the remains of gunpowder on his burnt hand and as the camera comes up behind him, he pushes dumbfoundedly at his burnt skin. A pregnant woman walks through a crowd smoking a cigarette and two drunks start a fight.

It was put to Smith that screening this film in public might perhaps be considered irresponsible. Her decision was to include it in the programme. I guess we’ll never know whether Hazardous Guy Fawkes Activity at Mission Bay inspired anyone to new heights of reckless behavior. Certainly, no one burned down the Film Archive, and if anything it probably confirmed some people’s belief that the event is a public menace.

While these pieces presented Guy Fawkes as a social activity, Bronwyn’s work Mighty Box shifted the focus squarely onto pyrotechnics. In segments entitled Step into the Earth, Cuckoo, 10 Shot, Eye Poppin Strobes and Cosmos Smoke, a fixed camera recorded Smith walking in and out of frame to light five fireworks. Step into the Earth exploded with a dozen upward shots in pink and white. Cuckoo and Cosmos Smoke both flamed brightly. Eye Poppin Strobes had plenty of pulsing white light action to dent the retina for a good thirty seconds, while 10 Shot was a weak collection of upward shots that nevertheless illuminated the surrounding foliage in ethereal shadow. The fireworks in Smith’s Mighty Box video work are over pretty quickly. I wondered if perhaps there was a hint here of one of the home truths about fireworks—they often promise more than they deliver.

Smith put this to the test with the opening night detonation of the Celebration Crate on Oriental Beach. At the appointed hour, a group of intrepid Enjoy visitors made their way to the Parade. Smith walked to the beach. The wind blew hard. Postponement was briefly mentioned and ignored. Smith’s assistant Melanie Oliver, grimly shoved one hand in her pocket against the cold while holding the programme in the other hand, announced the name of each offering. Smith lit the fuse and stepped back. 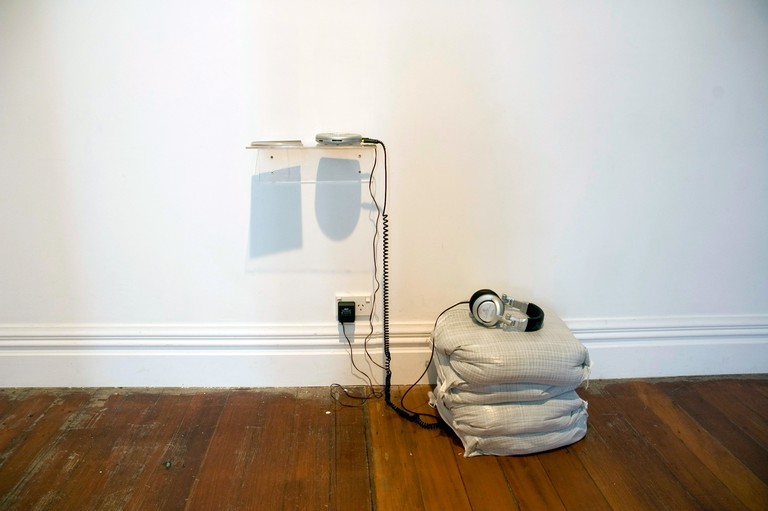 A range of explosive effects followed; from flaming candles that poured sparks upward to bright explosions that popped in series. Some fell over or failed to light, but most exploded for brief seconds in combusting showers of pink, red and green.

After each one I yelled “YEAH!” in my best Mission Bay/ New Year’s Eve leave-yer-brains-in-the-carpark voice, but sadly, none of my fellow art enthusiasts joined me in the cause. A few people passing by stopped to look and occasionally chat or smile but didn’t stay long. The odd passerby stopped to watch from a distance. At the end, we joined Smith on the beach to light sparklers which blew sideways in the Wellington wind before we put the burnt remains in the bin.

The lighting of the Celebration Crate was a good time. If the fireworks struggled to light and surge upwards in the Wellington wind this didn’t dampen the artist’s enthusiasm for the event. Luckily for the emergency services, no one got hurt and afterwards we adjourned for a cup of tea.

Walking away from the beach, I wondered what Fawkes might have thought of all this. While we host an annual celebration in his name we only have vague notions of his plot to blow up parliament. We don’t dwell on the act as an attempt by a religious extremist to bring down the state; just as Christmas is viewed by most as a holiday, Guy Fawkes is a party.
Likewise, I doubt Smith was seeking to inspire a resurgent band of Fawkes-ists to storm the Beehive with a skyrocket and a double happy. Rather, in defining Guy Fawkes as “a celebration under threat” she reclaims some of the middle ground in the debate.

Her three chosen films from the Film Archive’s collection suggest that foolish behaviour is not unique to our age. We are left to muse why law now mediates the sale of those small explosives, once left to common sense or calculated risk. Have we become more stupid or more aware of our actions?

The lighting of the Celebration Crate and the screening of Mighty Box both demonstrate that for most Guy Fawkes is a brief, benign spectacle with historical origins that are more or less bypassed by a festival of noise and colour.

On the closing weekend of the public sale period, the Wellington City Council staged its annual free public display. Watching the explosions from outside a downtown bar it struck me as ironic that the state—through the city council—should sponsor an event whose origins arose from a violent attempt to destroy it. It seems the form this celebration should take in the future is up for debate. If the banning of firework sales to the public does increase outcries over Government intervention, maybe Guy Fawkes will end up having the last laugh.