I like the idea of science for the non-scientist. It means simplifying things for those of us without the detailed technical knowledge. Science for the non-scientist works to make things less cluttered, to clear out the pesky equations and confusing words. It seeks to lay things out clearly and cleanly like washing on the line. I find it appealing that this genre is predicated on leaving bits and pieces out. The extraneous details that cluster around core theories are carefully skirted in the myriad of pop culture books that outline the theory of evolution, quantum physics and Galileo’s discoveries. I think that it takes talent to identify what is of most importance and what is not. It is more useful for lots of people to know the basic idea than for just a few people to know the detail.

Rachel O’Neill’s work explores the conflation of pop culture and science. While Hallways of Lives is particularly complicated, ideas layered upon ideas, I think the artist is also making science for the non-scientist; she is adept at leaving bits and pieces out.

Much of Hallways of Lives is built on absences. O’Neill’s works, which mull over equations and theories, are constantly dropping hints and suggesting wider, more inexplicable ideas.
While the photographs in her show hang quite confidently on the wall, seeking to explain and delineate, they are surrounded by the quiet whispering of unsolved questions. Her delicate drawings pose their papery questions. They combine symbols and ideas to instruct the reader, but all the while we are aware of the most complex ideas left out. Hallways of Lives works on this level of suggestion. While some parts seem to be self-evident, laid out clearly like the drawings on the table, I think it is most interesting in its absences and negative spaces, in its science for the non-scientist.

The works explore the construction of narrative, of scientific theory, black holes, romance novels, and innumerable other issues. Talking to O’Neill is similar to approaching her exhibition – we branch from one topic to the next, and on and on. We are talking about Barbara Cartland, about Stephen Hawkins; we are talking about eternity accelerators and archives and driving schools. There are so many ideas going on here. I make careful lists that later just confuse me. Why have I written “How do you manage” then three underscores? Tracing the trajectory of O’Neill’s thinking is to go on a long, complicated wander; accompanied by the feeling that there is always something she is not telling you. 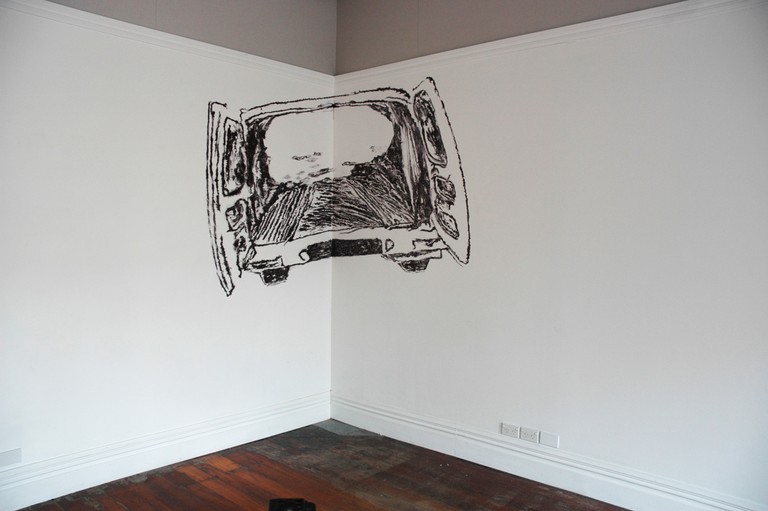 This sly humour, this sense of toying with her audience, comes through in a subtle pop aesthetic which pervades the show. O’Neill’s references to Barbara Cartland—romance writer extraordinaire, who churns out novels at an alarming rate—are innately funny. Cartland is a writer who omits nothing, and whose novels bend under the weight of adverbs and adjectives. In the show, O’Neill writes to the novelist, as a kind of muse overseeing the proceedings. Discussing “eternity accelerators” and “space catchers”, these letters combine elements of Cartland’s over embellished writing with O’Neill’s interest in space, and particularly time.

Time is a key component of this show. Its title, Hallways of Lives, suggests a duality, and a moving forward. It raises the notion of two hallways being walked at the same time, but in different spaces. This movement towards the future is compounded by the image of the car, which crops up in all of the media that O’Neill has employed the drawings, the video work, the photographs and the distinctive image of the car driving forcefully into the white space of the wall. This image brings with it connotations of movement, of progression and of acceleration into the future.

However, complicating this movement towards the future are the elements of nostalgia always pulling us back to the past in O’Neill’s work. Her drawings are pervaded with retro imagery, old style ‘learner’ plates and empty promotional promises, including: “at your service always”. Even the large hand-drawn image of the car driving into the gallery’s corner looks antiquated and clunky.

In a performance that accompanied the show, O’Neill projected old black and white footage from the New Zealand Film Archive of a baby contest. The artist gave the babies the names of car models; names such as Corona, Cortina and Escort almost sounded like plausible names for kids. However, given the age of the footage, the children would have been adults when these cars came into use. Having been retroactively branded with signifiers of the future, they are accelerated into eternity.

In O’Neill’s performance, as in her exhibition, the old and the new work concurrently. While O’Neill is looking to the future and to the potential acceleration of time she is still firmly tethered to the past. There is an image of a car in the small artist’s book that accompanied the exhibition, entitled Love letters to Barbara Cartland. The old car has the horizon line drawn in behind it; its past is clearly identified and described. The space in front though is empty and waiting to be filled. The potential of the future and the importance of the past are both outlined in this small sketch.

This is the position that O’Neill enjoys; a position that recognizes and explores two opposing positions. The artist sees no need to resolve the dichotomy of the future and the past, but instead sees how these two positions are able to exist concurrently. She is interested in examining the way in which time can arrange itself and this is where Stephen Hawkins and black holes come in, being both massively complicated and recognizable pop culture symbols of time and space.

In Hallways of Lives, the past and future are able to exist comfortably in tandem but also autonomously. O’Neill is interested in the process of opposition. Much of the show is structured around opposites, their processes of exchange and how they function in relation to each other. The drawings in the exhibition are made in duplicate but represented in Hallways of Lives by only their pink carbon copy. These works deal with the potential of negative and positive space, fiction and non-fiction, dystopias and utopias, and past and future.

These ideas are carried through the entire exhibition, expressed through video, photography and performance. O’Neill presents these dichotomous positions as problematic, but also as enormously exciting. In the artist’s perception, through the arrangement and structure of her work, opposites are able to exist autonomously and without their conflicting partner. Each negative drawing exists in and of itself, without its original positive copy to define it.

There is an enormous amount of optimism in Hallways of Lives. Unashamedly branching out over a wide terrain, both conceptually and materially, the show is somewhat of a balancing act, with a huge number of ideas constantly at play. This is an exhibition that doesn’t simply look to the future; it bounds towards it like a happy dog. That’s a slightly embarrassing metaphor, but I think I’ll finish there.