But gravity is incredibly weak. You can see that by … a fridge magnet can hold a pin using electromagnetism, and defeat the whole force of the Earth pulling down on it.1

Words conjure things into some form of being.

We talk about an art world, and—behold! Language gifts us an art world. Through the term art world, art practitioners establish a parallel ecosphere to operate within. Because it’s a reflection of the world it stems from, the art world is replete with its own histories, politics, schools, philosophies, doctrines, joys, scandals, quirks and injustices. For an artist, the art world has its own mass and gravity: at once attractive and wearing.

When I look over the founders’ accounts of starting their artist-runs, there’s a common thread of seeing gaps and deficiencies in these parallel worlds: the physical gaps of their city’s run-down CBD; the vacuum left by other artist-runs closing; the lack of opportunities if you weren’t one of the few graduates to be immediately picked up by public or dealer galleries; or, indeed, a backyard (with dying grass and a few trees) that needed reinvigorating.

They respond by carving out a portion of space from the existing (art) world to find a form of self-determination. Language, too, carves out ‘artist-run’ as a localised force of resistance against the art world’s ubiquitous force. An artist-run becomes the fridge magnet that holds up the pin against the force of this art-Earth.

Ziggy Lever says in relation to RM’s model: “We are particularly interested in artist-run-initiatives as a space of quiet resistance and contemplation […]”.2 This can be extrapolated out. When looked at broadly, artist-runs resist: they resist an historical narrative in their ephemerality; they resist permanence; they resist a definitive name,3 a simple definition or a single form. As loosely connected nodes of self-determination, they necessarily resist.

In Aotearoa New Zealand’s art world, the tension between the two forces is necessary. The force begets the resistance, but the resistance can alter force. Emma Bugden states: “Paradoxically, as artist-run spaces increasingly mimic public art institutions, commercial galleries and public institutions evoke the fragmented experimentation of artist-run spaces.”4 Emma’s observation sheds light on an underlying trajectory. As dealers and major public institutions in this country are increasingly led by curators with artist-run roots (Sarah Hopkinson, Stephen Cleland, Melanie Oliver and, until lately, Emma herself, to name a few), they take the strategies they tested in artist-runs with them. The strategies may have matured, but they begun as artist-run strategies.

The career movement of curators and artists from artist-runs into roles of seniority in the art world is an essential transition, but what about when the whole field of resistance collapses?

Where gravity is witnessed all the time (your feet remain on the ground) the fridge magnet’s force is only seen when it is acting on something else. Unless the magnet is holding itself or something up, it’s a non-descript block of brown-black (perhaps fronted with a jauntily-coloured plastic letter). So what happens when the effect of the artist-run’s force is no longer apparent? And where to from here when artist-runs are no longer the point of resistance? Emil Dryburgh encapsulates it rather eloquently:

The prodigal son [Simon Denny] offered these words in return; “the artist-run space is a post art-school marketing strategy”. I felt the wind knocked out of me, every romantic notion I’d ever attached to artists autonomy felt squeezed. Damn you Denny! We’re not all cunning and garden parties. But I must confess, as most eventually do, that Denny was onto something. The ‘marketing strategy’ of artist-run spaces has now been synthesized into the broader arts ecology, turned into a conduit between the art school and the dealer.5

The lecture Dryburgh quotes Denny from was held at Elam, and has reached something approaching folklore. I have heard several versions, but all have the same ring: opening an artist-run is a necessary part of a successful art career.

Such an enticing doctrine for setting yourself on the pathway to art world stardom! The artist-run, in the form a marketing strategy, is a conduit to success! But like all doctrines, it too easily takes a hacksaw to the parts of life and experience that don’t fit. It recognises all the glory and none of the grit: all prospects, no daily reality.

Artist-runs are, obviously, artist-run. Artists do not strive for mediocrity, even though many end up being mediocre. Whether successful or not, there’s always the intention of pushing boundaries, of being or doing something different from all the rest. This, logically, must flow to their artist-run activities. Very few will be stellar. Some will be remarkable. Most will fade. And that’s just fine. But if the intention of the artist-run is only as a reverberation of the hollow clang of careerism, it seems a little bleak. Dryburgh (more buoyantly than me) continues: “C’est la vie, artists will just have to think harder if they want to antagonize the existing hierarchy”.6… 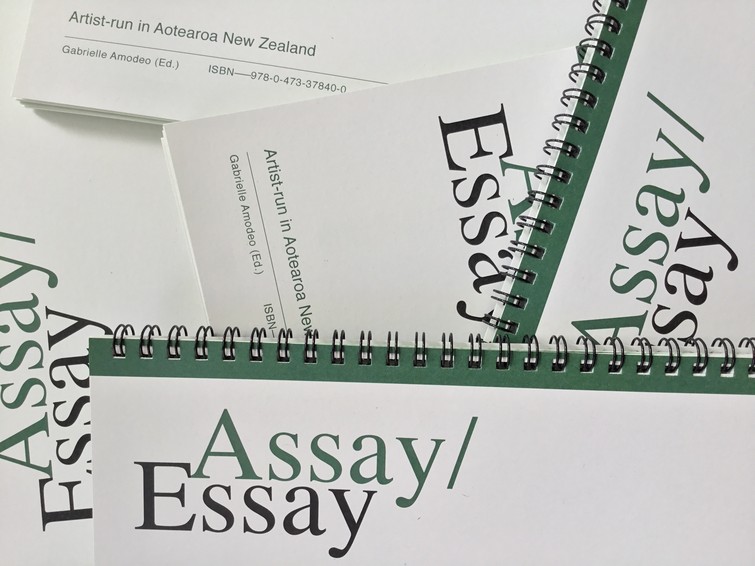 With contributions from founders, trustees, curators and observers of artist-runs, Assay/Essay teases out some of the rich area that comprises New Zealand's past and present artist-run activity, showcasing how invaluable artist-runs are to art in Aotearoa New Zealand.