Following the publication of his second book Incredibly Hot Sex with Hideous People: Diary Comics, our Communications and Publications Manager Louise Rutledge interviewed artist/zinemaker/lecturer/father/comic-diarist Bryce Galloway to discuss oversharing, feminism, PBRF and how a book of comic panels is edited. 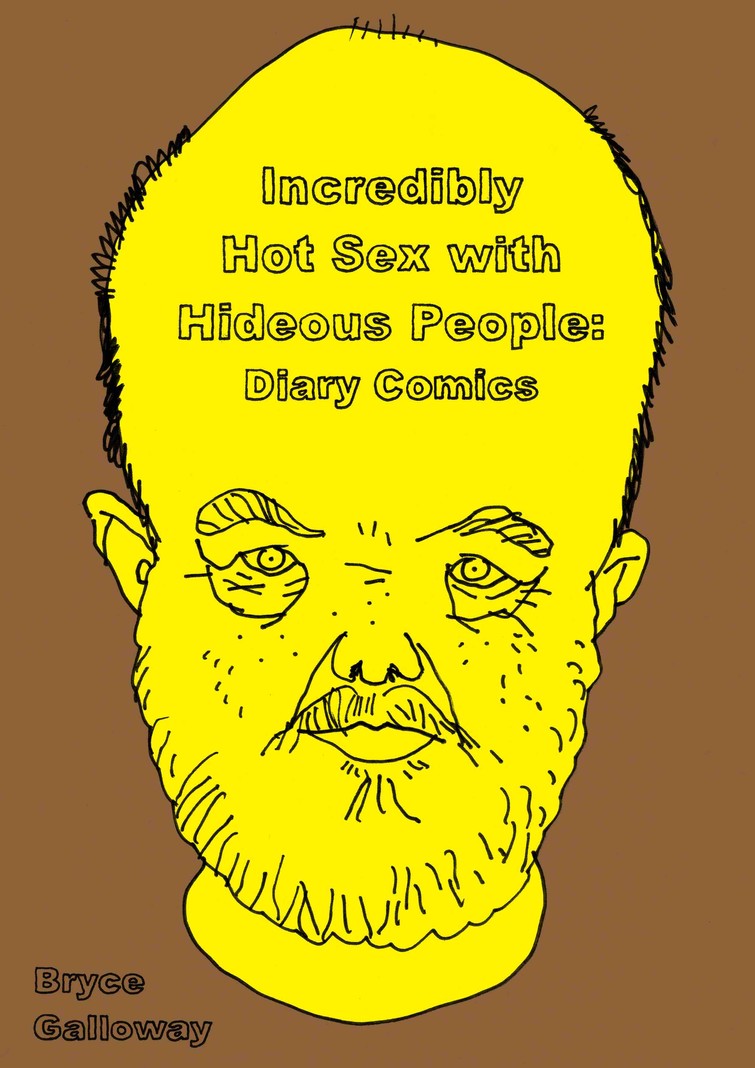 Louise Rutledge: In the intro to your book, editor Tessa Laird includes a short disclaimer: “In the spirit of full disclosure that Bryce embodies, we are, indeed, friends, thus this is doomed to be a nepotistic and syncopated piece of writing; continue at your peril.” I feel like I should also include one, as I’ve known you for a few years now. You tutored me at uni, one of your twelve bands played at the Enjoy Sixteenth Birthday Party and we’ve stayed in touch over the years. One of the things I remember you saying to me at uni is that you were embarrassed when students found your zines. Do you still feel that way?

Bryce Galloway: Yes. I don’t feel embarrassed when anyone else reads my zines (though I prefer to not be in the same room at the time), but a certain amount of respect might be favourable to the lecturer/student relationship. I worry that access to the everyday “loser” moments I detail in my zines might have a student thinking, “This loser’s got nothing to offer compared to the untarnished art stars in the next studio.” But I’m not worried enough to curb my inclination for “worst foot forward” autobiography.

LR: I always felt that—particularly when talking about things ‘art related’—you showed things as they were, not as they might be imagined. There's a certain comfort in that! When looking through the book, I found myself coming up with a lot of invasive queries about your personal life. Do you feel like people get to know you better reading Incredibly Hot Sex with Hideous People?

BG: Absolutely. I’m not as TMI in my interpersonal relations as I am in my zines. I think I’m a fairly open person, but there’s a certain amount of buttoned-down Presbyterian self-containment in my family that I won’t have escaped. And then there’s the fact that the comic narratives for the zines are produced in real time, so no doubt reveal certain unforeseen subtexts once compiled into longer form narratives.

LR: How did you decide what would go into the book? Or was it every diary comic you have produced over the last 12 years?

BG: Ha, every diary comic over the last 12 years would come in at about 670 pages! No, the book is a comparatively modest 120 comic panels plus a few full-page drawings. I edited the full archive down to 180 panels and then, in acknowledgement of the fact that I am perhaps too close to the material to be the best judge, I sent those 180 panels to Tessa Laird for her to make the final selection.

LR: In her intro, Tessa also frames your work as feminist in its disregard for the boundaries between public/private, home/work, family/art. Do you see your work and this book fitting within those conversations?

BG: I never thought of my work as feminist until reviews from Tessa and Rebecca Rice circa 2008 pointed this out. I’ve owned this since. In 2011 I curated a show called Typical Girls for the Film Archive, having noticed a certain self-effacing comedic bent amongst a group of Wellington-based feminist artists.1 Their clowning-to-camera was not unlike the tactics I employed in earlier video installation Daddy Doo (also Film Archive).2 For whatever reasons, these women feel more like kindred spirits than my male art peers. The group Fantasing [composed of female artists and musicians Bek Coogan, Claire Harris, Sarah Jane Parton and Gemma Syme] grew out of the Typical Girls project.

LR: What kind of editorial process was there with a book like this? Did the results surprise you?

Pretty much it was just close liaison between myself as an artist, Tessa as editor/essayist, and Matt Emery of Pikitia Press as designer/publisher. Matt gave me free rein to do what I wanted re: scale, length, order, and I gave Tessa free rein to say what she wanted in the intro essay and to make the final selection of comics. The results didn’t particularly surprise me, but then, I haven’t read the book, at least not in its final form, back from the printers. Is that bad?

LR: I don’t think so? What is it that makes the ‘diary comic’ different from other parts of your zine?

BG: Diary comics are just one of the things I do within my zine. Sometimes I write personal essays on parenting or other themes. Sometimes I collect anecdotes about celebrity sightings and pair these with “tribute” CDs to various pop icons. Other issues will function almost as catalogues to bigger art projects, e.g. Courtenay Place light boxes, or four songs played twice—last year’s attempt to realise twelve bands in twelve months… 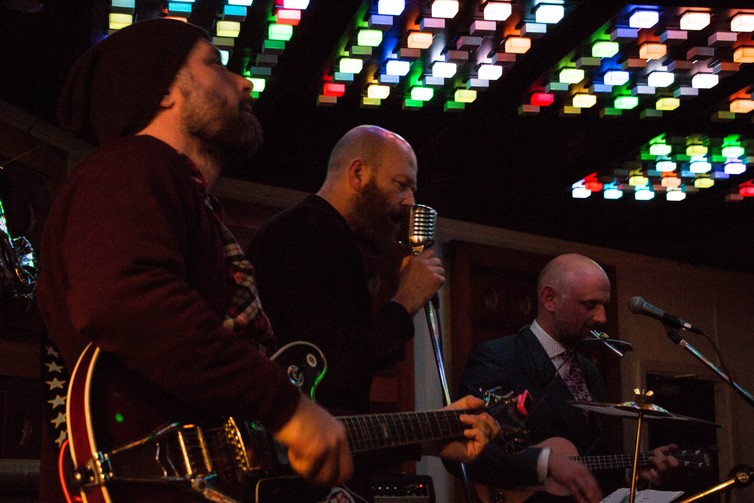 LR: One of my favourite pages in the book is from 2008, the list of ‘things you won’t do’ that DW (then your ‘defacto wife’) wrote about you. By the time I met you—and much later in the book—a lot of those things had changed. What was is like looking back and comparing all of these moments from your life?

BG: Sometimes the meta project has felt like an ode to attrition and compromise detailing the process of becoming 'respectable' or 'successful' or just becoming old and not very punk. Over ten years ago (in zine #28) I mused that vasectomy, marriage, and making Senior Lecturer (in that order) were the next changes most likely to upset my Gen X cynicism. All those things—and more—have come to pass. Really, I’m very lucky.

LR: Do you find that people really empathise with you when they read your zines or the book? You’re not one to romanticise or overtly celebrate those achievements—those ‘milestones’ just become another part of the everyday drudgery of normal life.

LR: This is the second compilation book you have published. What is it that attracts you to the hard copy format? And how different is the process from your usual way of working?

BG: It is a similar process stretched out over a MUCH longer period of time. Letters in search of a publisher were sent off three years before the book came out, whereas one of my zines might be knocked up in days.

My first book was released under the hammer of PBRF (Performance Based Research Funding); a system whereby all of New Zealand’s 5000 university lecturers send exhaustive CVs to the government every six years detailing their research (as artists, scientists, economists etc.). The universities then receive additional funding based on their staff’s PBRF performance. Quality of research is largely measured against the size of the 'gate keeper' who allowed you a research platform (gallery, curator, publisher etc.), so zines (self-publishing) are worth nothing to PBRF. The first book was an attempt to wrap some PBRF legitimacy around my DIY efforts. But I enjoyed the results more than expected, seeing the book travel internationally, garner some review dialogue, make its way into libraries etc. Books travel in another (additional) orbit.

LR: I was going to ask if the book was part of your PBRF, as the acronym is mentioned in Laird’s intro and comes up a lot throughout the pages.

BG: As suggested above, this book is definitely a big part of my PBRF. It’s legit! It’s CNZ funded! It has an Australian publisher! It has someone with doctor’s initials on the final edit and introductory essay! Excuse me, I think I just threw up in my mouth a little bit.

LR: Glad to hear you're pleased with the result. And to finish, are you really that cynical?

BG: Yes. But not without love. 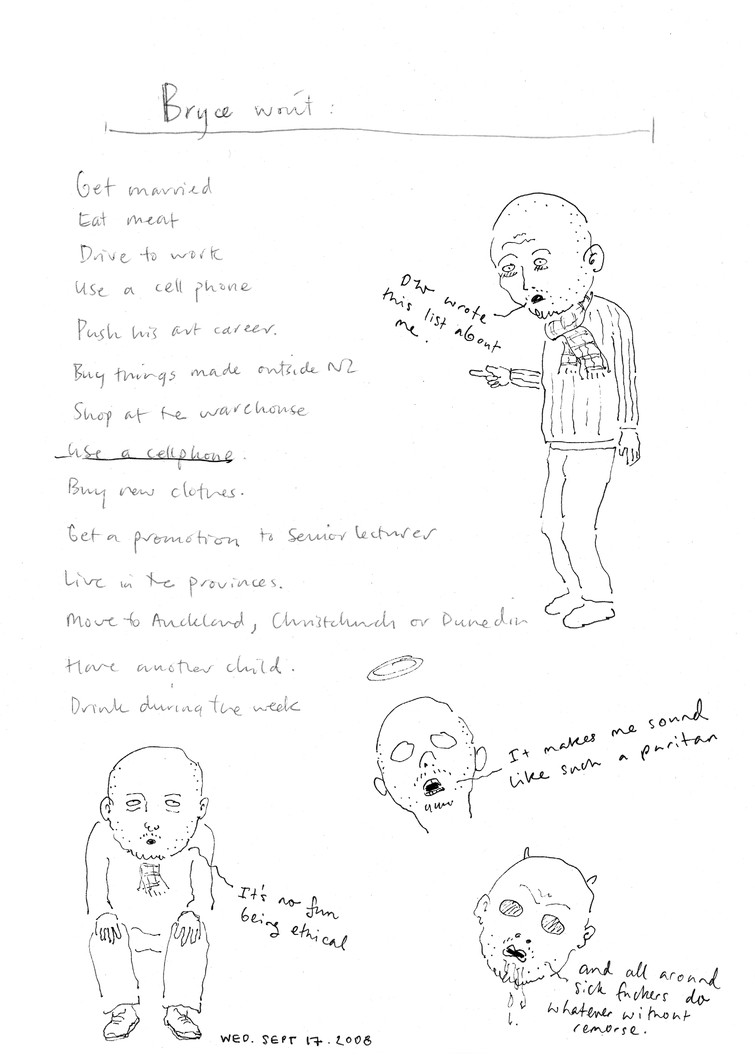 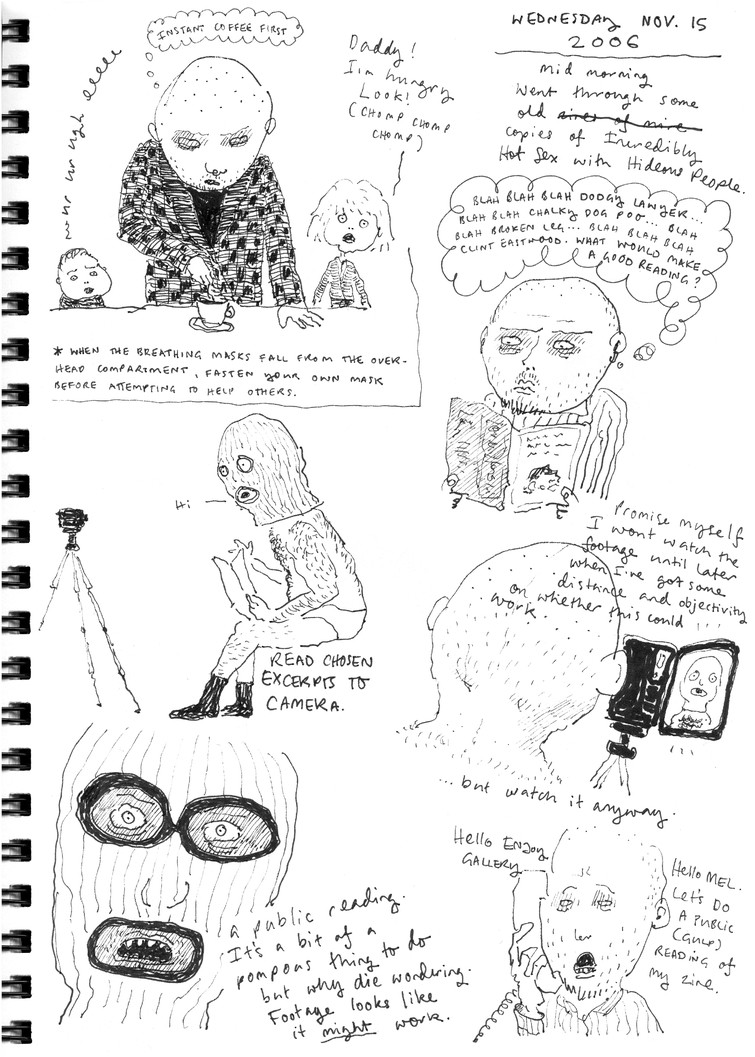 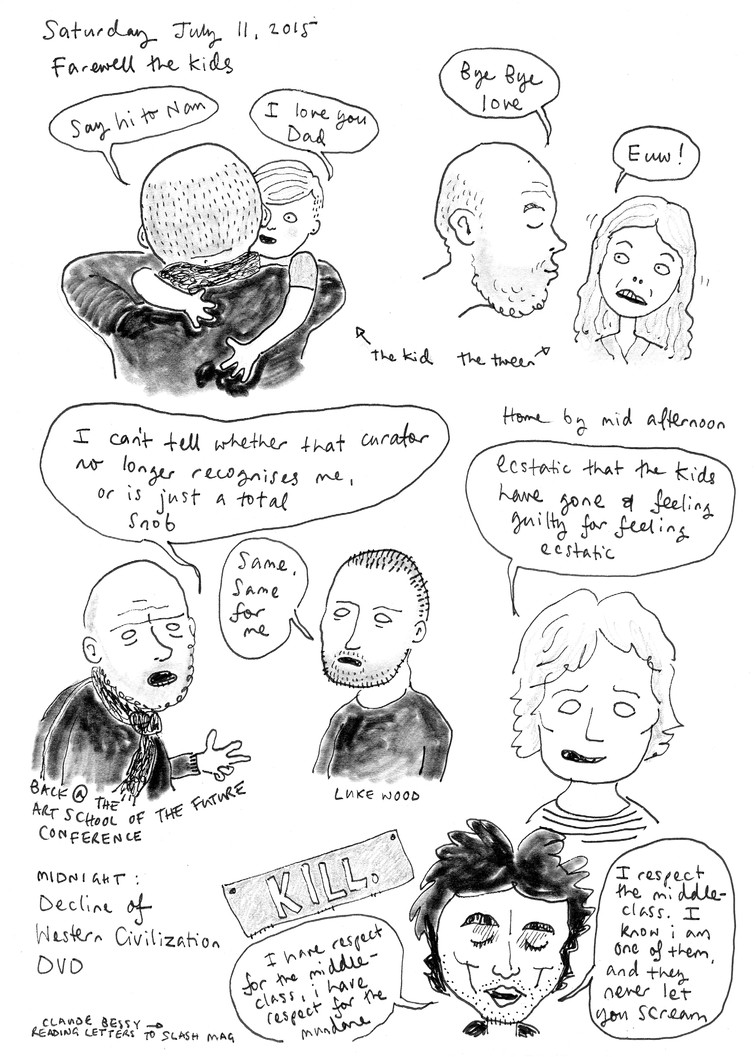 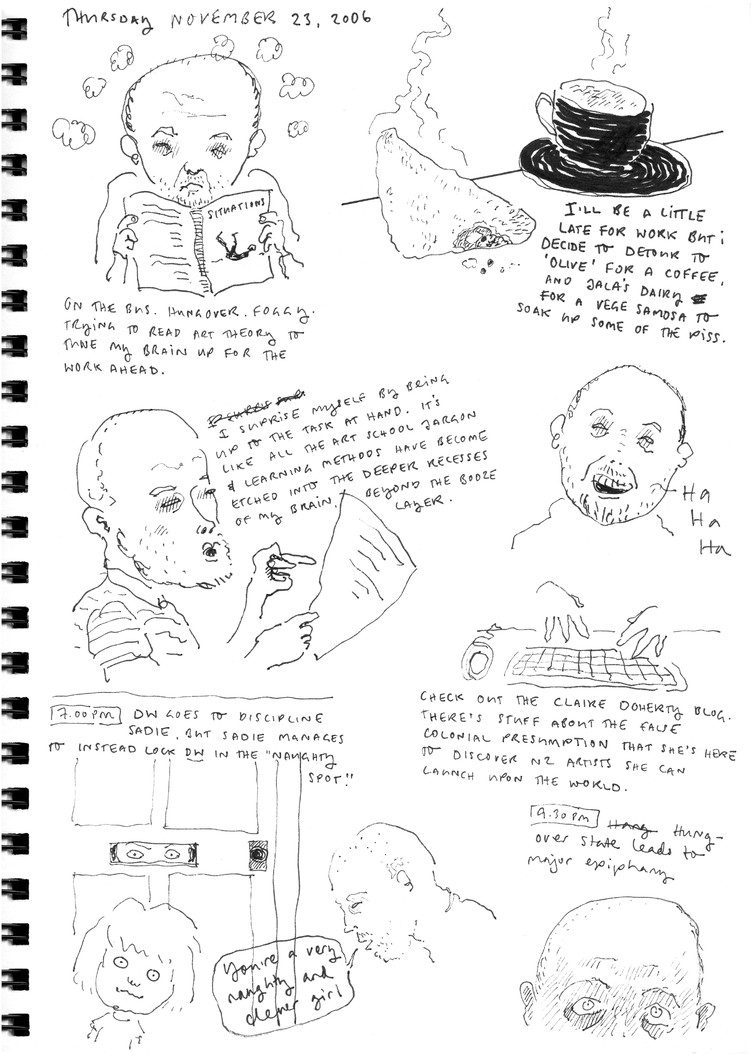