Earlier this year we announced Eleanor Diaz Ritson as the Enjoy Contemporary Art Space 2022 summer resident artist. Four weeks into her residency at the Rita Angus Cottage in Thorndon, Enjoy’s assistant curator Tom Denize paid her a visit to see how her residency was going and bring some light to the inner workings of her practice. 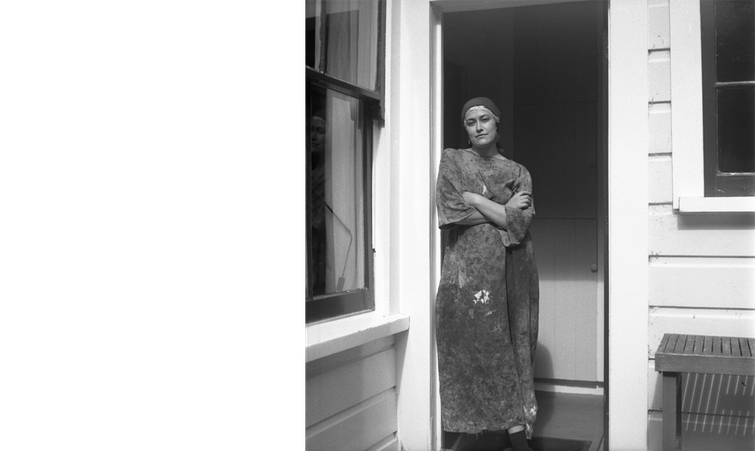 Eleanor in the back door to the garden at the Rita Angus Cottage, 2022. Image courtesy of Tom Denize

TD: So, you’re about 4 weeks into the residency now, how’s it all been going?

EDR: It's going really well! I flat in Newtown so I'm glad that, as someone living in Pōneke, I was able to apply for this residency. I tend to hop between here and my flat, but definitely spend more time here. This place has given me space to think and to make without any interruption from flatmates or family or anything like that. Having a studio on my own has been incredible, and also having a whole house and garden to just be in, there’s something freeing in that, something that’s really assisted my creative process.

TD: Yeah that isolation or I guess just being alone in a house can be something that’s super liberating you know? Not feeling like you’re stepping on anyone's toes or that there’s going to be prying eyes on what you’re doing.

EDR: For my work at Exposure last year, I had to make the Brothers painting in the living room of my flat while locked down with seven other people. I noticed that I reverted to some of my old painting habits. I felt incredibly stressed at the time. People were constantly walking through and seeing it at uncomfortable stages and commenting on how it looked as well as my progress and stuff like that. It was always kindly meant but I didn’t actually want to hear any of that! I just wanted to focus and work and decide on my own if I actually like what I’m doing or not.

TD: Absolutely, that’s one of the things that I often struggle with, being in a large studio space with lots of other people. I guess I've just come to realise that I really dislike being watched, I often find that I'm putting works in progress up and then taking them down when I'm not there because I just can’t cope with the idea of people seeing it in that state while I'm not there you know?

EDR: For sure! In my second year at Massey I used to turn my paintings around when I wasn't there so they would face the wall. But in saying that, even though the living room studio in lockdown was less than ideal, it taught me to be less precious and get over it. But having this private space has been such a nice contrast to the last time I made a body of work. 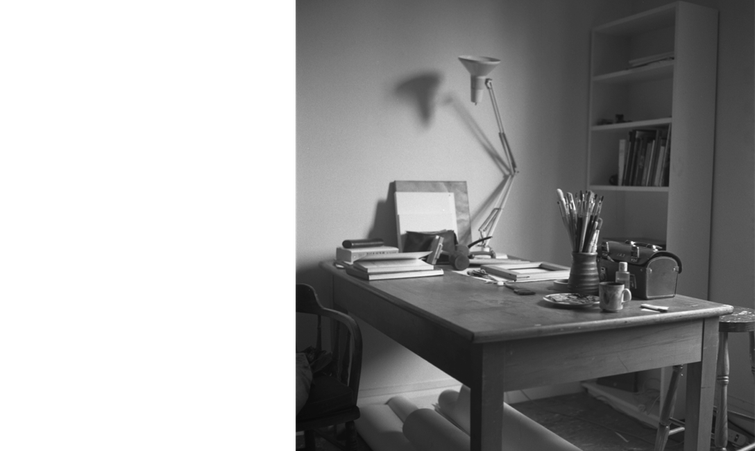 "The bodies in my paintings are rock-like, if they were to grow and move how slow might that be? It may be a response to the stressful pace that life takes on, things are constantly hitting us, constantly changing but when I’m painting and thinking about time and my body through these bodies, everything just slows down and I can think more clearly and more deeply."

TD: I’m so glad to hear that it’s given you that space. In terms of this new body of work you’re currently working on, I'm interested in the connection you make between geological processes and your process of painting, I find that sort of interplay super intriguing.

EDR: Yeah, it’s not very scientific. As much as I love rocks, I'm not a geologist, and I guess when you look at my paintings the rocks aren’t really rocks. They feel like rocks and they’re rocklike in character but they’re definitely not specific types of rock. I’m most interested in the mineral processes of rock and other earth-materials and the connectedness of minerality to body and skin surfaces as well as fabric. These paintings, they’re all of the same essence. The way I think about geology has evolved. I used to look at it in a more scientific way as an entry point toward understanding time and movement, but from there it’s taken a more philosophical space in my work. When you consider time through the lifespan of a rock, it immediately slows everything down. The bodies in my paintings are rock-like, if they were to grow and move how slow might that be? It may be a response to the stressful pace that life takes on, things are constantly hitting us, constantly changing but when I’m painting and thinking about time and my body through these bodies, everything just slows down and I can think more clearly and more deeply.

TD: The concept of transcorporeality comes to mind when hearing you talk about that, this concept that we exist far beyond the bounds of a mortal coil and that as humans, we are constantly transposing into other matter, metaphorically and literally.

TD: And your recent paintings that I’ve had the pleasure of seeing are just so evocative of movement and feel like they’re capturing just glimpses of quite ephemeral movements and moments rather than embodying the essence of stillness that I feel a lot of paintings do; of course, your paintings are of still moments that have been captured but these depictions aren't purely static, what draws you to the sort of compositions you’re working with currently?

EDR: It’s all these things crossing over in terms of pace and place. I've been trying to describe the kind of world these paintings exist in, people often ask “Is this a real place? Is this a dream?” and I don't actually have a straight answer, to be honest. It’s not a real place but it’s not a dream, and it’s not entirely surreal either. In painting movement—not as a motion-blurred body but rather a surface that is alive—I’ve found that I start thinking about the animated essence of material. It’s a seemingly still thing but it’s not, it’s always moving, it can alter with your perspective. And I find it immensely satisfying to paint figures. I used to get a lot of flak for being a figurative painter, but I’ve just had to become comfortable with the fact that I'm so in love with the body and with expression and gesture. 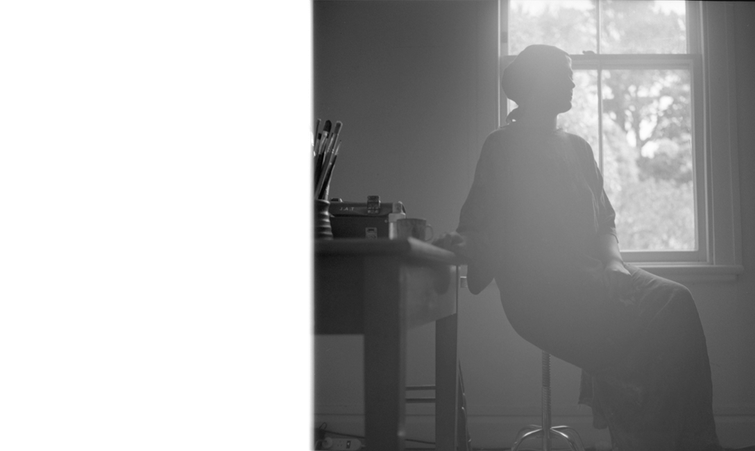 Eleanor through the studio window, 2022. Image courtesy of Tom Denize

TD: I've always found it so strange with the majority of figurative paintings that I see there just isn't any evocation of movement you know? You’re depicting a body and our bodies are not static so I guess when I see your work it’s just so refreshing in that way to see this beautiful expression of movement.

EDR: For me, I'm actively trying to step away from seeing like a camera. It’s so hard. When I first started painting I was just trying to recreate photographs, not in a photorealistic way but it felt like I was seeing everything through this crisp digital eye. It’s taken me a long time of actively unlearning that and deciding that I don't want to see the world how the camera lens does. I think this is where the otherworldly aspect comes into my paintings. None of the landscapes or spaces where my paintings are set makes sense. There’s enough that does make sense such as gravity—there’s a down and there’s an up—and there’s shadow and light, but the light sources never quite line up with the shadows. The contours of the landscape and the skies in my work feel more imagined that real. There are of course some aspects of realism, for instance in the figures, but not in a purely photographic sense.

TD: Yeah there’s this interplay happening between I guess fantasy and reality, leaning far enough into this idea of the fantastical that the reality side of things can shine through amongst the otherworldly.

EDR: Yeah there’s definitely a sense of something real. What I identify with or latch onto isn’t accuracy of detail but something far more ephemeral and emotive, something that stirs inside.

TD: For sure, and in terms of the writing aspect of your practice, I was wondering how it connect up to the paintings for you? If they connect up at all?

EDR: I really struggled to articulate what my paintings were about, especially when I was in the midst of creating them. So poetry came about as a means of re-encountering the work from a refreshed vantage. My paintings are quite autobiographical but not in an explicit way. I paint myself in these figures, and so I suppose I find direct access to that through poetic narrative. I find so much freedom in not having to finish a sentence and expressing something in a sideways kind of way. The writing exists hand in hand with the paintings, not always directly referencing the exact narrative that the paintings elicit, but there are always bits of both in each other. For me it’s about expanding on an idea via a different medium. 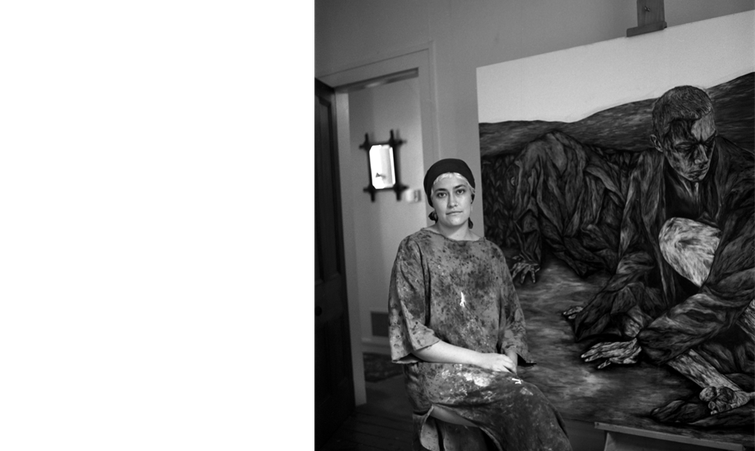 Eleanor with a work in progress, 2022. Image courtesy of Tom Denize

With her residency now having concluded, Eleanor will present an exhibition project at Enjoy in late-2022.