At the closing of Ziggy Lever's solo exhibition Document Scales, join us in Enjoy for a conversation with him and Enjoy's assistant curator Tom Denize. 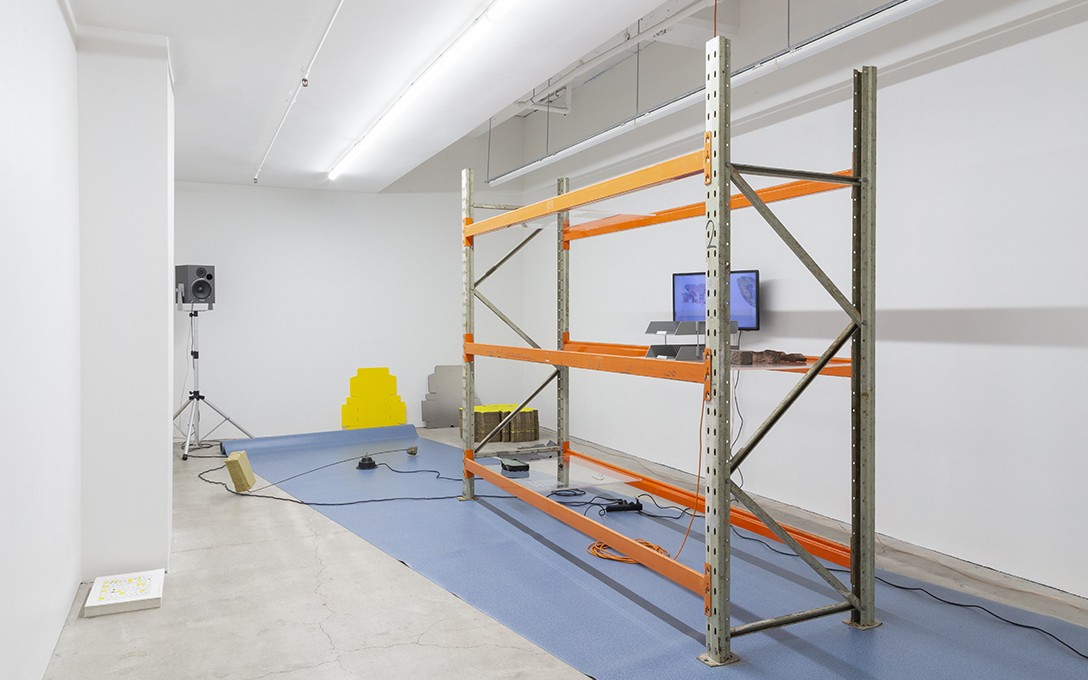 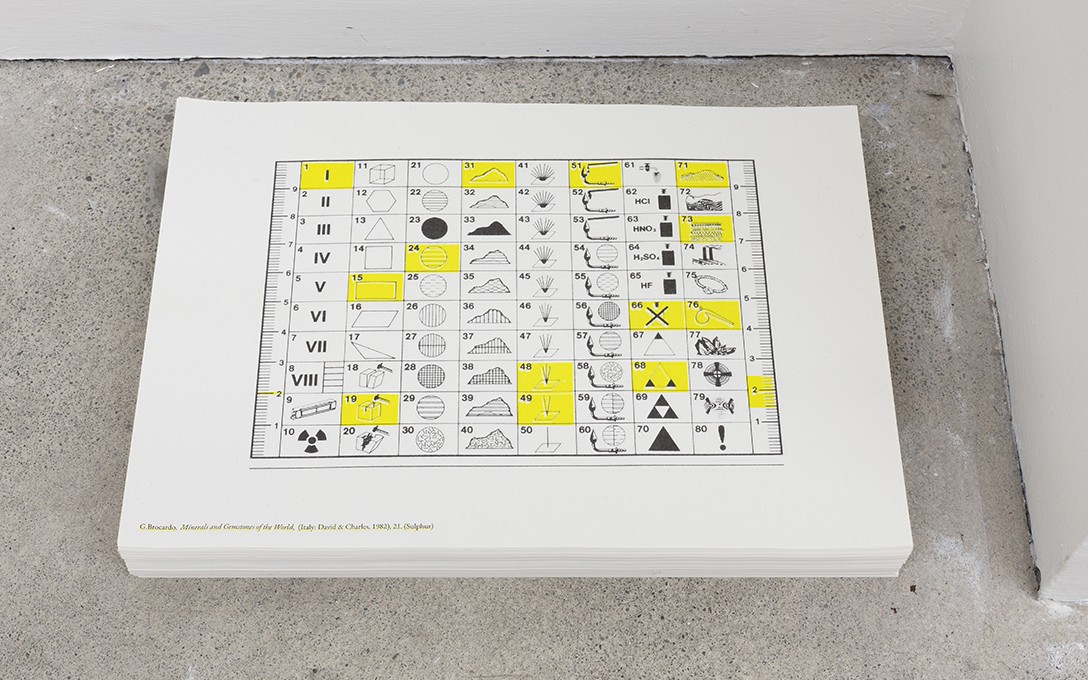 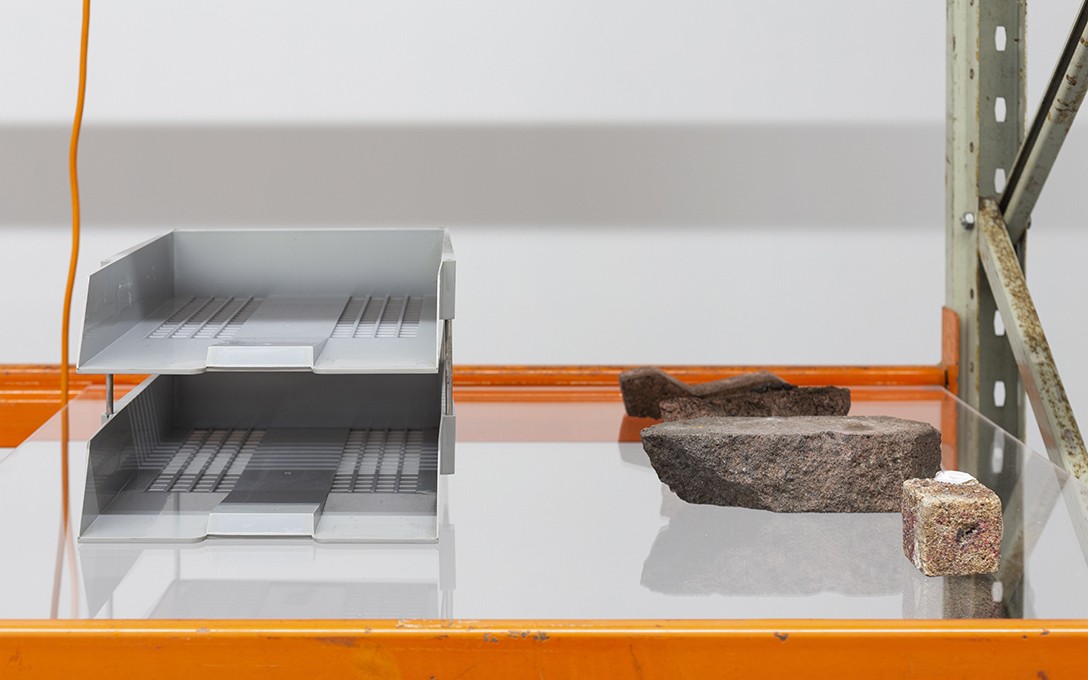 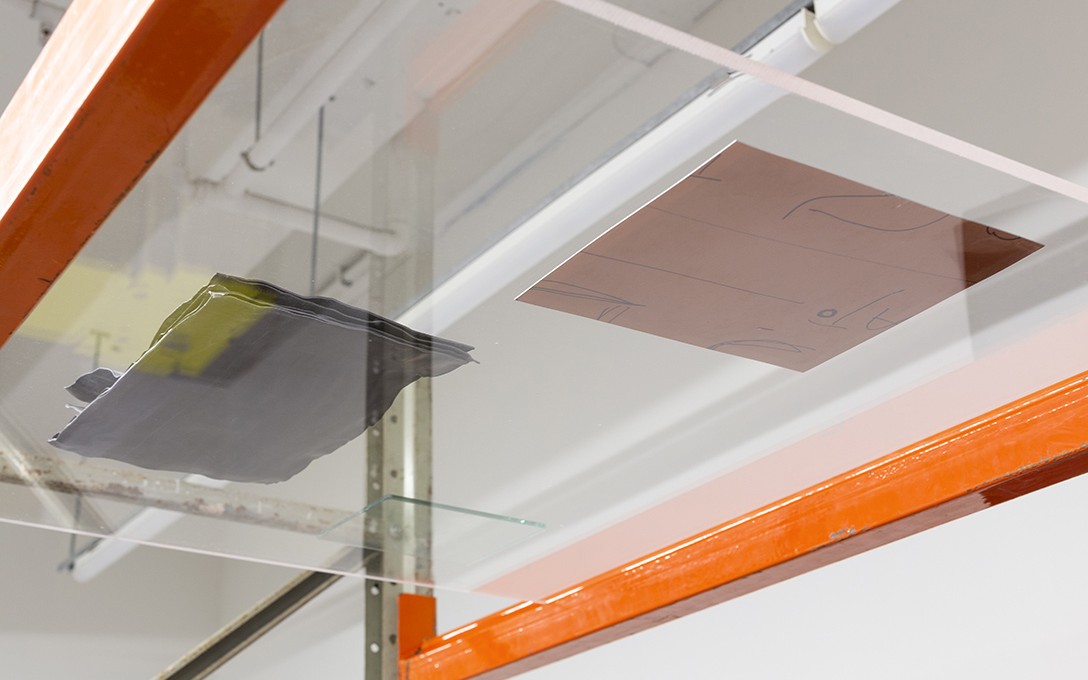 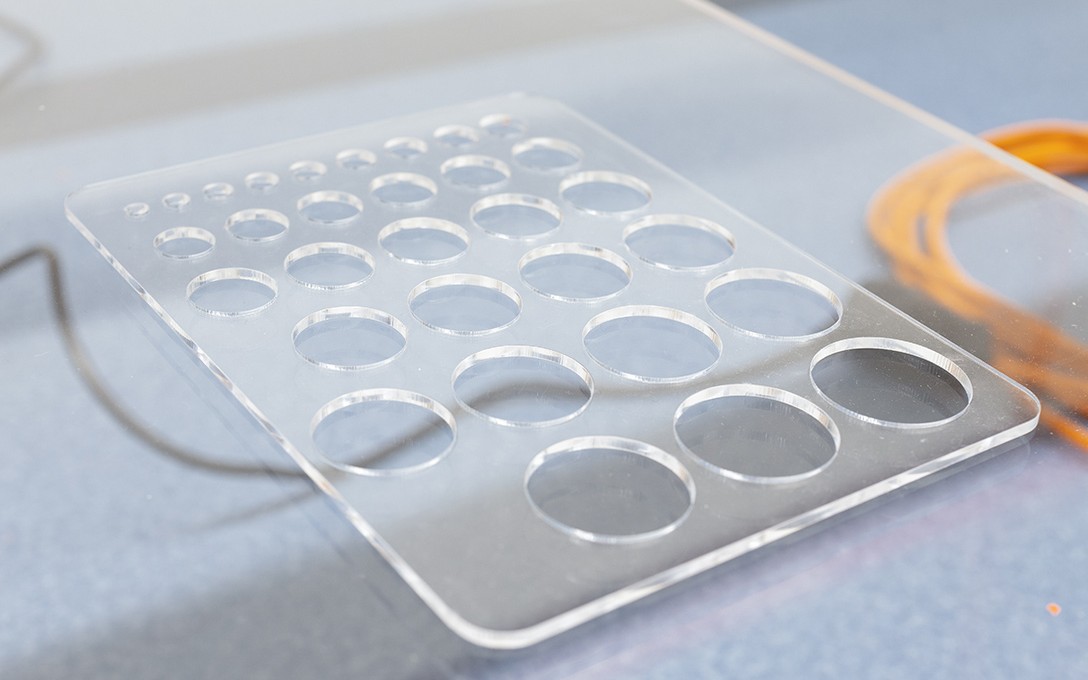 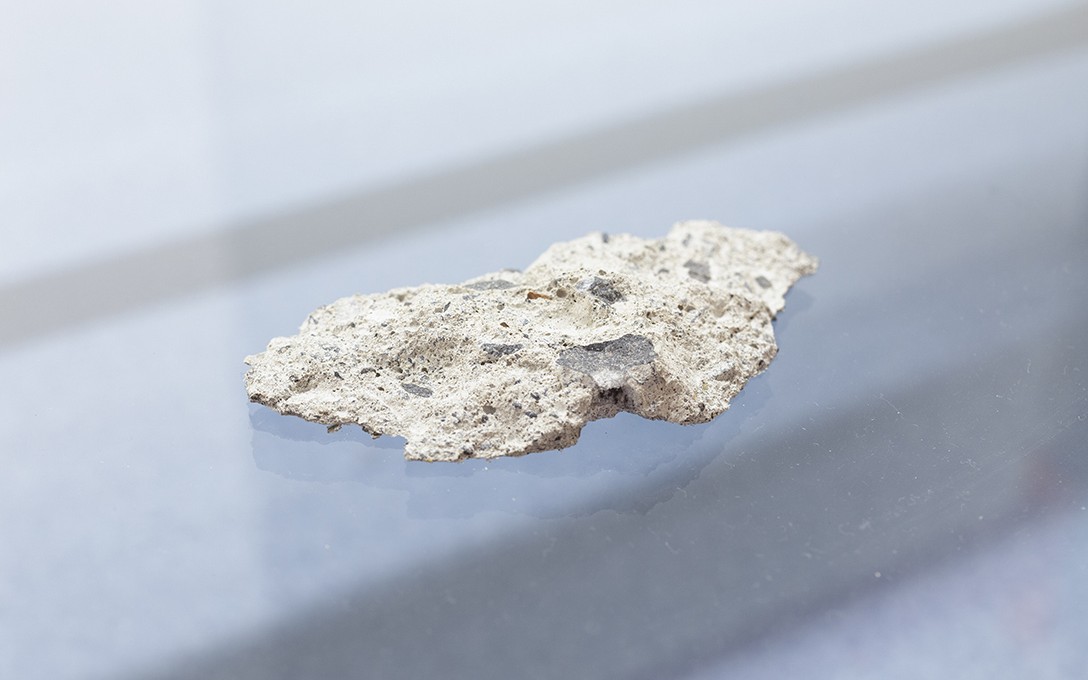 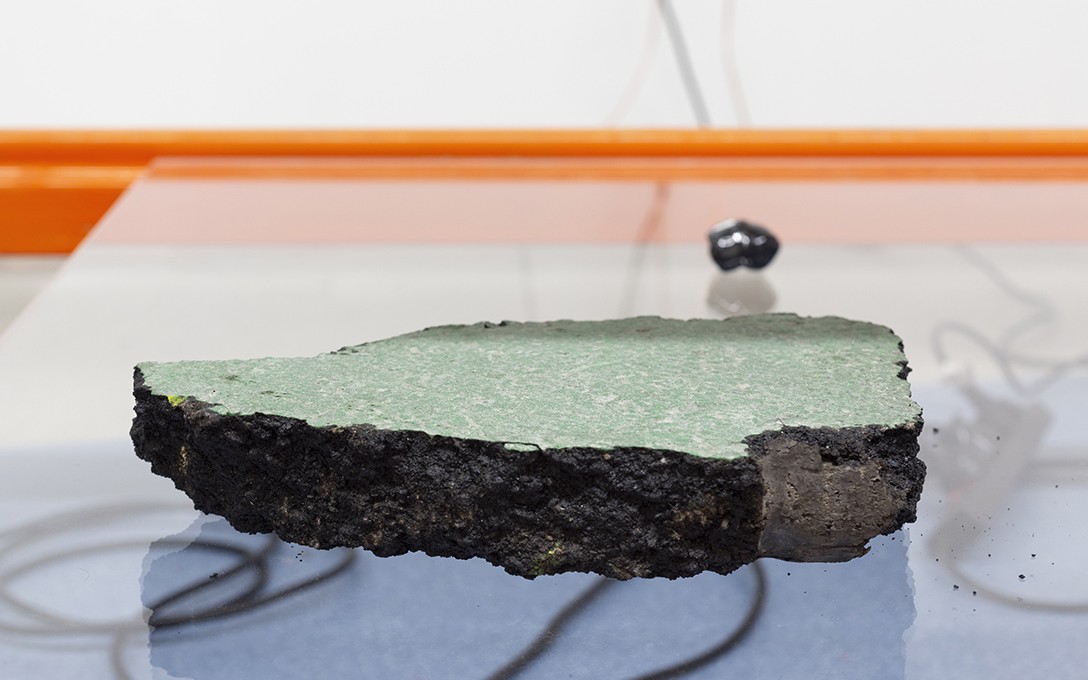 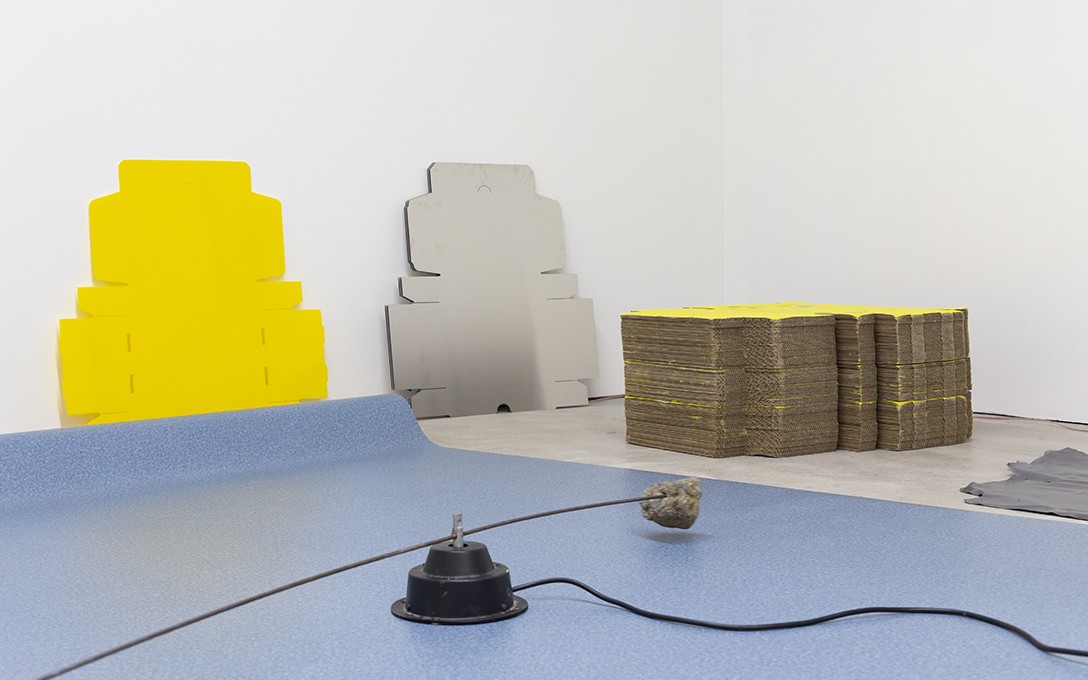 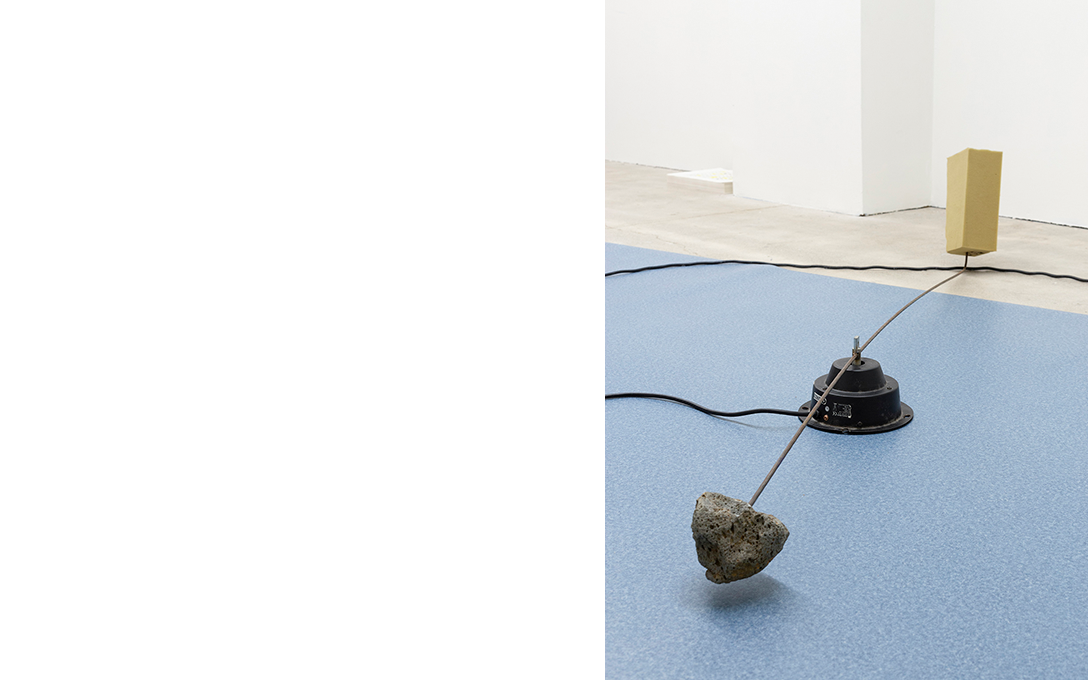 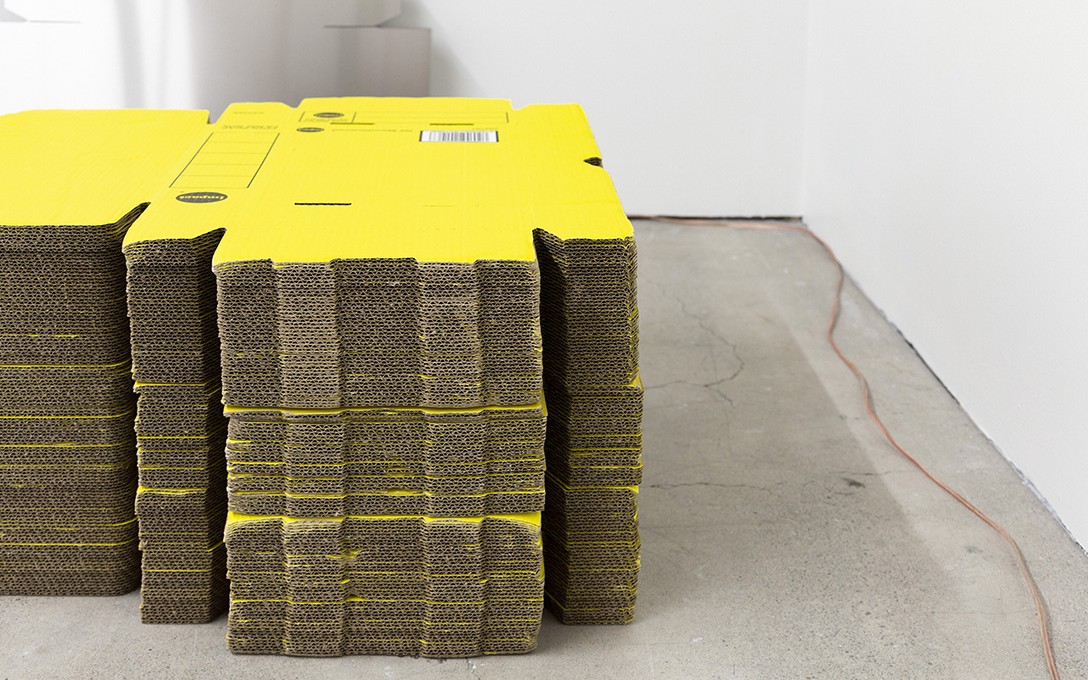 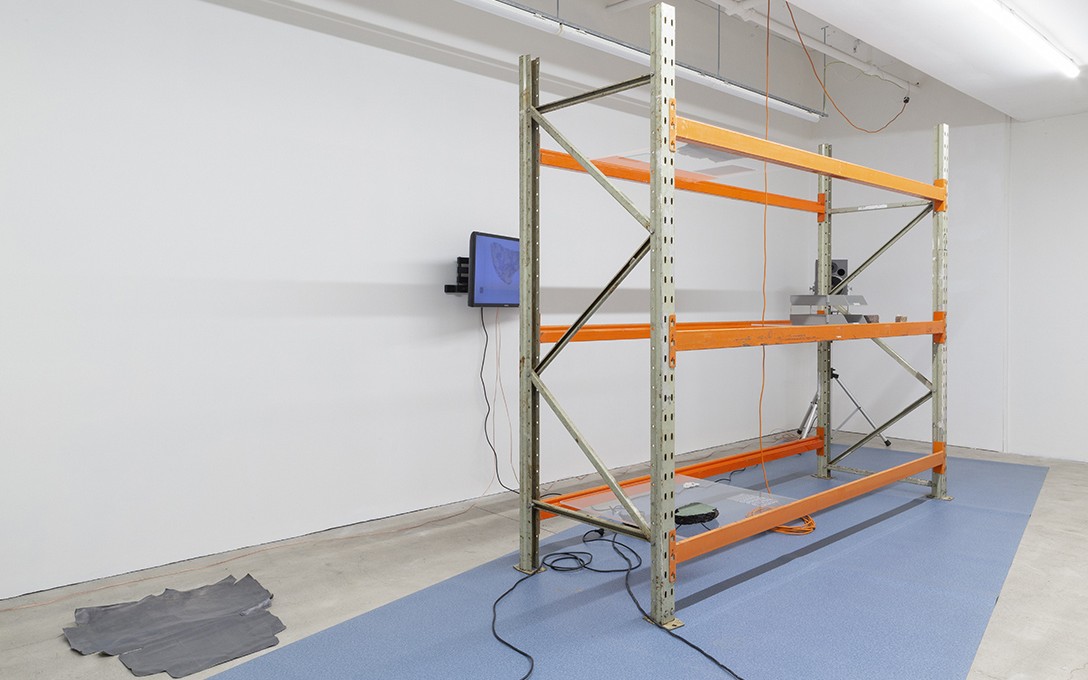 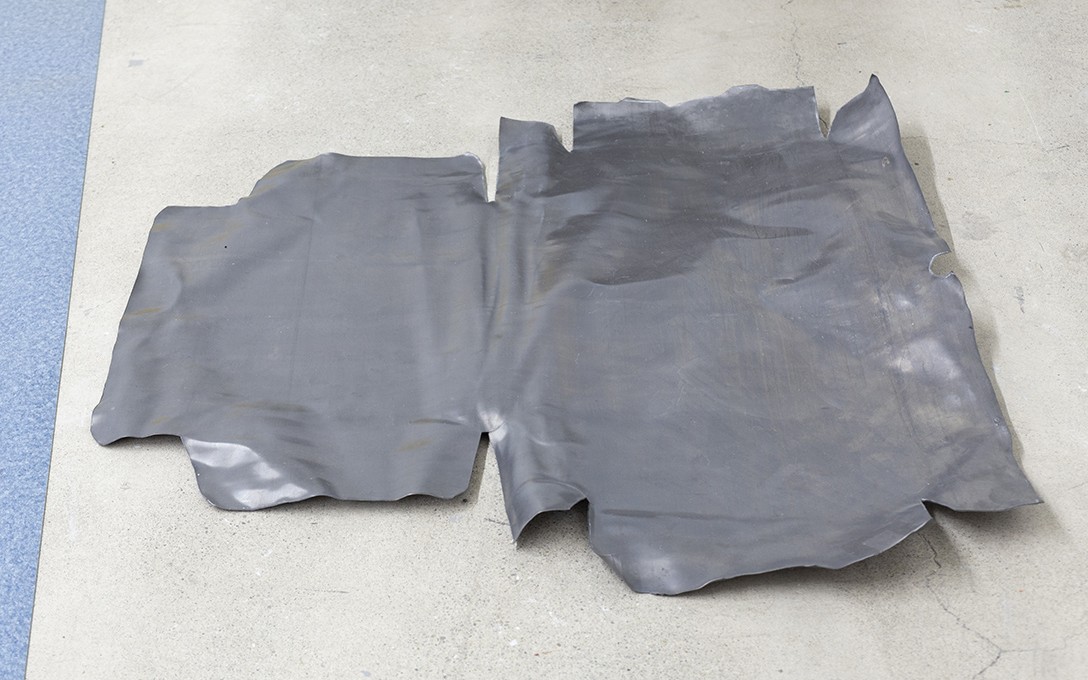 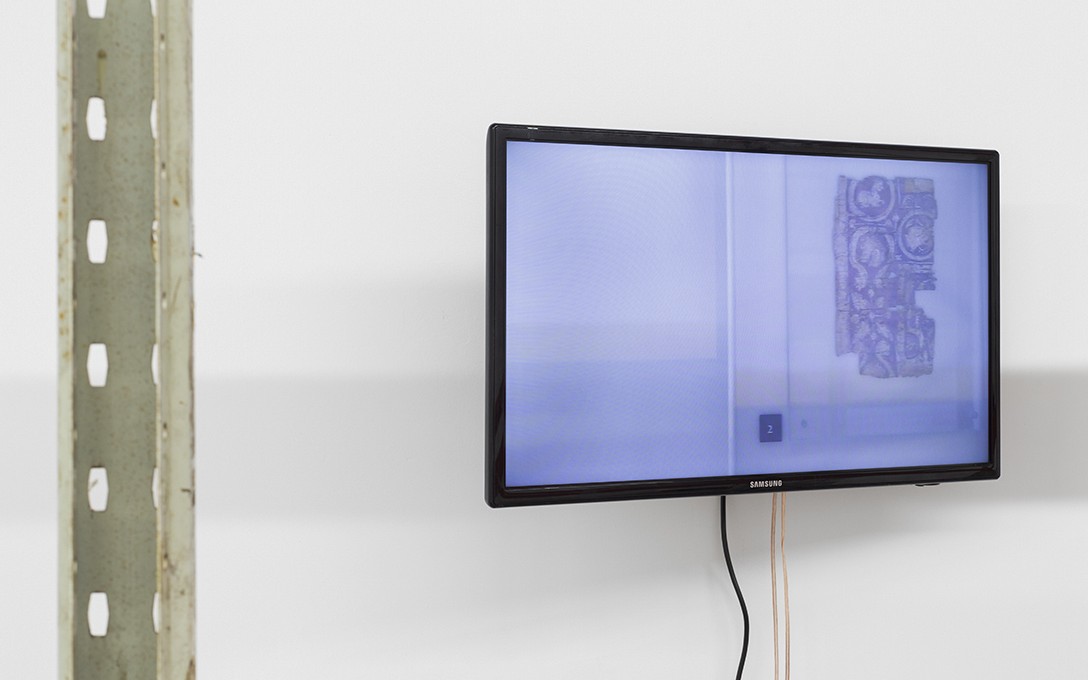 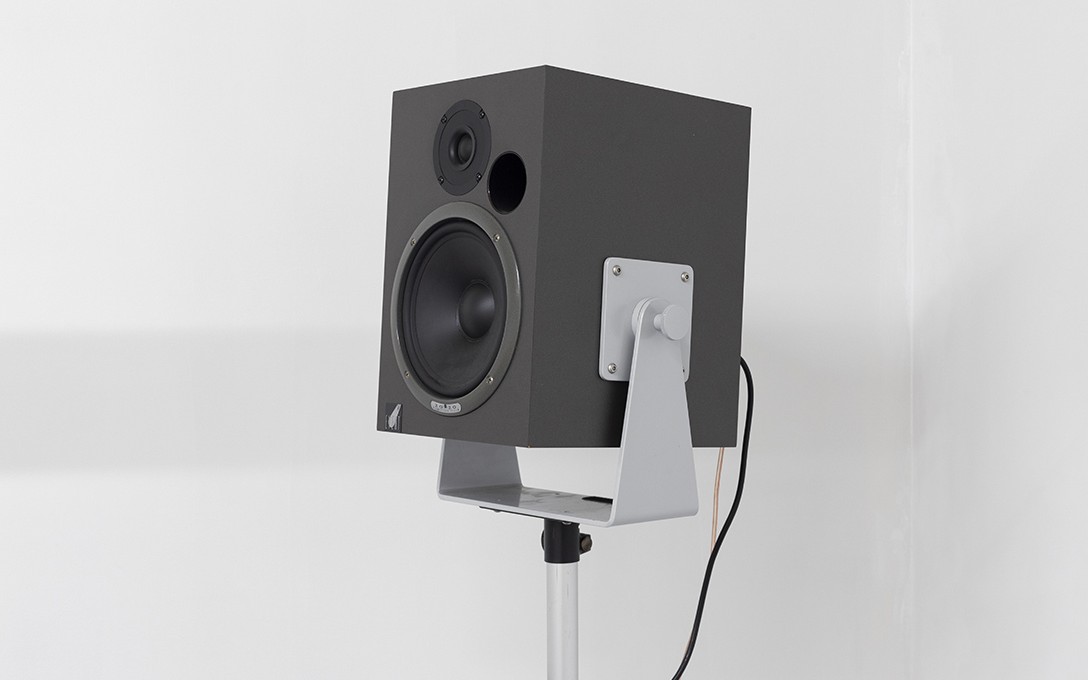 “blue rock” lino flooring (10x2m, partially unrolled), powered speakers and stands (grey), foolscap filing boxes IMPACT (cardboard yellow unfolded and stacked), foolscap filing box nets (aluminium, acrylic, lead), replica cabochon sizing guide (clear acrylic, from memory), extension cord (orange), pallet racking (steel, orange beams, green uprights), concrete removed from Enjoy Gallery floor (front room), document IN tray (grey, two levels), lead sheets (cut to foolscap folio 8x13”), half-room lights, photographic darkroom contact print glass (finger prints), aluminium sheet (orange, pen marks), cube and other “NOT-ROCK” objects found at Sulphur Beach, Tāmaki Makaurau (oyster shell, concrete), black glass (plaster drip), shadow aligning with video (at times), acrylic shelves, foam (green, circle), steel rod, counterweight, motor (clockwise rotation), oscillations and counter oscillations produced by the interaction of rotating steel rod and extension cord, quake wax, speaker wire, extension cords (black), Neues Museum Slides (digital video 4:05mins, 2019), WALL TEXT COPY: DRAWER 4: ART. The interest of the Greeks for Fine arts is demonstrated by the formulation of lists which, besides enumerating the most famous works of art and nature, also name sculptures, architects and painters (1). Designs and paintings are likewise attested on papyri and parchments (2-6). Some of these served as designs for weaving (2, 5, 6). DRAWER 3: MATHEMATICS AND ASTRONOMY. Arithmetic and geometry were strongly developed in Egypt (2) because of the importance of land surveying. Different levels of knowledge including higher mathematics (6) are attested by school texts (4), manuals and arithmetic tables (5,7). Mathematics was also the basis for astronomical calculations in order to ascertain the position of planets (1) and to compose horoscopes (3). DRAWER 2: SCHOOL. The pupils in Egypt had to copy letters, words and numbers as well as literary texts in school. A demotic papyrus preserves the earliest example of an alphabet (3). Written accents placed between the words, to facilitate the reading, are preserved on a school tablet inscribed with verses from the Iliad (5). Knowledge in writing and drawing could be applied in the administration, but also for the creation of reliefs and inscriptions (1,2). DRAWER 1: WISDOM. Teachings (1-4, 7) communicate the ides of behaviour and action according to the divine righteousness (Maat). They often take the form of a letter or of a text addressed to a son or a pupil. Such concepts of wisdom also found their way into non-Egyptian texts, as for example the Wise Words of Achiqar (6). The Dialogues of Plato also deal with ethically sound behaviour (5)., stereo sound of visitors to the Neues Museum (northern wing) and objects coming into contact with steel structures momentarily during installation (2019-2022), asphalt from outside ST Paul St Gallery, Tāmaki Makaurau (green loading zone), risograph prints of tables from G. Brocardo, Minerals and Gemstones of the World, (Italy: David & Charles, 1982) on pages 2. (Meteoric Iron), 8. (Galena), 16. (Hematite), 15. (Magnetite), 21. (Sulphur), 40. (Turquoise), 72. (Beryl), and 145. (Copper).

Lever holds a PhD in practice-led visual arts from Auckland University of Technology. Lever was a co-director at RM Gallery and Project Archive between 2014 and 2017. He is a current member of the Substantial Motion Research Network (SMRN), and of The Observatory Project. Selected video works can be found on CIRCUIT.