I was interested to hear that vagrancy is one of the key complaints from anti-dOCUMETA factions, of which there are several. So I decided to visit the Hessian city with no concrete plan beyond seeing a lot of art.

Now that dOCUMENTA (13) has run its course, this guide to finding alternative sleeping arrangements during the event might also be considered spent. But think of the many other international art fairs on the calendar and their inherent similarities. And so I'll go ahead and share these notes, anyway, in the hope that the same logic need only be adapted to suit any geographic, climatic, social, political or other specificities.

The dOCUMETA (13) website recommends spending at least two days in the city. The long haul traveller will most probably have organised accommodation, which relative to the cost of flights, costs little more than a drink at the bar. But for many trying to make it to Kassel from other German or European states, you can expect to spend at least as much at the closest Pension than you would have on your railway tickets. A number of 'sleep projects' are organised by artists and groups in the alternative scene to provide cheap and basic beds around the city for your more adventurous visitors. A lucky run on Google may land you at one of these, but otherwise you'll have to be in the know. Couch Surfing is also an option and the people of Kassel do offer their couches openly. But these alternative options are also in demand and some may find it necessary to take the idea of 'alternative' to the next level. 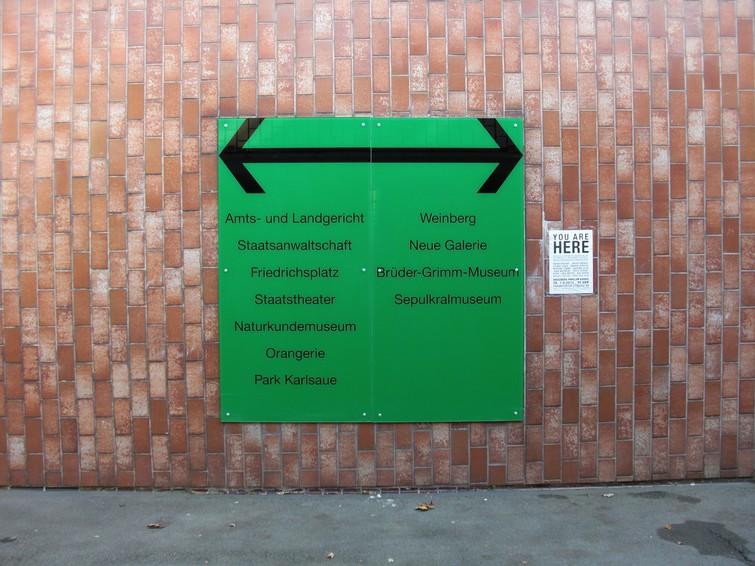 Firstly, Kassel is no ugly city as any German will tell you. It's no uglier than your average new world city. And besides, less beautiful cities are much easier places to blend into. Most notable in Kassel are the many and beautiful parks and open spaces that some have called a post-war rejection of history. As well, the multitude of venues you'll make your way around will cleverly guide you through the more interesting parts; from the Baroque to the industrial and somewhere in between. And, if you keep your eyes open, you'll find a number of potential, alternative sleeping arrangements on the way.

Germany is well known for its balmy summer nights and comparatively low crime rates, which both make for good rough sleeping. A conservatively sized blanket, the green dOCUMENTA guide book as pillow and you're away. And not to worry, as long as you can produce a valid ticket you can leave any such items in one of the many Garderobe (coat-check) stations, free of charge.

Karlsau Park is a good place to start. The artworks are well dispersed and often shut up inside detached wooden huts. The time spent finding, and waiting in line to enter these huts is an ideal chance to have a good look at the park's surroundings. There are a good many idiosyncrasies as you may, or may not, imagine a 'geometrically ordered pleasure garden' to have. But there is a security presence around the artworks and during the night the main gangways are popular until the early hours. Best to avoid. The composting area that Pierre Huyghe's work inhabits should also be avoided due to potential invertebrate activity. Best of all would be the south-western corner of the park or in one of the more forested side areas. A late evening visit to the audio work by Janet Cardiff & George Bures Miller and early morning German delicacies from the Park Imbiss (hot food stand) the next morning, are two clear advantages. Remember to mark your place on the Park map as a point of reference. 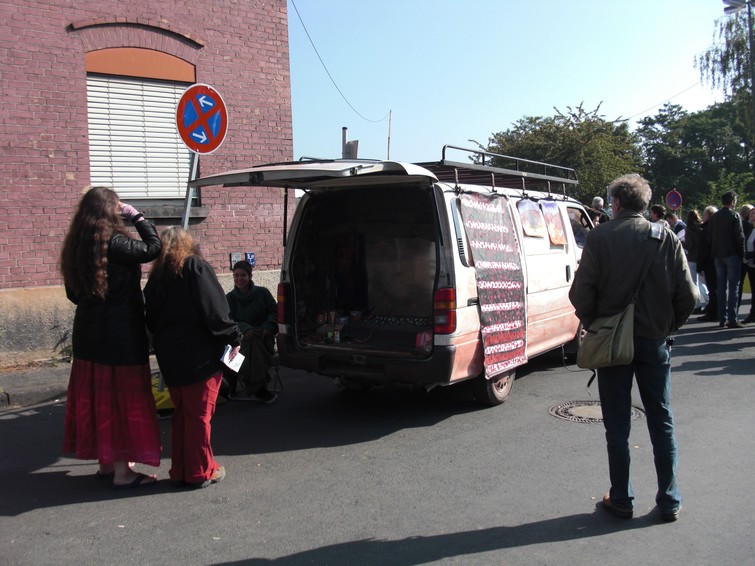 Now. A quick look around the inner city will reveal a distinct lack of alternative sleeping arrangements, but various artworks of a vagrant nature. Lutherplatz on the Eastern end of town offers a reprieve and there is an established group of respectable vagrants well installed already. A good chance to practice your German. For the occasion of the dOCUMENTA they've created their own artwork out of the many hundreds of miniature liquor bottles they have at their disposal. This really is something to see. The bombed Lutherkirche is fantastic from the proximity of Lutherplatz, and from here you can easily grab breakfast at Königsplatz and still be first in line to visit Tacita Dean's impressive chalk mural inside the old financial bureau when it opens at 10am the next morning. Such areas are well maintained and locals tend to steer clear of them. Meanwhile it's so grungy and dark at the amazing Hugenottenhaus that you might be able to get away with almost anything. This part of the city seems to attract the student and alternative scenes so if the sun is getting low and you've still not found anything, there is a good chance of crashing on the floor of a local Wohngemeinshaft (shared flat). The back garden of the Hugenottenhaus a nice place to enjoy a beer and pursue this possibility. Here, you'll also have far more luck with cafe and other recommendations. 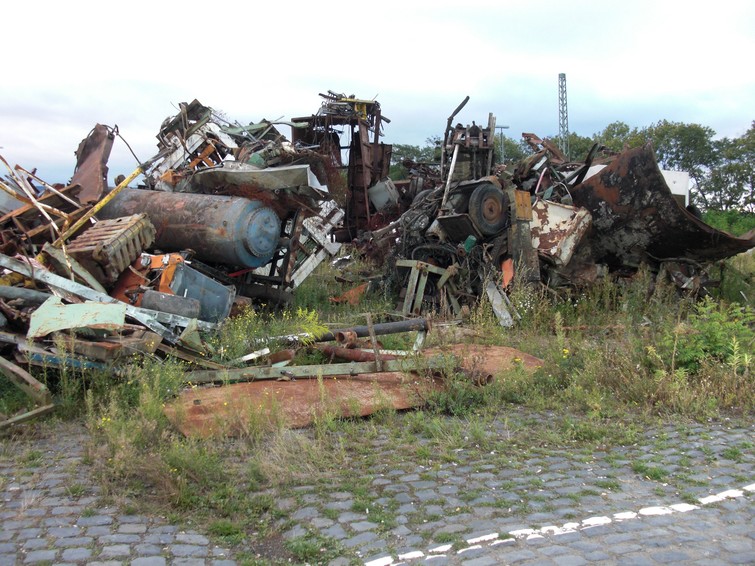 Onwards to the Hauptbahnhof (Central Station) now and its wide industrial wings. A lot of good work to see here, so it might be easy to miss some of the options, including behind the small detached hut that houses Critical Art Ensemble's Free Speech Zone. Be aware that some events take place during the evening. Lara Favaretto's sprawling graveyard of steel should be avoided for obvious reasons. Behind the Nordflügel (North Wing) runs Joseph-Beuys-Straße complete with a line of Oak trees that were planted in 1982 as part of Beuys' work for dOCUMENTA (7). This, or perhaps under one of the other Oaks that were planted (7000 in total), could offer a interesting night's aspect on the soul of the event. Apart from these few areas, almost all of the other inner-city venues are not recommended. 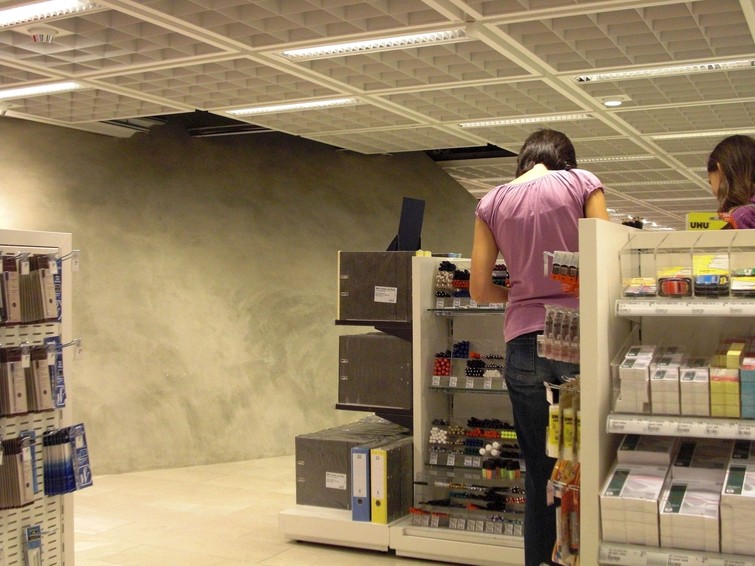 Freidrichplatz, though, offers something of an irregularity as far as art fairs go: an irregularity that is subversive and even cleverly in tune. Here you can join the Occupy Kassel camp and acquaint yourself with the skepticism towards the “persistent belief in economic growth,” which is now well entrenched in various forms, in many world centres. It's also a notion that curator Christov-Bakargiev lists as a key premise behind her curatorial approach. The camp has well souped up its presence at the opportunity, and is tantalisingly close to the adjacent Fridericanum which houses 'the brain', and in various ways, the heart of the event. Real estate could not be better and Christov-Bakargiev has stated that the camp is welcome on the square, and in the city, as it represents a worldwide, democratic, movement. She asked only that campers keep the square tidy and “consider the City of Kassel and the other visitors of dOCUMENTA in a worldwide spirit of germination and flourishing.” This is bound to increase the already good sense of hospitality present.

Doccupy includes a number of artworks constituting themselves in, of, and around the camp, including one or two works that were reportedly 'rejected' from the exhibition despite the fact that applications, to my knowledge, were never encouraged in the first place. There are banners around saying things like 'Tents not Tanks' and even a pink example (of a tank), built to scale and pointing itself adorably at the Fridericanum's neoclassical and very crowded entrance. Perhaps instead they should point it at the lesser-known side entrance. This entrance is used by many locals, but also by other opportunist and often more adventurous visitors. They don't want to save a buck at any one's expense. They still have a ticket. They only want to beat the queues.