An Art of Architecture

This is an installation that consists of an abbreviated domestic condition, which is a characteristic of New Zealand more usually evident in the bach or motel. The assemblage of furniture might signal the idea of a conventional living room but there is insufficient everyday stuff hanging around and the title Living Space, combined with the formal nature of the gallery, tend to drop any ‘room’ characteristics. The furniture seems perverse and unlike current ergonomically fixated or materially advanced designs; it is very low and Spartan. Rather than being an exhibition of furniture this installation offers a commentary on the nature of domesticity and modernity in New Zealand.

In the 1950s a small group of young New Zealand architects designed a series of minimal houses in which the furbelows of Victorian interiors gave way to an austerity intended to clear away the impediments to a new modern world. The ‘First House’ designed by the Group Architects was one such example and it has been much discussed. The house was partially rebuilt as part of The 1950s Show held in Auckland Art Gallery Toi o Tāmaki in 1993 being exhibited as both architectural and social evidence.

In many senses this early modern New Zealand housing has been mythologised, becoming the mainstream version of a time in which such architecture was marginalised and disregarded. Perhaps it is a critical residue of that overworked history that has been cunningly laid out in the Enjoy Gallery exhibition Living Space to catch the architecturally inquiring.

Simon Morris and Brenda Sullivan enact some modern strategies of simplification and reduction that were deployed by modern architects, producing an eloquent emptiness, a calm stripped interiority even as their project could be seen to offer a commentary on other early modern desires (control and stringency). Entering the single room of the gallery a tableau of daily life, a low table, a bookcase and two chairs, is set in an otherwise bare space wrapped on two sides with a mid-grey cloak of paint.

The furniture is pale and finely finished signalling both its raw state and its construction, as would designs by 1950s architects. The seats are plank-like with carefully oriented end grains and the arrangement is contemplative. Their angled backs face each other across a table and the book shelves (empty) contain the setting. It would be peaceful to sit in the room for a while and the chairs are surprisingly comfortable. Low to the ground they place the body in a posture prepared for reading but not the sort of story that would make you relax or loll about. An image of bare potential, of a disciplined life lived without the mess of daily chaos, no children, no food, no plastics. It is a dream with which architects often play—hygienically, poetically. 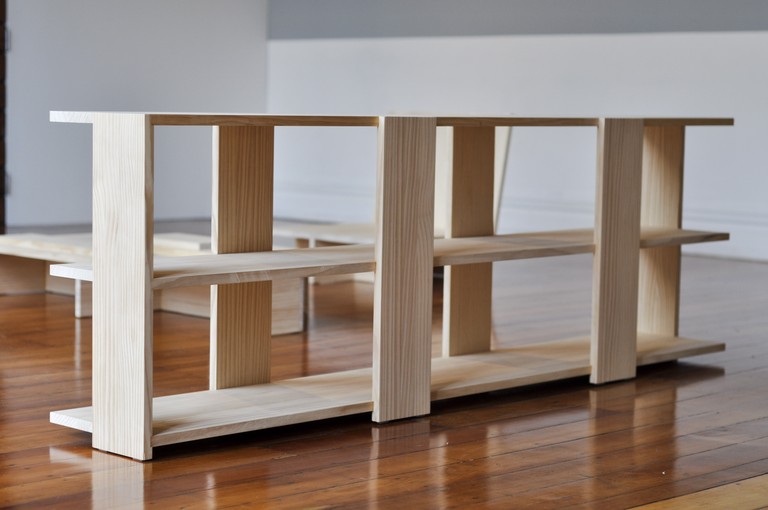 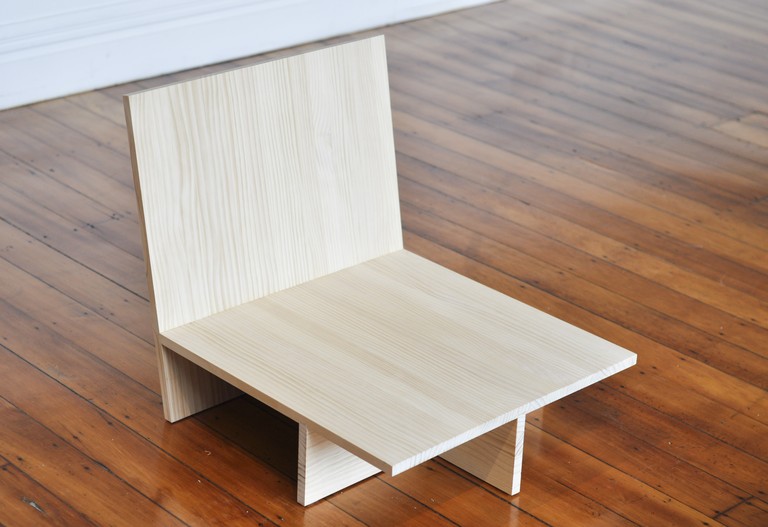 The Morris chairs seem to refer to chairs that were produced for the modern ‘First House’. Designed by architect Allan Wild the chairs were upright dining chairs seeking support from the intersection of only two planes. Their verticality and uncompromising geometry punished any wayward lateral movement. Simon Morris’ chairs are an outwardly similar assembly of intersecting planes but with a sensible (compromising?) additional lateral element under the seat. The Morris chairs give away the perilous upright stance of the First House chairs in favour of a lower and more casual proposal. The table in this new social formulation is less the transactional surface of the Group house dining table and more the instrument of social distance.

Located in alignment with the grain, a raised ‘dais’, both offcuts and symbolic object, is composed on the table. The strange assemblage, at once ordinary and yet also unexpected, seems to imply a residue of the former ritual of the dining table. A shared space for meals, for games, for glasses and books, inwards looking, is set beside the absence of a television. Perhaps the glazed wall to the city is the action screen and the room a quiet observer of the lives of adjacent city inhabitants?

A mid-grey paint covers two walls that contain the furniture. While the paint is matte and does not conceal the slight imperfections of surface, it offers a smooth cover that appears to refuse to be a site for figuration, the task assigned to the mural in the ‘First House’. There, in a mural by Anthony Treadwell, in a world of simplicity, austerity and structure, paint was coloured and shaped into curvilinear forms; it offered a body, albeit a partial and stripped body. The paint for that mural was powdered pigment mixed with wax and white spirits—full of smells and resistance. 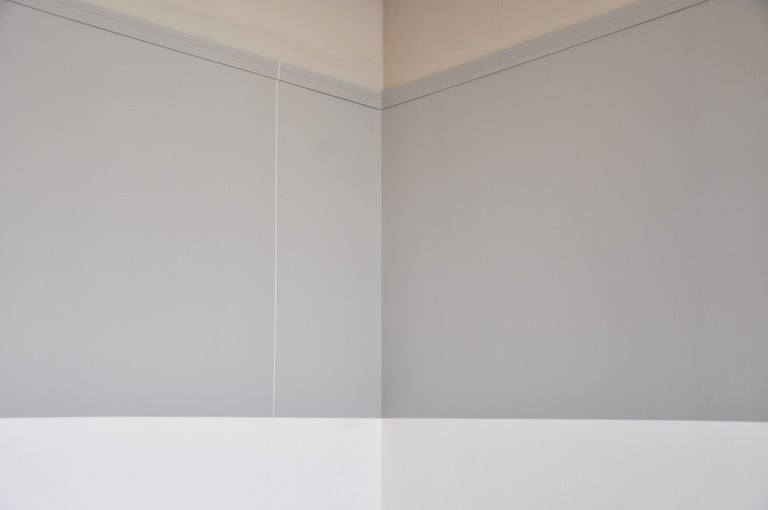 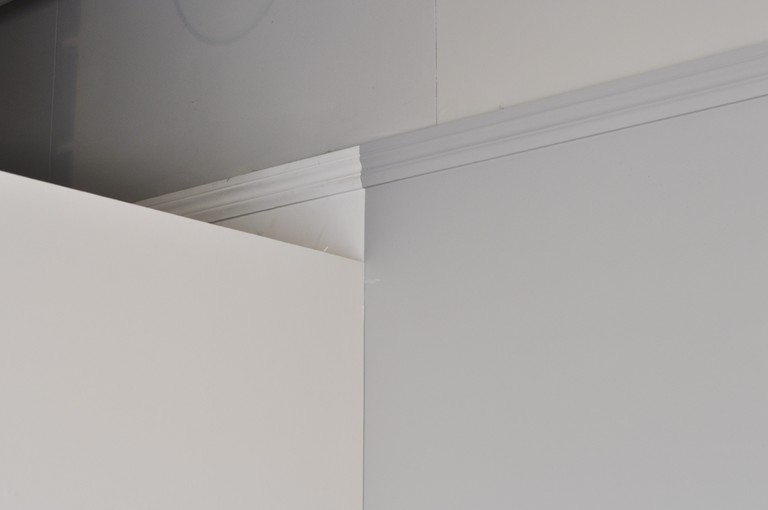 The walls in Living Space with a palette of grey and white seem, nevertheless, to admit qualities that modernity sought to contain. The paint that slides across the surfaces is an emotionally complicated grey and the usual epithets of grey as dull, grey as old, weak and passive, don’t seem to be relevant. These grey walls, neither dark nor light, stretching from seated eye line to picture rail, seem to generate a sense of inhabitation in the new skin of the walls; they swathe the central zone of the gallery as if it were a body.

When Gerhard Richter, a painter who said a lot about greyness, was asked about how the concept of 'untouched' applied to his art he replied:

“That's an ideal case. The grey paintings, for example, a painted grey surface, completely monochromatic – they come from a motivation, or result from a state, that was very negative. It has a lot to do with hopelessness, depression and such things. But it has to be turned on its head in the end, and has to come to a form where these paintings possess beauty. And in this case, it's not a carefree beauty, but rather a serious one.”2

The grey walls in Living Space evoke both the miasma of a depressed state and also a serious beauty. It is where a thin line, a gap of few millimetres, interrupts its flow of paint as it approaches a corner that the effects of the colour are heightened. With regret, at that point, greyness becomes as thin as film, the slightest of conditions, and the ubiquitous presence of acrylic paint in our daily lives is recalled. We cannot bask in its comfort.

The quietness of the grey room with large window is reinforced by the city outside. It observes the colours of a cityscape: brick red Bake House, blue and yellow Met Shop, apartments tinted pale sap green and ochre and cars in shades of red, blue, pearl and black. On a blustery Wellington evening the living space of the gallery illuminated across the dark car park itself went on show; domestic privacy is always only as good as the curtains.