In the Presence of Presence: The embodied souvenir in Sheilah Wilson’s Build Your Altar To This Moment

Presenting themselves as a series of discarded vestiges of the early twentieth century, a number of glass-plate negatives were unearthed from within the wooden Berry Building walls. Reunited with their native studio space in Sheilah Wilson’s recent exhibition Build Your Altar To This Moment at Enjoy Gallery, these tokens are promoted from mere relics to the ranks of the souvenir; embodied mementos that have finally been collected and transported home.

Originally designed and built in 1900 as a photography studio for Messrs Berry and Co., the Berry Building has had a rich pictorial history. Since the photography studio, the site has housed an architecture studio, artist’s studios and galleries. Open to a constant stream of comings and goings, the Berry Building has remained an active part of the Wellington art scene for over a century, and all the while the anonymous collection of images central to this exhibition sat in the attic. Now in the Te Papa national collection, the numerous glass plate negatives depicting Wellington citizens, young and old and in an array of costume, were discovered during a late 1990’s renovation.1 This fractioned, unidentified assembly of young boys in sailor suits and pre-war patriots provide a snap-shot of Wellington in a different era.

In quiet rebellion, Wilson’s work draws your attention away from these eclectic characters and their histories, and instead begs the viewer to give precedence to the prop-laden backdrops used by the Berry photography studio; the same studio that Enjoy Gallery now inhabits. Scanned and manipulated negatives are burnished up against specialist light readings: cyanotypes, of the Enjoy Gallery space as it is naturally lit today. Occupying the very space and light used to create the portraits all those years ago, these embodied souvenirs offer a unique visual portal to the past.

Four canvas wall works and one continuous video-loop are arranged around the edges of the gallery. A stack of immaculate white posters proclaiming ‘Build Your Altar’ centres the exhibit and provides contrast to the dusty grain of the images. In the southern most corner Wilson has set up a projector running a short film. A hand appears, smoothing the white gallery wall. Back and forth, you watch as a shadow of light materialises, seemingly conjured by the bodily act. Softly at first, the shadow then darkens and becomes clearly defined. You are left feeling that it is an uncanny coincidence, giving agency to the ghostly wall-hung works. 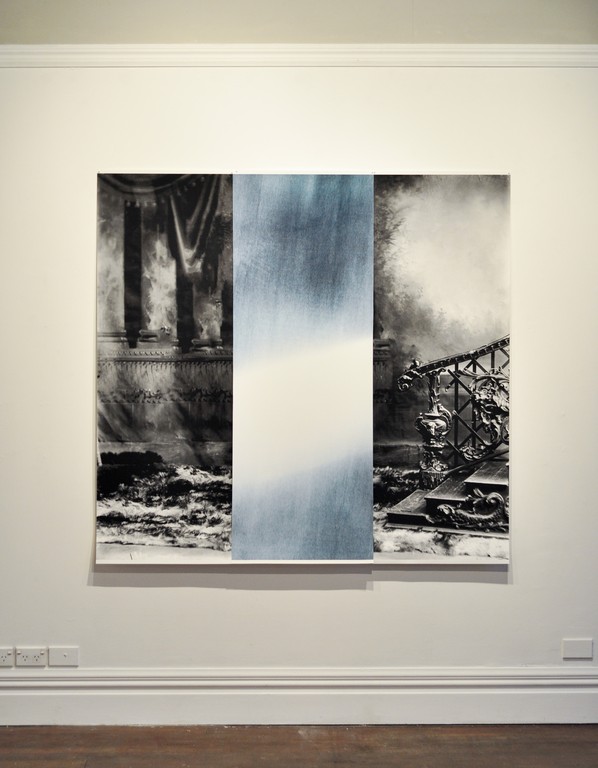 The images engage in an active dialogue of past and present. Each work uses an individual glass plate negative that has been scanned and digitally altered to remove any human model. What is left is the assorted props and backdrops used by Berry photographers. Blown-up to an almost life-sized scale, the scenes are set alongside or bisected by cyanotype readings of light; the element that Wilson has used to navigate both the present and past of this space.

Set within the south wall window are some of the original glass panels. A hundred years of gravity has caused the glass to ripple and warp. This floor to ceiling gesture provides a soft and even light, perfect for studio conditions. Wilson describes, “in order to measure the evidence of the past, as well as compare that with the present, I decided that light would be the unit of measure.”2 Thus one early May morning, the reflected 8am rays entering through the windows were registered by Wilson onto photographic paper through cyanotype. Interestingly, the process of digitally manipulating the negatives is distinctly modern in comparison with the traditional, low-fi light registration. The outcomes of this method are haunting, atmospheric traces. Planes of blue seep like watercolour across the hahnemühle rag paper. Fuzzy edged, indistinct shadows trail off the page. When hung adjacent to the altered backdrops, the result is jarring. The backgrounds play out like stage sets; lustrous fur rugs, a roman column and pediment, ivy laden stairs and landscaped gardens fading into an aerial perspective. Each element has been crafted to exude affectation as opposed to the fleeting, spontaneous moment captured in the light reading.

Historical discoveries such as these negatives often lend themselves to carefully curated, too-precious-to-touch exhibitions. What was once a discarded and forgotten plate negative is elevated into the realm of the antique and in this case, the souvenir. In her text On Longing: Narratives of the Miniature, the Gigantic, the Souvenir, the Collection, Susan Stewart remarks on the incomplete nature of the souvenir. At once a sample of the original, the souvenir (in this case, the glass plate negative) also exists as part of a larger assembly of images, thereby remaining an incomplete token of the original set.3 Wilson asks us to subvert any curator’s reverence and approach the negatives as rich source material to be sliced, re-touched and magnified. Build Your Altar To This Moment offers a new way of peering into the past that is refreshingly devoid of nostalgic affectation.

As you wander past the panels it is tempting to insert yourself into the images. If you could have posed for one of these portraits you would place a foot on the step and a hand on the balustrade, and looking at them you can almost feel yourself doing so. Wilson has carefully re-patched and replaced materials where the bodies once were, and yet a sense of person persists. Is it possible to feel the gaze of a man who was once present in the image? The stage is set for a magic trick and the trick is to disappear. Under inspection, the props appear to have aged and you become aware of the cracks in the elaborate façade. Paint is peeling off the plastered banister, a rough-hewn nail is visible and a badly hung drop sheet trails off on the diagonal. The mechanisms of the stage become visible and the charade dissolves. 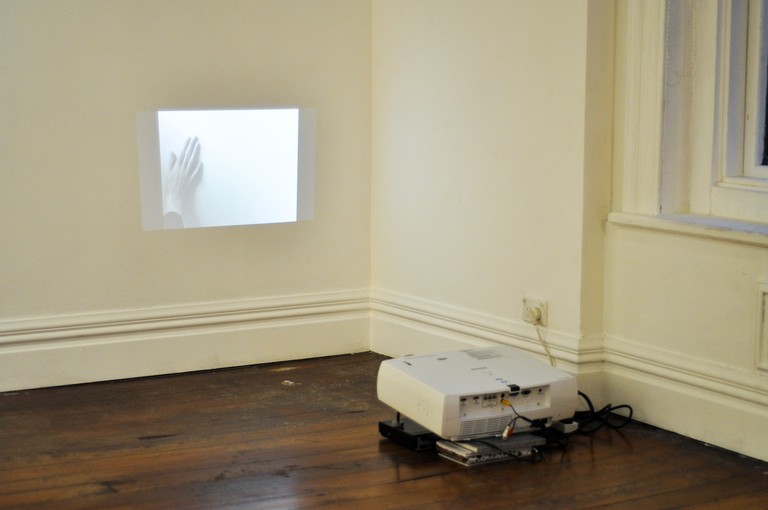 Stewart remarks that the myth attached to these souvenirs is “not a narrative of the object, but a narrative of the possessor.”4 The narrative of Build Your Altar To This Moment is wound tightly around the gallery itself; a location that cannot be attached to the object or image but must remain in part. Tacked to the walls by the uppermost edge, the panels peel away from the building. I couldn’t help but take a peek behind the fabric to dismiss the possibility of a glowing portal door. The umbra wash of the light looks to slide off the page and onto the Enjoy Gallery floor to where they were cast. Every element has been re-appropriated and now presents itself as a dynamic refraction of its former whole.

As Stewart noted “We cannot be proud of someone else’s souvenir unless the narrative is extended to include our relationship with the object’s owner...”5 Thus Build Your Altar To This Moment exists as an authentic experience as long as it remains coupled with Enjoy. To exhibit this site specific work in any other gallery would be to drain it of its narrative core, thereby diminishing its visual and mythological presence.

The Berry building has undergone a century’s worth of renovations and amendments. Like the light that illuminates the artwork inside, the production, presentation and representation of imagery has remained a constant throughout its lifetime. Build Your Altar To This Moment inserts itself seamlessly into the heritage of the space and commands you to reflect on the paradoxical nature of time. Initially cast aside as mere tools in the photographic process, Wilson has reincarnated these glass plate negatives as embodied souvenirs, imbued with the presence of people past, and reunited with the very light from which they materialised.