Mahi Tahi: Te Whare Pora and the space of collaboration

Te Whare Pora was born from the Enjoy 2012/2013 summer residency undertaken by the Mata Aho Collective (Erena Baker, Sarah Hudson, Bridget Reweti, Terri Te Tau). The residency was the artists’ personal Whare Pora, while the term itself refers to the notion of a space of learning and weaving. From this residency the artists produced a work–a vast swathe of inky black material stitched from overlaid pieces of faux mink.

In Te Whare Pora the residency itself is as much exhibited as the art. A looped digital video displayed opposite the mink showed the four artists stitching but also chatting, laughing, and conferring with one another. Inclusion of the group sewing process in the exhibition underlines
the importance of collaboration, which is an enactment of Whare Pora. One of the questions Te Whare Pora prompts is how this traditional Whare Pora space sits against (or rather within) the confines of Enjoy, a gallery dedicated to the contemporary.

Although blanket-like in appearance—and calling to attention to marae and Māori houses as two places where we have seen minks, places where they are valued for their warmth and comfort—the work has a mana and a presence that rises beyond its materiality. Collaboration is a crucial, yet non-material element, one that resides in the work and draws together the various constitutive pieces that make it: The four artists, who individually have backgrounds in digital and photographic practices; the conceptual framework of Te Whare Pora as a traditional art form and practice, and the space of Enjoy Gallery as a contemporary project space.

Potential correlations between wider marae practices and the spaces of contemporary art have been tested in recent years, for example in the work of Inez Crawford, Bouncy Marae (2008): a bouncy castle in the shape of a wharenui, and in Lisa Reihana’s Digital Marae (2001): a wharenui posed within a digital realm. Such works seek to locate the traditional values of Maori society in a contemporary art framework. ‘Tradition’ becomes not just a point of reference but also subject matter, a theme that such artists seek to embellish and complicate. The popular notion of what comprises the ‘traditional’ in relation to contemporary art made seems ripe for artists to examine. 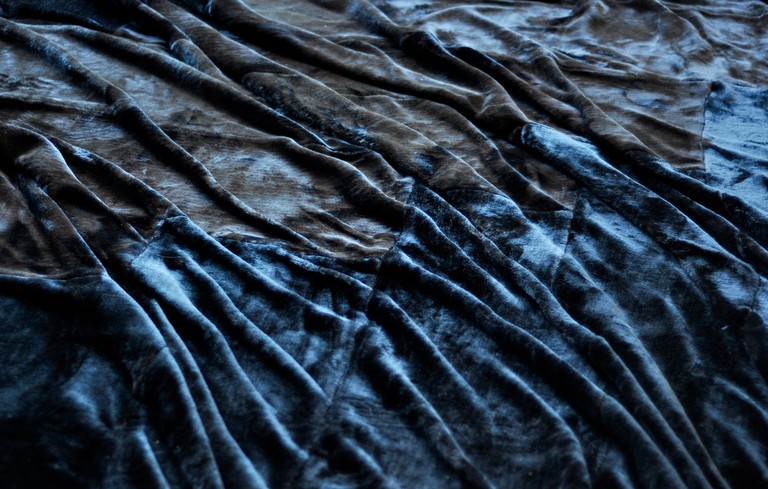 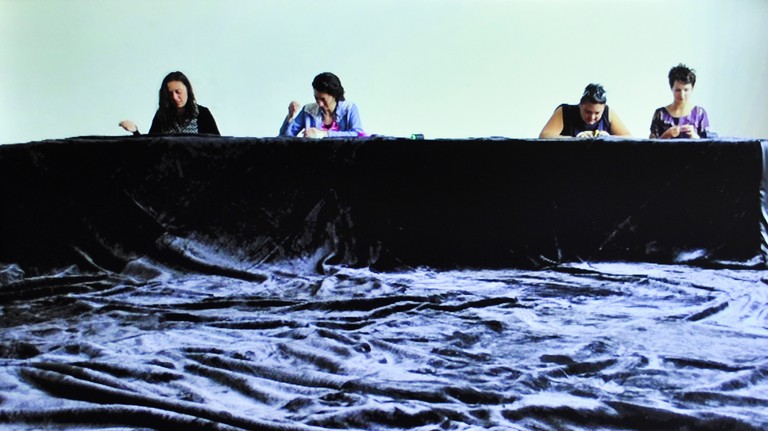 ‘Tradition’ circulates uneasily in the discourse around work by Māori artists. In 1994 Albert Wendt stood in opposition to the use of the word “traditional” in relation to the Māori and Pacific collections of the revamped national museum, Te Papa Tongarewa. By exclaiming “Traditional means nothing to me”,1 he began a movement of reflexivity never before seen in the museums and art galleries of this country, reflexivity that critiqued how and why these cultures were represented. The use of the term assumes that the past is a monolith never again to be seen, and in the instance of the Te Papa collections ‘traditional’ referred to art objects produced in Aotearoa and Polynesia prior to European contact. Therefore, opposition to the use of the word “traditional” in the context of Māori art forms stems from the assumption that Māori culture is unchanging and stagnant. Describing certain Māori taonga as “traditional works” risks overlooking the intervening years of innovation since European contact. The chosen medium of Te Whare Pora—faux mink produced on a Chinese factory production line—is disjunctive against the traditional Whare Pora context. The use of synthetic mink material instead presents the conditions of the post-global 2000’s, highlighting the impact of cheap imports and 21st Century commerce on contemporary practice. Such millennial culture-clash is evident in the popular kowhaiwhai pattern mink blankets; a symbol of the confluence of mass culture, kitsch aesthetics and cross cultural appropriation in the contemporary marae space.

This disjuncture is furthered by the mink piece in Te Whare Pora not being constructed in a (here is that word again) traditional way. Instead of being woven, it was sewn by machine and hand. In his PhD thesis Taonga: a tribal response to museums, Paul Tapsell explores the many tikanga surrounding the Māori concept of taonga.2 To view Te Whare Pora through these tikanga is to expose the preconceived notion that the basis of a taonga is merely tactile. Tapsell’s list of tikanga is thorough, and each element feeds into another: whakapapa and tangata whenua, and mana and tapu, through to marae, kōrero, karakia, mauri, ihi, wehi wana, wairua.

When Tapsell wrote of whakapapa and taonga, he was referring to taonga tūturu taonga that have been around for generations of Māori and that have accumulated their own histories along the way. What does this mean for contemporary Māori taonga such as the blanket in Te Whara Pora? A simple answer would be to say that the whakapapa of Te Whare Pora did not begin in the days of the residency. Each artist brought their own whakapapa into the process and by working with each other on this collaboration, arguably began a new branch in this complex and intertwined concept. 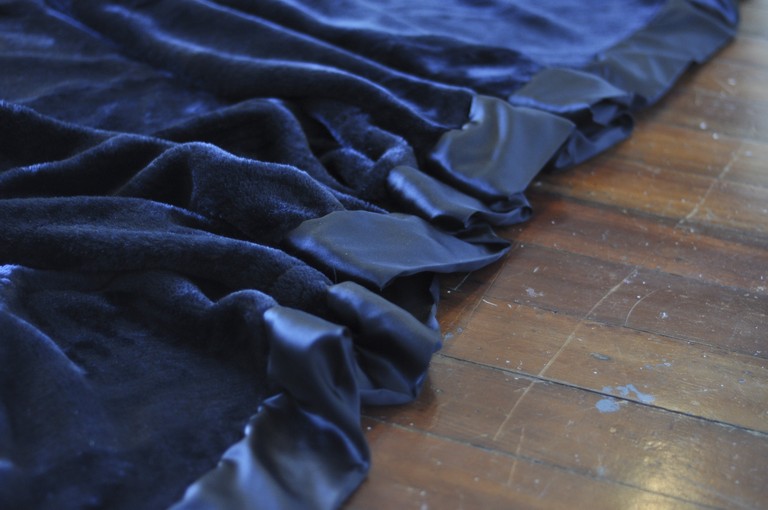 Tapsell’s thesis also mentioned marae and their import in the performance of taonga at times of life crises like tangi.3 How could we view Te Whare Pora in its contemporary setting in a gallery? It was exhibited but, as was witnessed at the opening, it wasn’t off limits to the people present; there were no barriers to prevent people from touching it. People “performed” it by interacting with it, running behind it, pushing against it, picking it up and talking about it. This behavior exposed yet another ‘tradition’, this time that of the contemporary art gallery or museum space, where conventionally one does not touch the work. Commonly, museum display practice prohibits the touching of taonga (still a point of some debate within the sector), and this exposes the culturally imported nature of the museum and gallery environment, an environment that does not always make for an easy marriage with tikanga.

Framing Te Whare Pora through the lenses of protocol and tikanga raises the issue of how meaning is prescribed to Maori art objects, and indeed to the wider conception of an art work. Reuben Friend, curator of the Deane Gallery at Wellington’s City Gallery has asked in the past, “Is a taonga a taonga because we say it is?”4 Indeed, Friend’s 2009 show at The Dowse, Plastic Maori, examined the implications of synthetic materials replacing customary organic ones in Maori art, and the tensions this created when considering it as potential taonga. Te Whare Pora embodies this same tension; the faux mink, found so often as bedding on the contemporary marae, does not conform to notions of ‘traditional’ weaving materials such as flax. Friend’s question of what elevates a taonga to a higher state is also easily applicable to conceptions of contemporary art. At what point do we consider an assemblage of materials to have the status of art object?

In 1898 Elsdon Best eulogized the Whare Pora, writing that the cause of its decline was due to the import of mass-produced textiles from Europe:

“...the aronui and maro-kopua of old have been replaced by print dresses, the leveling prints of Manchester and the wooden-nutmeg State, which are procurable alike by slave and chief-tainess. The rays of the setting sun are lingering on the dismantled and empty whare pora...”5

Writings such as Best’s which attempted to document and preserve such practices as the Whare Pora may have contributed to their ‘traditionalisation’, installing what some might call a preternatural art history. Best’s remarks, now consigned to history, indicate a gross underestimation of the artist’s ability to adapt to new materials and new circumstances. Te Whare Pora tests both the space of the contemporary art gallery residency and that of the Whare Pora, revising considerations of what can be produced from both.