the last of the magicians 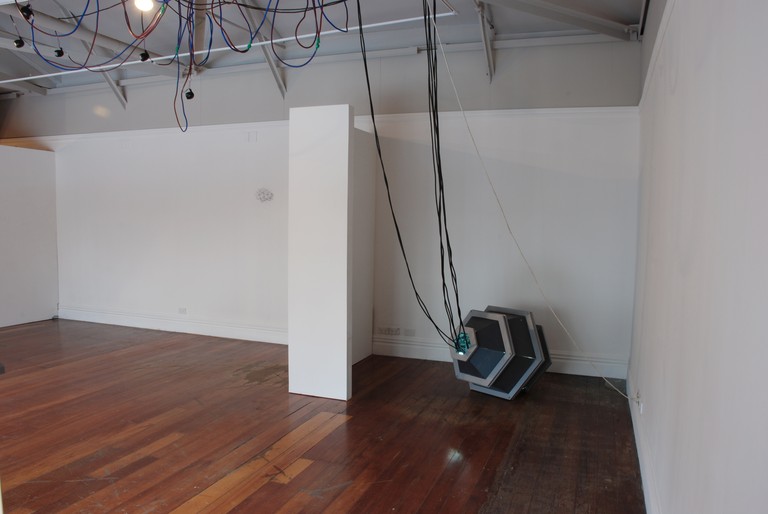 In 1687 Isaac Newton published one of the most important scientific works ever written: the Philosophiae Naturalis Principia Mathematica. This work contained three Laws of Motion that form the basis for classical mechanics, the third simply stating: “For every action, there is an equal and opposite reaction”, and it is this law that informs the title of Peter Trevelyan’s exhibition Actron and Reactron.

Consider for a moment that Newton’s third law is a metaphor for the relationship between an artist and his or her audience. Despite postmodern aspirations to engage the viewer, many artists and art spaces still often promote the old adage ‘please do not touch’. Trevelyan’s implication inherent in his title predeter- mined that a visitor would have some kind of experience in his exhibition denoting an action or reaction, and raised the immediate question of ‘what, or even where, is the art engagement?’, challenging the audience to find out by way of action.

Actron and Reactron was successful in drawing significant interaction from its visitors, whether passive, unwitting or conscious. Each of the three distinct works in the exhibition presented a puzzle to be deciphered, or posed a set of tests and questions that challenged the viewer to engage.

From the moment of entering the gallery space, viewers encountered a number of small, round discs hanging in the ceiling space of the gallery. Although initially hidden from view behind a partition wall, the discs led—by way of Medusa-like black cables—to a light and mirror-filled grey kaleidoscopic polyhedron, somewhat evocative of a grenade, or even a Dalek. The lights blinked on and off, transmitting gibberish Morse code and presenting Trevelyan’s first technological puzzle: what makes the lights go? The answer lay in inevitable, uncontrollable action and reaction. Technology can be a mystery to many, and as such it was inevitable that not all visitors recognized the discs as motion sensors and were sub- sequently unable to determine the cause and effect of the blinking lights. Movement within the gallery space caused the Dalek to wake, reacting with light, and immediately caused all visitors to became part of the work regardless of their powers of deduction.

As the sensors covered almost all parts of the gallery (excluding only the office space), visitors observing the work were unable to avoid being part of it. This unwitting action and reaction forced them into the role of accidental performer. While the consequence of being placed in this position was relatively low-risk, an interesting statement was made about how some technologies can lead their audiences into situations of unanticipated and even uncontrollable voyeurism. While surveillance was perhaps not Trevelyan’s primary focus, the Dalek, with its motion sensors, inevitably raised questions of this nature. 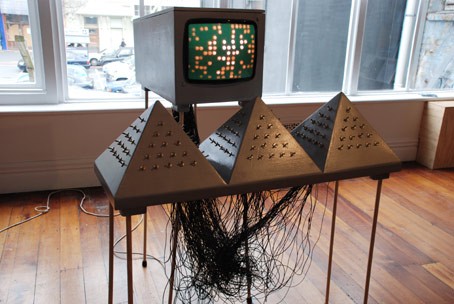 The second work was perhaps a more straightforward puzzle in terms of action and reaction. Located on a table-like structure in the main body of the gallery, three pyramids covered in switches sat in front of a small monitor, in turn transmitting an evocative pattern of glowing red dots. Both the monitor and the switch-board trio sat on stilt-like legs that lent them the appearance of strange robotic creatures and were housed in et al.-esque grey painted shells. A swarming mass of black cables descended from the pyramids, looping back up to connect to the monitor.

Such a mysterious system of buttons and lights was hard to resist for many visitors, who found themselves flicking switches in hope for a reaction of some kind. Those with a perhaps more than average knowledge of gadgetry, or the gift of patience, persevered with the work and were even able to produce cognitive results. The puzzle presented by the object was perhaps not so mysterious—to determine which switch matched which light, and in this regard the object lent itself (in Trevelyan’s words) as a computer drawing system. One persistent visitor was even able to ‘draw’ a square.

This challenge to interact with technology when a reaction is unknown is a dilemma that interested the artist. To inspire or incite his audience with some kind of reaction, Trevelyan dared visitors to rebel against any common ideas about art and gallery-going experiences, asking them to touch despite the sensibility that it is wrong to do so.

Technology is a mystery to many, and often the path to decoding it is by being able to tinker. In the mechanical age, tinkering—particularly of the back shed variety—was far more common, however with the advent of digital technology the inability to do so stifles creativity and learning processes that were perhaps more prevalent in previous ages. This inability has partly come about through the desire of tech- nology companies to keep their methods secret: hiding their code so that consumers are unable to partake in customisation or do-it-yourself fixes. Instead, only those with company approval are given the tools to fix technology, which is both an effective vote of no confidence in customer’s abilities, and also an excellent business model (if maximum revenue is the goal). Movements such as Open Source1 are slowly opening up this model, encouraging working processes such as sharing, collaboration, and learning through DIY.

In contrast, Trevelyan’s third work in the exhibition was more transparent in terms of its cause and effect—a complex polyhedron construction made of delicately fused pencil leads hung discreetly on the wall. This work presented a conflict with the other works by not calling for physical engagement; in fact, such interaction would undoubtedly have threatened the safety of the object. Trevelyan has created objects such as these before, and considers them a kind of three-dimensional drawing. Certainly, in this exhibition it operated as a quiet meditation on the other objects, as drawings often do. Perhaps in consideration of this, the object was hung at head height rather than at a more accessible height that might encourage interaction. Contemplation is a key part of problem-solving and as such this drawing added a successful tangential comment on the other works.

John Maynard Keynes once stated that “Newton was not the first of the age of reason: he was the last of the magicians”2, referring to the fact that Newton’s career occurred at a time when science—with its love of evidence – was beginning to emerge out of alchemy (science’s mystic cousin) and there was not yet a clear distinction between the two. Science encourages rigorous testing and questioning in the quest for hard evidence and universal truth.

While carrying a formal love of bizarre, mysterious technology—its polyhedrons, lights, buttons, cables and black boxes, Actron and Reactron provided its audience with a playful, non-threatening encounter and an opportunity to uncover the mysteries hidden in the work. By inviting others to join in his experiments, Trevelyan gave the impression that the mystery in question was as much a puzzle to himself as it was to the audience, and through collective engagement some form of truth might be uncovered.