Through a glass, darkly 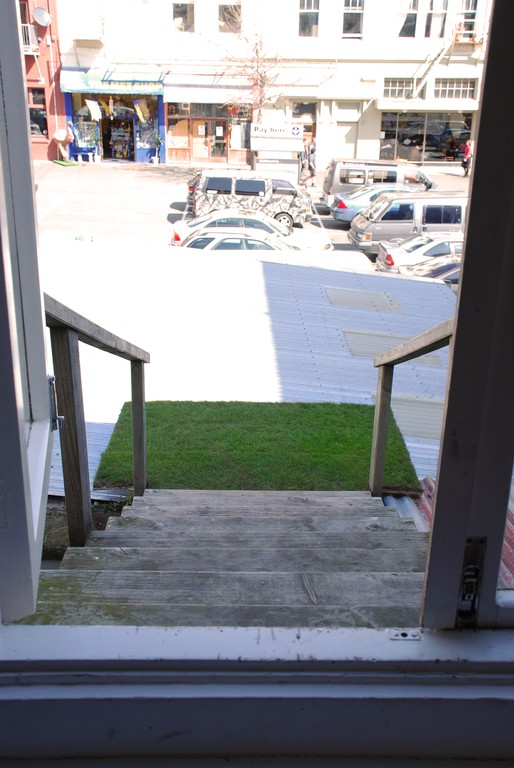 What do you take with you, knowingly or unknowingly, when you embark on a journey? And how do the things and ideas you take with you shape and define your perception of the world around you? Drawing on the writings of New Zealand historian and ecologist Geoff Park, Pilgrim Tourist explored the global import and export of things and ideas through migration and travel and how such transferences have prescribed our definition and understanding of place, and in particular the natural world.

When Noonan moved from Christchurch to Wellington shortly before the opening of Pilgrim Tourist, she took with her a piece of home. Several pieces of living turf, in fact, neatly rolled and lodged into old-fashioned hand-made tramping packs. The pack's aura of time (old canvas and heavy leather) contrasted with the bright green of the fresh grass growing inside the rolls of turf. Heaped into a little pile on the floor of Enjoy Public Art Gallery, this collection of earthy baggage exuded a feeling of warmth and protection, the sense of comfort conjured by the thought of home on a long journey.But, they were also reminders of the load that luggage brings to the traveller: the weight of memory; the effort it takes to carry with you all those souvenirs and reminders, the things and ideas.

In previous work, Noonan has mapped the soles of her feet, or travelled to Greenwich in England to the charged site of the Prime Meridian Line to investigate the cognitive devices that the Western world uses to "comprehend, claim, and divide space", interests that dovetail with current international concern over global travel, migration, and diaspora.1 Taking us back to the start of Western global expansion, Pilgrim Tourist was comprised primarily of a series of investigations into the theme of the Claude Glass. 1his small framing device, highly fashionable in Britain during the eighteenth century,allowed amateur artists to construct the perfect landscape scene according to the conventions of the picturesque. Travelling artists and tourists carried these optical aides with them on their journeys into the Swiss Alps and further afield. To use it one had to tum one's back on nature and apprehend an image reflected in a dark glass, reversed, and tinged with a romantic glow. This small tool became part of the process whereby nature came to be seen as landscape, to be viewed as one might a framed picture, or a tourist postcard. Accordingly, it went [lens]-in-hand with the Western notion that nature might be possessed as an object, and traded as a commodity.2

Rows of slender Claude Glass lenses shaded in rainbow coloured hues lined one wall of the gallery. A video work documented the artist at night in a field as she quantified the ground with a continually clicking measuring stick, mapping, surveying, the warm glow of torch-light creating a ghost-like continu­ ation of the circular Claude Glass motif. Similarly intimate in feel was a small photograph of a pastoral theme (a field in the artist's home of Canterbury), flawlessly rendered in obeisance to the rules of the picturesque; a perfect scene, with copses of trees framing to right and left and the horizon line hanging in exact proportion. 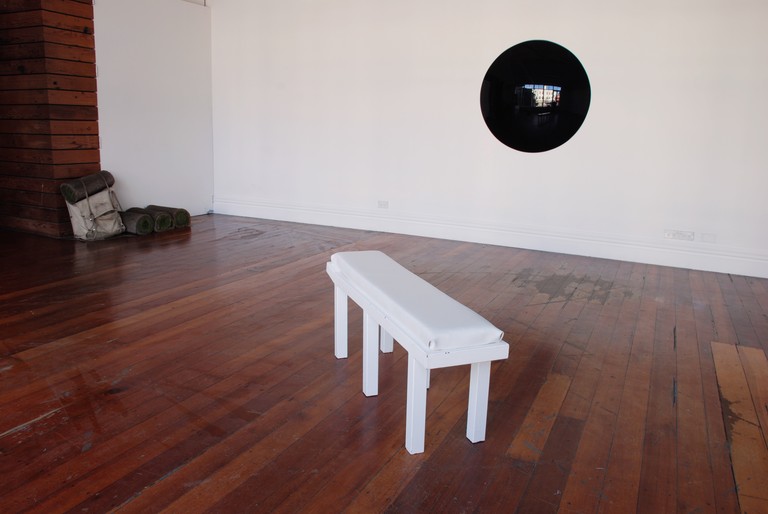 Noonan's studies into the theme of the Claude Glass lent the exhibition an investigative feel that was in line with the theme of colonial exploration and examination. The exhibition expanded in different direc­tions like a spider's web, took different routes. This emphasis on journey, or process was reinforced by an element of entropy in some of the works, particularly the rolls of turf, which were subject to a process of disintegration.

The work in the exhibition which held the most emotional charge was a large black convex lens fixed to one wall, its dark density a direct contrast to the egg-shell like delicacy of the smaller lenses. This work elicited a host of references. In the eighteenth century, the Claude Glass was also known as "the black mirror". Black mirrors are used in esoteric practices as vehicles of shamanistic journeying, to access self­-knowledge -to find oneself. A mirror-like locus of self-reflection and interiority. A pool of introspection. Narcissus' pool? Satan's mirror of ambiguities and distorted truths?

We all hate home
And having to be there ...

So to hear it said
He walked out on the whole crowd
Leaves me flushed and stirred ...
... I'd go today,
Yes, swagger the nut-strewn roads,
Crouch in the fo'c'sle
Stubbly with goodness, if
It weren't so artificial ...3

The movement of people from place to place (whether they be nomads, travellers or exiles) is filled with myth making. Inthe mind of the traveller, both origin and destination can become interwoven with fabrications, stories, and ideas. The site of origin can become temporally static, while the site of destina­ tion is perceived as a hallowed land. Travellers can be transformed into both exotic strangers and 'sans papiers' -people to be feared or revered. To the traveller in a strange land, the Claude Glass assisted in  the fantasy of forging a sense of place. The device lent some familiarity to a landscape, imposed order on it, and created borders, limits to its overwhelming continuity.

Pilgrim Tourist evoked the work of Joseph Beuys in palpable ways.4 I was reminded of Beuys' alertness to place and the transference of ideas between places, his feelings of displacement in his own culture, and his desire for "Eurasia", a personal utopia that reconciled Europe and Asia, centre and periphery. In particular, Noonans canvas packs carried close visual links to Beuys' 1969 work 1he Pack, now held in the Staatliche Museum in Kassel, Germany. Sleds carrying rolls of felt, fat, and little torches for navigation spill out of the back of a Volkswagen van in this work, one of Beuys'many retellings of the story of his (possibly) mythical rescue and rehabilitation by the Tartars, a nomadic people, in the Crimea during World War II.

As the title of the exhibition suggests, Noonan's work alludes to the space between the Beuys-like rever­ ence of a pilgrimage to a site of promise or growth, and a cynical awareness of the quick-fix superficiality of the tourist's snapshots and postcards. While some works conceded to the romanticism ofjourneying to 'lose oneself', or to 'find oneself', the click clicking of the surveyor's measuring stick acted as a perpetual reminder to the viewer of the commercial motives of much of the West's expansion across the globe. In the current climate of concern over displaced people, politically and ecologically, this message takes on a new urgency. Pilgrim Tourist suggests that the processes and consequences of investing place with a set of pre-conceived ideas, as emblematised in a very tangible way by an eighteenth-century optical tool, are still being played out today.