Between May 2018 and April 2019, Enjoy's former archives and library intern Imogen Simmonds catalogued and rehoused our archive. In this series of blog posts, Imogen reflects on interesting moments from Enjoy’s 19-year history, and considers how our past projects have helped shape who we are today. Read Snapshot #1 here. 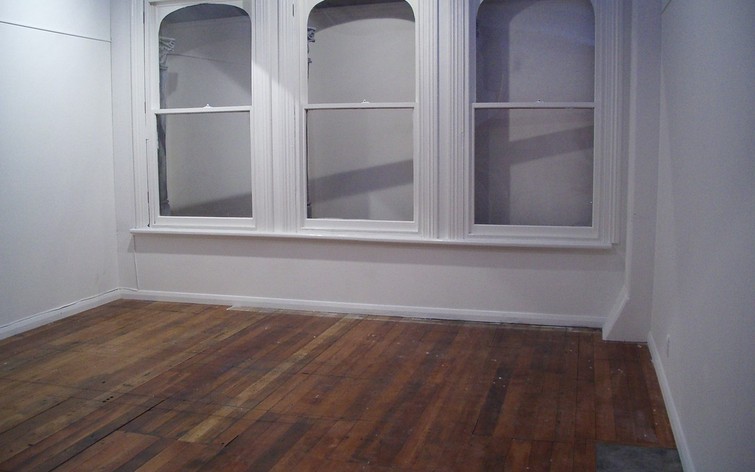 Space and time are slippery concepts. They are abstract ideas, yet rooted in experience. How these forces act upon the world, how they interact with one another, how they can be navigated, quantified and bounded are concerns that artists continue to grapple with. During Enjoy’s nineteen years, we too have attempted to get the measure of time and space: supporting artists in their quests to muddy the waters of received wisdom. Two past exhibitors who mobilised space/time in order to challenge a fixed approach were Fiona Connor with Inner City Real Estate 174/147 (8–21 July 2006) and Clare Noonan with Pilgrim Tourist (6–22 September 2007). Through installations that “interrogate[d] their own form,” the artists encouraged viewers to be led by sensation and to engage critically with spatio-temporal collages.1 By highlighting the fluidity of notions like space and time, they ask us to approach other supposedly oppositional concepts with the same flexibility. Identifying boundaries as plastic, they paint reality as plural rather than singular.

In this post–part one of two–I’ll hone in on Fiona Connor’s practice. Drawing on a recent, lively Skype conversation with the artist (now based in Los Angeles), I’ll unpack how she took the gallery space as her starting point and re-imagined and activated it to subversive effect. 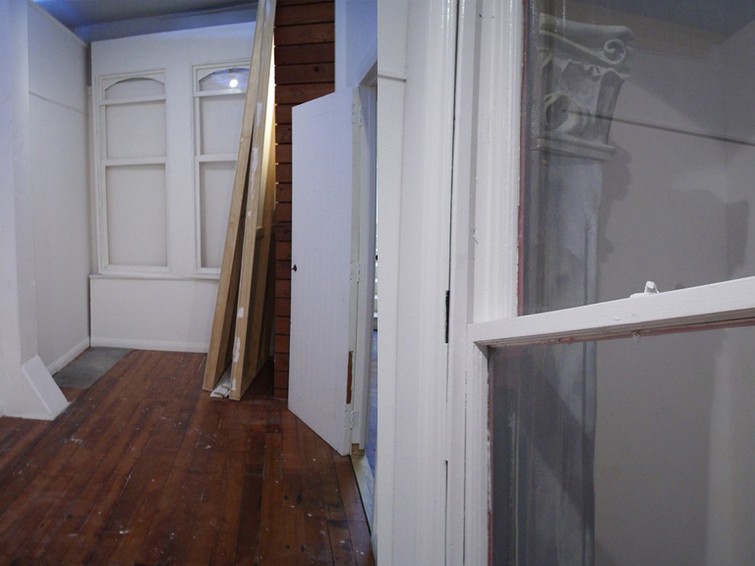 For Inner City Real Estate, Connor (re)created a life-size document of Enjoy’s original location at 174 Cuba St and brought it into being within the walls of the gallery space at 1/147 Cuba St, Enjoy’s home between 2006 and 2019. Paying uncanny attention to placement, architectural detail (like the Corinthian columns on the building’s façade), finish and wear, Connor’s project can, on one level, be understood as a monument, an earnest memorial to a bygone era. Thinking back on what drove this ambitious project, the artist confirmed her intention to speak to those histories “embedded within our built environment.”2 As someone emotionally invested in the formative Enjoy, the artist described both making and inhabiting the work as a “very embodied memorial process.”3 She recalled visiting the site and spending hours measuring each fitting and floorboard, every scuff mark and gouge.

Initially left empty, the work could therefore be understood as an exercise in mimetic replication; a means of better remembering the idiosyncrasies of 174 Cuba St. The past made tangible. However, by reproducing these supposedly fixed environmental elements exactly in a new context and focusing our attention on them, Connor complicated a consignment of the old gallery to the past.4 Even during this early stage in its lifecycle, her replica embraced paradox. An imitation yet “original”, the work was a representational translation of a functional gallery, complete with traces of lived activity yet devoid of artwork.

The true power of Connor’s work was realised when art and life were fed back into it. Interested in how the old space “supported a particular type of conversation,” Connor was fascinated by what might happen when Enjoy veterans like Kate Newby and Daniel Du Bern exhibited both redeveloped projects from 174 Cuba alongside new material inside her gallery-within-a-gallery. “Would it be like old times?” she wondered. “Would it make people act a certain way or bring all the warmth and connectivity” of Enjoy’s first home back? 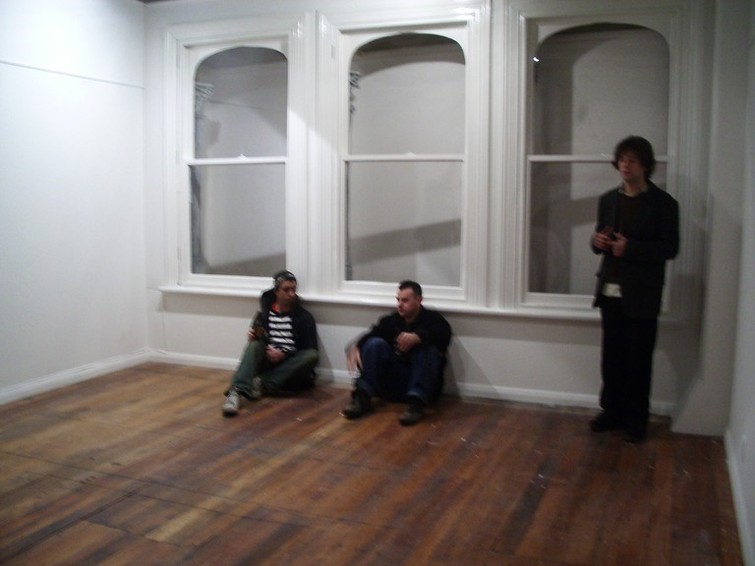 What transpired was far more striking. As individuals moved inside the work, “showed art in it, got drunk in it and hung out in it,” Connor found that things “started to get interesting.” It was in part from these relational interactions and “the way people came to terms with the work by being in it” that the installation drew its meaning. The artist remembers a compression of bodies jostling to squeeze inside the Russian doll of a gallery, alongside the audience’s visceral responses to it. Several sentimental regulars of 174 Cuba “got really emotional,” whilst the show was an entirely different experience for visitors unfamiliar with the original Enjoy. This, Connor feels, was “really powerful.” Individuals could negotiate the work whilst invigorating it with their own subjective readings.

By injecting a wealth of objects and actors, themselves tied to different points in space/time into the piece, simplistic interpretations were disrupted as participants transformed Inner City Real Estate from a static facsimile into something altogether different: a complex tapestry of interlaced times and places, a spirited intervention.5 Here, Connor mobilised art to “demonstrate possibility.” She activated her work’s latent content to conjure a liminal space that transcended everyday boundaries. It acted as a “bridging mechanism” that moved beyond binaries and forged a dynamic relationship between Enjoy’s past, present and future.6 The old Enjoy was felt in the present and fed into the production and reception of artwork that framed and created meaning for the gallery’s future. Charged with a productive discomfort, the hybrid gallery fostered layered meanings and signified beyond either space in isolation.

As such, it served as a prime spot for placemaking–the practice of defining a site by investing it with meaning through action. Connor’s show made a productive sense of place felt at Enjoy during a period of great change for the organisation. Her work helped negotiate narratives of continuity and re-definition, making 174 Cuba St feel known whilst ushering in a new chapter and staying true to the gallery’s experimental ethos, its “belief in just trying something out.” In doing so, the artist made a statement about the kind of space Enjoy is.

Connor’s intervention existed as both an artwork and an exhibition space, as a nostalgic and progressive piece that was monumental but not static. “I was interested in disruption and… art not behaving in the way it should,” the artist explains. “I was… trying to get people to think outside of how they were... [being] contained.” For Connor, everything is in flux and received understandings be damned. She recognises kaleidoscopic viewpoints and nuance as sources of power. This was the crux of Inner City Real Estate. It refuted attempts to regulate, juxtapose or control fluid ideas.

This approach is reflected (quite literally) in Clare Noonan’s Pilgrim Tourist, a similarly boundary defying exhibition of mirror installations that politicised the looking glass and reshaped the gallery’s image, muddling space and time. Just how this self-conscious medley was executed will be explored in Snapshot #3.