The Reconstruction and Retrieval of Enjoy Public Art Gallery

A photograph taken during the installation and working bee for Fiona Connor’s Enjoy exhibition represents something that I have been trying to avoid whilst engaging with this artwork. Her reconstruction of the original Enjoy Public Art Gallery within the site of the new gallery brings to mind the often over-used terminology that denotes “community” as the basis for an analysis of site-specific and relational art works.

Miwon Kwon devotes two chapters in her seminal text One Place After Another: Site-specific Art and Locational Identity to community based, or community-centric artwork.1 I am not suggesting that Kwon is in any way paying undue attention to something that clearly deserves analysis, but rather that the idea of community can be hard to escape from, and is a tempting critical tool. The language used to explore the significance of community can also become a structural endeavour where the organization assumes prominence over the function of a space. This places a distinction on the semantics of hierarchical systems, over the delivery and reception of an artwork. The outcome of this kind of community-focused discussion means dwelling on something that is self evident, when one has documentation in the form of ephemera or archived material to augment the fact of its operational motifs. These are the most common methods of reconstructing a history using a conventional format. Newer methods however utilize multiple subjective viewpoints, such as oral histories, allowing the subject/s to build a historical narrative through their own agency.

Perhaps then, it is more pertinent to explore the historicizing gesture employed by Fiona Connor in the act of recreating and replicating the old space that was Enjoy (full stop) and re-embodying it in the new. The resulting re-creation reinforces the historical relationships signified by locating and identifying the old, whilst implying continuation via the new. In this context, the work utilizes the idea of documentation with a historical prerogative, and the fact would remain that Connor’s work relies on a pre-existing knowledge – and relationship with the old – for the work to operate to its fullest extent.

At this point, I refer the reader back to the construction photograph. Does it in fact represent the documentation of a community activity, or the act of constructing meaning? The argument could be made for both, if one were merely to separate out this image and apply a context.

Interpretation can in this regard be problematic. As a temporal activity of reconstruction and extrapolation, to assume the mantle of authorial witness would be distasteful. Connor’s exhibition operated multiple functionalities. On one level, it reclaimed a historical perspective accessible to those who had previous association with the old space, yet on another, it acted as a functioning exhibition space within an exhibition space.

This show has possibly made the most important and eloquent statement about Enjoy Public Art Gallery that I have encountered ever, full stop. Connor’s Inner City Real Estate 174/147 never forgets the purpose of the art space as an exhibition space, as evidenced in the inclusion of the works of artists like Kate Newby or Sarah Hopkinson. The site-specific elements of the exhibition – the reconstruction of the old Enjoy gallery space – co-exist with and reinforce the methodologies of representation inherent in other visual mediums that share this historicized imperative.

Any historical contextualization is subject to broader implications as to whether it functions as a closed or open system of interpretation. Because Fiona Connor’s work acts as an invitation to explore the roots of Enjoy Public Art Gallery, as it exists now, and what it was before its move, every person who had a stake in the gallery must have been forced to contemplate this artwork on a self reflective level. The idea for the work itself must have been almost irresistible as a kind of bridging mechanism. On one hand it certainly caters towards those who have a prior relationship with or knowledge of Enjoy Public Art Gallery, yet this is possibly only true of Connor’s gallery before other works were exhibited within her constructed space.

A broad conceptual understanding of community-based art deals with the social distinctions found in society at large. This perspective does away with a more specialized, closer look at the intricacies one finds in any complex organization. In the case of the arts community centred on Enjoy Public Art Gallery, the argument for different means of understanding community-based art is important, because the community contains a certain amount of nostalgia.

The show’s title Inner City Real Estate 174/147 infers at once a desirable location, yet something that is also hard to attain without a certain kind of capital. In this case, Connor
could be said to be generating capital in the form of art’s most fundamental commodity, the exhibition space. Connor’s hyper-realistic reconstruction of the old Enjoy site was imperfect in a number of distinct and important areas. The outer or real gallery was visible behind the inner gallery’s windows and next to the office. The office was entirely open to the exhibition space; one was required to walk through it to experience the work.

In other words, the original spectacle of the work was collapsible, one could see through the illusionary aspects of the first stage of the exhibition. The inclusion of other artists’ work signified Connor’s intention towards ongoing art-based practice for the purposes of exhibition.

In the first stage of the exhibition, the room was left unfilled and empty of works. During this stage, the viewer was encouraged to explore the room as an actual space, as architecture manifest. This created an experience reminiscent of Dan Arps’ site-specific work Viewing Platform no 2 from the first series at Enjoy, Viewfinder. Transporting that concept into the current site is poignant to me, as a fan of the origins of Enjoy, and site-specific art. However, it was the transformation from seemingly straightforward site-specific work, to a more complex artwork transcending the dualistic old/new binary opposition, which defines the exhibition for me.

Connor’s Inner City Real Estate 174/147 moved beyond the initial signifier of Enjoy Public Art Gallery as a space and embraced constant change. In short, it is in the temporal aspects of the show that momentum was gained. The processes of construction and installation became interchangeable through the continual transformation of Connor’s artwork. Sound-based performances by The Stumps and Birchville Cat Motel were staged during the exhibition exemplify this aspect of the work.

The relationship between the old and new Enjoy is made complex by the inclusion of artworks and performance: Connor created new parameters by actually operating her work as a gallery. This enabled a certain amount of slippage that in turn generated a further context for her work to operate in. 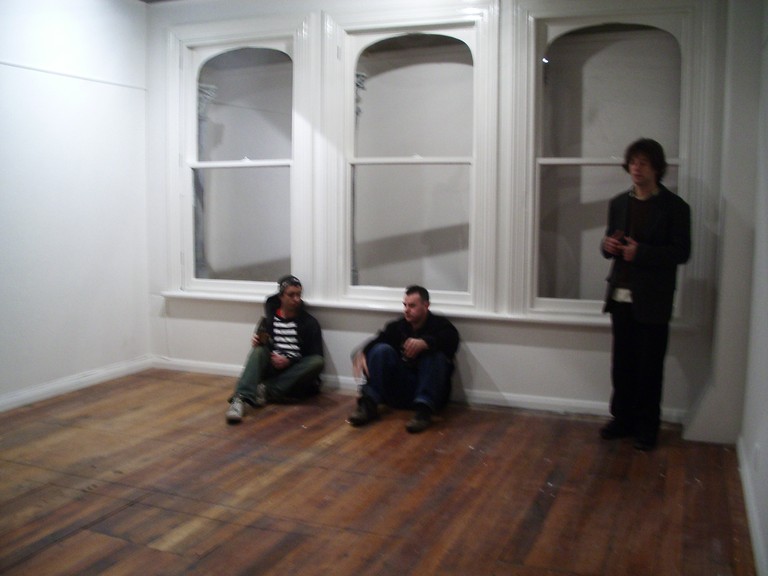 Within the context of Fiona Connor’s show, and even within the pre-history of the site that Enjoy Public Art Gallery inhabits now – the former Alba Bett Gallery – both galleries, Enjoy Public Art Gallery., and its predecessor, Enjoy., provide an interesting historical motif for the operation of art in the confines of an artistic community. Fiona Connor’s work in this instance creates a convergence between different sites of art production and gives them a significance that is at once monumental, in its signification of the original Enjoy site, and productive, as it manifests in the continuing production of art work. In this sense, it could be characterized as being both nostalgic and anti-nostalgic concurrently. This brings me to a comparison between Connor’s show and the beginnings of Enjoy.

Artists Cairan Begley and Ros Cameron graduated from Ilam in Christchurch. The most significant show that Begley, in particular, had exhibited in before the move back to Wellington was an Oblique Trust event: Thoroughfare, held in the Christchurch suburb of Sydenham.4 The artists involved were asked to contribute site-specific works towards a show that was concerned with signifying the history of interacting with, and reflecting, social imprints within the commercial sites left empty in Sydenham.

Founded by Begley, Cameron and their friend Rachel Smithies, Enjoy initially got off the ground, in 2000.5 The submissions for the initial series of exhibitions called for a proposal that engaged with the particular architectural and structural elements of the site of the gallery itself. The very first show involved the removal of the windows facing towards Cuba Street. 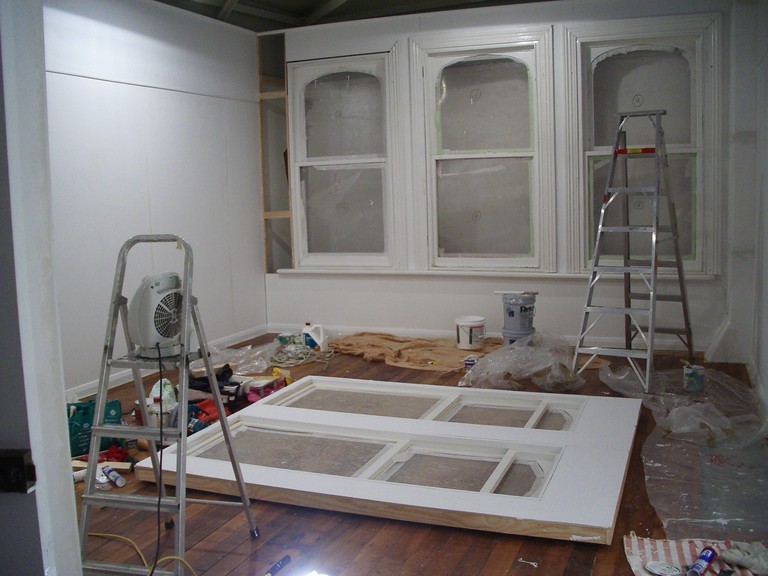 Dan Arps responded by including a viewing platform in the gallery as some kind of visual spectacle. With Inner City Real Estate, Fiona Connor was able to articulate the duality of that which occurs in art spaces and the importance of the spaces in themselves, by embedding the two within one spatial location. 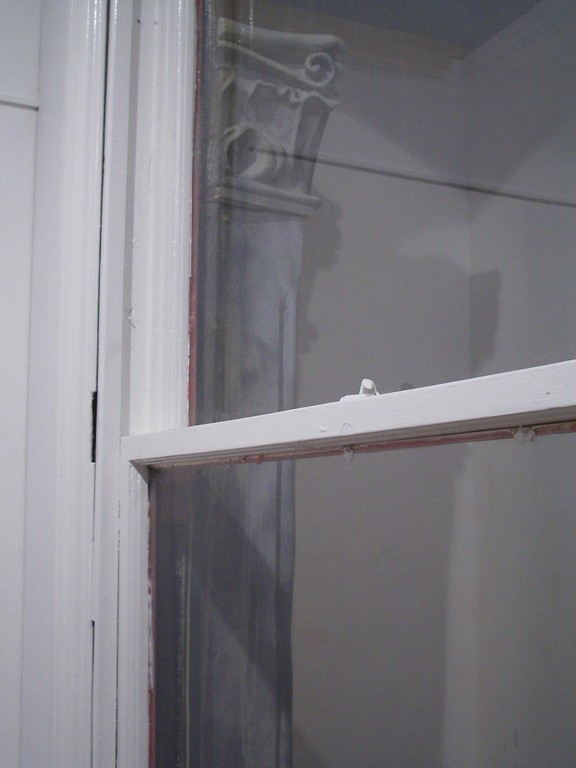