Violet Faigan’s interest lies in re-assessing the value of by- gone objects, whether through managing her vintage clothes and jewellery store “Modern Miss” in Dunedin, or creating works which incorporate second-hand or old materials. Tessa Laird described Faigan’s approach to the past as being redemptive, that her practice incorporates a charitable act of resuscitation, but notes that Faigan feels no pity for the objects she salvages.1 It is the changing world that deserves our pity rather than beautiful, restored remnants from the past. Invited by Enjoy to stage an exhibition of new work, Faigan wove together a collection of recovered objects, things from the past forgotten or ignored. With money (literally) taking a central position within the exhibition, and its coincidental relationship to events in New Zealand at the time, Deflation established a critique of worth and exchange.

When it comes to a matter of economics, it seems we are far more likely to hear and use the inverse term, “inflation”, than that chosen as the title of Violet Faigan’s exhibition. For me, the verb “deflate” is more connected to feelings of disappointment, a sense of anti-climax and dashed
expectations, rather than being connected to ideas of the rise or fall in the purchasing value of money. These more poignant associations are intentional I’m sure, as Faigan positioned this exhibition within a larger questioning of how we value both things and people within our culture. It was only after Faigan had developed her exhibition that she discovered its timeliness – the added poignancy arising from New Zealand’s phasing out of our five-cent coin and introduction of new legal tender.

The space was moodily lit; reminiscent of a temple or memorial. Selected works were picked out with humble desk lamps, sourced from another time, focusing our attention—or perhaps worship —towards make-shift icons and relics. Centred within the square of the gallery an ornate disc- shaped formation on the floor was lit from above, as if a heavenly shaft of light beamed in through a hole in the ceiling. Like the Tibetan sand paintings this resembled in its mandala shape, the work was intricately composed. The process and detail of the formation also questioned the prosaic and readily available materials used. 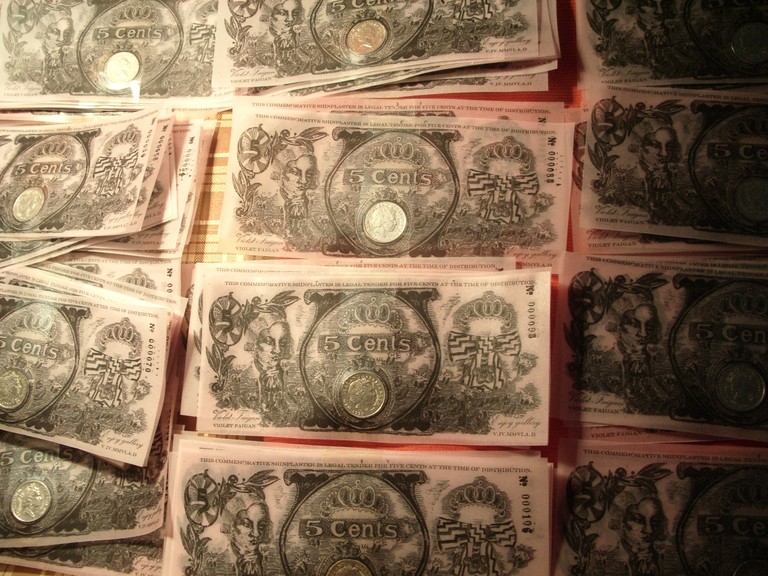 Tibetan sand paintings, constructed often by teams of Buddhist monks, can take days or weeks to finish as thin straws of dyed sand are poured into patterns. Shortly after the painting is finished it is swept away, its destruction used as a metaphor for the transience of both material possessions and life itself. To Western minds it is perhaps a bizarre practice, the monks’ labour having no visible remnant after the work’s completion.

This central mandala-shaped feature was comprised of coils of fake pearls and beads, New Zealand’s now-redundant bronze one and two-cent coins intermittently spotted with clumps of dust and lint. Beads have been used throughout history as stand-in currency, particularly in some West African countries where barter is still readily practiced. The pearls spoke of another era, yet together these disparate materials gave the appearance of a large antique jewel, a dusty and hugely enlarged brooch found in your Grandmother’s jewellery box.

In a cursive script running along the length of a wall were the words “Artist’s fee” fashioned from stacks of five-cent coins. This sight stirred nostalgic remembrances of being a child and trying to comprehend that there were ONE HUNDRED CENTS in a dollar, and what an impressive manifestation of this could be constructed with towers of coins. Here Faigan allowed herself this child-like fantastical indulgence, converting the two hundred dollar fee provided to her by the gallery entirely into our smallest denomination of coin. It reminded me of the studies done on our now decommissioned five-cent coins. Researchers discovered that most people would not value a five-cent coin with the effort required to pick one up if spotted on a footpath. But what if there were twenty or one hundred five-cent coins on a footpath? Small coins are what you find in between the cushions of the couch or annoyingly get sucked up in the vacuum cleaner or catch in the frayed lining of old jackets.

The coins gave the awe-inspiring sense one gets when anything that is usually seen individually is collected and shown en masse. They also made visible a part of the gallery’s business-side of operating, which is not usually openly talked about or made overt to the audience. It reminded us that the exhibition itself is the result of a transaction, Faigan’s lint and one and two-cent coins are still inescapably commodities.

Faigan made it known that this money would be given to busker and friend Paul Honeybone at the exhibition’s conclusion, a collaborator in the realisation of the exhibition. In the right-hand side corner of the gallery a video work was projected. Faigan had filmed Paul, Dunedin’s iconic busker, in action outside a supermarket, clapping and shuffling in time to his unaccompanied singing. Paul predominantly sang songs from another time: The Beatles, The Carpenters, and The Seekers. Singing with brio and an idiosyncratic cadence, using unexpected syncopation and emphasis, these were individualised interpretations of familiar tunes. Faigan’s inclusion of Paul in the exhibition elevated him to a sort of outsider/cult/performance artist but also provided the ‘bite’ of the show, imbuing equal parts humour and pathos. Busking, one can surmise, is work at its most basic and honest, but also at its most uncomfortable – the constant possibility of public humiliation and one’s ability to make a living held at the total mercy of strangers.

As a captive viewer I felt awkwardly voyeuristic and realised the weight of power a busker places upon their audience. I could imagine the deflation a busker would experience after spending a day performing and earning only small change. However, Paul was not presented in order to elicit pity from us. Faigan explained that he enjoyed busking and lived comfortably. It became clear that visitors needn’t feel like passive observers of this performance. On the floor a violin case was filled with Faigan’s own currency. Each note had a five-cent coin embedded within its pink plasticky paper and could be “purchased”, or more accurately swapped, by viewers for a self-nominated amount of money placed in the case.

For some time Canada had a twenty five-cent note. In that country notes with a value of less than a dollar are known as shinplasters, due to the thin and easily destroyed paper used, like a plaster you’d put on your shin. Shinplasters were literally worth the paper they were printed on. Faigan played off this notion, for her shinplasters were clearly ‘worth’ at least the five-cents of each note we could see, but surely much more as the whimsical ink drawings printed on them made them objects of beauty too.

While buying money is in some respects odd, I mused on the various occupations in our society of banker, stockbroker, insurance sales people and loan sharks for whom this is normal. Deflation set up a series of oppositions which Faigan then proceeded to confuse; between old and new, Western and Eastern, insider and outsider, work and art, art and life. This was political art at its most seductive and beguiling. 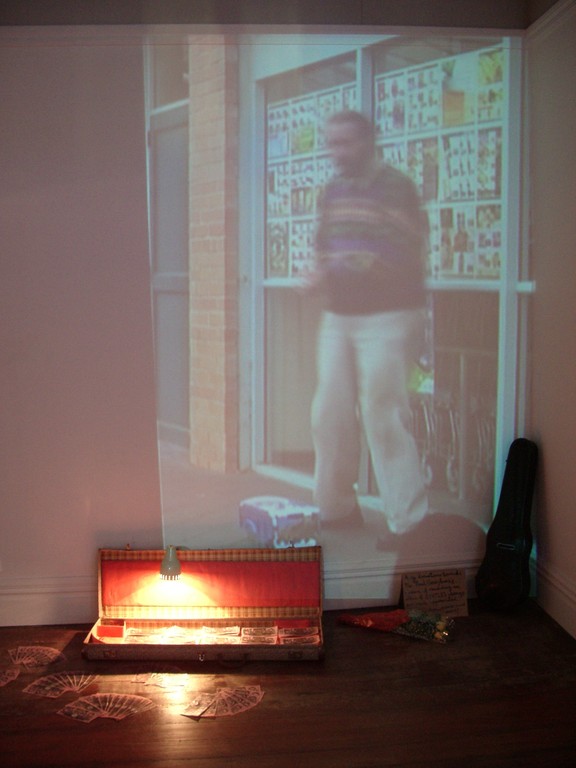