Caroline Johnston frequently admired this particular upended tree root as she passed it on walks in Aro Valley before deciding to haul it away for a new life. Transplanted from the side of the road to Enjoy’s gallery space, the stump was set afloat, drifting far from both its original home and the site where it had subsequently been abandoned. The Lucky Sod was elaborately decorated with wooden finials; gilded, varnished and beautified. Blood and bone fertiliser, glitter and dirt were applied to create a loose pattern around both the base of the stump and the circumference of the gallery in a late-nineteenth century Victorian style. The installation was elegant, in a polite Anglican way, but executed with unrefined materials – the contrast generating a satisfying sense of incongruity.

On warm days, the stench of the fertiliser wafted through the space. Its odour was reminiscent of gardens, the systematic selection and organisation of nature, of efforts required to encourage growth when settling plants in new conditions. Here on display was a structure developed to efficiently obtain nutrients from the soil, rendered obsolete – dug up, dislocated and severed from the rest of the tree – now considered useful only as an ungainly object.
An intriguing entity nonetheless, the stump was somewhat over-adorned, like an older woman wearing excessive jewellery. The imposition of colonial trappings and artificiality of the turned wood finials were juxtaposed with the organic curves of the unruly tree roots. Although the tree stump was cleaned up and swept into order, clumps of dirt and soil remained. This created an unusual or inconsistent combination of natural and synthetic, a hint towards the futility of attempts to enforce conformity and in general our inevitable human fallibility.

Johnston’s dusty, decorative frieze extended around all edges of the room, echoing the skirting board, and so the entire gallery space was utilised, thus incorporating and referring to the institutional architecture. Despite critique of the white cube aesthetic and ideology being an old and favoured argument, the clinical white gallery space still operates as the primary mode of presentation, even in less formal spaces such as Enjoy. With the introduction of a grubby brown stump and little piles of earth, this habit was mocked, the notion of a revered space devoid of external interference and the autonomy of art objects sent up or exposed as foolish. 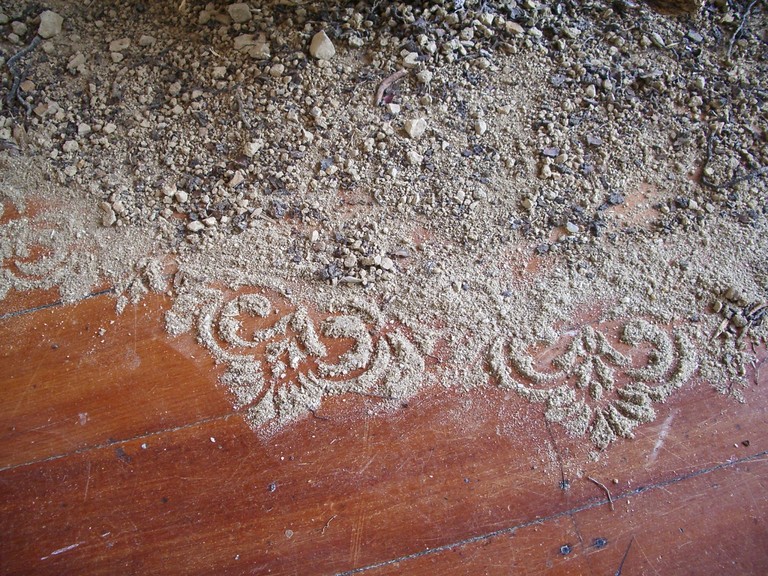 The solo forlorn stump situated within the spacious room also evoked concerns over deforestation of native bush. In this way, it also offered a connection with New Zealand painting of the 1930s and 1940s. The dead tree theme has played a significant role in New Zealand art history, as numerous representations have created discussions of this mournful and nationalistic motif within the landscape.11 Painters of the time articulated an ecological awareness but also proposed the dead tree as an emblem of settlement, the transition between natural wilderness and cultivated farmable land; an important sign for our national identity. Lucky Sod makes a pastiche of New Zealand art’s obsession with landscape and identity. It offers a critical sculptural reading, re-using the tree stump as a symbol for the clearing of indigenous land in the assertion of colonial ownership, as well as the dislocation associated with urbanisation.

In Johnston’s Lucky Sod, the once-living form was revealed as static and immobile when transferred to the gallery. Its organic appeal was distilled or cloaked in stuffiness and the emphasis shifted to its unusual character and beauty as a functionless object. Perhaps this was also a reflection on the attempts of contemporary artists to bring certain aspects of everyday life into art. When housed within the confines of the gallery, sometimes interesting or poignant observations and interactions lose their potency, becoming illustrations or artifacts.

A few weeks after the conclusion of the show, I walked through a side street in Aro Valley to discover Lucky Sod returned to lush pastures. Happily bedded amongst the weeds, the decorative elements remained but the stump was in familiar territory once again and it appeared relieved. I heard that a short while later the wooden finials were anonymously removed and Lucky Sod was thus repatriated and independent, or maybe just pleased to be out of the limelight, ordinary and back to earth. 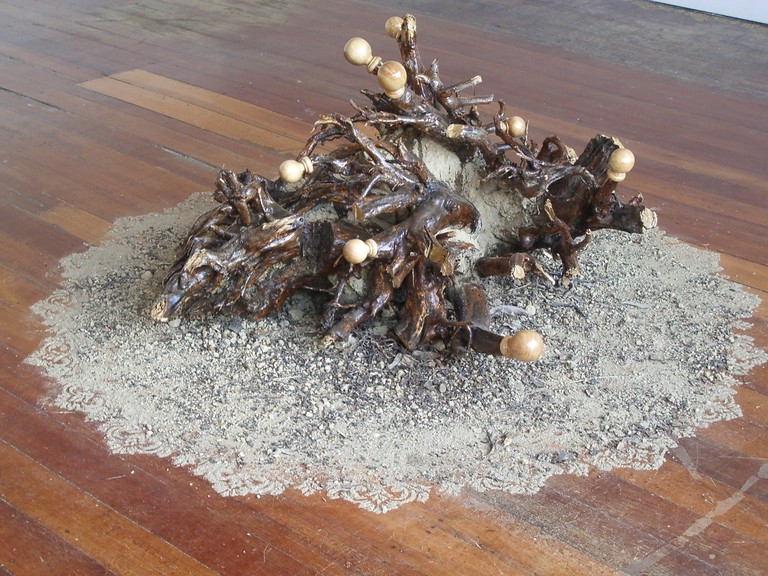