Mowing down the puppies, and other suburban stories

“I have lost something ... I didn’t always feel this way ... so sedated”. Lester Burnham1

In the opening sequence of American Beauty, the camera flies over a suburban street while Lester drearily intones “in a way I am dead already ... ” giving cynical voice to the oh-so-bloody obvious: suburbia equals death. In fact, suburbia equals sedation, then death.

Upon walking into the exhibition Green Belt Video Suburb, I am greeted by that same sense of soporific suburban death. The hypnotic rhythm of a fake heartbeat anxiously wraps itself around me, uncomfortably. This slowed-down musical sample transmogrifies into an unrelenting, suffocating memento mori. Here, suburban objects and fragmented images are glued together by this pounding reminder-of-death.

Behind the lawnmower, there is a decorative motif on the gallery wall. Brown vinyl-cut silhouettes of long uncut grass—disorderly and chaotic—subvert the notion of an orderly suburb. If the lawnmower is about impotence and societal control, this grass is about transgression. This juxtaposition highlights both the emptiness of the suburban promise, and the fenced-off “reality” of the suburban desire for order. Fences feature in the production of suburban normality: markers of ownership, they also function in a disciplinary role. Guarding against disruption that threatens to spill out beyond the manicured lawns and neat paths, the disciplinary nature of the fence is crucial to the possession and ordering of space.

Bulent Diken and Carsten Bagge Laustsen discuss social order in their text The Culture of Exception, noting that taking possession of land is what gives society its order and orientation: “The origin of culture and law is not the word, which links strangers together, but the fence, which separates them.”2

Within Green Belt Video Suburb, these ideas of separation are framed by two constructions. One is a circular mosquito net, which hangs from a spider-like skeleton fixed to one of the gallery rafters, draping to the floor and forming a giant spider web enclosure. It is empty: but is this a warning or an invitation? The artists seem to be cheekily asking: are you in or out? If you believe the promise, step right into the spider’s parlour. But there’s an underlying suspense – if you enter, then how do you get out?

The other construction is a cheap mass-produced plastic greenhouse. Like the empty wine bottle cooler propped up in the corner, it speaks of indoor / outdoor entertainment, the promise of The Good Life. Here suburban aspirations and keeping up with the Jones’s have been staged for the gaze of those poor unfortunates who are excluded. This enclosure also houses the second heartbeat-emitting speaker, plus two flimsy outdoor lanterns with built-in bug zappers. There’s a dawning awareness of something a little darker at work here. Break the rules, and horror lies in wait. Fly too close to the light and – zap – you’re dead: the exhibition is a darkly humorous comment on life in the ‘burbs.

“We are witnessing a cyclic process of creating spaces of indistinction: discipline followed by control, followed by terror, and then the return of discipline as the reversed panopticon.”3

In American Beauty, the new neighbour Ricky Fitts is presented as an outsider. We learn he has been in a mental institution – a place where those who transgress are locked away. Once back in the suburbs, his very presence disrupts order and discipline. He is a paradox: implicated within the suburban patina, and yet still an outsider. In this exhibition, the artists are interested in this paradox of inclusion / exclusion, themselves travelling nomad-like through a suburban landscape. Like Fitts, they document and make observations, measuring the distance between idealised fantasy and reality.

Installed on the Enjoy gallery walls, there are two photographs of a white horse. Tellingly, one image shows the horse behind a fence; the other is a close-up. The white horse is an idealised symbol of potency and fantasy but, contextualised within this exhibition, this white horse becomes another symbol of suburban inclusion/exclusion. Pony clubs and little girls’ fantasies. In or out. Closer inspection reveals that Jenny Gillam has instead presented a photograph of an old nag. Once white, this mare is pictured grass stained and looking—quite frankly—a bit past it. Dog tucker. Fantasy crashes into realism: we’re looking at an already dead horse. And dead puppies. That’s what Gillam calls the three photographs of young pedigree dogs.

The wall mounted photographs present puppies caught in time, like stuffed trophies twisted and posed to look ‘natural’. Frolicking in long grass, there is something potentially horrible in their playful innocence. As if the pristine lawnmower will roar into life and – like a bad Stephen King movie – mow them down. Perhaps this fantasy belongs in the video edits playing out on the four small screens. Attached to the walls in pairs, these are the kinds of video screens you see attached to the back of car seats. Portable sedation, look, you can pack it up and take it with you!

The videos play mixed-up images of violence, horror, murder and angst. The source movies are a mix of 1970s American horror movies, New Zealand films—the kinds of movies you’d pick up from any suburban video store—and downloads from the internet. Audience members familiar with Jenny Gillam and vjRex’s previous collaborations will notice the snippets of videos that have appeared elsewhere, re-contextualised and re-edited for this exhibition. This time the script is murder, sex and violence in the ‘burbs: women being stalked, women screaming, murders that have happened, murders about to happen. Dead bodies. An eternally buzzing fly punctuates a mountain scene featuring a grainy black and white hand holding a brutal looking knife. There is an almost David Lynch- like surrealism, where the logic of a narrative is de-stabilised and then somehow re-interpreted but never explained. These unstable, floating images magnify a sense of anxiety, displacement and disquiet.

A twist to the story was played out at the closing night performance (in collaboration with fellow artist Kaleb Bennett). An intense forty-minute performance that built upon this base layer of suburban anxiety, turning up the volume into a king-hit of violent imagery and full-on noise. 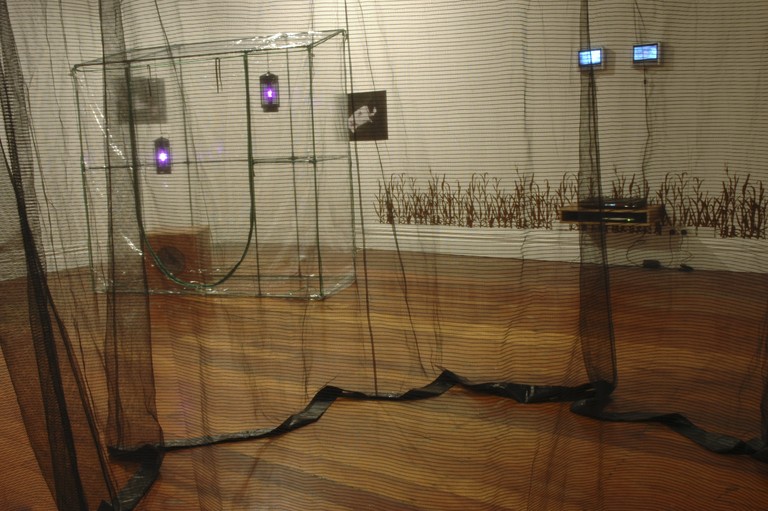 Physically uncomfortable in its aggression and rawness, the performance marked a clear shift from this show being an observational experience to that of being an experiential, bodily experience. Julia Kristeva describes this kind of transformation when she talks about the dynamic of performance which “drives, charges, bursts, deforms, reforms, and transforms the boundaries the subject and society set for themselves.”4 Similarly, the Enjoy gallery audience experienced a distinct shift of corporeal boundaries as the murder script cranked up into a tight edit of bloodied mayhem, terrified women, dumped cadavers, mutilated bodies.

Working reactively to the installation and audience, Bennett’s sound work meshed with the moving, morphing, repeating visuals being played out on the video screens. Together, the three artists set up their own suburban ‘abrasive encounter’ and forced it right back on us. Theatrical and transgressive, their performance was in itself a kind of confrontation with the authority of disciplined society – as much as it was an encounter with middle-class suburbia.

Suburbia could be described as a cultural wasteland between the vibrant, edgy inner city and the rural idyll. But Jenny Gillam and vjRex’s suburbia is nothing of the sort. Not only does their suburbia have the trappings of middle- class aspirations bordered with neat paths, it also has sex and violence. It is a culture of contradictions informed by late-night horror movies, and yet it still exists in an everyday world. It acknowledges the debt to schlock horror movies where the screaming female victim is chopped up into little bits, as much as it pays homage to K-Tel wine coolers specially designed for those endless summer evenings of indoor/outdoor entertaining.

But theirs is not a sedate stroll through suburban detritus. Instead, the artists have presented us with a Joseph Conrad5 journey into a lush kind of anxiety and darkness, complete with machete – or was that a free set of steak knives? 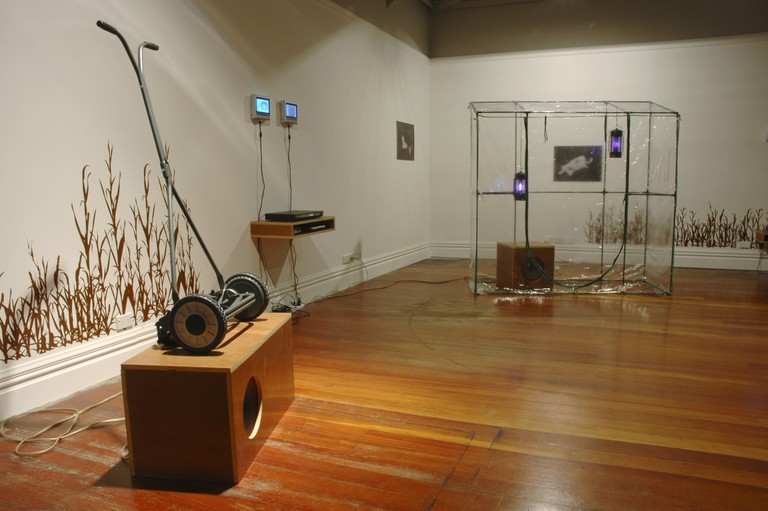