P.R.I.E.S.T. (or Pacific Rim Inaugural Emergency Shelter Trienniale) saw Hamish Palmer and Julien Dyne in collaboration once again. The pair has made work together over a number of years, with ideas often originating from the underbelly of contemporary culture: relishing bad jokes, poor taste, and low or popular culture. An interest in seriality is also apparent. These ideas are most evident in their exhibition titles: Space Invaders (1999), Traveling midget circus hometown beauty pageant (2000), That’s not some object you’re talkin’ about, that’s my baby (2001), Weekend at Bernie’s (2003, with Dave King) and Weekend at Bernie’s 2 (2004, with Dave King).

Nothing is above, or below, or too banal for their parody. Contemporary art is first in the firing line. That this one room, one gallery exhibition of two artists could constitute a ‘Trienniale’, one of those glitzy über-exhibition, artworld Meccas (and shouldn’t that be ‘Triennial’?) is ridiculous and hilarious. The pair’s exhibition aspirations are undermined further in their proudly lowest common denominator content.

The kumara or sweet potato, grown for its edible swollen roots has a long history of cultivation in New Zealand. Brought here by the early Maori settlers over one thousand years ago from its Pacific Island source, it was widely grown especially in the semi-tropical regions of the North Island.1

P.R.I.E.S.T. is about things, everyday banal things like Auckland’s inorganic rubbish collection, detergent bottles and tennis balls. It is also about its anti-thesis: big things, weighty things like National Identity, New Zealand’s history as a colonised country, the introduction of Christianity and the cultivation of the land which we have historically relied on for exports and economic growth.

The adaptation of a plant ... to the temperate New Zealand climate, involving an annual storage phase, constitutes one of the major achievements of early Maori agriculture. Pre-European Maori grew several different varieties of “bush” kumara, but compared to the varieties we eat today, were very small in size, being no bigger than a person’s finger.2

Palmer approaches the objects of his work with reverence. The manufacturing lines of a kumara factory are portrayed like temples complete with a mystical glow and the kumara depicted as a holy relic. A sunny yellow plastic kumara protector, with the word KUMARA (at first appearing more like a geometric abstraction of triangles and points) emblazoned upon it, has been hung like a religious tapestry displaying an icon or banner celebrating its subject. In another moodily dark image a small church stands guard over a kumara patch, blessing them with its presence. The kumara, we are told, needs protection like a fragile creature. 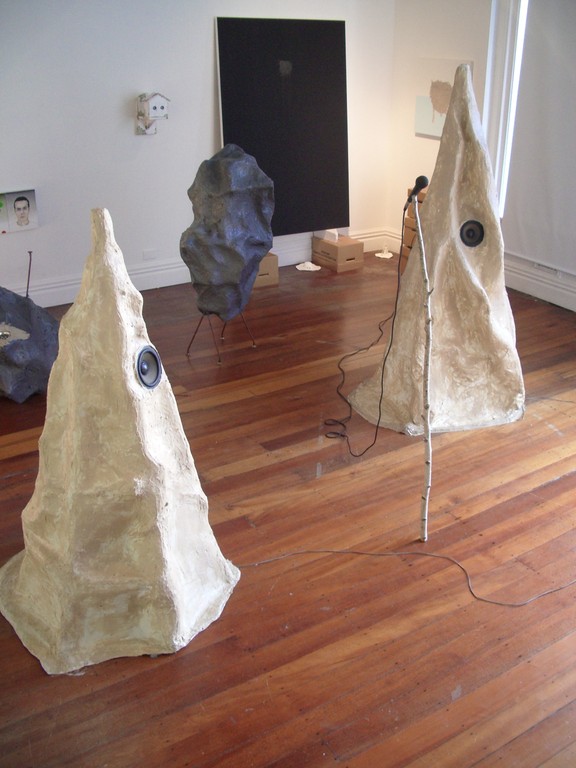 Dyne’s work is less earnest. He mixes organic and inorganic, confusing synthetic and natural. Blobby, gunky termite mounds emit pseudo-futuristic critter noises. His blobs could be meteorites or boulders. Dyne’s sculptures are like drawings that have jumped off the page into the next dimension. A geometrically precise, synthetically square-angled log sprouts light bulbs. An otherwise un-modified tree branch sprouts tens of tennis balls. Real and fake are mixed elsewhere too: a man’s elastic neck-tie hangs, the apparition of an indigenous bird, amongst found mossy branches.

The production of veneer, plywood and fibreboard and particleboard has increased dramatically in New Zealand in the last ten years.4

The viewer walks around the show, intrepid like an explorer in a foreign land. Do you speak into the microphone? Or look inside the bird huts? Peek into the peepholes? Notice the paint-covered kitsch religious icons or the polystyrene props for paintings?

The kumara we eat today has evolved from a larger variety that grows on a creeping vine. It was imported in the early 1850’s, and was quickly adopted by the Maori for its superior size and taste.5

At first, P.R.I.E.S.T. seems like a drug-induced game of free- association. Ideas repeated over and over, turned around and upside-down. Overwhelmed, you feel you dare not look at any object too long, lest there’s something bigger, better, weirder or more new to be seen on the other side of the room. Then later, much like the experience one has in an art biennale (or the eponymous ‘Trienniale’) you need some respite. Freud’s “uncanny” is described as being the sense of unease one experiences when an object is all-too-familiar, rendering it unsettlingly unusual. In P.R.I.E.S.T., this familiarity is manifested not as anxiety but as humour. The all-too-mundane is amusingly, titillatingly surreal. Floating forms gel together and click into place. You decide that you must come back in three-year’s time for the next round. 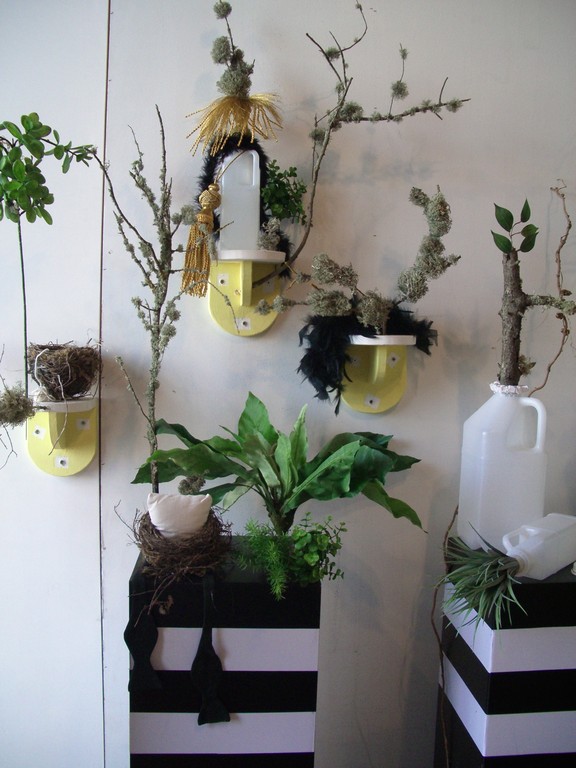