A video in a storage area, projected onto a white wall: a figure with bread dough on its head, pulled down over its face. There is ambient noise and the figure is reading, scanning its head back and forth. The dough has two eyeholes that are becoming elongated as the dough is pulled down by gravity. The figure breathes through a narrow black straw.

Five stills from The Fly printed with an inkjet printer on A4 paper: Jeff Goldblum’s character in the teleport capsule; computer text about the teleportation sequence; two LEDs, one on, one off; the capsule with smoke rolling out of it; Goldblum emerging naked from the capsule.

A UV tube-light is mounted in raw wood materials, standing upright on the floor. “15/15” is written in black vivid on the end of one piece of wood.

Two detailed drawings in black pen on canvas. They include geometric shapes, mountains with windows, eruptions, pyramids, and objects emerging from water. Two men experiment with audio equipment on a desk in one corner while discussing the possibility of a Karaoke night at Valve and the effects pedals they have borrowed. Behind them, a large keyboard leans against the wall. More keyboards, effects

Two men experiment with audio equipment on a desk in one corner while discussing the possibility of a Karaoke night at Valve and the effects pedals they have borrowed. Behind them, a large keyboard leans against the wall. More keyboards, effects machines and a drum machine are on the desk and on the primary-school brown chairs. An amplifier sits on the floor with a cable plugged into it. A tripod-mounted camera points at this set-up with a directional mike attached, not recording. Two rainbow-coloured slippers sit under the desk, a cream jacket hangs on a chair.

An old CRT computer monitor sitting on a beige computer is connected to speakers built into humanoid figures. The figures are made of modeling paste and various items. One has a power-strip and a light for its arms and a meths bottle and shot-glass for its legs. Its body includes pens and more modeling paste. Theotherfigurerestsonafull,wooden, twenty-CD organiser (e.g. Destroy all Monsters – “Bored”; Six Finger Satellite – “Law of Ruins”; Fushitsusha – “The Caution Appears.”) One arm includes a ring of colouring pencils pointed outward. Embedded in the body is a miniature disco ball and a car or television telescoping antenna. 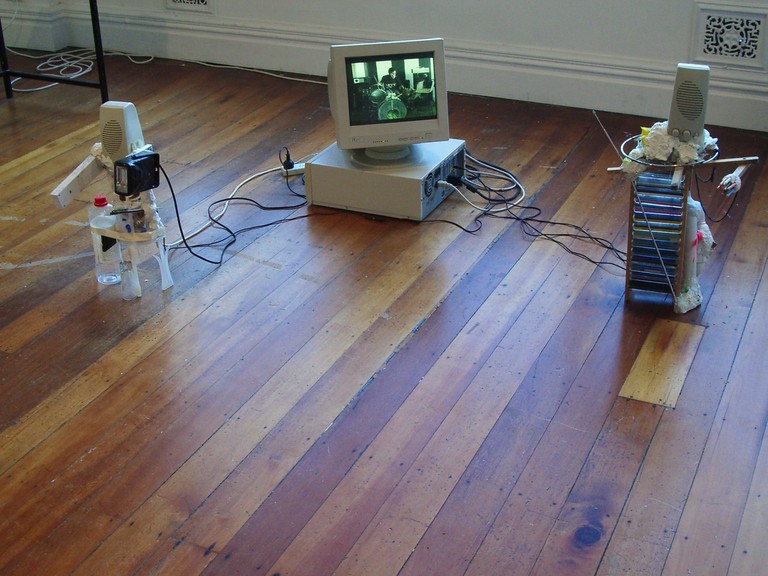 The monitor shows a man wearing a black CATS t-shirt, drumming with a white object strapped to his face, slightly to the left of his mouth. He is surrounded by drums, other musical equipment, and a cane chair. There is a green blanket in the bass drum.

Attached to one wall at eye level is a brightly coloured card in cellophane along with a white, six-track CD called “Miami Beach”. The package says it costs ten dollars on a small dot-sticker. There are more in a clear plastic container attached to the wall below.

In the middle of the room, toward the door, is a display of yellow booklets that cost fifteen dollars each. The catalog pinned to the wall says they are colour-coded, weekly, and come with a CD. The display stand can be folded into a carry-case.

Near the entrance to the gallery is a roll of masking tape lying on two key-rings. Standing inside the roll of tape are pencils, a blue biro, and golden, bullet-shaped objects in yellow foam.

The men in the room discuss leads for musical equipment and long-play tapes. Behind them, a pair of modified sunglasses sits on a high shelf. The sunglasses are painted yellow with blue eyes on the lenses. On the desk is a similar pair of sunglasses, painted green.

The men play music with the equipment on the desk: a beat, modulated tones, the sound of static, and heavy guitar.

The dough in the projected video is deteriorating, pulling down further over the figure’s head. The eye-holes are longer, as is the hole the straw protrudes through. The figure is still reading and there is the sound of turning pages. 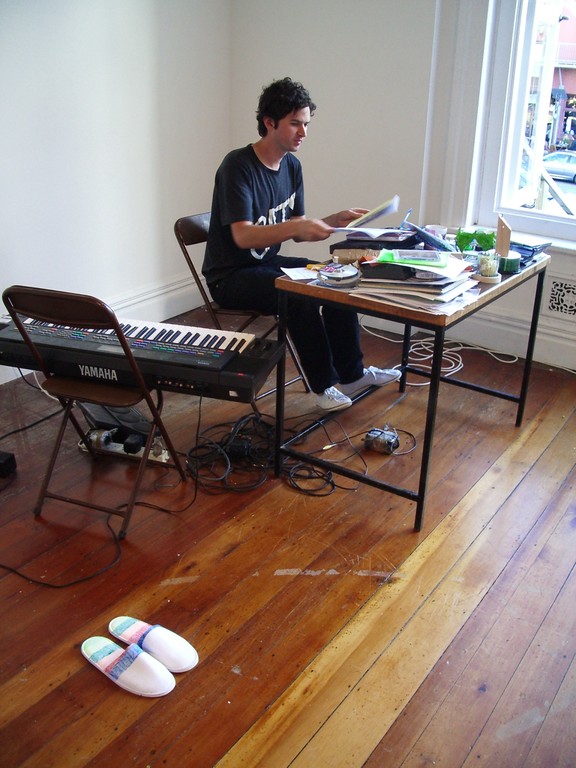 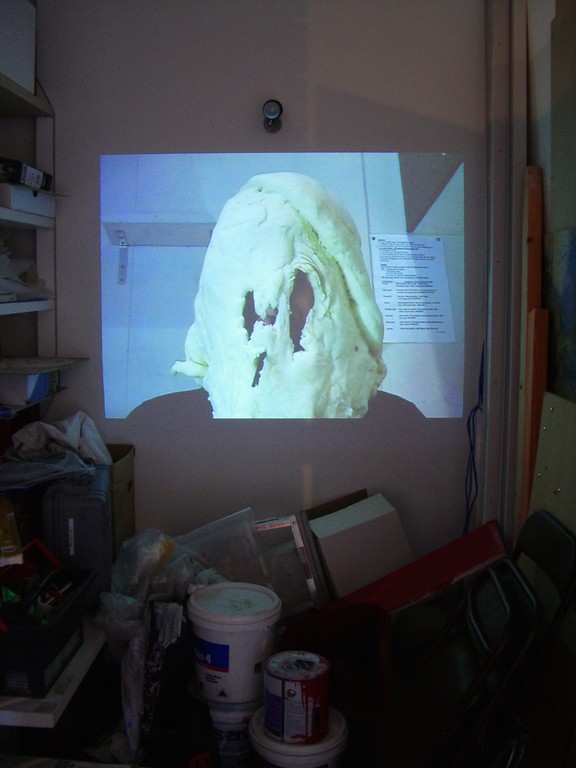