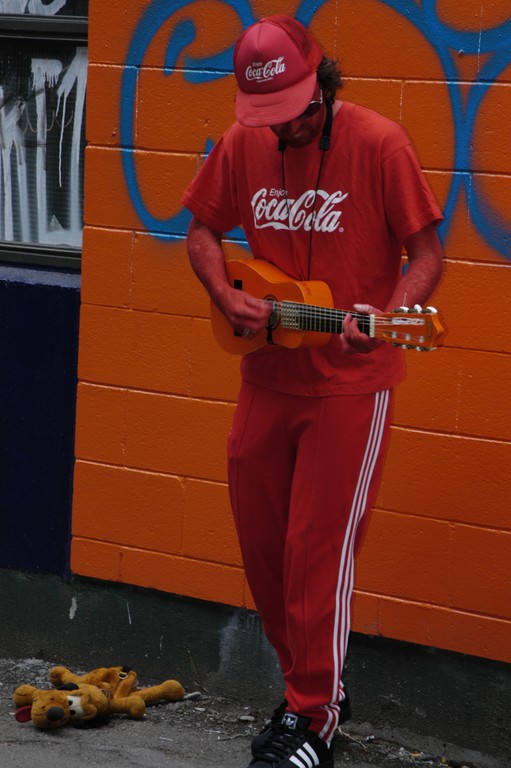 “Performance” is a problematic word to pin to Murray Hewitt’s piece in Enjoy’s 2006 Lasting Performance Series. We were in a back alley off Courtenay Place. I had never been there before and found it surprisingly beautiful—covered in vibrant graffiti, and the rampant green of ivy and weeds. The hurry of Courtenay Place was just a step away, where myriads of small performances are being played out constantly and the public eye is open wide. Instead, Hewitt chose to stage his song in this secluded spot and through this subtle repositioning, reworked the traditional notions of performance.

The small crowd who gathered received a gospel song, sung by Hewitt and accompanied on his small ukulele. He was painted completely red and wore a Coca Cola t-shirt and matching cap, red Adidas track pants and shell-toes with aviator sunglasses. He was like a walking billboard; offset by the brilliant orange wall behind him. Alongside Hewitt sat an American eagle and the Disney character Pluto—further signifiers of consumerism, American cultural imperialism and popular culture.

The lyrics to Hewitt’s song rung resoundingly hollow, “I still believe in non-violence. I will run to be with Jesus. I don’t believe what they say on TV”. Like the vivid brands and mass produced products surrounding him, these earnest words were vacuous and superficial. There was nothing here. It was almost an anti-performance, as every aspect seemed so devoid of real meaning. These were empty words, empty symbols and entirely distanced from this place and time. There was barely even a human performer, as the real Murray Hewitt was hidden beneath layers of red paint. He himself had become a walking signifier of cultural nothingness.

Hewitt’s previous works have dwelt on the visual vocabulary of America and its attendant meanings. Similarly, in this performance we were given a display of the disposability of culture and the way in which meaning can be warped by the re-contextualisation of American cultural artefacts. Everyday life is so inundated by the symbols of America that they are commonplace now, but held up here and displayed in such a blatant way, they are emptied of their significance. As Hewitt so nonchalantly sung his gospel song in a side street of Wellington, he examined the intersection of place and culture and void.