Whose Street is it Anyway?

Beth O’Brien’s beeline was based on the everyday path of Wellington’s Lambton Quay workers. Designed to consider ideas of group migration, mobility and pedestrian movement within the Wellington central city, beeline also prompted questions around audience, participation and authorship. Does devising a work for the street make it more accessible or more democratic?

Artist David Hammons once said “I like doing stuff better on the street, because the art becomes just one of the objects that’s in the path of your everyday existence. It’s what you move through, and it doesn’t have any seniority over anything else.”1

Beth O’Brien invited a range of people she knew to meet and walk their normal route to work, but this time together in line formation. The choreographed performance took a common commuter route and conservative attire was requested. For those viewing the work from the suggested courtyard area above the street, it was a subtle thing to observe. Participants melded with the ordinary early-morning foot traffic and the brief glimpse of beeline was like catching a mirror image of oneself passing a glass storefront.

O’Brien had closely considered the documentation of her project and the lingering photographs and video footage capture this momentary reflection, intended to incite a shift in perception of one’s own journeys and routines.

The idea of distilling a moment could translate to any activity or form of travel, but is particularly resonant with walking. There is a sense of purposefulness to striding, or even strolling, of having a destination and getting somewhere. There is also a feeling of personal space within public areas, as though when amongst strangers on a busy street you are invisible, even if simultaneously exposed and vulnerable. There are other factors to consider – loitering can be difficult and different areas necessitate and encourage certain pedestrians over others, but a busy street is assumed to contain a range of people and to be a mixed-use space. There is a rich history of performance art conducted on the street and an accompaying notion that this is somehow a site of freedom and equality, or that by taking art out of the gallery space you can engage with society at large. 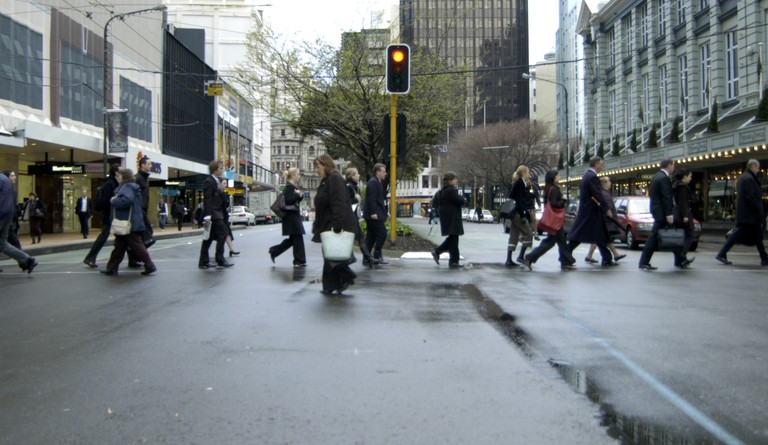 Situated on Lambton Quay, beeline played on the proliferation of workers heading in the direction of the Beehive parliamentary buildings. Predominantly corporates, professionals and those that serve them, the herd on this street hasten between home and office each morning and night. As she co-ordinated and followed a group instead of an individual, O’Brien investigated our collective actions and behaviours, highlighting how our movements are prescribed by the architecture of public spaces and perhaps not as independent as we believe. Despite the ability for individuals to contradict the norm, beeline deployed a very particular pathway to emphasise how urban planning influences our movements and how a general collective consensus on appropriateness defines and governs some lives.

Observers and other pedestrians may have noticed something slightly peculiar about these performing walkers, but beeline was intended primarily for a select art audience. Rather than proposing her work would find a significant reception with those already on the street, it was the audience solicited through Enjoy that O’Brien nudged outside to take a look around. The audience gathered to watch the procession from an office courtyard deck. By dislodging the act of walking to work from the customary vantage point of the street, and magnifying it through the lens of art, the artist detached it enough to open up discussion. The act of separating and giving ‘seniority’ to art, as distinct from everyday existence, is precisely what enabled our consideration, review and commentary on the commonplace. In requiring the audience to deliberate on a simple part of life with beeline, O’Brien asked what democracy and liberty mean within society, instead of assuming they exist in any greater quantity outside of, compared to within, a gallery space.