Slowly, Gently, Confidently proclaimed the beauty of the humble bucket. Through a video projected at one end of the gallery space and a distributed handout, Gemma Tweedie offered exuberant suggestions on how this simple but essential everyday item could be enjoyed. “Throw and catch a bucket!”, “Put many buckets on!” and “Stroke a bucket tenderly.” These directives, reminiscent of Austrian artist Erwin Wurm, encouraged the audience to actively explore a bucket’s potential, to consider and find enchantment in such an ordinary vessel.

As audience members arrived, Tweedie was carefully stacking buckets to create a long wall that divided the gallery in two. Shiny, red and new, the many buckets gradually obscured visibility between the artist and assembled crowd. On the audience side, buckets lay scattered ready for use. On completion of the wall, a video of Tweedie performing various activities with buckets commenced, projected on the back wall of Enjoy. The sounds emanating from her side of the wall, of buckets crashing or water sloshing, were echoed by our own noises and it slowly became apparent that Tweedie was also performing the activities in time with the video.

Like Bruce Barber, who performed Bucket Action in 1974 with a bucket on his head and a fish in his hand, Tweedie was performing blind, with no opportunity for gauging audience responses to her slightly ridiculous gestures. However, in keeping with shifts in strategies towards interactive engagement since the performance practices of the 1970s, Tweedie hoped audience members would actively participate, as suggested: Slowly, Gently, Confidently.

The handout featured Tweedie supposedly smiling encouragingly from behind a bucket and the project was designed as a supportive environment for joining in. The audience was not shy. Some modestly followed Tweedie’s video prompts or created their own actions, whist others revelled in the opportunity to play. One participant even dumped an entire bucket of water over his own head. In this way, the relationships between audience members were important. A sense of comradeship developed as they shared in this experience and performed for one another. 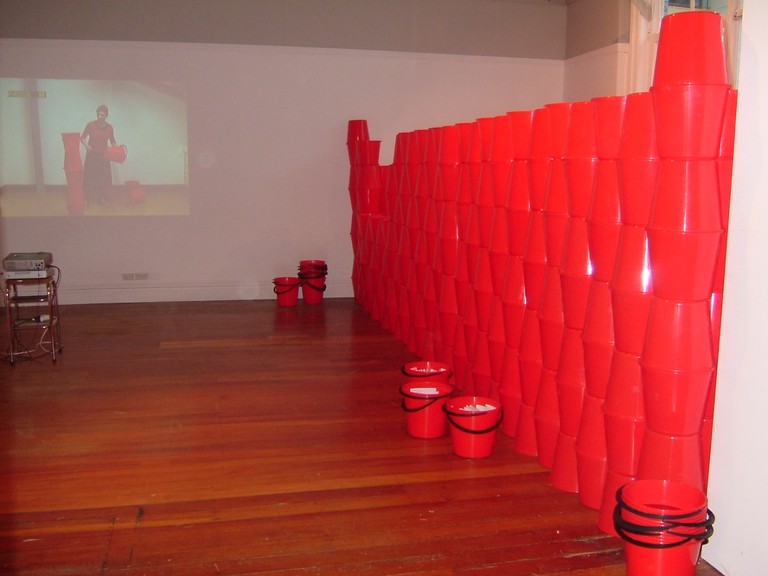 The conclusion of the performance unearthed the delight of the audience at their role in the project, as together artist and audience brought the wall down, before the buckets were packed ready for return to The Warehouse, their place of purchase.

En masse, the buckets were a striking sculptural feature. A luminous construction, the wall also exposed the buckets as yet another cheap disposable plastic consumer item. With the current cacophony of environmental issues and renewed anti-capitalist convictions, these objects poetically assumed
a political stance. By selecting only red buckets and then dividing the room with a wall of these, Tweedie emphasised their industrial production, hinting at our increasingly globalised economies and communist histories.

Slowly, Gently, Confidently embodied optimistic ideals for the individual and the collective, democracy and freedom, even utilising the bucket, a tool frequently used for cleaning. However, as nursery rhyme character Henry found when attempting to fix the hole in his bucket, there are no easy solutions for mending things. Though means for stemming a leak abound, significant commitment and resources are required to improve a situation. What Tweedie offers us is a substantial supply of enthusiasm and buckets at the ready.