Can you hold the line please?

A telephone receiver was strapped to a makeshift microphone stand in the middle of Enjoy Gallery. From a couple of speakers set on the floor, experimental sound compositions breathed into and animated the space. It could have been unusual hold music, played while you waited for a real person to get on the line. Inversely, it was G-fab and the meat pack, live, ready and willing to respond to whoever entered Enjoy.

People drifted through the performance over this quiet Saturday afternoon. Offsite, and as such unaware of the idle atmosphere, G-fab and the meat pack energetically broadcast down the telephone from somewhere across town. Despite their dislocation the performers were offering the opportunity to join the band. The enticing empty microphone and apparent lack of surveillance lured some audience members to contribute their voices and brave participants were rewarded with immediate replies. In other cases their input was incorporated into ensuing sound. During the performance occasional questions, prompts or directives were issued, otherwise G-fab and the meat pack forged on happily, leaving their invitation as an open call for contributions and allies.
Operating from a distance, radio broadcasters often become an integral part of our lives. Transmitted to our living rooms, bedrooms, kitchens and cars their chatter and musical choices accompany our daily routines. Over time, listeners learn many facets of their personality and through selection of station choose to align themselves with certain characters over others, as though they are omnipotent friends. Although presented in a semi- public space, there was a similar sense of intimacy to the G-fab and the meat pack performance. With the possibility for comments and exchanges and the acknowledgement that this was a performance for a specifically Enjoy audience, it felt personalised despite the absence of physical immediacy. Like a chatroom where those participating can communicate without identification, here was the chance for both sides to play up personas or unorthodox relationships. 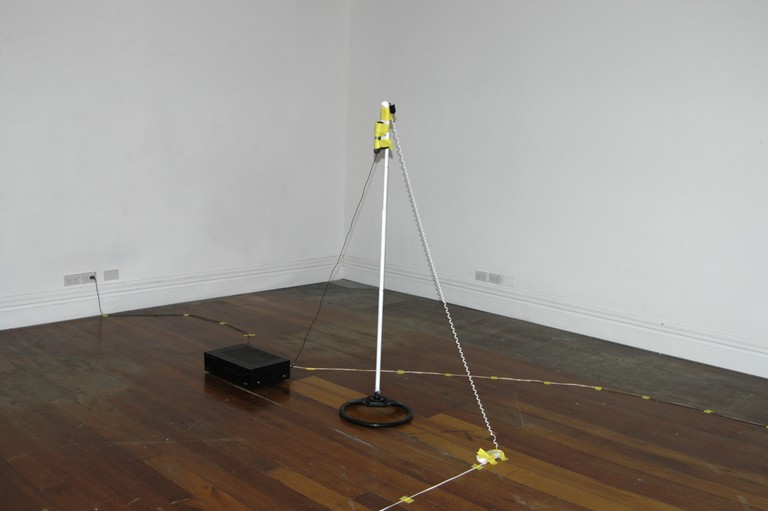 The space became a room for bouncing ideas and sounds. Without the demands of a live performance or obligation to a radio network, G-fab and the meat pack were free to perform uncensored, liberated to perform in truly narcissistic fashion. At a remove from the public interface, they allowed access to their usually personal rehearsal activities, and encouraged more active participation in return. However, the audience members were also performing the work for one another. Highly aware of their positioning and appearance, visitors in the space could be viewed and implicated, making the interactive role one of playful but vulnerable exhibitionism.

In some ways the performance structure harked back to the age of adolescence. It evoked the clichès of teenagers hibernating in their bedrooms, simultaneously devoted to solitary creative ventures and the telephone, mobiles and internet friend sites. Holed up in a venue across town, G-fab and the meat pack leaked their practice out into the world in a way that invited quick-fire appraisal. The fabulous/ fabricated G-fab and her invaluable sidekicks the meat pack enlivened the Enjoy space, offering commentary on contemporary forms of communication whilst plying others to connect with their adventures in music production and reception. In constructing a unique ambient environment they stressed the importance for us all to both plug in and listen out.