Two women sat aside each other, under a confusion of wires in the centre of the gallery, each delivered verbiage from sheets of conflicting narrative prose.

Snippets of stories, anecdotes and poetry were detectable, yet the brevity of each speaker’s delivery, and the likelihood of interruption by the other made comprehension difficult. Their pace became more wearying as they speed up or slowed down unexpectedly.

Each woman seemed dressed in the uniform of another era. The buttoned up and buttoned down dresses reached beyond the knee, reflecting the conservative values of 1950’s New Zealand.

An electric kettle was boiling. This prop, a sage-green kettle in the rear left corner of the gallery also seemed to be on  loan from another era—one of lesser domestic convenience. The pluming exclamation of the kettle became increasingly urgent as the water passed boiling point. No one stopped to shut it off.

This was Raised by Wolves, featuring Amy Howden-Chapman, Biddy Livesey and Bevan Smith conducting an investigation into the effect of atmosphere on human interaction and perception.

I saw it as a telephone exchange, with Bevan Smith acting as master operator. In a process that remained mysterious to the audience, Smith controlled the flow of information, creating a layered and interesting collaboration. At the conclusion of the spoken ruckus Biddy Livesy brewed tea. Surely the water was spoilt. 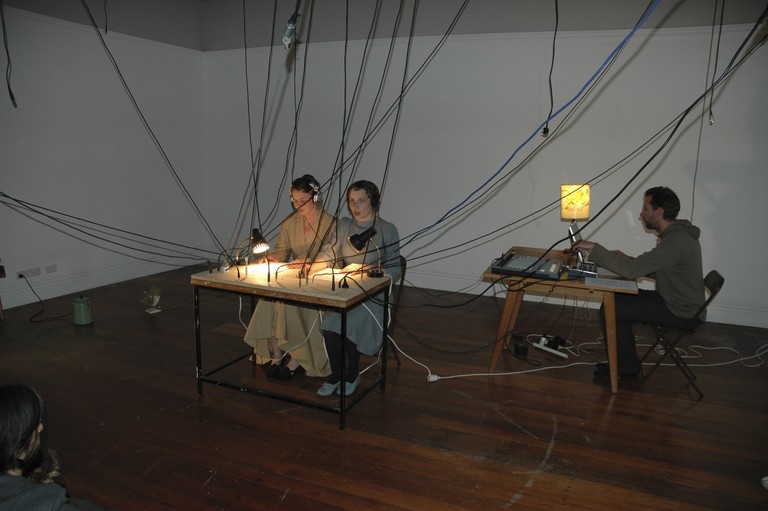