There’s a lot to look at, listen to, sense, and think about here. After a while, having stepped into the room and eventually begun to look around, I have the feeling I’ve walked into the middle of one of those moments when I’ve turned on the TV part way through a story crowded with characters whose names I don’t recognize and whose back-stories I can only guess at, I’m trying to make sense of the fragments of conversation unfolding between them. Trying to make a single sense of this is futile, and what I find I’m more interested in is getting to know the complexity.

When I first walk into the gallery, I am caught by the dreamlike quality of the woman and man floating before me in the two- frame video projection and by the haunting allure of sensual orchestral music filling the gallery space. It’s not so much mesmerizing as calming, lulling – a lilting eroticism – especially after climbing the gallery stairs from the busy and noisy Cuba Street, Wellington’s melting pot neighbourhood.

Artist Sandy Gibbs has filmed a woman and a man each riding a mechanical bull. With all but occasional glimpses of a saddle or a patch of hide, we do not see the bull. The projected video is played in slow-motion and the figures, as previously mentioned, seem to float, brightly lit against a white background. The camera is in each case stationary, as a result the two figures slide in and out of frame, back and forwards from close up to leaning away. In some moments the frame catches their head and shoulders, in the next their waist and hips slide into view. We see her jeans, crimson top and rhinestones, bare midriff, red lips and fingernails, dark crimped hair; his pale blue satin cowboy shirt, white embroidery, tassel trimming, satin pants and cowboy hat.

These are the costumes of metro-sexual cowboys and dating- scene disco girls. Powder-blue satin is definitely dodgy territory for all except fancy dress revelers, if we assume that even the urban cowboy represents heartland masculinity. Gibbs’s setting and characters anticipate an audience aware that such myths of gender may be unstable, so she uses this pale blue satin costume to knowingly pull and push us back and forwards across the masculinity border, just as the hydraulic rams under the two bull riders are jerking them around.

Perpetually unbalanced, each character has their right arm in front of them as they hold the hand grip which sits between their thighs, and their other arms floats out to the side or circles above their head. Mostly the camera only catches their head and shoulders, glimpses the floating arm, and caresses the studied expression each face holds. Each character has a look of calm concentration on their face, mostly gazing down into the space in front of them or between their legs – yes, of course it occurs to me too, that this is like looking at a lover between their legs – and occasionally they smile or register some small flicker of surprise or extra effort and the bull swings them in an unexpected direction. But beyond this, their expression has a quality rarely found in non-documentary film; an introspective delight that transcends acting. Each actor concentrates so much on staying atop the gyrating bull, and therefore remaining in role, that they have an almost- acting, almost-being-themselves quality that reflects – I hesitate to use the well-worn phrase, but none other will do – being in the moment, unselfconsciously. Other factors enhance this state: both the slowed down tempo of the footage, and the fragmented reality created by the absence of the figures’ own breathing and straining, replaced instead by the dreamy soundscape of lyrical orchestra and cello – Franz Joseph Haydn’s Cello Concerto No. 2 in D major. The actors provide a visual presence only and this concentrates the impact of them being-in-themselves rather than being-in-character. 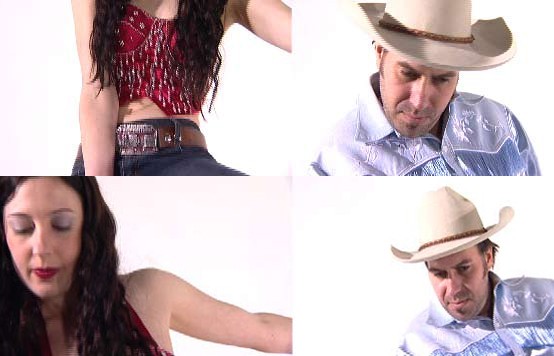 The artist, Sandy Gibbs’ first thought to put the woman actor on the mechanical bull as an archetype of the feminine sitting astride, yet in the power of the masculine. Instead Gibbs found that as she progressively edited the footage, she edited the bull out. In the end, and with the suggestive absence of the bull, the sequence permits us to concentrate on the lyrical dance of the two figures that begin to look as if they might be riding each other in a sexual encounter. The absent bull has become a kind of stand-in for a sexual partner of any gender and either sexuality. Him, her, feminine, masculine, straight, gay – is it clear? Does it matter?

The sliding and floating figures hold my attention for a while before I begin to take in the rest of the gallery space, a densely populated room. Gibbs has peopled her first solo project with a whole bunch of walk-on characters: soft furnishings, soft erotica, hard bodies, Burt Lancaster swimming, a blue unicorn, kisses, slaps, spurs, a dying stag, TV monitors, pink curtains, Jacqueline du Pré’s cello and a boy bouncing on a diving board over the dirty puddle in the deep end of an almost empty swimming pool.

In front of the video projection of the bull-riders is a bright pink upholstered pouf – almost the colour and texture of a plump strawberry – and at its centre, a small fountain, burbling and splashing water from the pouf’s central dimple. What started as a piece of feminine furniture to act as a foil to the thrusting power of the image of the bull has turned into a transgender object – sweet, taut, wet and ejaculating. 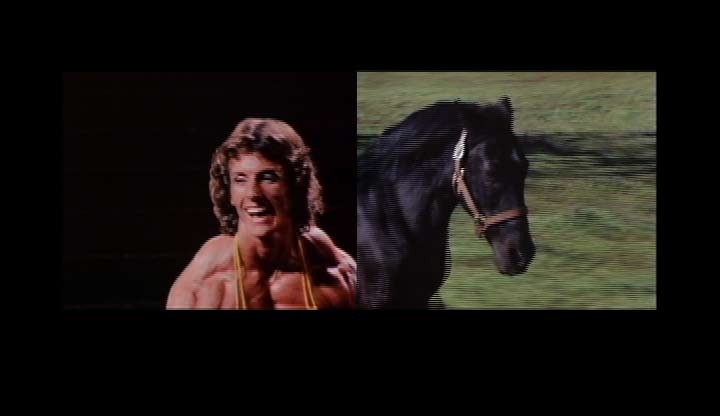 As I turn, bathed in the rosy glow of daylight filtered through powder pink curtains drawn across the gallery’s large windows, I see there is a video monitor on the wall behind me showing a split-screen montage of films– Michael Cimino’s The Deer Hunter (1978), Michael O Sajbel’s The Ride (1997), Frank Perry’s The Swimmer (1968), George Butler’s Pumping Iron II: The Women (1984), and documentary footage from the Tokyo Olympics. Gibbs’ montage juxtaposes Burt Lancaster – fondling a teenage girl, trying to take on a horse in a foot race, rescuing a boy from jumping into an almost empty swimming pool, and swimming through seven or eight Los Angeles backyard swimming pools to return home to find his marriage has fallen apart – with Robert De Niro’s character Michael Vronsky apparently shooting a stag, a suburban fire screen with a stag decal, rodeo cowboys, and Bev Francis; 1977 Australian shot put record-holder, six-time powerlifting world champion, and controversial professional bodybuilder.

Bev Francis’s story epitomises much of the troubled complexity that compels artist Sandy Gibbs to continue to explore images of femininity and masculinity. Francis was catapulted to fame through her role in Pumping Iron II: The Women, as the world’s strongest woman powerlifter. The film casts her in a controversial role within the ongoing debate over femininity
and female muscularity, with her naturally massive size and muscular development challenging preconceived notions about the limits of female bodybuilding. In her lifetime she failed to win a single major bodybuilding competition; some surmised it was because officials decided that TV viewers were not ready to see someone with Francis’s physique win first place.

I am drawn back to the title for this installation – often a suggestive reference point for thinking and feeling one’s way into an exhibition. This title is no exception, for it conjures both sensations and ideas. I’ll leave the sensations to your own memories, while I talk a little about the thinking it conjures with me. “A kiss is not just a kiss”. What is it that the kiss could be if were “just a kiss” – simple, innocent, pure, uncomplicated? When it is more than this, and when the phrase “not just a kiss” is used, it is often in the context of accounts of sexual harassment and acts of infidelity, the duplicity of politicians who kiss in public while stabbing each other in the back. Perhaps strangest of all, a kiss is ‘not just a kiss’ for people with extreme food allergies entering the dating arena – a kiss can be fatal! This kind of kiss, that is not just a kiss, hides something more complicated, sinister, dangerous or wonderful than might appear at first.

Gibbs’s exhibition title seems to suggest that we should not think of the images we see, the sounds we hear and the things we feel as innocent, simple, or uncomplicated. What we find, after scratching the surface a little might not be that terrible or dramatic but it’s likely to be more than what our first impressions reveal. The starting point for Gibbs’s project seemed simple enough but as she developed the work it began to take on a life of its own and showed her a few things she had not expected.

This idea that art might leave us someplace other than where we started is at the heart of the experience for me: sometimes a micro movement; sometimes a transformation.
Where Gibbs started was a place where she expected the show would explore a collision between gender stereotypes. Where did she end up? Somewhere more complicated and slippery: a place where there is less of a collision, more a collusion. The idea of a collision suggests the brutal and damaging encounter of fixed positions, definite articles or concrete realities. Alternatively, collusion suggests agreement, conspiracy, complicity and consent. For the artist, it is as if the definite articles she brought together – archetypal feminine and masculine characters and props – conspired against (and with) her and reached a slippery agreement. As Gibbs manipulated her medium and the ideas moved with her, each began to play each other’s roles, rather than playing the roles Gibbs originally had in mind for them. 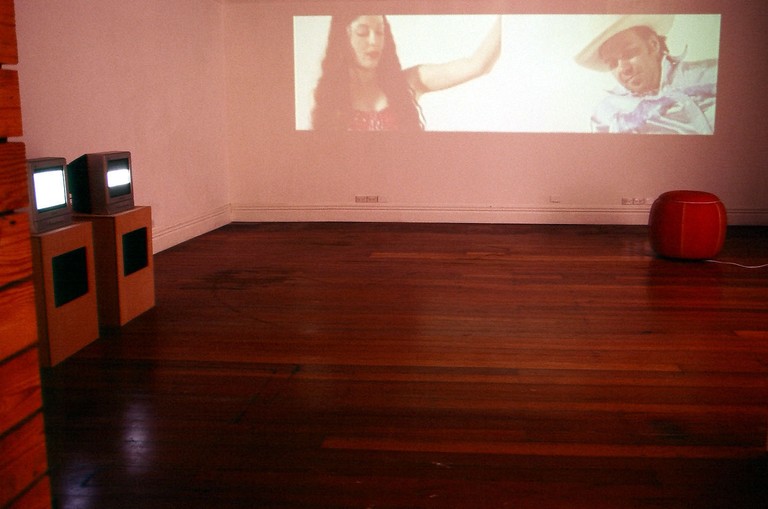