The value of A working week

September 2018 marked the ten-year anniversary of not only the Global Financial Crisis but also the invention of Bitcoin, the world’s first cryptocurrency. These two watershed moments in the history of money marked the end of the old world financial order and the beginning of the new.1 As the architecture of society shifts under global reform and commerce lurches forward once again, this decade anniversary is a reminder that at the core of our existence in this world is a collective belief in value.

While value is a concept that has allowed money to function as the connective tissue of civilisation for thousands of years, what it ultimately defines is trust; trust that our community or society believes that money is worth something to all of us and with it we will achieve personal success. However, when it comes to the small corner of the world that rejects money as the single most important representation of value, collective beliefs and ideas around value are challenged and disrupted.

In this corner resides the not-for-profit project space where commerce is seen to restrain creativity. Here, trust does not facilitate a zero-sum game; it supports the exchange of discourse and development. The value of engaging with a project space as an artist or audience member is criticality, innovation and experimentation—all things that cannot be gained with money or financial success.

In 2008, I entered the world as a design school graduate only months before Bitcoin was to quietly emerge from the ashes of Wall Street. Emerging into a post-crash society meant I had to adjust my expectations of value and success, as I developed my curatorial practice through voluntary artistic labour and collective activity in and around project spaces. Coming from design to project spaces in these conditions has also been influential to Enjoy curator Sophie Davis, who recently developed the series of programmes that formed A working week, a project that explored value-systems around design, writing and publishing by transforming the gallery into a rolling open studio for one month. 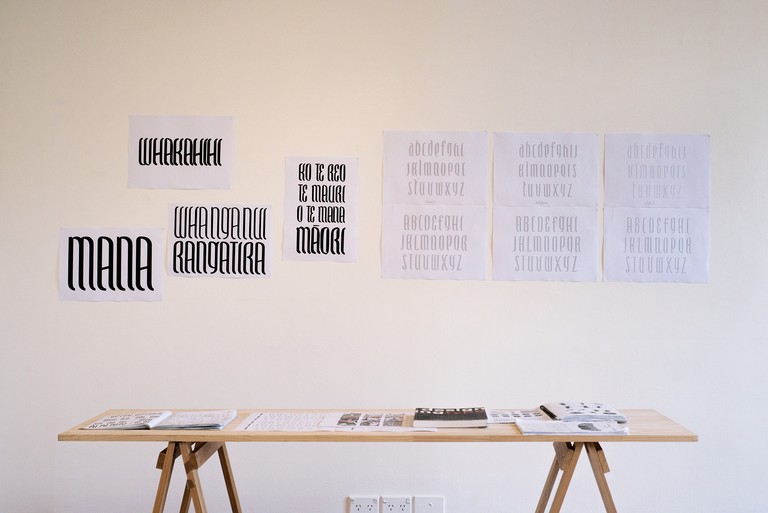 As a graduate of design school, a writer, editor and publisher, Davis has remained connected to these activities as they inform her in thinking about how project spaces are microcosmic sites of development, testing, togetherness and conversation.2 Gestures toward this way of thinking can be seen in several of her past projects including: I digress (Enjoy, 2017), Beyond Exhausted (The Physics Room, 2016) and Community Service: A Reading Room (North, 2015), as each exhibition included undertones of design, writing or publishing. Serving as natural prologues to A working week, these projects explored a more fluid and evolving definition of value that does not produce “work” in the traditional, capitalist sense.

In these past projects, work was created and displayed as exhibitions or installations. The focus of A working week was to host and work alongside the selected residents and together generate a public programme that debated a range of socio-cultural issues that affect the labour of creative practice in today’s liberal economy. The first resident to bring their practice in dialogue with these concerns was graphic designer Johnson Witehira.

As the creator of Whakarare, Aotearoa’s first typeface informed by Māori design principles rather than Māori aesthetics, Witehira used his week to invite critique and discussion around typography as a pillar of colonialism. While the written word may seem ubiquitous and almost invisible tool for communication in today’s globalised society, Witehira’s work on Whakarare highlights the way in which written Te Reo Māori is a construct derived from the Roman alphabet, because it is an oral language. Thus the first iteration of Whakarare only featured the 10 consonants and 5 vowels that make up Te Pū Taka Māori.

During an open studio event, Witehira invited acclaimed local typographer Kris Sowersby to join him in a discussion about Whakarare. As the designer of National, Sowesby is known for his work in connecting typography to ideas around nationhood. Sowesby is also known for his frank approach to discussing design, so the conversation resembled more of a “crit session”—a term that would have been familiar to the design students who made up a majority of the audience.

Type Talks formed Witehira’s final event and became a bridging moment for the next residency to begin, organised by the Asian Aotearoa Writers’ Occupation. The first type talk by Witehira looked at the history of Māori engagement with typography. The second was a hands-on printing demonstration by poet Ya-Wen Ho from Victoria University’s Wai-te-ata Press, who has previously worked with Witehira to produced 3D-printed letterpress blocks for Whakarare. Using an Adana portable press, Ho invited audience members to print samples from her personal collection of metal type. 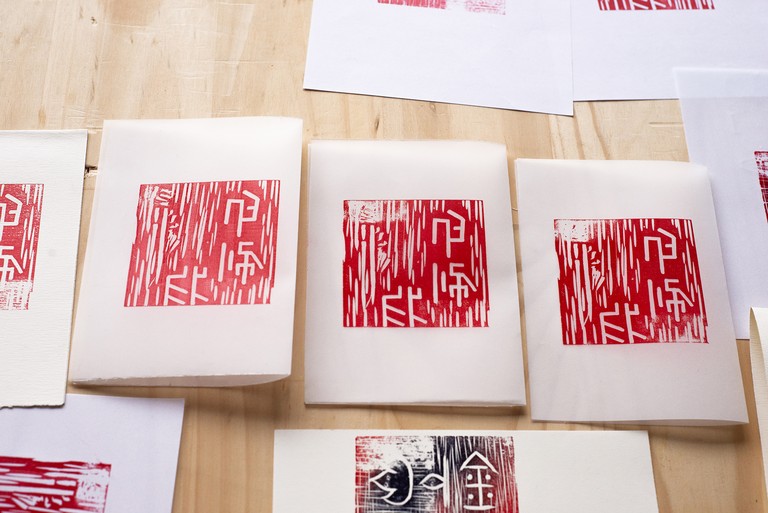 Alongside Ho, Massey design graduate HsinYi Michelle Huang and writer-curator Amy Weng formed part of the Asian Aotearoa Writers’ Occupation, a title that served more as a masthead for the week’s activities, rather than a group name. The occupation coincided with the Asian Aotearoa Arts Hui and the framework for it was developed by Kerry Ann Lee and Weng. It began with a closed discussion with Weng, Gregory Kan, Branavan Ghanalingam, Dilohana Lekamge, Sharon Lam, Rose Lu and others around how to approach the week and how to use the space. As the week progressed, the Occupation organised three public events: a Chinese letterpress discussion with Ho, Remembered Places—a writing workshop with Sharon Lam and Rose Lu, and a lunchtime poetry reading with Ho, Alison Wong and Vanessa Crofskey, introduced by Weng.

While the public events were more focussed on exploring Ho and Huang’s approach to poetry and design through the limitations and procedures of letterpress composition, the private events examined the idea of occupation and what it might mean for Asian diasporic voices to be leading discussions around writing.3 The English word occupation has several meanings, as it can mean a person’s usual work or business that allows them to make a living. It can also mean an activity in which a person is engaged in, or it can define the seizure of a place, especially as a means of protest. For A working week, the Occupation created a nuanced, radical network of discussions that sought to subtly shift the institutional pressures placed on writers of colour.4

These parameters were critiqued and expanded throughout the occupation, even when an event had a very practical framework such as letterpress or collaborative drawing. Discursivity was consciously built in, which unintentionally lead to a sense of togetherness among Wellington’s network of Asian New Zealand creative practitioners. To self-organise and create a feeling of community with only one week available demonstrates how occupation-style movements, like project spaces, are similarly driven by a different set of values and collective beliefs. 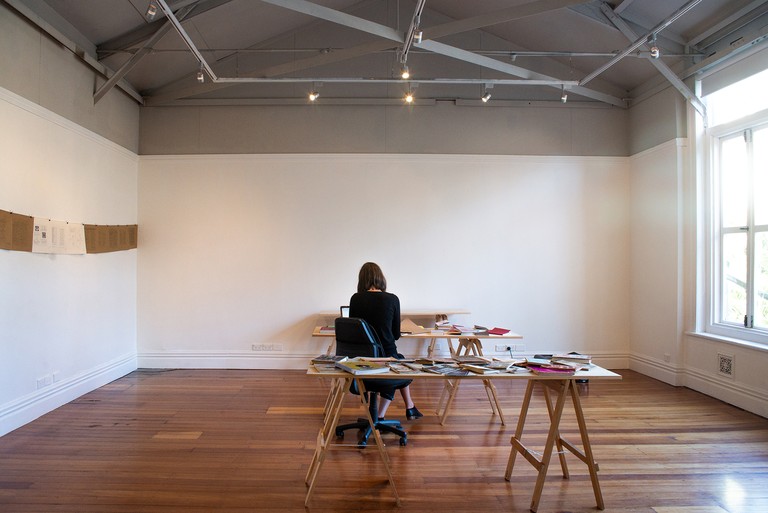 Concluding resident and graphic designer Katie Kerr approached her week at Enjoy in a similar way to the Occupation and Witehira, by infusing conversation into practice in order to see where things lead. Unlike the previous residencies, however, Kerr decided to only run one public event in order to create an unusually quiet design studio space, closed off from the constant phone calls, emails, meetings, chatter, music and distractions that come with running a commercial design practice.

Kerr forms one half of self-publishing collective GLORIA. Through this platform, she is able to facilitate projects that aren't solely content driven, allowing visual research to lead the design process. Her current project, titled Dirt, is an experimental cookbook made in collaboration with new recipes by a plant-based chef. The publication design responds to New Zealand’s kitschy cookbook history, and Kerr was able to loan a small sample of books and recipe pamphlets from a historical collection of 700 books held by anthropologist David Veart.

The selection of artefacts were on display throughout the week, as was Kerr’s design process. For her, process is a vital feature of the graphic designsphere that is too often hidden. Top tier professional organisations such as Semi Permanent and the Best Design Awards that prioritise and aspire to present the sleek final “product” and do little to celebrate design labour, thus concealing the depth of process.

On the final day of her residency, Kerr led an open discussion with local design legend Sarah Maxey. In the past, Maxey has given incredibly candid seminars and interviews that have reassuringly illustrated how messy and difficult the creative process can be. Kerr has also been involved in Designers Speak (Up), organised by Catherine Griffiths, a nationwide protest among design professionals that has drawn attention to the shocking lack of women awarded the highest honours at New Zealand’s BEST Design Awards. Kerr and Maxey discussed the fact that only 3 out of 43 award pins have gone to female designers in twenty years.

This discussion about the omission of so many women within New Zealand’s mainstream design history, combined with the call to bring depth of process back into the slick portfolio awards submissions, reveals a correlation between women and alternative practice. Perhaps performing feminism in design is about being unafraid to make mistakes, show vulnerability, resist financial success and embrace imperfection in order to be truthful to the practice.

To work within a community of practitioners that value non-commercial collectivity over individual financial success means the status quo can be broken down and rebuilt. In this space, Witehira challenges inherent colonial constructs in typography by experimenting with the distribution of Whakarare. He is leading the way by thinking about how tikanga Māori can be embedded within Whakarare’s terms of use.

This space also supports Asian New Zealand writers to meet and explore new ways to contextualise their positions within the national dialogue that doesn’t fall inline with mainstream Eurocentric ideas of diversity. To create a framework of practice foregrounding the materiality of poetry and language through letterpress is an example of how the Writers’ Occupation managed to further strengthen their community within one working week.

Each residency inherently counteracted white, Eurocentric, male dominated narratives within New Zealand’s creative sector and began to develop a series of alternative narratives through workshops, talks, crit sessions and open studios. To conclude on a thought that Ya-Wen Ho sent in when I asked the participants to reflect on how their working weeks went, creative work in the economical sense can feel precarious.5

While we cannot avoid money in our everyday lives, it is important to remember that there is nothing inherently valuable about a dollar bill, a coin in your pocket or a bar of gold.6 Money only exists because we as a society have decided to use it to represent value and with that collective belief comes risk, crashes, and losses. What this project highlights is that alternative concepts of value, stability, gains and rises are only a conversation away.