A sequence of moving images, a motion picture, a movie; we tend to relate these media forms as parts of a whole entity. Parts that when strung together provide us with a message, perhaps one with meaning to us, or a story which we escape into, leaving our present time far behind. Peter Wareing’s Stuggorings and Fijetterings exemplifies the opposite of what we expect when confronted with the moving image. It provides the audience with a surreal take on communication. What is it that we need to effectively communicate with another species, or with our own? Why do the social norms of walking a specific way, talking in a coherent manner, or conforming to the world around you lead to being accepted in society without question, while the slightest error in the human façade raises questions and concerns? Stuggorings and Fijetterings through editing, juxtaposition, and creative freedom shows us how disrupting the ordinariness and homogenizing use of public spaces can cause the viewer to question the way he/she communicates and articulates with the species around them.

When first approaching the installation we are met with a fourteen-minute clip of Pier Pasolini’s film Uccellacci e Uccellini or The Hawks and the Sparrows (1966). The clip has been edited by Wareing to have no dialogue; only the first and last vowel and consonant of any sentence are included, producing phonetic staccato utterances. The scenes that have no dialogue in the original film have been edited so that they are completely blacked out, only the soundtrack gives clues to the viewer that they are still within the world of the film. We are thrown into the deep end of the plot. There are no opening shots that set up the location, or introduce the characters. We are positioned to focus on the communicative efforts of two Franciscan friars to the hawks and the sparrows. In parallel the other film offers artist Eugene Kreisler roaming the streets of New Plymouth committing improvised actions in public spaces. The fragmentation of both films stops the viewer from gathering a coherent understanding of what is going on. Even though they defy the basic establishing shots, character introduction and rational understanding that everyday films have, this is the beautiful thing about the work. How do we ever really know what is going on in another’s life, may it be one of our own kind, or another species altogether? There is secrecy about everyone’s actions that is only truly known to the individuals themselves, no matter how much we search for interpretation or analyse a situation. Spending time with Stuggorings and Fijetterings brings this to the forefront of our mind. The randomness and spontaneity that is prevalent here through the individuality of the characters in the films mirrors the unexpectedness of encounters we have throughout daily life. 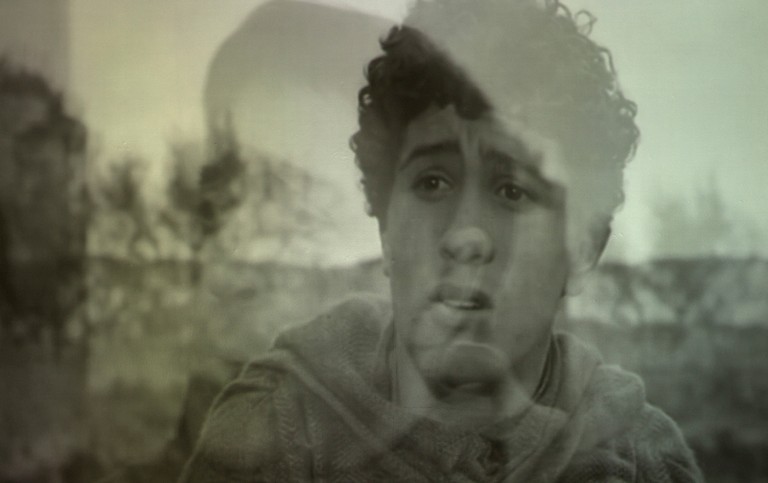 “Art for art’s sake” (translated from “L’art pour L’art”) is a term accredited to Theophile Gautier that came to mind during my first viewing of this installation. The way in which Stuggorings and Fijetterings is edited is a prime example. When we look back to Pier Pasolini’s history as a director the majority of his films had a specific message to portray. He used film as a platform for presenting his liberal political views. Wareing’s treatment of The Hawks and the Sparrows strips away ulterior meaning from the film, thus focusing on disruption and the way this changes our interpretation of this exhibition. It makes something new of something old, changing a piece from history to create an entirely different form of art. At certain stages in the film I found myself focusing on the graininess of the black and white images. The clips are projected onto grey squares specifically painted on the wall of the gallery to bring out the tones of the film. In other scenes the footage goes very black and you can hardly depict the characters; they are mere shadows moving under a layer of darkness. As we cannot seem to understand these scenes, by forbidding the viewer to clearly see them exemplifies how the exhibition resonates with “art for art’s sake”—art that is devoid of any moral or didactic function.

At other points in the film the focus changes to the subtitles translated from the friars’ attempt to communicate with the birds. Religion, God and love are mentioned in fleeting conversations between these two species. Such sincere topics will strike different chords in each viewer. Some will dwell on these and derive meaning from them that relate to the entirety of both clips. Others will acknowledge them, but not take them to heart. The disorderly manner caused by only the first and last vowel and consonant being heard cue the viewer to dig deeper into their understanding of the piece. From this disruption of coherency we focus more on what we hear and see, instead of having it all laid in front of us in grammatically correct sentences. There is no way of “reading” or experiencing this piece from beginning to end. Hence why it brings to mind “art for art’s sake” as there is no clarity of meaning directed from the artist. It is up to the viewer’s intrinsic notions to get out of it what they will, be that a specific message or meaning, or just the mere appreciation of artistic freedom. 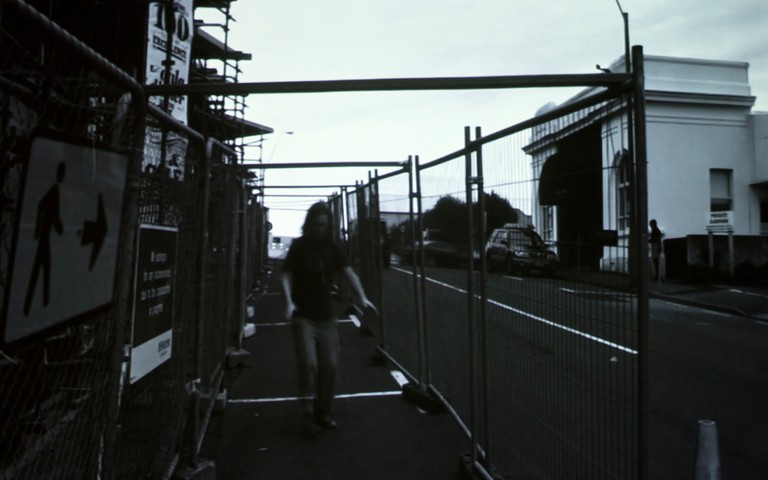 I was mostly interested in the clip from “Uccellacci e Uccellini” because I see it as leading the other. While both clips are described as “fleeting vestiges of whole coherent actions”1 I feel that the clip filmed in New Plymouth supports and even emphasises the editing process of the former. Kreisler’s random actions again bring a disruptive presence into what would normally be a rather placid scene. Many of the shots are in public spaces in New Plymouth: a footpath, a parking lot, and a construction site. Only for a few moments do we see other people walking through the shots, and a few cars and cyclists pass by. The nonchalant way that these people react to Kreisler’s actions made me wonder: what does it really take to spark up some form of communication with the unordinary? Do we shy away from the unknown, or the unexplainable? In a sense it supports the communicative attempts of the friars to the birds. The birds are only concerned with basic survival and mention the need of millet and seeds during winter. While these strangers pass by Kreisler, it leaves me thinking that we as people are more like the birds- going about everyday duties, jobs and errands, in a robotic way. Just as the birds are foraging for food and building their nests they take no heed to what the friars say and their attempt to communicate with them is somewhat lost. Thus, Kreisler’s attempt to communicate with the passerby is lost just as the friars’ is to the birds.

When Peter Wareing comments on his process he states that, “in producing moving image work of varying durations and format, using the long take, as well as the montage as a strategy aiming to interrogate my own complex motives for continuing the difficult work of aesthetics, alongside the larger struggle for social change, I sometimes stress my own presence in the videos as a vehicle for investigating subjective relations to power and place, often inserting personal scenes with doco footage.”2 In Stuggorings and Fijetterings the artist’s presence is felt through the connection Kreisler has with the camera. There are scenes in both clips where the characters stare into the camera for a prolonged length of time. Before there was an audience to receive these scenes the artist himself was on the other side of the camera. Therefore, as Wareing mentions, his own presence is important to him; we can feel the connection to the artist in the clip in New Plymouth through the long takes, and the intimacy Kreisler has with the camera. As well, Pasolini was highly involved in the making of his films, right down to the casting, stating, “I choose actors for what they are and not for what they pretend to be.”3 When you watch both films you get a sense that these actors are acting autonomously instead of being strictly molded into the performance. They are art within themselves, components acting as parts of a larger form of art in this exhibition. By editing Pasolini’s original film Wareing makes it his own, yet does justice to Pasolini as an artist himself. His editing accentuates styles that Pasolini used originally: what he called pasticchio or the jumbling together of wide range of aural and visual materials, as well as a tactic he coined stylistic contamination, both prevalent in the original Uccellacci e Uccellini.4 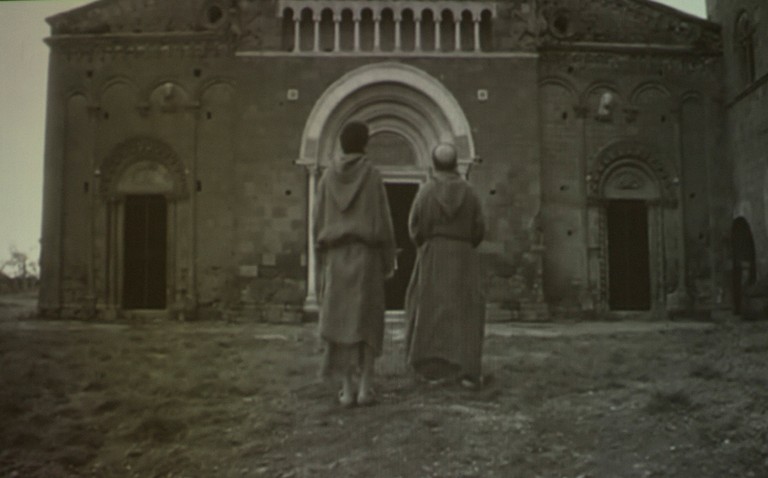 The juxtaposition of the two works, the old made new by way of editing The Hawks and the Sparrows, and the footage filmed by Peter Wareing gives the viewer much to think about, but concludes upon the notion that inevitably art is always made for the artist’s own pursuit of justification. We as an audience and members of a society that finds a need to critique everyday life should take a step back and appreciate Stuggorings and Fijetterings for its aesthetic value. 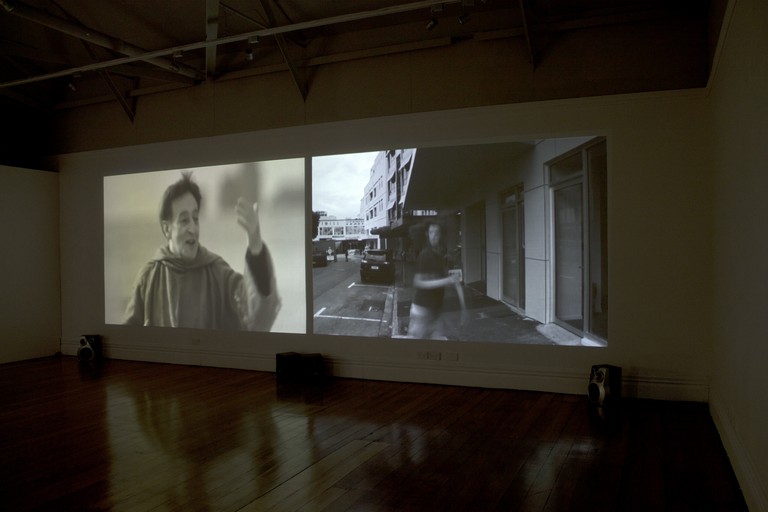