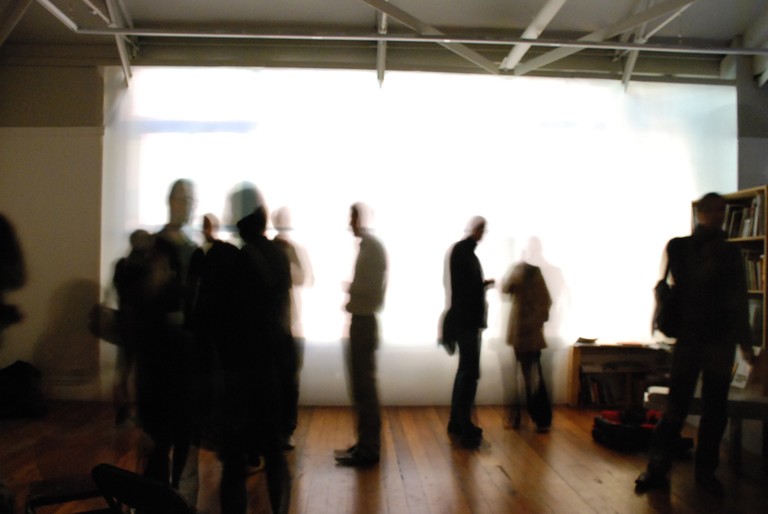 Amid the witty banter of a breakfast radio programme an announcement for an exhibition is read. Obviously spoon-fed from a press release, it reads like a list of magniloquent words: “... nuance ... traversal ... critical materiality ... catalytic interaction ... pluralistic ... concurrent ... sensory perception ... singularity ... elucidating ... symbiotic interaction.” Ending the announcement the radio presenter sarcastically asks, “If anyone can explain what this means please give us a call.”1

The exhibition in question was gains on losses by artist John Ward Knox. The exhibition consisted of six distinct but interrelating components sited within, and on the thresholds of Enjoy Public Art Gallery. These components included an expansive paper screen, a performative wall drawing, two images pinned to the gallery’s notice board, a map,2 and an appropriated photograph used for promotional purposes. Despite their inherent simplicity, the symbolic relationships that these individual works formed posed complex existential questions for the viewer to contemplate. The integral aspect that allowed these various components to instigate such poetic meaning was their strategic intervention into the physical and ideological context of Enjoy. This aspect was most apparent in the paper screen.

The screen completely obscured the gallery’s most dominant architectural feature—a large window that overlooks a well-used car park and the bustling pedestrian traffic of Cuba Street. This work acted as a definitive anchor for the entire exhibition, both due to its scale and the ambient effects that it had on the existing space. The screen was meticulously constructed out of numerous sheets of AO size drafting paper adhered with clear tape so that it intervened seamlessly into the existing architecture. So considered was the installation and mastery of material that the paper seemed to effortlessly mold around tricky aspects of the interior, including pipes and protruding window latches. This careful construction both enhanced the paper’s ephemerality and revealed its inherent properties to diffuse light. In fact, the screen provided the only means of available light3 and therefore controlled how the gallery space was visually defined.

The soft ambient sunlight that emanated from the screen revealed that the intention was not to totally block out the world per se, but rather to limit its visual impact through means of reduction. This reduc- tion from window-view to ambient light worked to create a liminal experience of architectural space, and one’s own murky bodily presence within it. It also encouraged contemplation that went beyond the haptic and visceral experience, triggering a renewed awareness of the visual illusion—as opposed to our scientific understanding—that we are physically static in relation to the heavenly bodies that appear to fly across the sky. This quality, I am told, was important to the opening evening’s artist talk, where Knox performed the wall drawing at sunset—therefore making apparent a connection to the arc of his arm span and the elliptical trajectory of the sun. 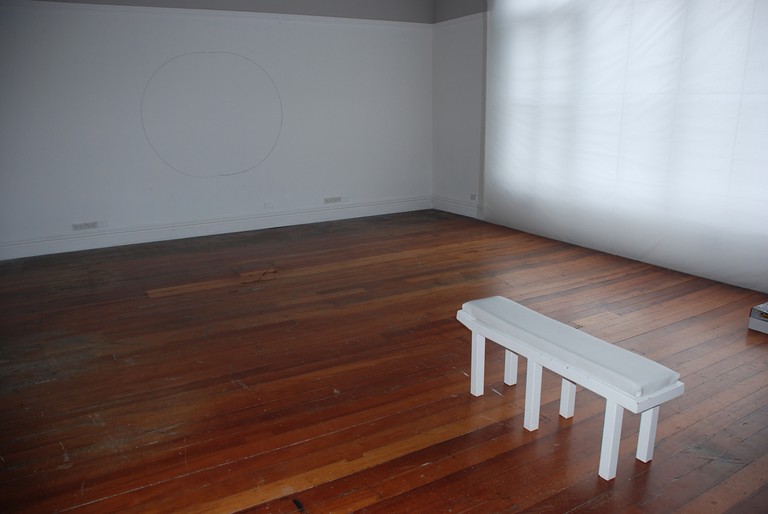 It is equally apparent though, that the screen significantly separated the gallery from the view of the street and also acted as an attempt to purify the gallery space by temporarily erasing the room’s strongest visual element—the window frame.This gesture could be understood as the artist’s desire to aesthetically separate his own artwork from the complexity of the city and its given architecture; to create a hermetic environ for his post-minimal and appropriated conceptual aesthetic to reign supreme. However, to take this essentialist view would disallow not only the subtle cognitive beauty and philosophical musings the work so strongly enacts, but also its capacity for institutional critique. For the simple but technically adept gesture of the screen has strong aesthetic and conceptual similarity to artists of the late 1960s who scru- tinised the assumed neutrality of the gallery space.4 Indeed, the critique that the screen invites could be summed up in an afternoon’s reading of Brian O’Doherty’s book Inside the White Cube.5 O’Doherty’s de- mystification of modernist modes of display and the inherent power signifiers that are entrapped within the aesthetics of such conventions (especially the rationale behind white walls and controlled lighting) is clearly of influence in Knox’s critical gesture. The screen could also be understood as a parody of Enjoy being a ‘Public Art Gallery’. If we were to use the neo-liberal political assumption that the public is quantifiable and homogeneous, then Enjoy could be revealed as not serving ‘the public’ but a small niche community. Considered in this capacity, the screen could be understood as a blindfold or curtain that essentially separates Enjoy from the public realm - making apparent that the gallery caters to a small clandestine social group and not ‘the public’.6

The cognitive experience and the associated philosophical musings, in conjunction with a critique of the institutional context that an artwork is exhibited, resonate throughout the other components in the exhibition. For instance, the two folded pictures of galaxies pinned to Enjoy’s notice board suggest in a secretive action the boundaries of the gallery’s ideological context, as well as alluding to multi-dimen- sional universe theories. The performative wall drawing defines the artist’s ‘mark’ both in terms of the parameters of his physical existence and the role of authorship in the gallery context.7 The appropriated promotional image of two prisoners playing chequers on a modified board suspended between two jail cells suggests that simple ad hoc interventions have significant power in edifying one’s being but also in virally deifying institutional power.8 There are many other avenues of critical discussion surrounding this exhibition. However, it remains apparent that the humble but decisive intervention into the physical and ideological context of Enjoy is integral to the exhibition’s meaning. It is interesting to consider, therefore, in an exhibition that is based upon these tenets of reductive simplicity and awareness of context, that the press release was written in such a blatantly overcomplicated way. One would assume that the artist or Enjoy would understand the need to not talk up the importance of the exhibition with ostentatious words but would instead use the convention of the press release in a way to entice curiosity—like how Knox’s artworks elicit manifold meaning though simple means.

The loss of communication evident in the radio announcement illustrates a clichéd division between contemporary art and the ‘general public’—a division due to conflicting interests at play in different cultural contexts. On the one hand, the radio announcer, in his annoyed tone, assumes a position that this press release does not communicate to his station’s target audience. On the other hand, the overtly grandiose language used to describe Knox’s exhibition in the press release was intended (I assume) not to confuse or mislead this audience but with best intentions to serve the artist, and to give him and his art due recognition for the complex meanings that the exhibition alludes to. Inherent in this intent is a pursuit to gain symbolic status within the contemporary art community who also share the value placed on such language. The problem being is that, while satisfying these perceived needs, this form of commu- nication sets up linguistic barriers to those who do not share the same values. It can not even be assumed that the writing requires a certain level of education to understand it since the terms used and the manner in which they have been semantically structured makes it difficult to be transferred into other disciplines. For example, subjective phrases such as “critical materiality” are conjured with specific meanings within contemporary art that would not make sense to a physicist. The challenge is to promote exhibitions in a way that communicates clearly and intriguingly without succumbing to the creatively anaesthetised language of event culture—a fate to which most large art institutions are currently resigned.

The exhibition’s title, gains on losses, proposes that there are advantages to be gained from contemplating simple reductive gestures. The radio announcer’s bewilderment is evident of a lost opportunity for public engagement. What then can artists and small art institutions gain from such a loss? Perhaps the answer to this question could be found in the curious strength of Knox’s ability to elicit the complex out of humble materials and simple actions.