Grounded by the Senses

In our culture the predominance of the look over smell, taste, touch and hearing has bought about the impoverishment of bodily relations. 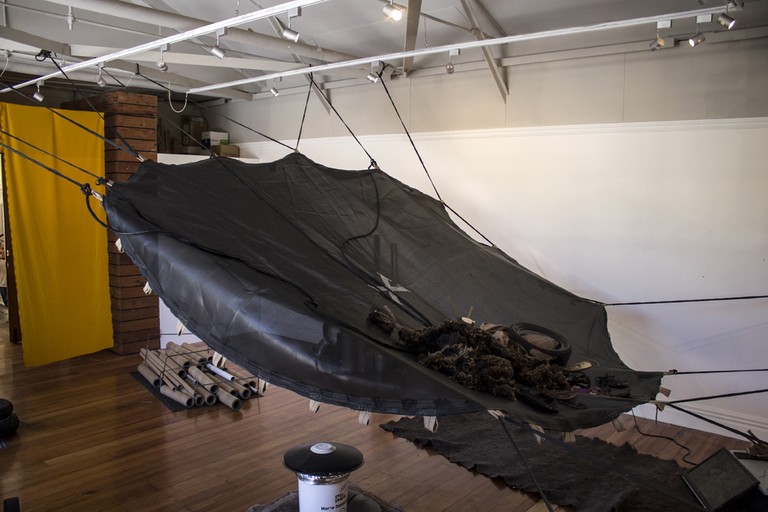 For many of us our everyday encounters include the familiar smell of coffee being brewed in the morning, the scratchy soft feeling of the towel as you dry yourself, and the change in your posture as you put your bag on your back to leave the house. These daily occurrences are interspersed with stranger sensory experiences, the recollection of times past as you smell the bergamot perfume of a passerby, or the reminder to ring a plumber triggered by a cold droplet of rain on your skin. Many of these feelings are taken for granted or at least viewed as insignificant. This is partly due to the legacy of western philosophy and culture that has privileged the visual over all other senses. For example Plato believed that vision was humanity’s greatest gift and Aristotle thought of sight as the noblest of the senses. More recent philosophers and artists have questioned this privilege including Luce Irigaray quoted above. However, the gallery often still becomes a place to look and be looked at. Gleaners’ Garden by Xin Cheng and Kirsten Dryburgh offered a rare opportunity to sense and utilize natural materials in a gallery context.

At the door of the space you were immediately required to push aside a warm yellow curtain to enter. As you peered in, a number of familiar objects made themselves known: buckets of local herbs and plants, a felt rug on the floor, glass vases, cardboard tubes, and a giant black trampoline suspended from the ceiling. At first glance it looked like someone was in the middle of something. There was an air of the unfinished and untidied, like someone had to leave the house in a hurry. I say house because Cheng and Dryburgh gave the gallery the comfortable domesticity of the corner around the side of the shed, the makeshift camp created in the field at the end of the garden, and the kitchen with its jars, liquids and processes. At once I wanted to explore. 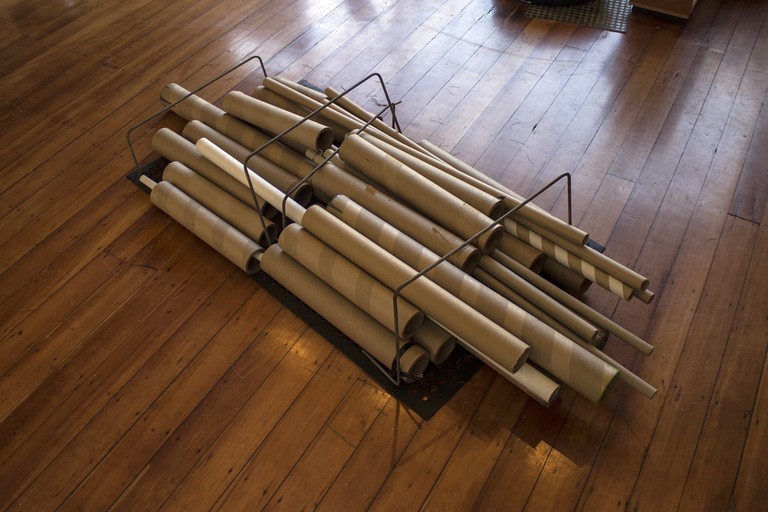 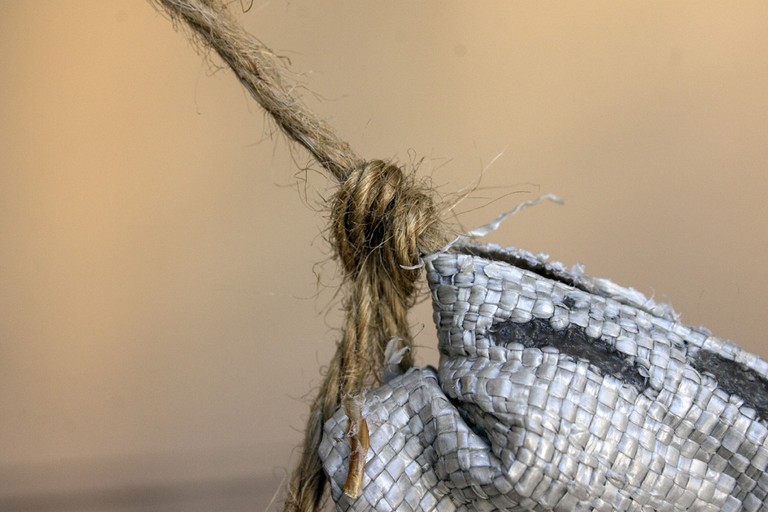 After pushing aside the curtain the first thing that hit me was the warm aroma of plants and herbs. On the occasion I visited the gallery the scent of pine and eucalyptus immediately reminded me of the forest floor. My eyes were drawn to buckets of branches, jugs of watery plant infusions on the windowsill, as well as the steam emanating from the boiler making herbal concoctions with selected local plants. The boiler was created with a glass lampshade and various bits and pieces sourced from the local refuse centre. Both Cheng and Dryburgh are united by an interest in botany and the idea of plants as both tools and as sensory experience is a strong theme in the work. The use of local plants also represents the artists’ interests in utilising indigenous knowledge and homeopathic practices.

The boiler was positioned in the middle of the gallery floor next to a large felt rug under the black trampoline base held in place by strips of old tyre. As I negotiated the space under the trampoline I had to bend over in order not to hit my head and was prompted to sit cross-legged on the rug. Feeling the hand-made fabric and playing with the scattered leaves around me, I felt secure and child-like, sensing the objects around me more acutely than normal. Cheng and Dryburgh were inspired by Architect Bernard Rudofsky’s ideas that the floor should be a sensuous space incorporating “the tactile freshness of nature”2 and that spirit is certainly reproduced in Gleaners’ Garden. More than Rudofsky though, the installation prompted action whether picking up the home-made felting tools, trying on the sandals made of tyres or playing with the cardboard tubes and sound instruments.

Gleaners’ Garden also incited movement in other ways. The gallery was activated by a tarpaulin suspended by an open door that blew in the wind, wind being a common occurrence in Wellington. This openness to the outside, also symbolized by the sourcing of the local materials used for the installation, routed the space in its context and helped to create some of its homeliness. Both Cheng and Dryburgh were also keen to include the local community in their collaboration and pass on the knowledge acquired in their residency. A small journal with notes on plants, sourcing local materials, good eateries and recipes accompanied the exhibition.

The temporal dimension of materials and practices was also a theme that united the work of the two artists. Throughout the run of the exhibition the leaves and branches started to dry out and collect on the gallery floor; the collection of plant infusions on the windowsill started to change colour and grow mould; the cardboard tubes and felting tools moved position through use. The labour involved in creating the installation was also evident, for example the felting tools and rug made me think about the time-consuming process of creating fabric pre-industrialisation. Offcuts of tyre and other pieces of rubber were strewn around the gallery leaving traces of the exhibition’s production. Holes in the walls marked the trials of hanging the trampoline. Gleaners’ Garden spoke of the lifecycle of materials; their creation, decay and reuse. As such, the installation created a familiar everyday atmosphere, but an everyday that was outside the spectacle of much of contemporary culture. Cheng and Dryburg produced valuable social and bodily sensations beyond commodified experience and offered the opportunity for us to rethink our relationship with the material world. Even if only existing in our imaginations, these provocations are valuable in a global context that is increasingly socially, politically and environmentally unstable. Being grounded by sensory experience gives us the potential to reflect upon our connections with the people, animal, plants and materials with whom we co-exist. 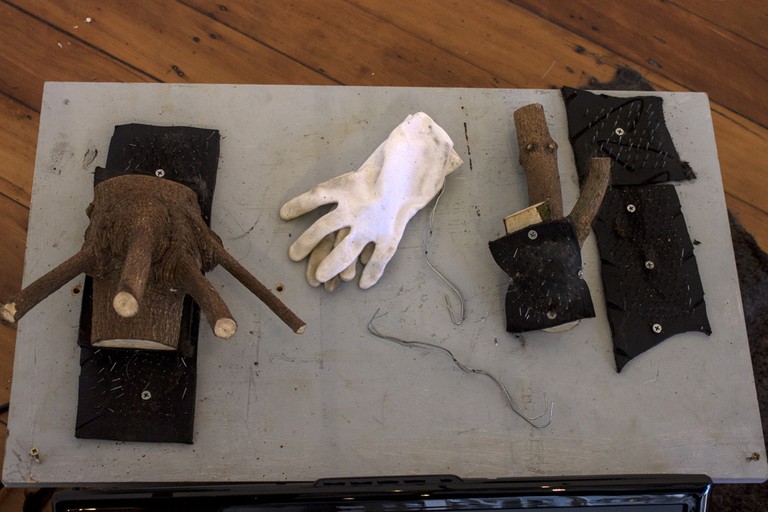 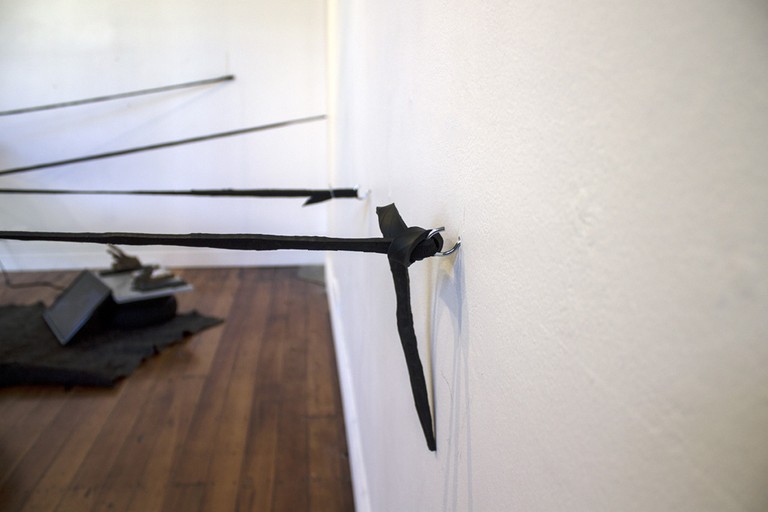