Harboured by the Harbour: An inn for tired travellers 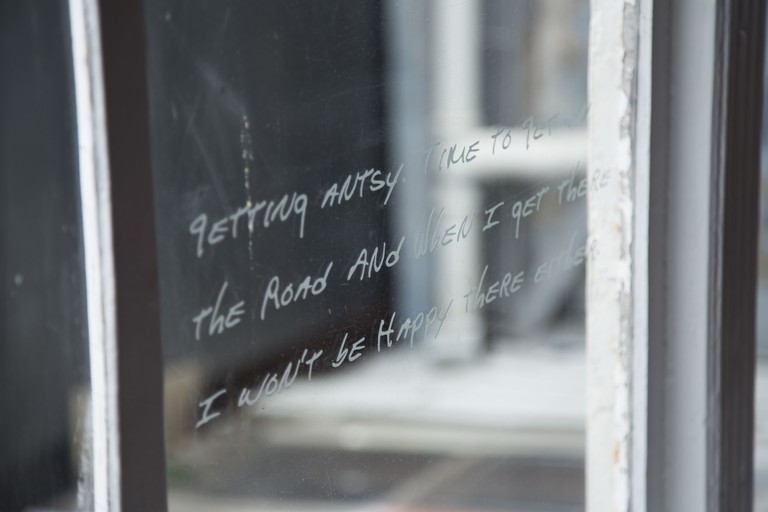 Harboured, shown at Enjoy Public Art Gallery, expresses the personal story of artist Mickey Smith and the connection she feels between her childhood hometown in Duluth, Minnesota, and her more recent settlement in Auckland, New Zealand. As a child the artist grew up spending a lot of her time at Port Duluth helping her father, a merchant marine, with his work. Upon moving to Auckland later in her adult life, Mickey connected to the Port of Auckland because it reminded her of these childhood experiences. The exhibition, shown in Wellington, is a project expressing the artist’s personal and emotional interpretation of the familiar connections between the two places.

I interpret the title, Harboured, as a both a literal statement about the central theme of the show, the shipping industry, and as a metaphorical offering of how the artist herself views migration and the process of settling in new places. Harboured speaks to ideas of settlement and re-settlement within and between places, of always being in some state of constant flux, of being pushed by appellations of wind, waves and currents that embody the everyday social experience.

Particularly memorable quotes that have been said to Smith by her father have been selected to feature inconspicuously on the gallery windows, placed in the space between the exhibition and the only view of the world outside the gallery. This strategic placement facilitates a conversation of place, between Port Duluth, the Port of Auckland and the place of the exhibition, Wellington. This exhibition in its entirety visualizes connections and points of similarity that the artist has found comforting, between her space of familiarity, Port Duluth, and a new yet still seemingly familiar place, the port of Auckland.

Getting antsy. Time to get on
the road. And when I get there
I won't be happy there either.

This particular quote, one of the phrases said by the artist’s father, specifically speaks to the notion of being harboured within a space. The definition of a harbour can be explained as the space between the open ocean and land or by further explanation as “any place of shelter or refuge: the old inn was a harbour for tired travellers”. Defining harbour as a place of refuge deepens the understanding of the exhibition title as more then just a representation of the commonalities between the shipping ports by speaking to the idea of finding familiarity in a new place as a form of refuge. This definition alludes to how the artist may understand settlement in a place as being in search of refuge or shelter, but never to permanently settle. The artist’s decision to include the line “And when I get there I won’t be happy there either” suggests an unanchored approach, an understanding of settlement and migration as always in a state of negotiation.

I'm between a rock
and a hard plate.

There is a feeling of unease between these two phases of place, the rock and the plate. In the artist's current situation the rock may be interpreted as Duluth, and the plate as Auckland. Through recognizing the shipping industry as interlinked with deeply personal and emotional experiences, the artist has found a way to creatively examine both ports as intrinsic connectors between the familiar and unfamiliar. Having recently migrated to Auckland New Zealand, a completely new place, I believe Smith has used the ports as a point of familiarity to creatively responding to, using these connections to harbour herself from the experience of being a “tired traveller”. To further add to the idea of the exhibition embodying the harbour as a space of protection, it is key to note that this exhibition was shown in Wellington city, a space separate from the ports of Duluth or Auckland. In this respect Wellington and Enjoy Gallery represent a harboured space for the artist to initially “test the waters” for what she describes as a deeply personal show of “tightly wound emotions and memories”.

Between the references to place, her father’s quotes also depict moments of confidence or triumph towards overcoming a challenge. The quote above alludes to this sense of confidence, embodying snow as a metaphor for challenge. In this case, the challenge for the artist is finding a sense of familiarity within the unfamiliar. The confidence that it takes to embrace migration as an adventure, a gift full of opportunity, requires a positive perspective. 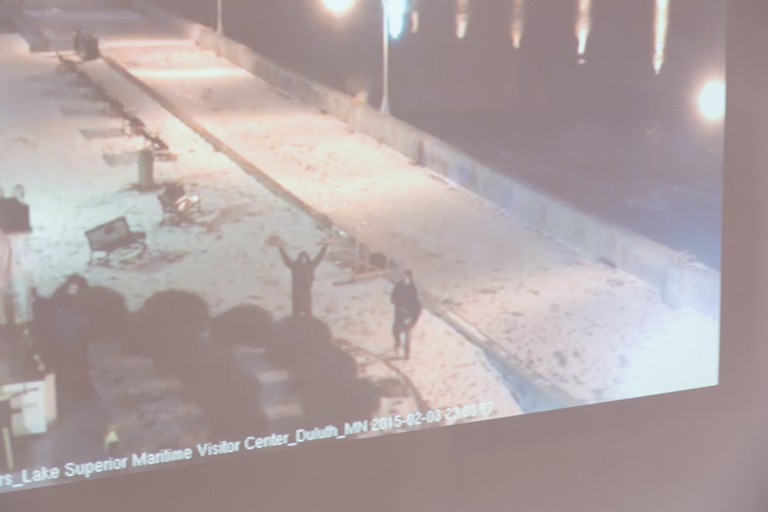 In this exhibition Smith and curator Emma Ng address perspective through the strategic hanging of Smith’s detailed photographs of sailing knots, which have been up scaled and printed on delicate silk sheets. The silk prints have been hung from the ceiling of the gallery intermittently behind one another, allowing the eye to either focus on the foreground of the first image or look through to where the subtle imagery printed on another sheet can be seen in the background. This effect gives the viewer an acute sense of layering and the shifting of perceptions within the works, giving the exhibition further depth and playing with the layering of histories and experiences that informs the perception of a new place. Perception is then presented as seeing in motion, as everything is experienced in tandem intersecting with physical, emotional and geographical contexts. The artist’s choice to photograph rope knots also acts as a visual metaphor for the process of solidifying connections. Each knot captured and hung in the exhibition gives the viewer a sense of how, in a physical sense, someone in a new place might begin finding points of familiarity, interplaying with the belief that actively finding and making connections within a new place is manifested through positive life experiences derived from positive perceptions.

The doctor said I'm in damn
good shape for the shape I'm in.

Migrants demonstrate a tendency to search for connections of familiarity that feed the soul and situate the self, establishing a position where emotions can be controlled to maintain a healthy emotional state. The quote above relates to the process of working towards a comfortable state where connections are made and there is a balance between the familiar and unfamiliar. To be in a “damn good shape for the shape I’m in” indicates that the artist who negotiates between the familiar and unfamiliar is in a composed state, successfully negotiating between Duluth and Auckland.

Directly connecting herself and the audience to her hometown in Duluth, the most important feature of the exhibition is a live video feed of a Port Duluth view. This video feed was played throughout the time that Smith was creating the works featured in the show, to keep her grounded and to serve as reminder of the differences between where she resides in Auckland and her hometown. One main difference between these two places is time, with Duluth being located in Minnesota, America and Auckland in New Zealand. Situated on opposite ends of the spectrum, in opposing hemispheres, the live video feed really highlights the contrast of time and season between the gallery’s opening hours in New Zealand and the time of day in Duluth. When the exhibition opened to the public in the morning the video feed showed the end of the day and the sun setting in Duluth. For the majority of the time the exhibition was open Duluth was showed in nighttime and with much of the wharf and surrounding buildings encased in snow. This display offers a moment of insight into the confusion of time that is often experienced by Smith since she migrated to New Zealand. The video feed further draws the audience into the realities of the migrant experience where there is often a hyper-awareness of the dualities of a home space existing in contrast to a space that is currently occupied by the migrant.

The final element to Harboured is a coiled rope tightly wound into a perfect circle placed in the center of the exhibition space. This rope is an interactive feature of the show where visitors are invited to walk over and stand on the rope as it takes on the form of a mat. This element offers a space where the personal experiences of migration can be shared with the visiting audience, brought together in the space outlined by the rope mat. From the center of the mat an individual is immersed in the direct view of the live video while being surrounded by the delicate silk prints of rope knots, the quotes just visible on the window in the distance. In this position the exhibition can be experienced as a whole, encompassing a space where the artist’s work is the most exposed. By inviting the audience to see the migrant experience from her own very personal perspective the artist puts herself and her work in a vulnerable position, especially when migration is considered a common experience in the New Zealand society. For this situation the artist and her work needs to portray a sense of confidence, embodied in the act of keeping “yer legs cross and your knockers up babe”, advice reiterated by her father at the conclusion of every phone call between them.

This exhibition is an expression of a close relationship between Smith and her father. It can be seen in this exhibition that his influence on Smith as a mentor has been greatly influential in her life and has become especially meaningful upon her settlement in Auckland, New Zealand. This exhibition identifies personal moments of connections that have led the artist to become somewhat comfortable in her New Zealand surroundings. By including personal elements such as the quotes written on the window, with the rope mat and the live video feed, the audience is presented with an insight into the internal perspective of the artist from an emotional standpoint. However the exhibition also offers a moment, particularly when standing on the rope coil watching the live video feed, for the audience to begin their own process of finding connections between their current place and Port Duluth. For some audiences Port Duluth may be familiar to them and so will bring back particular memories personal to their own experiences. Others not familiar with Port Duluth have the opportunity to reflect on time and place between what they are viewing and the place they are standing in, searching for their own points of familiarity in order to feel somewhat comfortable. As a whole, this exhibition offers insight into a deeply private space where Smith is negotiating between her hometown and her new home in Auckland. By opening up and responding to her emotions around place Smith has presented moments where the audience too can empathize but also connect with her in instants of true understanding about the process of relocation and displacement from their own backgrounds. It is comforting to see an artist expressing a creative response to migration, describing an honest experience that is somewhat understood by a large proportion of the population with New Zealand being such a multicultural migrant community. 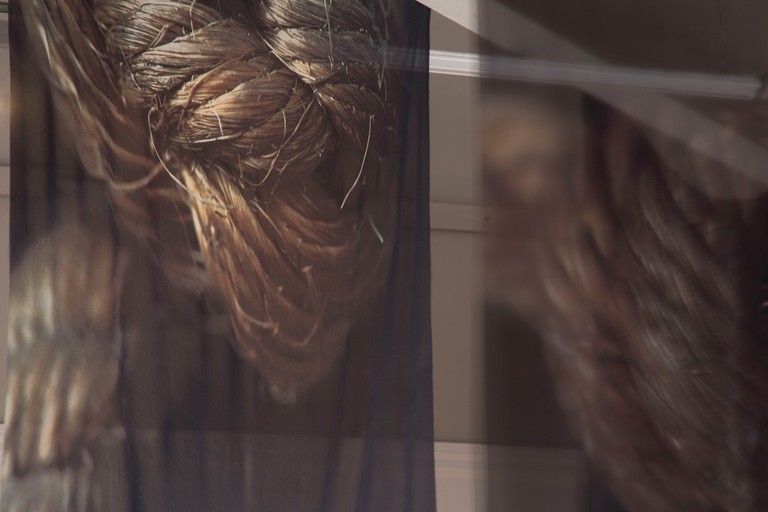