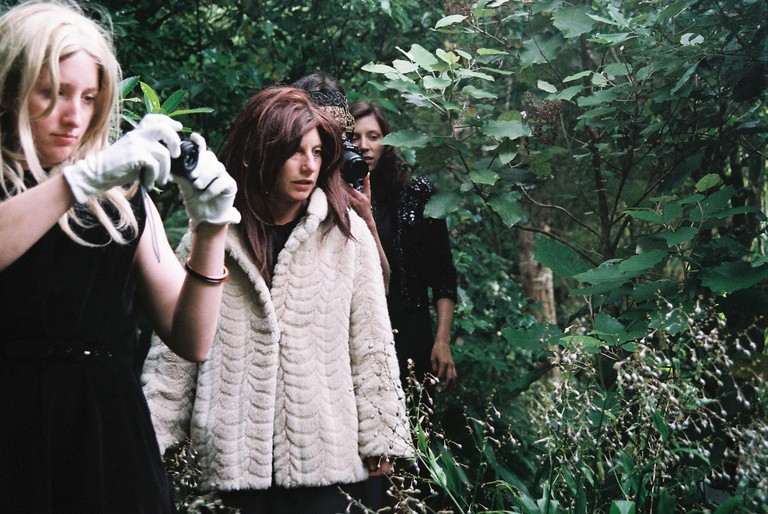 Several unusually attired women are pictured emerging from the bush. A couple are holding cameras, their lenses capturing something just outside the frame. The leader conspicuously wears a pair of white gloves that allude to the mythical crime scene she is caught in but also bring to mind the customs associated with handling art. As one of the key images for the exhibition Holloway Road: The Alleged Visitation by L.M., this photograph encapsulates the narrative Fitts & Holderness offered for the project which they located at the remote end of Aro Valley where someone had supposedly gone astray. Like many instances of criminal activity in New Zealand, as well as traditional fairytales, the misadventure was set deep in the woods. Hansel and Gretel, Little Red Riding Hood and Sleeping Beauty all met their fate in enchanted forests, and we retain in our conscience this correlation between sinister actions, the natural environment and archetypes of femininity; the undergrowth harbours dark thoughts as well as happenings. However, as those gloves suggest, this project invoked a range of ideas regarding not only crime and storytelling but also discourse around the making, viewing and framing of art. In particular, the history of photography, notions of appropriation, simulacra, illusion and reality, and the way in which images circulate in society today. Within the installation the alleged disappearance of L.M. was an overt guise. Magicians and mimes also wear white gloves and like a rabbit-in-the-hat trick, the audience was asked to suspend disbelief, allowing for ulterior narratives to bubble beneath the surface while the hunt for the potentially fictitious L.M. was performed.

Fitts & Holderness have been researching unsolved disappearances since 2001, though resolution of the mysterious absences hardly seems to be their aim. Instead they revel in the illogical and missing parts, presenting studies of inconclusive possibilities that echo the open-ended nature of contemporary art practices. For Holloway Road, Fitts & Holderness played on the trope of criminal reporting, offering documentation of a search and rescue mission through photographs, a series of projected images and audio interviews. It was a credible scenario, yet something was subtly awry: the artists merged fact and fiction, print photography and digital projection, theatrical costumes and ordinary players until it seemed nothing was certain. The deferral of meaning was both concrete and immaterial; the potential narratives slipping between and evading fixed reference points, a crucial element of the exhibition that was enforced through the process and media utilised.

Fitts & Holderness initiated the project by directing willing participants to the end of Holloway Road with a box of costumes, camera equipment, a list of instructions and notes. Rehearsals for another theatrical production were taking place in the area at the time so although the masquerade wigs and odd clothing prompted a playful approach, they also melded with the site. The artists had set up the situation and later edited the documentation for display but they left the day to unfold without their supervision, encouraging those involved to steer the project and actively contribute, thereby questioning the work’s authorship. Also, ordinary occurrences, such as a man out walking his dog, rupture the fictional plot and like Lacan’s punctum, act as momentary flashes of the real in the fragmentary remnants of the event. Through leaving the production of the works up to the participants an element of chance was incorporated into the project and an air of actual, less contrived mystery retained. 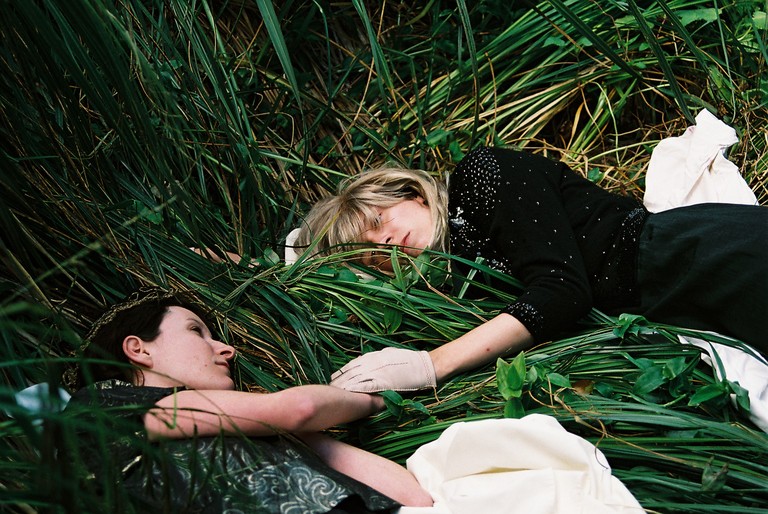 In the images taken by the participants, there is a real confusion about who is the subject, who is documenting it and what it is we are looking at. The costumes, setting and voyeuristic camera vantage all heighten the theatricality of the photographs and similarly to postmodern photographic practices, the characters elude simplistic signification processes. Items such as a blond wig, dinner dress or fur coat, turquoise smock or corporate jacket were provided to indicate a particular role, but these facades were changed over the course of the day and worn with a sense of humour, caricatures rather than fully developed personalities. This highlighted the constructed and mutable nature of personae, reflecting the fluidity of identity and representation. The aesthetic shifts between documentary and fashion photography, reality television and drama, revealing less of a discrepancy between the genres than we assume.

Selected from the documentation as well as subsequent investigations, the exhibition included photographs hung in a series along one wall, a projected slide show of ten screen tests, and three radio interviews that played from the corners of the gallery space, all based around the disappearance of the enigmatic L.M. The photographs could be read in any order and bled together to suggest various strange narratives which the screen tests implied were fictional. Contradictorily, the interviewer’s voice was recognisable from Radio New Zealand National, suggesting this might be the bizarre re-creation of a true story, further blurring the lines of truth and make-believe. Not only did the work include the performance, documentation, and audio interviews, but even the promotional text, myth and surrounding rumour contributed to this curiously amorphous project, similarly to the unclosed file that it purported to depict.

The mediation of a performance artwork through documentation is a familiar conundrum, yet Fitts & Holderness designed Holloway Road to play off existing imagery, cultural references, individual and collective imaginaries; reflecting and relating to the glut of images that inundate our lives as well as representing a specific event. Constantly bombarded with representations, we no longer encounter images individually. They operate in succession as part of our orgiastic visual culture and as photographer and art historian Jeff Wall has claimed, no image or photograph exists without a trace of the film still. The photographs in the exhibition are clearly reminiscent of cinematic shots, though they lack the sort of defined narrative that would locate them as sequential moments of a story, and ambiguous circumstances and uncertain consequences surround the scenarios. In contrast, filmmaker David Lynch has said he often starts with an image and bends the script to include it, enabling particular motifs or visual cues to be the central concern rather than a linear narrative, and it appears a similar technique is at work here, as though the events were edited according to a flexible and arbitrary plot.

Exhibiting both photographic images and projected screen tests brings into play the distance between the media of photography and cinema, historically and conceptually. The development of photography has been granted many roles: as a component of modernism; the end of painting; and the beginning of cinema. During the early stages of its development and in comparison to painting photography was assumed to present a truth, a captured reality. In the 1930s Walter Benjamin argued that it offered a kind of ‘optical unconscious’, providing more information than the human eye could ever grasp in a glimpse. Now we understand that it offers less. Plucked from context, framed, cropped and without a durational element, a photograph is always partial. As a reproducible medium, Benjamin discussed how most photography would dispel the aura of originality, the cult value of a work fading through repetition and familiarity. Since his time, artists and theorists have elaborated that there is only reproduction, simulacra that exist without originals.

There may be no reality behind each image, yet these photographs seem to capture an aura of a different kind - the ghostly presence of absence. Holloway Road can be seen as not only the mysterious tale of a missing woman, but an examination on the nature of photography. Christian Metz has described how a photograph is a moment of death in which the subject vanishes and perhaps this explains the disappearance of L.M.. Fitts & Holderness have documented the search for a reality that is perpetually displaced, a subject that no longer and never did exist. Things happened but there was no event, merely recreation.