How to Deal: Art and Selfie in Alice Baxter’s Sometime later.

Living in the age of the selfie, and by extension, the #artselfie, it seems apt that Alice Baxter’s 2012 exhibition, Sometime later, presents found images of strangers posing with and touching monuments. Projected against a calico screen, these images circulate on a 30 second loop: students at Harvard touching a statue’s feet for luck, tourists grabbing the pope’s nose for wisdom, hands resting on a saint’s feet. In front of the projection stands a plinth with a bronze resting on it. The blinds have been pulled, the bronze is spot lit, and the images flicker in the background.

Baxter has made a monument of an experience. At the risk of this exposition folding in on itself, she presents both the record of the moment, and the moment itself. Interested in the expectations we bring with us when making the pilgrimage to a work of art, the show implicitly asks us to take part in this performance – to come look at the exhibition, touch the bronze and have our moment of reckoning. At the same time, records of this same experience, repeated infinitely by strangers in different places, glimmer just behind it. Baxter’s spatial and material conditions lend themselves to contemplative meditation on the ritual of touch, on the cool tactility of a bronze. The pace of the images gave enough time for the mind to absorb without wandering. Sending a graceful nod towards Benjamin’s formulation of auratic perception, Baxter asks us to consider the moment we encounter the art object and what this audience with its ‘presence’ might mean to us.

Remixing the experience of ‘looking’, the project is sincere in delivery and generous in the luxuriant production of carefully fashioned elements. Each component bears testimony to meticulous care, while gently humming underneath, the work is throbbing with the distorting effects of interference. Because at some point, the sepia-toned intimacy of Baxter’s project has to be punctured by the mundane realities of art tourism. Ritual pilgrimage is a well-documented component in the fabric of communal experience, and I can’t help but recall that in St Peter’s Cathedral, the smell of sweat mixed with the aura of the saintly. I remember an elbow digging into my rib when I tried to catch a glimpse of the Mona Lisa at the same time as a busload of tourists. And so, the logic of everyday life meets the dreamy narratives of romantic introspection and contemplation. The noise is the unheard hum of jostling crowds and sweaty fingers midway through posting an Instagram, the noise of our best efforts to catch ourselves in the moment, and the effort of effortless posing. 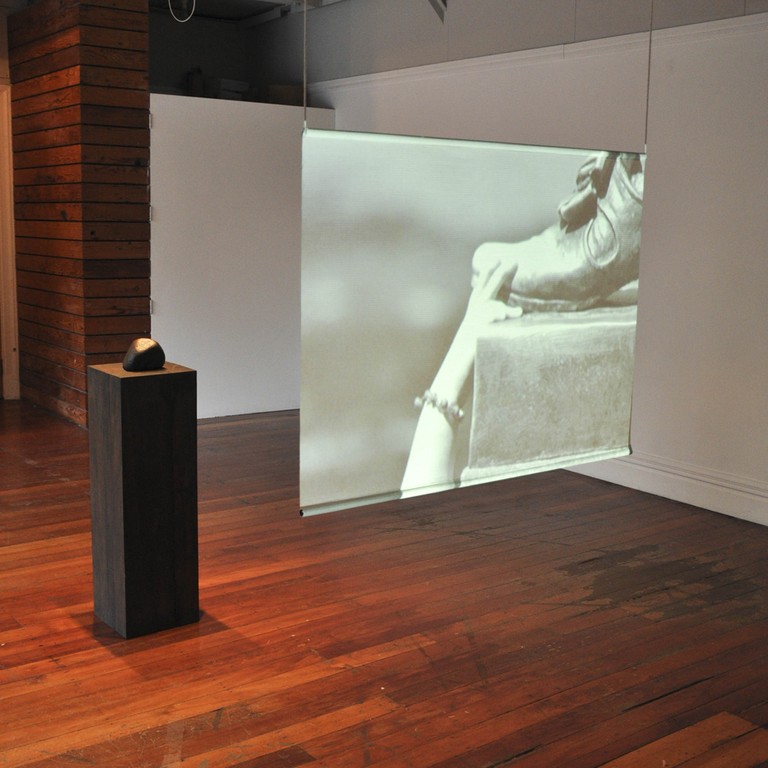 Each slide in Baxter’s reel has a vintage tarnish: monochromed pixellation, photos from ye olde image bank. What does this antiquing achieve? Aesthetically, the monochrome blends harmoniously with the sepia lighting, the creamy calico, the dark stained macrocarpa plinth. The quietness of such images lends itself to a contemplative goal. Sometime later probes the way the artwork is received by its audience, but it also risks leaning too far into the dream of its own romantic expectancies. After all, expectations usually need to be adjusted when faced with certain disappointing realities. Both the pyramids and the Mona Lisa are much smaller in real life than we’re led to believe. These images are suggestive of what Hito Steyerl has called poor images.1 Found in antique stores and op-shops they were then modified until they were consistently homogenous. Fuzzy in quality and interfered with, these images share common characteristics as well as thematic ones. ‘A copy in motion’ degraded over time, then again on the screen. Contiguously, the #artselfie is most commonly taken on a cellphone camera with fairly low resolution. It is then uploaded, tagged, shared to Facebook, Twitter, Tumblr, often taken from the more flattering downward angle. The new iPhones offer a dual camera, allowing the user to see their selves reflected in the screen even as they line up the shot.

Taking the phenomena of the #artselfie as a democratizing surface, this exhibition can be read as a doorway into a shared space of communication – the space in which we record and exhibit moments of ourselves with the art object of our (let’s call it) affection. Everything is near to everything else: someone somewhere is grazing their own hand over marble, someone somewhere is using their smartphone to capture the moment they met Monet. Using #artselfie as a key, the work of making something, making it to something, and making it in front of something can be read within Sometime later. The #artselfie gestures winkingly to a politics of aspiration, an agenda mired in a swamp of self-congratulation and TMI excess. Brian Droitcour’s project with DIS Magazine takes the regular cliché (do we see ourselves when we look at art?) and literalizes it, taking the conditions of social media (a mirror attached to a telephone) as its given ground.2 Meanwhile, Baxter’s show, which it is perhaps worth noting, contains no literal reference to the areas I have been discussing, asks us to slow down. The bronze is there to be touched, and at the moment of that touch, gallery visitors are inducted into The Moment. Baxter’s project requires us to enter less feverish territory than the areas addressed by DIS and Droitcour.3

But could it do more? Once a visitor has touched the bronze stone, and looked through the flickering images (hands on a boar head, a foot, a breast), what is left but a few moments of silence, space for a minute to consider the experience itself. The way in which Baxter’s project conceives of this Moment is characterised by something beyond physical presence. The work requires willingness to entertain certain intangibles like faith and luck. 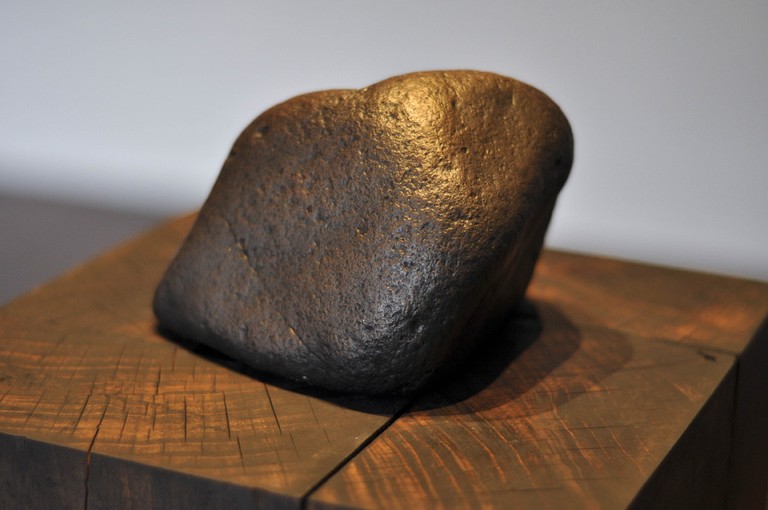 Many of the monuments we make these journeys to contain some kind of self-serving function, there to endow good fortune, luck, wisdom. Time worn pilgrimages and destinations embody centuries of touch, evident in the smoothed down contours of a statue, or stone stairs bearing the evidence of a million feet in the worn in hollows. The references to historic space manifests as an anachronistic quality in the work, leading me to consider the contemporary zone of this endeavor. What situates this work in the here and now? The Tumblr aesthetic found in much contemporary installation practice dictates that marble statues, roman pillars and other signifiers of antiquity have now become ubiquitous, but instead of the crazed clutter of post-Internet aesthetic, this exhibition is deliberately muted, simple and still. The bronze stone that formed the centrepiece of the room was chosen, cast and installed in a manner that invited touch while the muted, ambiguous shape of the bronze balanced the concerns of the project against a more basic desire for form.

Sometime later is a show that has allocated itself a discrete time frame with a particular choreography. The visitor walks in and regards the installation. Curious, they move closer. Looking round at the gallery staff,
“Can I touch it?”
“Yes”.
Hand on the rounded shoulder of the bronze, stand and look for a few minutes. Thank the staff, leave.

To return to my meta-narrative, the exhibition calls attention to the ritualised habits of exhibition visitation: we enter, we look, perhaps we study it a few moments longer. Something internal tells us to move on. But a singular element of opportunity reverberates through Sometime later: the permission to touch. Using the senses to consider an object offers a way of ‘learning’ that object, and learning what this object, or the experience, may mean to us. Rituals of touch are so embedded in our culture, and seem to offer something intimate and necessary.

The #artselfie provides a parallel to these embedded rituals, it may be that the obsessive record-keeping of instagramming and selfie-taking link us back to a form of ‘looking’ and reading, reading our own memories and experiences in the making. The filters offered by smartphone camera apps even add in the very textures of nostalgia, all grainy, soft focus and gold light. In the contemporary moment, we exist in such a haze of content that a moment of pure contemplation is a lofty goal. A moment’s rest from the image stream. Where the self regard of selfie taking memorialises the moment of “memory making”, Sometime later also seeks to capture that moment of arrival – the point at which the longed for experience is consummated. To the faithful flock at St Peters, the rubbed down, smoothed hollows of St Peter’s feet means centuries of faith. At Harvard, I assume participating in the ritual of touch means something as basic as being part of certain, exclusive traditions. In an art gallery though – what can it mean to touch an artwork? What can the contemporary art object endow us with? I doubt it’s a blessing; whatever it is, it’s something even more nebulous than luck. Sometime later considers the space of the self and selfie. First by delineating this space, then by holding us within it, if only for a moment.