Illuminated, A sculpture by Jude Robertson

When first entering the gallery space to see Illuminated, Robertson's tiny cast glass houses appear like diamonds set into wooden rings. The idea of settings and of personal treasure fits well with Robertson's work, which explores the New Zealand terrain, and the tensions that arise between natural and human features of the landscape.1

Jude Robertson graduated with a BFA in Sculpture from the Dunedin School of Art, and has exhibited widely throughout New Zealand. Her sculpture, Illuminated, is constructed from smooth New Zealand wood cubes and blocks that act like terrain, and cast recycled glass houses. The miniature landscape fills the gallery floor. When walking through Illuminated the viewer can clearly see the topography has been arranged into suburbs separated by an imaginary sea or town belt. At the outskirts, skyscrapers are suggested by taller, symmetrically placed blocks that stand over the domestic scene. Warm lights flick on and off inside the tiny houses giving the piece an atmosphere of quiet tenderness. 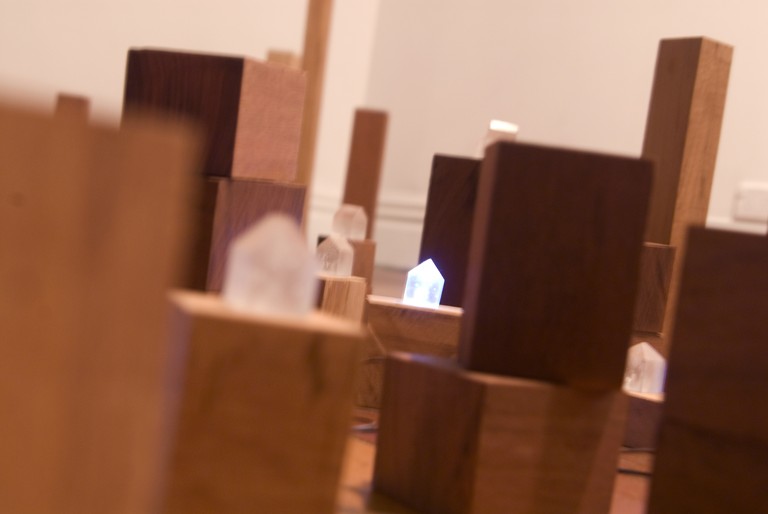 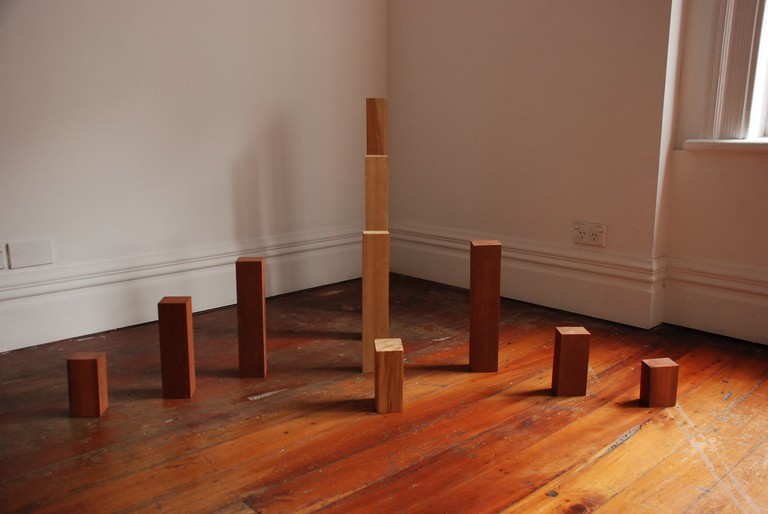 She walks down the hill to meet him. Most houses on the Mount were built by settlers, or so she was taught. Hungry men sawing down trees and then putting them back together again. Push and pull. People happen in these houses: a man and wife, a wife and wife, a wifeless man with a marigold child. Wires like fat black eels swim in to kiss each house. A house hidden up a long driveway. A house fitted into a crease of land. Houses picked up and thrown by a whirlwind. Tumble down little house. Why did they build them so far apart? In the distance someone turns on a rectangle of light—the curtains are closed—and then off. It comes on again. What are they looking for?

In his TED talk, architect Thom Mayne says of his profession: “What we do is, we try to give coherence to the world. We make physical things, buildings that become a part in an accretional process; they make cities”.2 It is the combination of geographic features and built structures that carve out the pathways of our lives. The stacked wooden blocks of Illuminated propose hills and valleys, the spaces between the boundaries linking suburbs. The haphazard placement of Robertson's glass houses (along with their cottage shape), encourage viewers to think of domestic dwellings, and the sculpture is reminiscent of flying over Dunedin's hilly suburbs at night. Recent research has shown recent growth in the world's mega cities—Shanghai, Beijing, Mumbai, and Mexico City—has been seen primarily in the suburbs. The population is moving outward,3 and Illuminated speaks to the renewed importance of the suburb. 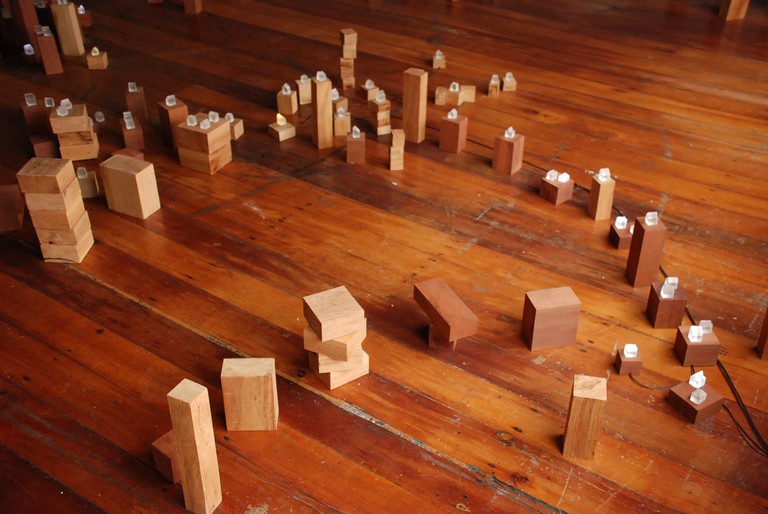 The man is quiet and beautiful. The man is sophisticated machinery. Push and pull. In the dark she feels much smarter than usual. The man is easy with himself, also. The man is sanded down to a fine grain. The man has tide marks. He says, It's never really dark here. You'd never be afraid.

From the street come occasional flashes from a siren or a security light. Much later: she walks down the hallway. She can see her arms are alight with tiny hairs. 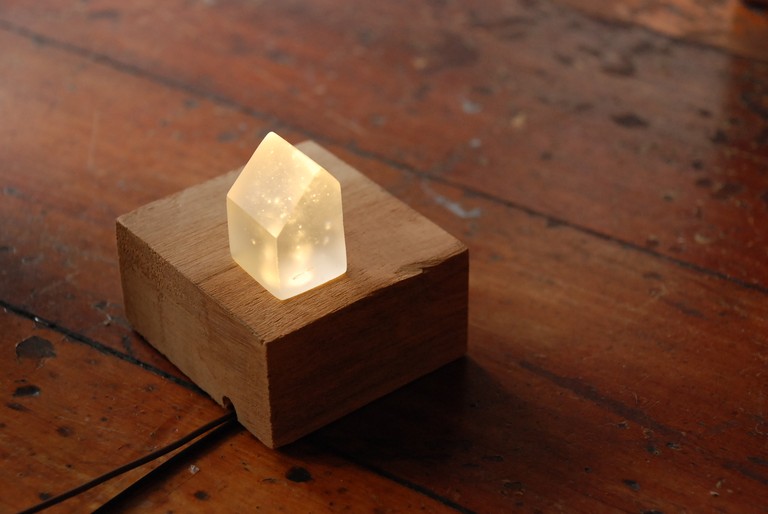 When Mayne talks about the accretional notion of a city he argues that a variety of random forces create a city or dwelling. The word accrete brings to mind stalactites that gather their mineral layers over years of repeated drips. The dual components of Robertson's work—the cast glass house and the wooden landscape block—suggest that repetition has a part in the formation of cities, or at least in their distinct personalities. Human pathways trampled out over time like the dusty line of a sheep track. The exhibition blurb states: "The transformative processes involved with casting glass are a reminder of the metamorphosis of landscape, the structures and environment. Illuminated proposes that the patterns of our natural and social environments are never static."

Transformation of our domestic environment happens at two speeds. The first is of daily existence—the personal space. Taggers spray a garage door, someone paints it over. Your neighbour builds a new fence or puts on a new roof. Someone takes down a tree. 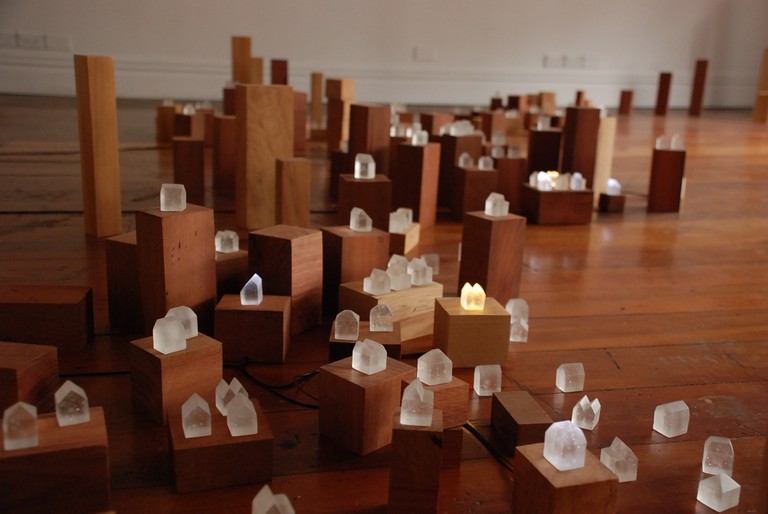 The other form of transformation—that of shared space—is of subtle growth. When I lived in Hataitai I was interested to see photos posted in the village of the suburb from the 1930s. I could still see remnants of the old landscape. Parks had been constructed, added to, repurposed, and expanded. The boat shed on the waterline (back then, women sat with parasols) became five, then ten. Tram lines gave way to electric buses. Only the shared buildings of congregation and education stayed the same: churches and school halls.

She stands with the man beside a light timber frame. They are building a playhouse in the back garden. He holds one weatherboard. There is a hammering in her head. He places on another, and soon the frame has a weatherproof skin. He calls the playhouse she and stiffens her with a diagonal brace. The man talks of dovetails as he leans over a chisel, chipping away. She thinks of a beak tapping on her palm.

The idea of building and demolishing is at subtle play in Illuminated. The size of the viewer in relation to the landscape means they could easily lean down and destroy a suburb with one kick. They could also take the components of house and wood and construct their own environment. Gulliver, you've been washed ashore on Lilliput. The initial effect is that of alienation from an environment where you would normally fit. The sensation is brief: lights go on inside a tiny glass house and you bend down. There are perfect bubbles in the opaque structure. The jewel-like quality brings to mind the preciousness of home.

The city looms like a camp Disney villain. It has a painted face. When she leaves, she takes the house with her in her head—the tiny study and bedroom with the oak glory box, mattress on the floor; three pairs of shoes by the door. It's not much, so she can fold it up and carry it around. During the day she looks through the transparent walls. I'll be back soon, she thinks, and then nods appropriately, smiles just enough. When people talk she thinks about the silent way worms and centipedes make their place in the dirt. They're just beneath. How warm they must be down there. 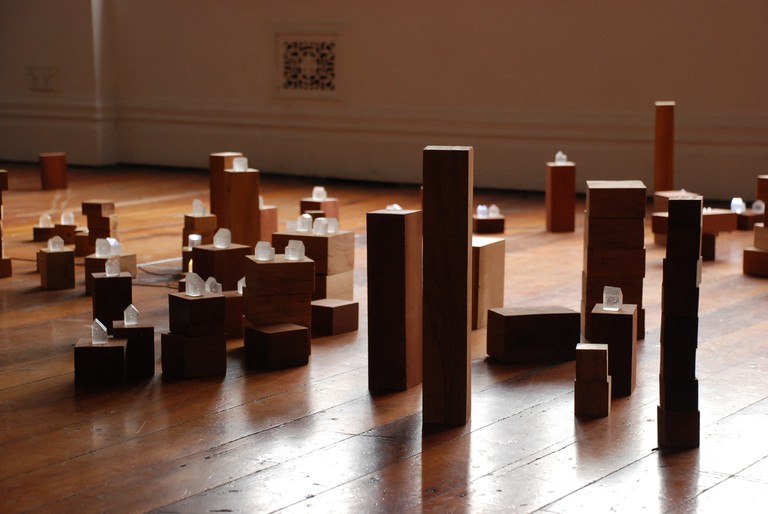