Knock On The Sky Listen To The Sound

I’ve often heard the museum and gallery, an institution born out of the secular realm of modernism, described as the atheist’s church. It is no different to any other form of Sunday pilgrimage. The room is usually quiet, the lighting low, we expect some sort of visceral experience beyond language and go with the intention of answers. Tiffany Singh is an artist who investigates ideas of ritual and ceremony within her work with the audience as a collaborator to this. For her piece at Enjoy Gallery and The Dowse Art Museum she enlists the communal help of the visitors to these spaces.

The wind chimes in Knock On The Sky Listen To The Sound allude to a Buddhist proverb and play on the Wellington cityscape, a place synonymous with the tumultuous element of wind. The participatory elements of her work are fundamental to their existence, without you the work would not unfold and be realised. She needs us to help her co-author the work. At Enjoy visitors are invited to take a wind chime from the installation and take it to the Horse Chestnut tree at The Dowse Museum in Lower Hutt. These two spaces contain separate works and separate energies, but together, with the help of the audience, will coalesce to make one artwork.

Although the work exists within two public spaces, the very notion of needing an individual to complete the piece adds a very private element to the experience, as the chimes will be carried with different people in their own subjective ritual. There is a tiered nature to this experience, one which involves the trinity of most religious pilgrimage: journey, sacrifice and reward.

As part of the exhibition Crystal City: Contemporary Asian Artists at The Dowse, audience members are also welcome, one at a time, to play the outdoor wind chimes like an instrument, creating their own time and space of contemplation. Bamboo wind chimes are ubiquitous in Buddhist temples and Singh herself has sourced these objects from her time in Vietnam. They carry a sound which is at times playful, but also haunting and chaotic. It is an instrument that has been used not only for it’s aesthetic qualities but also to signify change in wind direction, a charm of good luck, made of material that is widely used in South East Asia.

Blessing the space at Enjoy, Singh has turned what is normally deemed a neutral white walled gallery into a space loaded with energy. The space is treated like a readymade, a site with existing cultural meanings. This protection spell cast by the artist reminds me of the varying roles artists play and how in certain cultures the artist maintains a special social position designated to a shaman. With significant time spent in ashrams and temples across the world, Singh is well versed in the nuances of ritual.

Carole Duncan likens this ritual of aesthetic experience as entering a “liminal zone in which a state of exaltation can be reached through contemplation of, an engagement – perhaps even a sense of communion—with works of art presented as paragons of aesthetic beauty”.1 There are many art galleries who wouldn’t respond well to this analogy of their space as somewhat church like or even spiritual. The mere thought of it would detract from their aim of being a serious institution where methods of enquiry are satisfied rationally and within reason, far removed from the realm of faith. As Duncan states “we are, after all, a post-Enlightenment culture, one in which the secular and the religious are opposing categories”.2 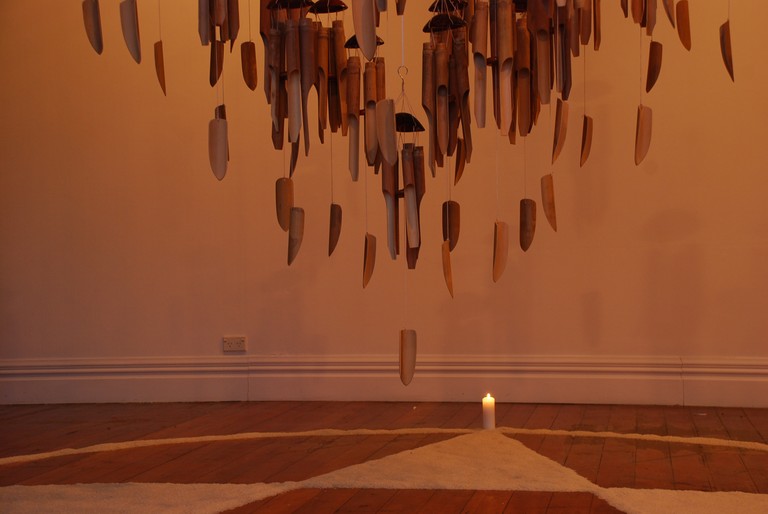 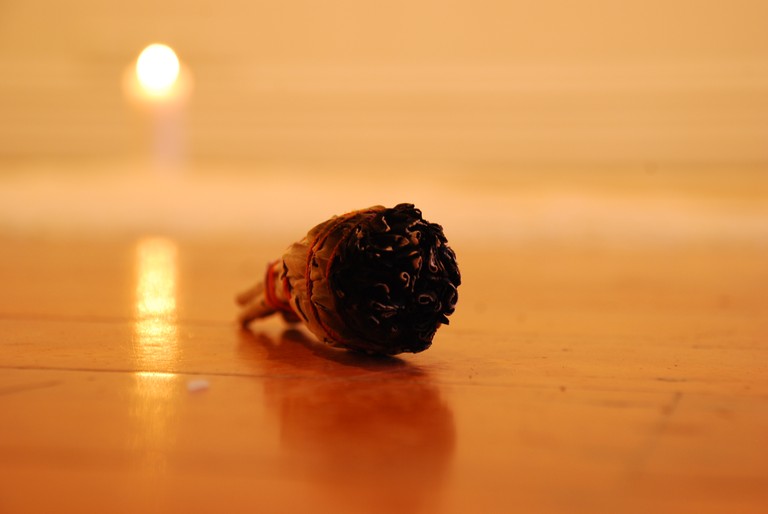 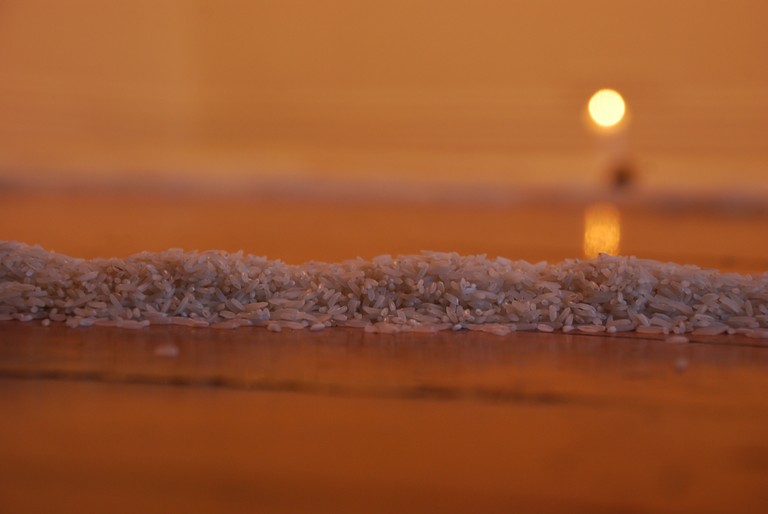 Singh’s interest in the gallery as a transformative and potentially spiritual space lends itself to an investigation of the nature of secularism and this peculiar segregation of science and spirituality. Don’t both involve a degree of faith, belief and wonder? I’ve always found it interesting that the  discipline of science has created a unique supposedly unemotive graphic language to describe matters which are poetic and conceptual.3 Time and space are described in numbers and symbols. It is almost as if language is not abstract enough to communicate it’s movements. I think this is also what Singh is aiming towards; that liminal space of experience beyond language.

At Artspace Singh presented Newton and the piece bomb.4 When you entered the work you could feel yourself entering some other zone, a sensation I can’t quite explain. The work developed over the following weeks filling the gallery with different colours and perfumes, the feeling of the space changing as each sculpture unfolded. An important aspect of Singh’s practice is a focus on colour and her attempt to provide a different interpretation of colour as an alternative to Newton’s original spectrum based on the refraction of light. Rather, she is looking at the emotionally transformative powers of colour found through her research. Looking at their affects on our senses she examines colour’s relationship to energy flow or chi, an area not often linked to impersonal rationality. Instead of Newton’s ROYGBIV; Singh is using violet, magenta, red, orange, yellow, green and turquoise.

There is an element of risk involved in her practice, the generosity of her work potentially lending itself to the unknown. Subjecting these instruments in Knock On The Sky Listen To The Sound to the mercy of Wellington’s elements could be hazardous and I can’t help but cite Outkast’s famous lyric from Ms Jackson, a song about apology and forgiveness “you can plan a pretty picnic but you can’t predict the weather.”

Perhaps this is what makes her practice all the more timely. In an era where reliability and trust in the environment is waning and humanity’s attempt to work against nature has clearly failed, her work has a tone of humble acceptance, generosity and solace to it. The participation of the audience suggests an interesting practice not only in passing something on, but also present in the Buddhist idea of letting go. Her work can be read as a response to the secularism involved in institutions of memory, such as galleries and museums and calls for them not to be distant, stoic or too factual. We need public spaces, where without being accused of tomfoolery or new ageism, people can feel and have a bit of a faith.