Responding to a live performance is always a bit of an odd, often nerve-wracking experience. Just as performers may go through stage fright and assorted states of mind and body on their way to delivering the goods, so to speak, an observer might just as well go through a large number of worrisome developments: anxiety, dry mouth, feelings of coercion, boredom, having to pee, and on and on and on. But I always get my performance from books, videos, images, I (the observer in this particular case) might say, NOT LIVE! What about some distance, historical, geographical, critical? And some mediation? How about pre-filtering this stuff for my genteel consumption? Some of these (perhaps hyper-caffeinated) anxious thoughts concerning liveness and the act of making art in the present moment circulated through my cranium, as a number of emerging artists got together recently at Enjoy gallery to both perform and, subsequently, to leave varying remnants of those performances behind.

In the events on view, no one theme got an upper hand, the works were highly dissimilar in almost every respect, so the challenge is to falsely sum up and unify what ended up a rather disunified and piecemeal experience. Of course this is not necessarily a criticism. Internal consistency is not a measure of any performance festival’s success. But likely the most common thread running through the physical, mental, and psychic exertions on offer, was that of a comparative newness to performance, and a pronounced interest in enacting and preserving an intimate experience within a public context. Quietude, constricted spaces, parody, restricting the number of participants/spectators, drastic shifts in tone, lengthy delays in real time: all of these were tactics used by the artists to avoid or challenge received notions of performance. 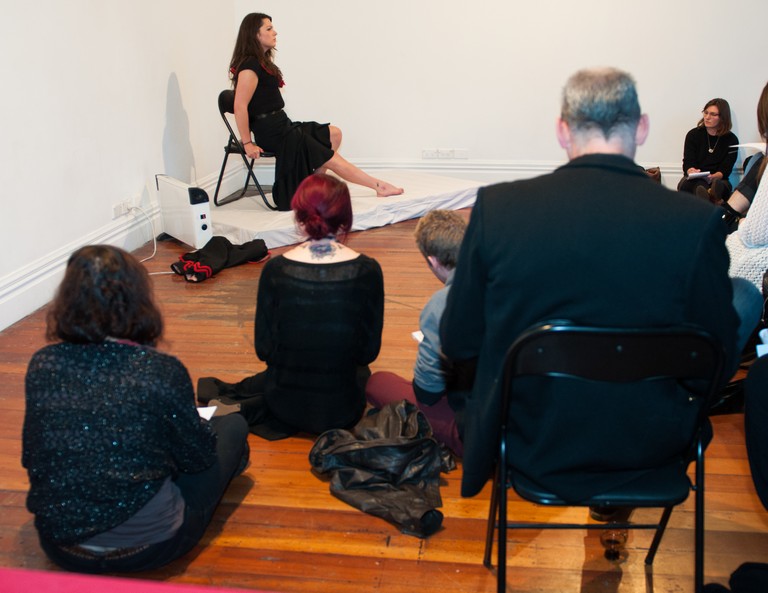 Upon arrival at Passed Life DeeDeeWitt’s performance, the audience was given a pad of paper on which to draw the artist, who in this case, became the model. Witt’s past works have investigated the political and social aspects of transgendered experience, and just as in this instance the artist blurred the edges of the roles involved, identities remaining at play while both “sides”—artist/model; viewer/participant—were very much at work. And as many of the (mostly) artists in the audience eagerly took up pencil and paper (rarely the primary tools of art making in the 21st Century), the situation was seemingly more quiet and meditative than tense and anticipatory, as blank pages filled up with jagged scrawls and nuanced shadings. 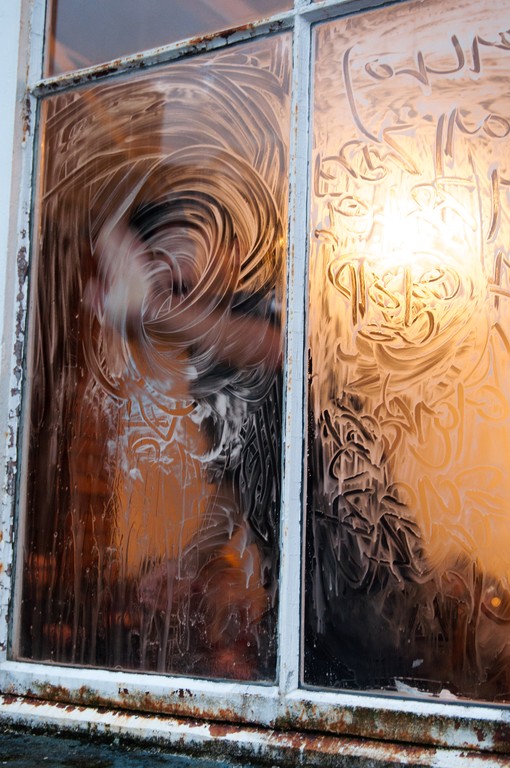 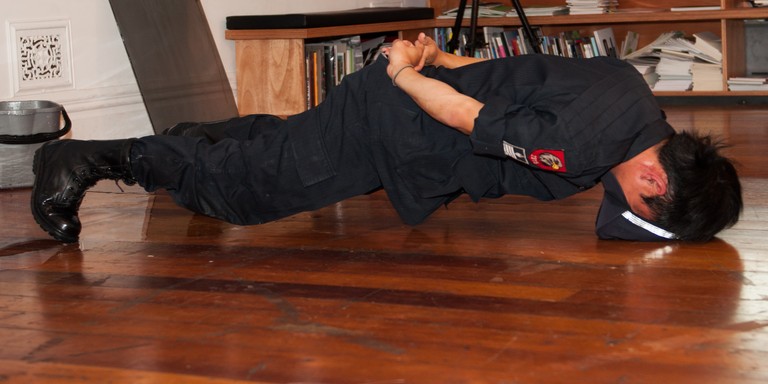 The intense and evocative performance works of Samin Son examine the harsh, dehumanizing effects of military service. In his case, he spent his obligatory time in the South Korean army and in the absence of art materials, made toothpaste into a transitory tool for drawing. In the artist’s recent TOOTHPASTE ACTION performances he re-enacts aspects of the military drill, replete with black uniform, cap, and boots, meticulous writing, violent washing, barked commands and responses, chanting and singing, and physically brutal calisthenics. All this is taken up with a vigorous ferocity, which is not only fierce, but poised on the edge of a heightened realm of sensation, with distinct connotations of ritualism and eroticism, recalling the works of Yukio Mishima and Antonin Artaud. Son’s works also explore the complex psychology of the individual as entangled within the social body investigated by several contemporary Korean artists including Do-Ho Suh. 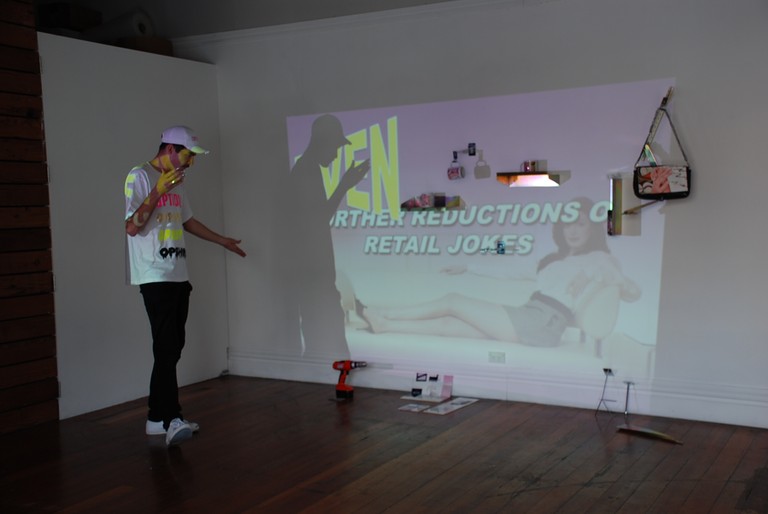 Oscar Enberg’s lively EVEN Further reductions on retail jokes was more frenetic than ferocious, with the artist parodying a completely over the top series of crude salespitches. Noisy graphics, bad jokes, loud tasteless—but utterly ordinary—dress stringing along a sort of stand up comedy devoid of jokes, as the artist evoked some Post-postmodern watered down wasteland of consumer banality. It was almost impossible to listen to the specifics as Enberg relentlessly related a litany of televisual tropes, email (so-called) humour, and other ghastly glimpses of the everyday weirdness. Unclear whether the artist was humiliating himself or the audience, this created a climate of nervy ambiguity. As to whether the artist succeeded or failed at his attempts seemed impossible to really calculate, as his territory is the general failings of our aspirational culture, ready to plunge into the vapidly presented future of commerce with both eyes shut, wincing from an inexplicable migraine. 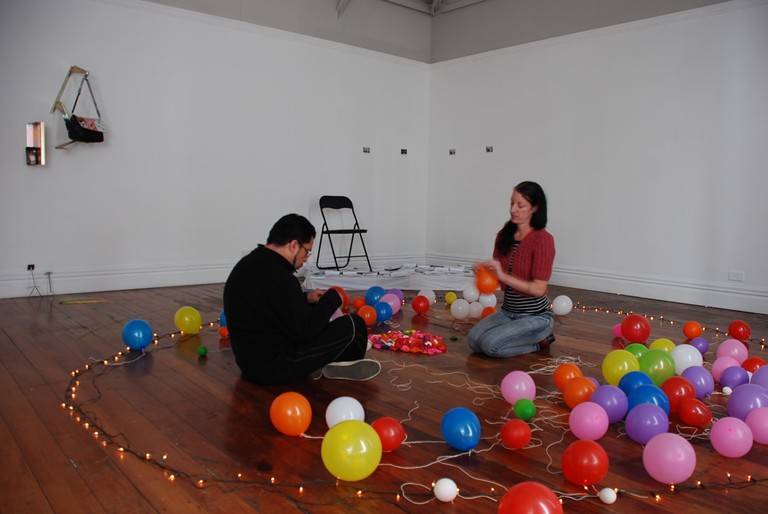 Canadian artist Sheilah Wilson silently introduced her work to individuals allowed into the gallery space one by one, with the following note: “I will be pleased to perform a party for the length of a breath: Take a balloon and put one breath into the balloon. Tie balloon with knot and string. Repeat three times.” Besides winding me slightly, Wilson’s performance recalled both the utter simplicity of the performance scores of Fluxus artists Alison Knowles and Yoko Ono and the frequent act (at least if you have children around) of playing as an adult, that is to say, getting on one’s knees with children, making sandcastles, playing with puppets and dolls, and wilfully conjuring the ridiculous into the real. 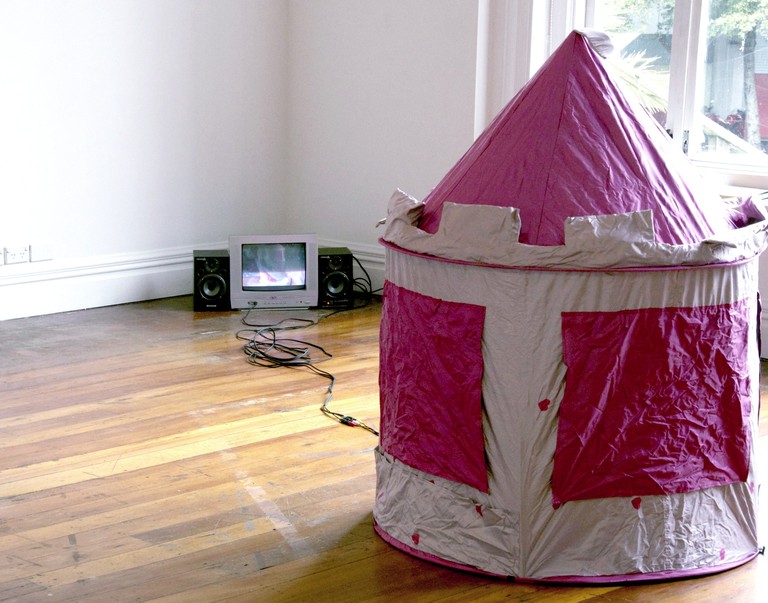 Alex Papanastasiou’s project involved the artist shaving all of her body hair apart from her eyebrows and scalp, over the course of more than five hours, while situated in the confined space of a brightly colored children’s playtent. The coloration of the tent mirrored to a degree the bright sonic pop of Bananarama’s 1986 number one hit I’m Your Venus. While shaving, the artist held a small camera to record the process. Papanastasiou has created a number of striking performances recently that seek to subvert normative assumptions concerning gender with considerable subtlety, humour, and a strong awareness of performance history. The most engaging aspect of Papanastasiou’s work is its agile movement between bold tasks involving bodily manipulation and endurance and its highly playful, yet theoretically informed, acuity. 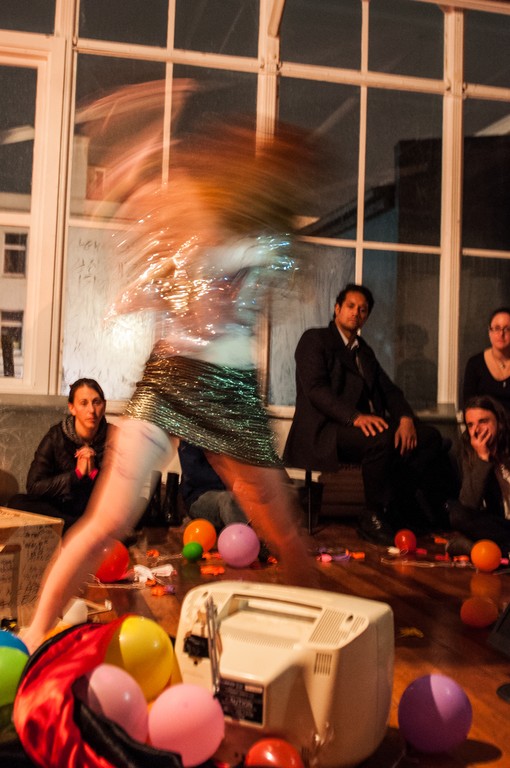 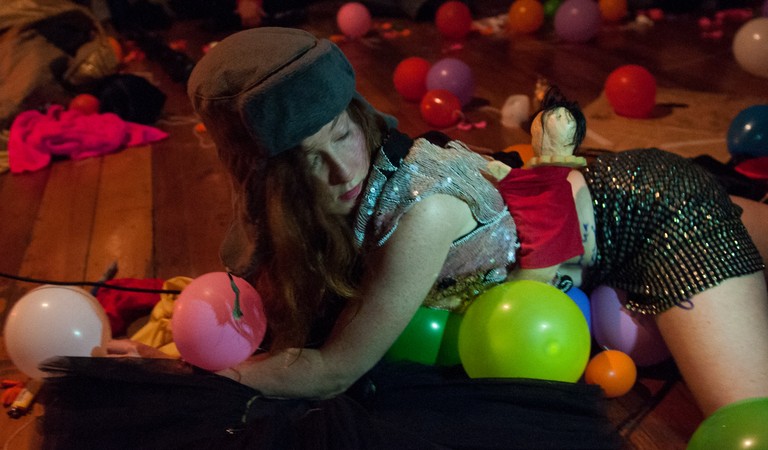 Auckland-based artist Alexa Wilson’s work entitled Weg: A – Way was perhaps the most overtly theatrical of the lot, desiring to create some sort of atmospheric post-Goth dreamspace mixed awkwardly with the relational quasi-therapeutic event. Music and dance dominated the proceedings, as Wilson’s occasional muttered musings were along the lines of: “Foucault…he’s the shit!” The performance involved precarious shifts in tone, but the best moments involved Wilson’s considerable skill as a dancer, moving in a more agile manner than the overall piece itself, as the artist while waving a sword, appeared to veer towards the evocation of shamanism and ritual. 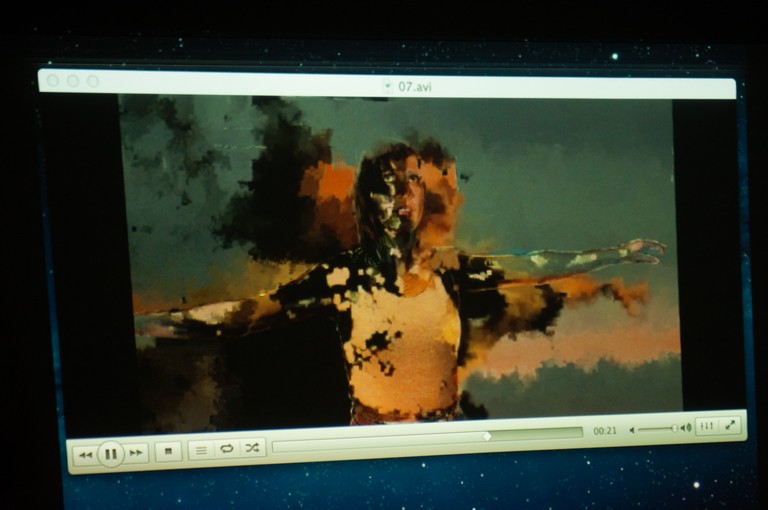 In Erica Sklenars’ performance-event, The Only Girl in the World, anticipation, waiting, and wondering seemed the dynamic core of the work, as initially the artist spent time creating video clips of herself posing in front of a dark backdrop, a deliberate, prolonged period of methodical preparation, manifestly undramatic. Following this, Sklenars uploaded the video segments onto her laptop, as the assembled (reasonably large) group waited, waited, and waited, to see a series of projected montages of the artist inserted into scenes from popular Hollywood romantic comedies from the eighties to now, “acting” along with Leonardo DiCaprio, Patrick Swayze, and other digitized phantoms. In this way the comic juxtaposition of the artist in her various stereotypical roles—batting eyelashes, ready to dance, giggling nervously—was offset by the terrific set up, and the delayed gratification, which called attention to both the technological mediation (defined also by its pixilated distortion) and the active merging of the live and the archival into a strange, and entirely unsettling present.

While each of the artists involved in this curated series of performances has been enormously productive, several of them internationally, ultimately I sensed that these creative activities were still fresh and urgent, and that rather than being senior, veteran artists these folk were gaining a lot by being in the midst of honing their individual processes and procedures. And in the very premise of the exhibition, the notion of inscribing traces, or the act of tracing, several of the manifold meanings of the word were invoked: tracing as drawing, or copying; the evidentiary traces, of a previous situation; to trace the lineage or genealogy of an idea; and to trace the itinerary of an object or body in motion. And perhaps the very collection of these traces even as residual mental maps for the performers/viewer/participants makes the exhibition much less ephemeral than it might initially have purported to be.