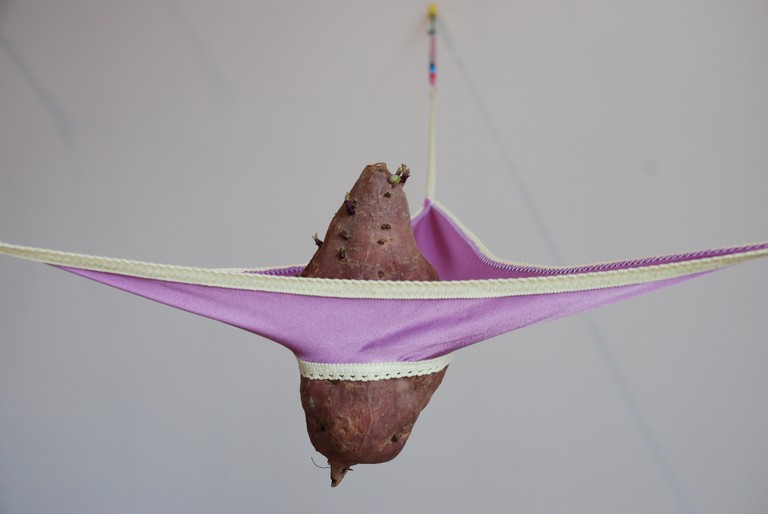 This work’s a mystery to me. I look at it and I wonder, what does it mean? It’s true there are clues both
in and out of the artwork, but they don’t seem to add up. However, there are always things to think about in art. We all know how to ‘read’ artwork; in fact we rather enjoy the intrigue, eh?

What does she mean? The plants are there, alive, living, literally, they aren’t inert material such as we are used to in an art gallery. But when I see them, they’re looking a bit wilted, a bit limp. Perhaps the gallery minder forgot to water them that morning? These plants are alive, but only because someone maintains them. Like all indoor plants they will die if left uncared for. And so I wonder what future these plants might have, if any. It seems to me they have nowhere to go, no way to go forth and multiply.

What does it mean to be ‘alive’? What is life, and where does it come from? For, if evolutionary theory gives us a satisfying mechanism for the development of life, its origin still remains a mystery. The science writer Graham Cairns-Smith went as far as to make this explicit in the title to his book Seven Clues to the Origin of Life: A Scientific Detective Story.FTN2 It’s useful to remember that the theory he describes—that crystalline clays were the ‘building blocks’ of the replication mechanisms RNA, and (in turn) DNA—is just speculation. But the idea that the earliest ‘life-forms’ were riverbed clays, mineral deposits with particular structures that ‘reproduced’ themselves is, none-the-less, intriguing. It posits that the func- tion of reproduction is what defines life; that one chimpanzee alone in a cage is no chimpanzee. Can I therefore fancifully imagine erotic love amongst the sediments? At least dreaming clay has somewhere to go—perhaps on to form the basis on which all life continues to this day—unlike the sad biomass in Lepper’s installation. 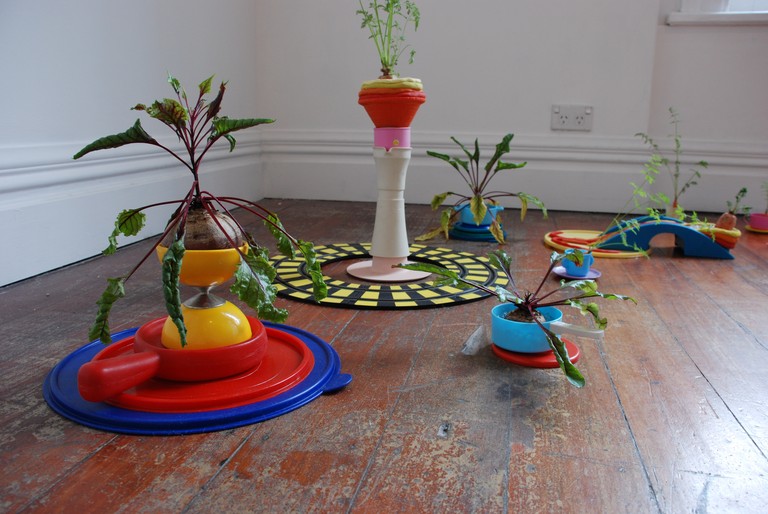 Is it too harsh to call Lepper’s plants ‘sad’? But it causes me think about the image conjured when I think ‘pornography’: that of of an aging man at his computer, fat, bald, sweaty, masturbating to images of young women bent over anus sucking on disembodied cocks. It’s... gross, but why? One answer, of course, is the argument proposed by first-wave feminism, as is explicated with such vehemence by Andrea Dworkin: ‘the major theme of pornography as a genre is male power, its nature, its magnitude, its meaning.’FTN3 It revolts us because ‘male power is the raison d’etre of pornography; the degradation of the female is the means of achieving this power.’FTN4 I can’t disregard this. For while it is not exactly ‘mainstream’ social ethics, three decades later I realise that Dworkin’s politic so inextricably changed my view of the world that I hesitated to even write ‘feminism’ in the sentence above, and always hesitate to think about, to make art about or to write about pornography. But to acknowledge Dworkin does not preclude other understand- ings. She is not wrong, but her argument is also no longer enough. It forms an incomplete picture of pornography for it excludes, amongst other things, living desire; Marcuse’s Life Instincts.

If Lepper’s work claims a gender politic, then it’s subtle, ambiguous, and one that disrupts binary subject/ object divisions. While she herself positions Life Instincts outside the pornographic, to me her assertion that the ‘visual sensuality will playfully attribute equal potential for erotic experience to an audience’s body, as to that of the vegetables involved in the work’FTN5 does suggest at least one of the characteristics of the pornographic—its ability to close the space between the subject represented, and the viewer. For, with the pictorial conventions of pornography, distance is shrunk. As in the act itself, the space between self and other is overcome. Here, look closely, a hairy root pokes through panties and yams swell. The point, at least for the consumer of pornography, that sweating man, is emotional engagement: desire, arousal and satisfaction. The abjection constructed in pornography—the cock, cum, the anus, glistening, and the becoming animal—contributes grossly to this, as in sex itself. The things we do, things that in the cold, hard light of day are rather embarrassing, are just the things that make sex the delight it is. Degrading, as Dworkin would have it? Perhaps yes, all too often when man oppresses woman, but not usually, not normally.

Of course sex is not only delightful, it’s normally necessary for reproduction. Which points to an expla- nation for the incredible success (if success is measured by amount) of pornography: all that masturba- tion, that sowing of seed is a burning desire to reproduce, and therefore, to be alive. Old man lusting after young woman, because for or a little while he is young again, in love with that girl: talking to her; connected; feeling the intensity of colour cherry red; the tenseness of strap and clasp. In this moment he’s got somewhere to go, an as yet unmapped future. Pornography is Marcuse’s Life Instinct pictured in magazines, writ over and over again across the Internet, in a vast, spreading fleshy-pink web of inter- linked desire. See, feel, a smooth curve, somewhere between baby and electric blue. And in a non-linear fashion there is no plan, unless it’s an emergent one; ultimately it’s so pointless, the spent seed so fruitless, proliferating dead-ends. It’s all very sad, sad biomass.

Kate Lepper’s Life Instincts is a mystery because it’s a contradiction; both a joyful expression of Marcuse’s Life Instinct, and an exploration of the awful pointlessness of human instinct. No wonder I was left won- dering, for the work appears so cheerful. Although it might be humorous, it’s not really funny, and like the tragic drama mis-categorised into the ‘Comedy’ section at the Video Store, it will end either in tears or understanding, new and different.