The body leaves its residue everywhere: breathing in tiny specks of dust and spores, breathing out bacteria and the dampness of used air. Looking in—inhaling—an absorption of external matter into the body; breathing out, an exhalation of the same matter, which has now been subjected to the influence of the body. Hannah Valentine and Vivienne Worn establish this relationship between looking and breathing in the title of the joint exhibition at Enjoy Public Art Gallery. Working between the contested spaces of the archive and the gym, they consider the importance of the body’s presence in these spaces and offer a return to physicality.

The proliferation of the gym in the 1970s was an effect of a growing demographic of urban, middle-class, single North Americans. This demographic had recreation time, and a collective ambition to realise modern North American concepts of beauty and an individual responsibility to maintain the body’s condition.1 In this post-war period of North American prosperity, the commercial response was to commodify recreation time. Commercialised exercise became something that separated physical activity from purpose. In his essay "Against Exercise," Mark Grief expresses this as being the labour of blue-collar workers abstracted into voluntary action.2 So, from the beginning, there has been something divisive about the space of the gym.

In Aotearoa, leisure time emerged as specific state policy. The Minister of Internal Affairs for the first Labour Government, W. E. Parry, believed that the strength of New Zealand would be built through physical activity. As Caroline Daley writes, his subsequent implementation of the Physical Welfare and Recreation Act influenced the standardisation of a 40-hour workweek, allowing two days for leisure time, which were to be used in a health-giving way.3 My granddad, an Irish immigrant farmer, has a distaste for the purposelessness of this sort of organised recreational exercise. For him, it signals a surplus of energy and time and a deficit of hard work. For others, the gym is a space of refuge and re-familiarisation with one’s own body—although access to the gym also requires enough energy, time and money, and these requirements are prohibitive. Regardless, the gym has become a pillar of modern urban life, symptomatic of working lifestyles that encourage the segregation of work and exercise.

The rise of the gym signals the transformation of the body’s motions into a commodity through an on-going focus on efficiency and the industrialisation of labour. Jesper Andreasson and Thomas Johansson understand this commodification through George Ritzer’s McDonald’s framework, which posits that the appeal of fast food has four distinct characteristics: predesigned process, efficiency, predictability, and control.4 Meal time can theoretically become homogenous; what you ordered last time will be the same as what you receive this time, and the meal of the person in front of you will look the same as yours too. Equally, the commodification of the motion of the body allows movement to be repeated and regimented. Workout plans allow the gym-goer to “order” the results that they want, and these results are presented in comparison to someone else who undertook the same regime, despite the diversity of the body. In addition to this, Grief notes that gym-going “expresses a will, on the part of each and every individual, to discover and regulate the machine-like processes in his own body.”5 He asks, “how do we acquire the courage to exist as a set of numbers?”6 Each aspect of the space of the gym prioritises and rewards measurement of the body in quantitative terms. Sets of numbers are comprised of calorie counts, repetitions of exercises, weights of equipment used, and so on. Thus, the courage that Greif talks about is built on competition and individualism. Our individual sets of numbers can be compared, against another, or ourselves, to determine our desirability. The allure of numbers to articulate the body is associated with those four tenets that Andreasson and Johansson discussed; numbers are predictable and efficient, and easy to set parameters around. Perhaps this is the body’s industrial revolution, transformed and sculpted by the availability of new technology and market forces. 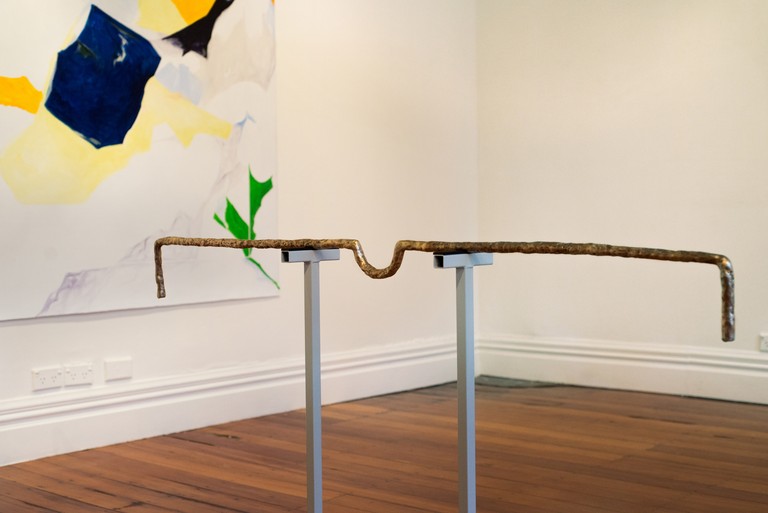 Economy is inextricable from the metal stands that Valentine’s sculptures are strung over, looped functionally with thick cord. These stands are as equally a part of this work, titled Circuit, as the tactile bronze rings. There is an absence of hierarchy between the two materials, despite the historic monumentality of bronze as superior to the functionality of steel. The sculptures are presented like clothes in a mid-range shop. The existence of this kind of stand in a retail environment is only ever for the presentation of something else, yet is minimally informed by this interdependence. Through replicating these methods of display in Circuit, Valentine suggests that the rings are an acquirable commodity. The undecorated nature of the stand highlights the bronze rings as the point of desire; contrasting aesthetics producing consumer libido.7 Valentine’s gym-cum-marketplace offers up the commodification the body’s motion for purchase.

The viewer is invited to touch Valentine’s sculptures. The bronze rings are marred with the fingerprints that Valentine’s own body left on them in their making. Her grip is forceful, squeezed—the memory of creation is physical in itself. There is an implicit intimacy in retracing the marks left by Valentine’s labour. The smell the sculptures leave on my hands is the same metallic tang that I remember from when I was a child, counting coins from a moneybox. Within the experience of Valentine’s work, commodification seeps into every perception. 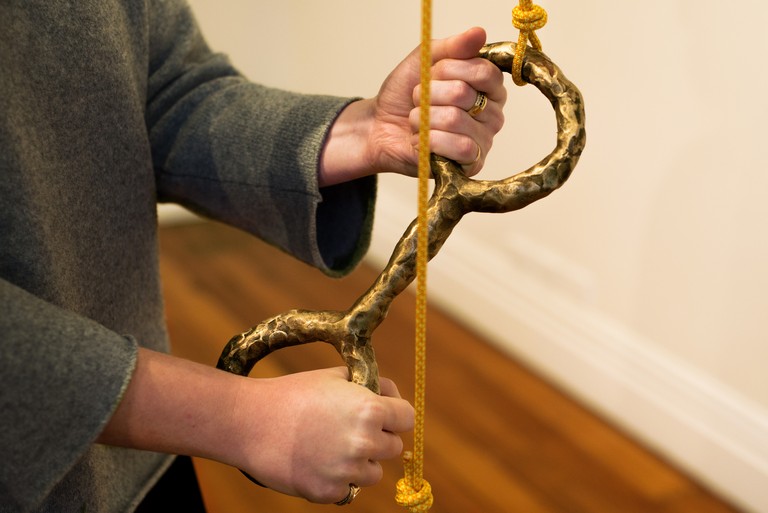 There is something obsolete about the gym space that Valentine recalls. The recurring ring forms in Circuit are dislocated from the sophisticated apparatus of the modern gym. No Body/ies in the Gym characterises this as “technology [replacing] the athletic body in motion.”8 Previously, gym equipment was simplistic and intuitive, relying more on the body than the equipment. Complex and specific, specialised exercise machines now dominate the gym and effectively enabling sustained activity while the body is still static. These contraptions are closer in likeness to the stands in Valentine’s work, with their industrial welding and powder-coated surfaces than to her hand-forged rings. In this way, Valentine’s juxtaposition of nostalgic equipment with the framework of the modern gym is an argument for the resuscitation of the agile human body, and as extrapolation, of the body as a vessel for haptic forms of knowledge.

A return to knowledge is central to Vivienne Worn’s painting in Looking in, breathing out. Her paintings begin with the work of New Zealand expatriate artist, Rhona Haszard, who has been largely omitted from our nationalistic, Pākehā and male-dominated art historical canon. Looking to Haszard’s archive for source material, Worn starting with digital records before pursuing a physical encounter with the paintings of Rhona Haszard. Haszard’s paintings are most important in their textural quality. The surfaces of her paintings are not entirely cohesive, especially in her work from the mid to late 1920s. Instead, the image is pieced together from sections of painting, moments Haszard spent developing different areas at a time. This piecework process is betrayed through the painterly seams in the works, showing slivers of primed canvas. From this, we can understand a similarity between Haszard and Worn’s processes. In Haszard’s paintings, her concentration is rarely on the whole, but on the parts that constitute it.

In Isabelle Graw’s seminar The Economy of Painting: Notes on the Vitality of a Success-Medium for the Jewish Museum, she references Hubert Damisch’s observation of painting as an art that reveals nothing but the traces of activity mediated by the brushstroke.9 A painting is a finished thing and perhaps is no more finished than when it is admitted into the archive. Worn’s brushstrokes are traces of digital access to the archive, but also speak to the action required to create a large-scale work (Breathe (Haszard), 2018) and then to compress this (Details (Haszard), 2018). In Breathe (Haszard) the viscous application of the paint is a record of Worn’s own motion. This work is 1.8 by 5 metres, so the body cannot gain control over it. Interestingly, Haszard’s own work tended to use a more modest scale, nearer to the clipped size of Worn’s Details. 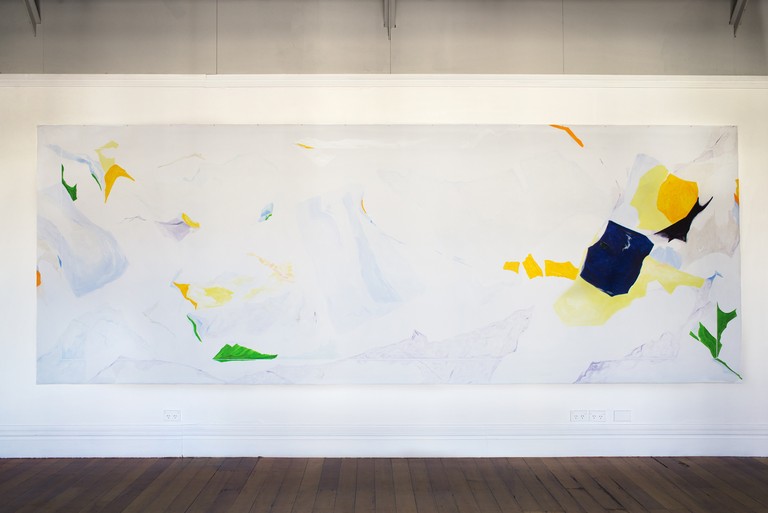 The way we have accessed information influences our reinterpretation of it. The residue of Haszard’s process can be found in Worn’s transcription of thumbnail icons into the composition of her work. Attentiveness to the individual parts of a work is important when using a digital archive. The ability to scroll through thumbnail icons in a digital collection and zoom in on fragmented tiles of a selected image is an attempt to wrestle against the flattening effect of the computer screen. There is an echo between Breathe (Haszard) and Details (Haszard), which sat on the perpendicular wall of the gallery. The dialogue occurring between the two replicates the zooming and cropping that distinguishes an online encounter with Haszard’s archive. Details (Haszard) appears as a clipping of Breathe (Haszard), but cannot quite be matched with where it came from. Its similarity frames it an extension of the larger work, not a facsimile. Haszard is present in Worn’s slices of specific painterly moments, but in Worn’s apparent clipping of her own image, there is a matryoshka-like relationship at play—a clipping of a clipping of a clipping. With each new image, we travel further away from the first. The truth of the archive is thrown into contest.

The archive is often seen as a vehicle for information, one we return to in order to interrogate historical documents and narratives. In her essay Tactile Affects, Jennifer Fisher emphasises experience as a precursor to knowledge.10 Using Fisher’s text to understand the archival experience, we can recognise that the return itself often produces the most valuable archival information. In Worn’s further engagement with Haszard’s archive as a physical space, her proximity to the paintings as tangible objects creates a relationship that exists in the present moment. The viscosity of the paint application is central to Worn’ s understanding of Hazsard’s work, and this is something that can’t be detected without a physical encounter with her archive. Subsequently, Worn’s work in the archive of Haszard can only be a product of a contemporary moment, collapsing the spaces between past, present and future. The emphasis on framing in both of the paintings mediates the archival process, indicating that the contents has been borrowed from somewhere else, yet simultaneously marks Breathe (Haszard) and Details (Haszard) as new creations.

The implication of the archive in remembering canonical art histories adds a weight to Worn’s work. It is not an inconsequential space to work in, just as the contested space of the gym is thorny too. A frequent criticism levelled at revisionist art histories is that they still require inclusions and exclusions, and therefore, an assertion of the power of the person making those decisions. However, in severing Haszard’s work from existing canonical frameworks, Worn avoids confining her to a single historical location. Instead, the archive has been split open, vulnerable to the porous nature of time.