Landing, a two person show at Enjoy with Raewyn Martyn and Noel Ivanoff, is about these artists’ individual responses to the gallery space and its entrance in terms of architectural properties, and in a strictly limited way, to each other’s projects. The two artists’ approaches are as different as you can possibly imagine. One makes work that is practically invisible, so ‘dematerialised’ that it remains mostly undetected by most visitors unless pointed out. The other places carefully constructed items on the walls and floor that refer to the procedures of storing, displaying and transporting of art—and its archives of art history and social context.

With this show, Noel Ivaonoff's paintings can just as easily be called 'sculptures'. Two wall works extend a painting series of 2004 (Soft Ground), exploring the structures of wooden forklift pallets, using two sorts of protruding thickness and vector accentuations to allude to the space's floor/ceiling (horizontal) and with white oil-painted MDF panels, emphasising three vertical bars—one and a half of which are behind and between them. The two paintings together demonstrate a complementary relationship where each partially exposes what the other hides.

So the notion of support, what physically keeps a painting on the wall becomes a metaphor for the social elements that ensure the same. The three floor ‘paintings’ reference the contained space of the gallery itself through cardboard box forms with open tops and bottoms- the support that holds the viewer in position to engage with the art. These works have their vertical panels lined with white polystyrene or unpainted plywood, and one floor flap is made of painted MDF.

With the bottomless cartons and rectangular floor spaces enclosed by the white walls, the polished planks are showcased as a foil for the cadmium yellow MDF, panel and cardboard flaps. The three boxes are positioned carefully in an L-formation, facing the corner where the short gallery end wall meets the long wall on the right with the large window, and away from the window to which Raewyn Martyn has discreetly added painted areas, near the door.

It is the box on the floor closest to the corner adjacent to the window, that has its outer flap made of MDF. Its cadmium yellow is possibly a symbol for sunshine and the outdoor elements. The inside cardboard wall running above that flap is unlined, unlike the box's other three polystyrene covered inner walls. The equivalent wall of the box directly behind it is raw plywood, and the third box to one side has all four inner walls lined with much thicker polystyrene. As if it is a sort of sideways glance at artworld hermeticism. 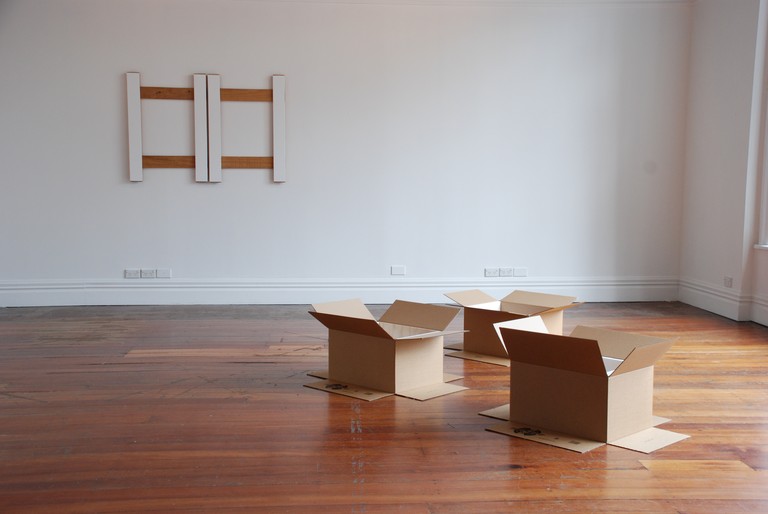 There seems to be a overarching logic behind this arrangement- a progression leading from exposure outdoors to the harmful light (the yellow rectangle flat on the floor), through the thin outer shell of a building (the cardboard side), then the inside wall of a gallery (the plywood sheet), to finally enter the thick walls of an inner sanctum: the protection of the art institution as a placer of value on the contents of the space. Ivanoff has constructed a sequence of three forms that the viewer visually follows through careful examination, the eye hopping from container to container.

With the final cardboard and polystyrene one becoming a symbol for the gallery space, and its thicker walls seemingly the ultimate ‘paintings proper’, the humorous inaccessibility of the ‘painted’ art on the floor introduces a imaginative component where the viewer (as a sort of homunculus) mentally jumps into the ‘white cube’ to get a better look. The presence of these polystyrene panels in such an inaccessible location- and their reduced scale- thwarts any visitor expectation of wall paitning, while instead opening up an examination of the gallery architecture.

As with his earlier Picture Plane–Lime Peel works of 2003, where there was a pairing of ‘looked at’ painted surfaces with rpints on polyester fim ('looked through') from those surfaces, Ivanoff uses a binary structuring device- this time ertical wall pallets with horizontal floor boxes as framing and scrutinising devices. They encircle gallery surfaces, unlike, say, Martyn’s paint interventions which showcase through juxtaposition or insertion.

Other alternative- but wider- meanings also arise beyond the gallery space itself. The 'box paintings' could be lidless and bottomless receptacles for cultural meaning (archival depositories of cotextual footnotes, as if for files) while the 'pallets' become imagined devices for transporting the painted physical objects and logistical processes of organisation. So we have here symbolic containers for art historical particulars, with an accompanying cultural context woven in, plus symbols for the co-ordinated teamwork that bring the art to the gallery and install it.

Yet for all their allusions to a social matrix that sustains an art envrionment, these paintings (even though they are also elements in an istallation) are very much still about the pleasure of making discrete objects. They celebrate the manual manipulation of materials and a minimalist aesthetic, the pleasures of inhabit- ing a workshop and a particular studio. No phoning up a fabricator with specs and having the final object delivered to the gallery by opening night.

That however doesn’t mean the placement of the parts within each work, or the works within the total gallery space, is ad hoc. Pleasure in planning the construction is also apparent; thinking through the challenges of the Enjoy project, what the space needs, what any indirect interaction with Martyn’s work might require. The precision of the ingredients and their spatial location confirms that, with no surplus waste. Nothing left to chance.