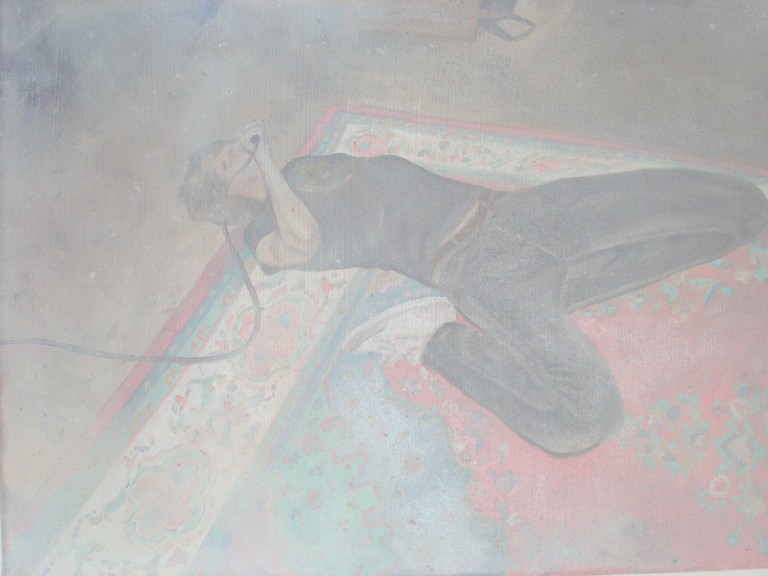 Underpinning this exhibition’s creation was a desire to test both the differences and similarities in our practices. When working in relative proximity, people’s frames of reference inevitably draw closer together, and certain resonances spring from shared concerns. But what are these resonances? Often they seem obscure, to be perhaps illusions or merely superficial likenesses. Clearly the latter is not so in our case—Selina does small paintings while I do big ones, and this is certainly not a premise on which to base a show. Likewise: our colour, handling and use of images bear little resemblance. Because of such straightforward distinctions though, I suppose there is a complication of how one might understand the relationship between different approaches to painting and different forms of viewing, considering that for both Selina and me it is a certain kind of intimacy which we are seeking. This intimacy, I think, is what counterbalances our differences, and is arrived at via the distillation of specific content into content’s potential.

Instead of approaching the issue of potential directly, maybe it would first be useful to consider why intimacy in painting has been important to the two of us. Why particularly intimacy, for after all, is there not an intimacy to any painted surface, any crafted form? Not necessarily—true intimacy derives from neither the careful observation of a subject, nor the brush caressing the canvas: it is a matter of touching and being touched, as Thierry de Duve might say. Genuine intimacy is founded in reciprocity, rather than in processes where information flows only one way, such as representation or artistic intention.

An exchange of this sort demands that absolute control over the work’s evolution be surrendered. The way in which such a process develops is different for each of us, as Selina’s negotiation is with images, while my own is with material and formal contingencies. Yet we both seek to address the increasing marginalisation of this peculiar intimacy in daily viewing practices, as the experience of culture is ever more dominated by streams of visual matter whose aesthetic and semiotic content is apprehended and consumed near-instantaneously. What are missing are visual encounters which are creative, which compel generosity from both picture and person.

Selina’s paintings are informed by a desire to connect with random images. This desire is governed by, perhaps even founded in the contradictory experience facilitated by a Google image search. At first, and in spite of the searcher’s entry, the appearance of a given set of images can come as a surprise. But though particular results may be unexpected, it was of course the searcher that called them up out of the infinite image bank of the internet, and some sense of responsibility or closeness is fostered. One is given what appears to be an intimate glimpse into a stranger’s life—at least a representation of it—and feels the resonance of an alien subjectivity with one’s own. 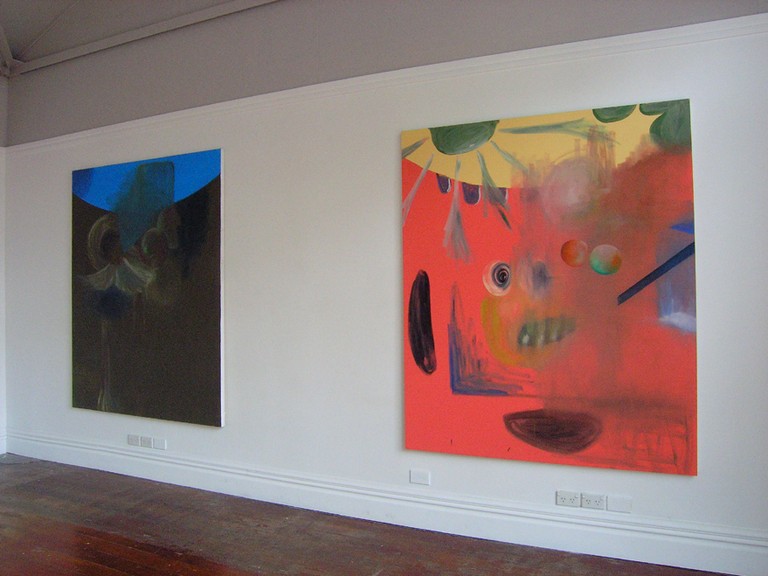 It is through such a process that Selina finds a reciprocal touch with her subject. It is through such a process also that we touch upon the nature of contemporary image circulation. For it is the search engine, more than any other device, which makes transparent the degree to which an image’s meaning is depen- dent upon its context. The modes of presentation most commonly employed to distribute visual matter (television, advertisements, the internet) demand that we understand that matter primarily as content. But the search engine diffuses this by revealing how contingent the methods by which images accrue meaning are. The dumb objectness of the image is brought to light: in itself, an image of a riot means no more than a rock means, and this blankness is what allows the content of the visual to be infinitely exchanged across media.

The logic of the search engine governs Selina’s selection process, and content’s groundlessness in this format opens the image to be unravelled through her longer translating and negotiating of its informa- tion. The fluidity which defines its existence is brought to a halt in Selina’s approach: a permanence and singularity that relate to the affirmation of the image’s status as an object replaces the speed, chance and relative value inherent in the deployment of the image as content. The obscurity of the object affords it its endless potential, its non-commitment to any new meaning-system. It both defies and embraces an absolute plurality in its distillation of content into content’s potential. In this way, a Christmas tree becomes not so much a generic version of itself in the painting, as it becomes a thing of openness, a thing to address and engage with.

In the latest Art New Zealand Judy Millar describes in an interview her desire for an “impossible complexity”. Reading this, I found that I could relate to her sentiment, in the sense that my own aspiration is to create a painting containing no abstract elements, while simultaneously evading figura- tion’s specificity. Impossibility doesn’t necessarily imply contradiction though; the sense of potential facilitated by the painted form’s multiple figurative suggestions is structurally integrated in my work in a way which perhaps resembles the processes by which subjectivity is formed. Here, the body provides a discreet material vehicle that seemingly integrates the often fractured (internally and immanently) traits of personality, consciousness and experience, bringing them together in fluid tension rather than perfect unison. As in the painting, there is no harmonious resolution between different components, but nor is there a jarring sensation: it is more of a driving complication that reflects becoming’s great potential.

More broadly, is painting’s contemporary status not one of impossible complexity? Indeed, how does one act with any sincerity in an arena where the permutations of possible play have been so impressively exercised? I consider my own engagement with the tradition to be one of directness and depth, but at the same time I’m wary that creativity can be stifled by the rules of the game: if one deals only in established conventions, only empty demonstrations result. Knowledge must not be allowed to settle and harden into things known. I would hope to address history as something vibrantly present, with the understandings exhibited in the work arrived at through process, discovery and contingency. Intuition expressed by an individual might be considered a record of thought made material, but intuition expressed from a position enmeshed within something greater would actualize a fluid epistemology.

It might be true that such an open engagement of painting’s past is only possible on the far side
of the world from where that history was played out, freed from the weight of what’s gone before. A more-often-than-not mediated experience of the tradition is what creates the slippage involved in the use of its conventions. But it is this slippage that loosens the grip of tradition on the artist, and of the artist on the work; and it is from this slippage that the work is born.