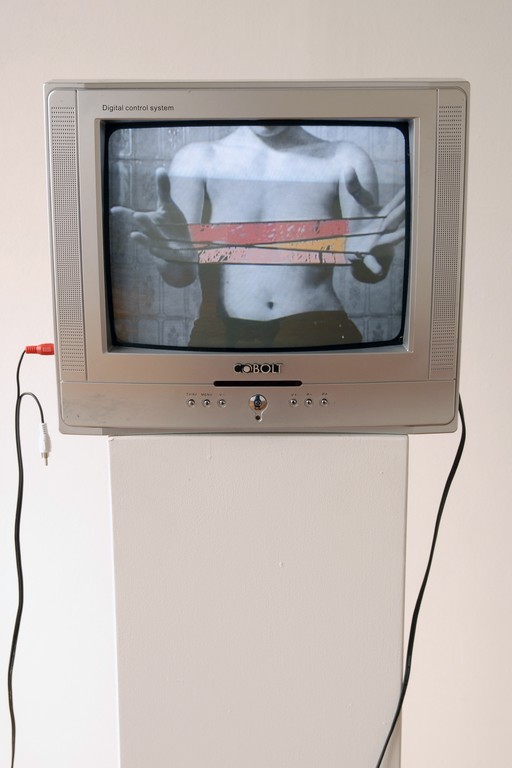 A set can be an evocative grouping:

We are privy to the labour of the artworks by consenting to look at them. We enter the contract of the alternative, a contract that binds our attention to a range of temporal assertions located across traditions, topical preoccupations, and the urgent architecture of the future. The artworks here are intent on evoking new options for what it might mean to become apprentices to time, to become skilful temporal beings.

Requiem is understood as a mass for the dead, derived from requies/rest and quies/quiet. The works in this show suggest that to up-skill as temporal beings entails the invention of alternative kinds of rest and quiet; a breath under breathing; a thought under thought; a feeling under feeling; a body under the body.

Such an approach aims to declare our accomplishments or failures to live in the world, to look at the world - singularly and generally, perceptively and inattentively, sometimes within parameters of shame and dignity.

Such an approach might involve the invention of a ship, bearing architecture of mutiny; the acceptance that bricks are heavy, and that bricks are habitation and memory; that sensitivity to tangibilities of body mind and emotion can provide quiet and give rest to exhausted aesthetic probabilities, those puffed and moderating meanings. The alternative to memory could still be memory: quietly evocatively grouping, coming to rest in set after set.

Vivian Lynn’s ‘Book fan series’ optimises the development of set and alternative set by evoking a mode of refrain. Focused as refrain, the works suggest both instances of repetition and fissure. We have an evocative grouping: paint marks on folded hardened paper and symmetry by folding or symmetry by deliberate mark making. We bring to the works our memories, branded already with the history of the Rorschach Blot - a history of mental interpretation, ‘unconscious’ time, and traditions driven by indefatigable definition.

There is a sense of mutation harboured in the work through the visual folds, the fan squeezed in on both sides, inflecting hips. The implied mutation could be the design of the ‘mental’ element, or the ‘set’ element1. The mutation could be the enacted transference of memory, the idealism of that transference; that notion of relationship and connection pushed into the foreground so that its reception might be subdued or mirrored by exclamations of hope and skepticism.

Just as it is improbable for two electrons to inhabit the same space, these works evoke an unprecedented intimacy, the intimacy of memories forged together, fibrillating and collaborating and vying for the same resting place. Mutation in these works labours in the form of refrain and condensed memory, the repeated mark that is resolution refracted through active and passive states, linear and minutely curved states - memory in time, the intimate practice of memory both repeating and breaking away.

Justine Walker’s ‘Untitled (Rainbow)’ insists on capturing a bar of prismatic light that appears as a gentle gash on muddy coloured carpet. The lines of colour in the carpet itself suggest a mute pattern, a faint reference system, a bland code when compared with the purity and coolness of the light. But when we actually look at the image rather than look at it from memory, we see the rainbow of light act as peroxide, turning the carpet underneath into a solid, almost magnetically angled line, suggesting a morbid axis about which we are physically twisted.

The carpet we realize is a painting or drawing, that is to say it is something that we walked over in a distant past but now look up to from our standing position, on the wall. We are drawn outward by the bleached ‘compass’ of light to the corners of the photograph, nearing the life beyond. We are in a state of moving without the memory for it; we think but without the usual crutch of thought’s applause.

Erica Sklenars’ video work is titled, ‘In the weekends I like to plant trees and imagine I am you’. Hair is inserted back into an unidentifiable part of the body, time is reversed, and writing in a catalogue of the work states that it aims to be ‘uncomfortably sensual’ as a viewing experience. The work could be seen as restorative, a micro performance of a visual return to a state before disturbance. The title however suggests we attend to the burrowing of one identity in another - ‘imagine I am you’. We further enter the fantasy of a voice promising to plant trees in the weekends.

Through this voice we seek out the fallibilities and pleasures of entering into a fantasy defined by certain duration, a period of habitation (what the voice does during the week, for example, remains undeclared). What we are asked to tap into is rhetoric of reversal, a reversal that refuses habitation, or makes what habitation there is ‘uncomfortably sensual,’ which is how we might describe an experience of transformation.

I am reminded of a sea chantey called The Mackerel and the Worm in which an evildoer turns a brother and sister into insect and fish respectively. At the time of restitution in the drama, the brother agrees to return to his human form. The sister however, refuses to be turned back into a woman. Sklenars’ work advocates for transformation2, not for the sake of a return to assumed order and origin, but rather the work advocates for transformation that opens the way for alternative transformation. The work seeks a companionable set, and aims to support the potential of that set, its unique labour in time.