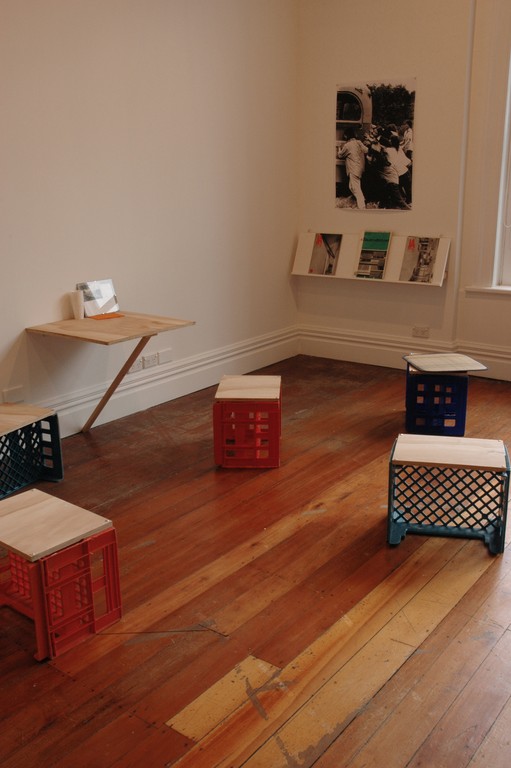 Inland sea is a track from Tim Coster's CD 'Landing' made available during the exhibition T & G Building, and is interrupted towards the end, very subtly, with tbe sound of someone trying to rinse their face. I say try as tbe source of the sound may actually have been someone unwrapping their sandwich, which on a second listen seemed more likely; in either case the rhythm of the track, its undertow of repeated sound, suggested someone working up the courage to do something.

Indeed another track Landing had me thinking about a plane hovering between flight and touchdown, but with no hint of intention, no indication of which direction would be taken in terms of any increase in height or redistribution of energy.

This sense of objects or mechanisms operating with the force of verbs, bound to actions and operations but with displaced intentions or logics of use, seemed key to accessing the exhibition as a whole.

I was immediately struck by how the show smelt. A few weeks after visiting the installation and seeing the related sound performance in the space I happened to listen to a smell-expert on the radio. Most people can't remember smell he said; in fact smell is so bound up in the present tense that its recollection can only happen in translation by the remaining senses.

Though I can't remember the smell of the space to describe it, I will describe what my other senses remembered of it. Mandarins were arranged along Enjoy's main windowsill. Each decked out in cloves; the citrus odour and the decorative skins reminded me of the stripes of a deck chair curved by the force of the wind. However, rather than feeling my presence in the space was being defined by a metaphor of dis­ placed leisure or ritual pastime, I instead thought myself concentrated by a palpable architecture of smell.

Smell often determines tbe social usability of a space. Habits of propriety see the use of air fresheners, fly sprays and deodorants, all of which can alter the way we inhabit spaces by neutralising, exacerbating or camouflaging smells with others. Smell can wrap a room, and I was reminded of Christo's grand gesture of subsuming architecture in cloth coverings. In the context of T & G Building, wrapping the space seemed less about camouflaging than capturing the space's (to be idiosyncratic) essential oils, that architecture determined sensory scope and the ability to focus one's attention while in a state of habitation. 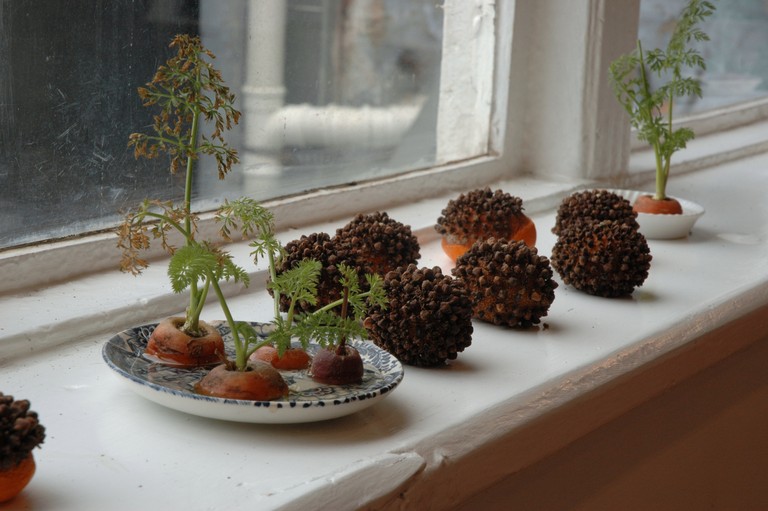 Outside light entered through Enjoy's windows and like the material of the ledge, was made fluid by cup saucers topped up with water, sprouting aerial carrot tops, beheaded with foliage still intact. The excommunication  of depth and by extension the disowning of the root seemed to favour the installation of a new kind of undergrowth; the water was reflective,made solid by the inverted images of the green sprouts, but visually transparent a moment later as you moved down the space.

So what is the material that contains or harbours growth and longevity? Light operating as the root itself extends to the ambitions of architecture -the visualisation of space through the isolation of light and its entanglement in matter. This is also a gesture of utopia. In the space there were presented two enlarged versions of architecture magazine covers, either of Japanese origin or architectural content.The magazines in full were presented to the side of these images.

Much like roots without bodies, these covers hovered between operating as gate to, or support for, future depth or engagement. However the inverse was true also as the presence of the magazine pages empha­ sised what was more readily available by way of the cover. At first glance the covers spoke via a design arrangement of text and image, a technique of isolation that allowed me to attempt or invent a new kind of reading, one that worked purely with the tools I had immediately on hand.

By placing cover with complete magazine the nature of an easily indexed content was exaggerated and questioned. My thoughts vacillated between generalities concerning the history of architecture, and the particular potential of the text and cover image for poetic readings and associations. I also considered contradictions that could disrupt intended historical precedents and future ambitions, implied by photographs of almost pure line on the covers and within the page spreads.

This experience relied a lot on sensitivity to scale by Tim Coster and Gaelen Macdonald. At first towards what seemed like an attempt to underscore scale's basic potential to impact on sensory experience and cognitive perception. However the show constantly seemed to pivot on an articulation of autonomy and how objects, functions and narratives engage with reflexes of independence or interdependence. This was most relevant in the booklet of construction designs and measurements also in the installation.

The yellow pages of the booklet overflowed with planks without hinges, impossible measurements, and possible measurements with impossible functions. There was implied an emotional connection of the read­ er to a surplus of some kind, a kind of overuse syndrome that emerges via a consideration of construction or production; a surplus T & G point to, in terms of the shortfalls and benefits of thoroughly anticipating the needs of the consumer or viewer.

A library of books about groups, families and extended networks organised under the broad ranging umbrella of 'communes' from the 1960s to 70s, were arranged on shelves around the space. This arrangement led me to consider how distance from political or ideological intentions once held and practiced by individuals might be represented. I also asked myself whether this distance is motivational or illusionary? More pointedly, I considered the extent to which one can achieve distance from the political preoccupations of one's time.

John Cage spoke about his work with music and sound in light of these questions. Using everyday sounds in his compositions, as much as traditional instruments and musical notation, was to Cage a way to free himself and his work from his personal prejudices. This process was of political significance for Cage also as, to paraphrase him, he required political ideas justify themselves by proving their usefulness to society.

Everyday sound, silence and interruption reflected a capacity Cage saw for society to re-stimulate itself through the sounds of its own workings, and by extension the very mechanics of its own imagination. The surprise of an unwanted, unexpected precedent fascinated Cage, where non-equivalence replaced a preoc­ cupation with relation, continuation and surplus, and instilled a sense of maximisation and balance that would occur in the situation of delivery, communication and reception.

There are many who have, and still do, contest this approach. What's of significance here, in terms of Cage's propositions in relation to T & G, is a consideration of the basic utilitarian function of objects, products, spaces and architectural devices as key to the survival of the political. And perhaps the survival of the political is less interesting and essential to us here than to understanding its parallel connection to the capacity and survival of the contemporary imagination. After all, it is the imagination that has to deal with a harder question than the potential life or death of capitalism; it asks: Is this the moment in which I can truly say, "all the answers are good?."1

Indeed rituals, from systems of measurement to the pouring of tea, don't always specify the time or space necessary for resting (easily described as thinking, acting, sounding) to take place. Rather they re-animate the very necessity that rest itself take place. Rituals are not strictly metamorphosis but rather channel a means for the communication and expression of that which gives imagination integrity in a state of change.

In T & G Building I inhabited the roles of reader, performer, listener and conversationalist. There are few places where you can articulate with silence as your primary tool, except in spaces that allow you to grapple with it.T & G's re-scaling of historical, material, decorative and performative precedents took place in the silence of numerous thoughts. Silence never smelt so refreshing as it did when I ran my nose along the Enjoy window during T & G Building's habitation.