Snake Oil In The Machine

“In giving his or her attention to an object, the spectator modifies both him or herself and it. Thereby providing and reproducing the ever-developing infrastructure of the status-quo”

What if, in the future, your iPad worked for only 15 minutes? Everyone knows that time is money, and time is time spent. Everything and everyone wants your attention, wants you to pay attention. Time must be attended to. Consider the complex apparatuses involved in bringing to your attention the news of the day, or consider, courtesy of Google Maps, the 150 hours of continuous video that is the Trans-Siberian railway. Or, finally, consider your deepest emotions, those wells of individuality in the abyss of your mind. How are they attended to? What are they worth? Perhaps we should speak pace: the philosophers of the economies of access, the correlation of being with commodities. This is a red-hot marketplace, a highly competitive environment as it is seemingly beyond the falling rate of profit; its only limit is our attentive consideration.

Matilda Fraser’s sculptural installation Ways of Looking puts some of these processes into play. Considered here are three beige machines. Plain, utilitarian, like co-op washing machines. A small opening on a facing slope is darkened and to the right is a coin slot. Each is identical except the black text indicating, we assume, each machine’s content: POETRY, LONGING AND DESIRE, SELF-HELP. The artist thus sets the terms for the game. Twenty cents will vend you a quotient of your preferred literary supplement. There is a kind of dark, shitting-in-the-streets, cynicism to this; a blunt, literal and deflationary shrug to any who yearn for the lofted aesthetic highs of an imagined golden-age or the transformative potentials of critical practice.

The attention economy is something marketeers have been all a-flap about ever since the New Economy burst the bubble on the industrial Fordist model of production sometime in the late 20th century. But art historian Jonathan Crary has traced its origins back to the mid-19th century when the nascent sciences of the psyche and the new media of photography, stereoscopes and primitive forms of cinema were re-organising perception. Mental states and cognitive processes were now seen as something that could be quantified, measured, and therefore manipulated and controlled. He claims that a central aspect of modernisation is the tighter and tighter grip power exerts on bodies by incorporating them into the ‘flow’ of highly orchestrated and controlled regime of images. Common across this history is the immobilization of bodies with the accelerating mobilization of mental and affective processes. Crary traces the path that has taken us from Edison’s kinetiscope to Taylor’s “scientific” management to contemporary neuromarketing. 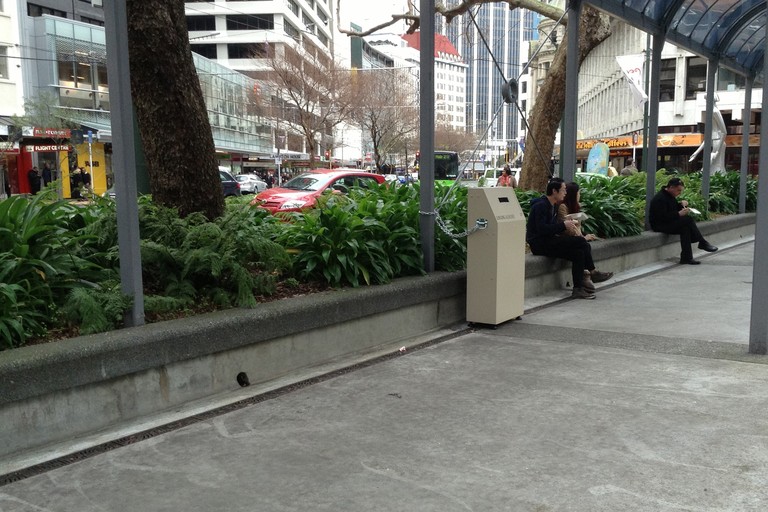 Fraser has placed her work in the context of the bitter War Against Passivity in the art world. Unrestricted contemplation is a vice that must be stamped out along with its ideological accoutrement, the autonomous, centred ego (code for rich, white, male). Passive spectators are pathetic victims of Spectacle and must be shown the light of the vita activa. New solidarities can and must be formed against the atomizing isolation of capitalist social relations. Artworks today require your full, embodied attention and the engaged and active viewer is now the ideal demographic of anyone who has ever written an exhibition proposal or curator’s statement. True to first impressions, Fraser mocks even this.

The attention economy relies on memory, inscription and brand awareness. This is not possible in Fraser’s work. Your twenty cents gets you all of twenty seconds and one frantically scans the tiny illuminated screen in the hope of “getting it”. But it remains a strange fact that I cannot remember a thing I read during any of the transactions I conducted with the machines. In fact, I forgot almost instantly. I might be the only idiot but I feel this is part of the machine’s programming. One could in theory I suppose keep pouring the coins in, but the effect would be the same: that strange temporal feeling of on-going oblivion. Download and forget. The work conducts a failure of attention-based experience. However, it still takes your money.

It parodies the mode of address of the literary genres that make up part of its material. Poetry, self-help and confessional narratives all seduce us with the promise of existential insight and cringing identification. Its humour comes from the promise of those affective excitations but never delivering. The work presents only the possibility for feeling anything at all. In this way it is highly formalist; minimal, almost empty. It evokes the conditions of possible experience (access to things in an attention economy) but immediately revokes this openness to possibility, by charging you for the pleasure and, through its calculated oblivion, denying any perceptual or affective trace persisting in memory. It does however keep you primed for more. If you had enough change you might be able to read the Duono Elegies. As Jack Palance said in Contempt, paraphrasing Hermann Goering, “Whenever I hear the word culture, I reach for my chequebook”.

Ways of Looking could be placed within the genealogy of conceptual text-based pieces or within the explosion of work since the 90s that actively invite (if not demand) participation on the behalf of the viewer. As exemplars think of Hans Haake’s MOMA poll, 1970 that asked museum audiences to vote via ballot on the actions of the then current New York Govenor (who was also on the board of the museum), or Felix Gonzales-Torres’s paper stacks and candies from the early nineties which audiences could take with them and eat. But I also see similarities to Wellington based artist and filmmaker Colin Hodson’s work The Market Testament, 2011 which set the lights of a mostly empty CBD office building to switch on and off based on the fluctuations of the stock market. Both The Market Testament and Fraser’s Ways of Looking are literal and concrete while revealing the formal, abstract forces that underlie our everyday lives: the unequal circulation of capital in Hodson and the disciplining of attention in Fraser.

And like The Market Testament, Fraser’s work also occupies the “non-art” spaces of the city. I hazard to use the phrase public space as I feel the work puts the notion of the public under some pressure. Following their debut at Enjoy the three machines, now separated from each other, followed an itinerary through various Wellington locations such as the city council building, the public library (though in semi-exile by the automatic doors), Victoria University, a bookshop and popular bar. The extension of the privatized pay-per-view consumer logic to all these sites is mimicked in the banal transaction required to “activate” the artwork.

However, perhaps there is another kind of public implied by Ways of Looking; a Twitter-esque community linked together through rumour, gossip and chance encounters. A community not limited to designated physical spaces but through informal chatter and happenstance. A community of movable types perhaps, but one nevertheless surveilled with the utmost scrutiny. Will money well spent on the poetry machine lead to an increase in poetry terminals across the city? Will a new entrepreneurial class arise to compete in the new market for rapidly circulated confessional/poetic text? Oh, wait…

Ways of Looking wonders at the becoming-information-becoming-capital of everything from bodily desire to personal transformation to the most rarefied of art forms. All that is solid melts into PR, as Mark Fisher has noted. I wonder if the status of so many artworks boils down to so many failing commodities. Fraser’s work brutally literalizes the attention economy visible at any interface, reproduces its stimulus-response procedure and then openly reneges on its inflated promises. The snake oil in the machine.