"Whose clothes are falling in a pigeon rain?"

Sometimes, when I have no idea of what a phrase means—could not articulate it even to someone who knows me well—I also have a very clear image of it. Pigeon rain. Soft spot. Coiled hagfish.1 Eye of Horus. Horn-ed viper. Chicken boots. I know each of them well, though not easily, not to write about. Where do these images sit? Are they in my head, perfectly crisp and all my own? Perhaps they could be anywhere in my body.

Sometimes, there’s an image sitting right there on the side of your brain, like a sock that fell down the back of the drawer. Or it might be deeper, waiting in the oesophagus, pulsating, and evasive. There are so many places in your body that these answers rest, subconscious but very definitely there, until something draws them up to the horizon of your vision. When I first heard Lucy say, “chicken boots,” it felt like something I’d thought of myself, ages ago, and now I was finally able to recognise it. Or got to crack up, just thinking about it. It got me thinking about images that don’t translate, images that you wear, or carry, or hold in your mouth rather than say. I can’t explain right yet. Humour me, it’s physical. 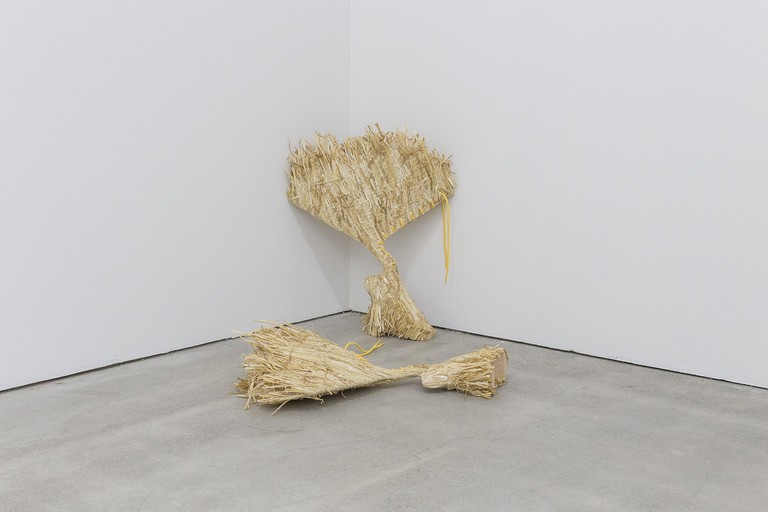 Lucy and I both watch Only Connect, a BBC2 quiz show hosted by Victoria Coren Mitchell (hosted is too passive really, I’d rather say, Coren Mitchell is the show). It is filmed in a small studio in Cardiff, no audience or prizes, just the contestant teams lined up at a lonely distance from each other across the room so they can’t hear each others’ muttering as they come to consensus. For each of six categories, four clues are read out. The categories are arbitrarily identified by hieroglyphs: twisted flax, horned viper, lion, two reeds, Eye of Horus, water. A question writer blogged for The Guardian sometime in season seven, explaining it like this, “The show's questions will cover any topic, and many may require knowledge of both arcane subject areas and popular culture. Questions may also be self-referential, or based on linguistic or numeric tricks, rather than requiring any particular factual knowledge.”2

Why am I telling you all this? I’d rather just watch the show myself. I’m not here to crack the sequence, I never get anything right on Only Connect. I’d choose horned viper though, for sure, for Lucy’s snake and for the way the contestants say “horn-ed”: they all do. Just focus on the images. Just relax your ear lobes. Just listen for the spaces between, because that’s where things connect. 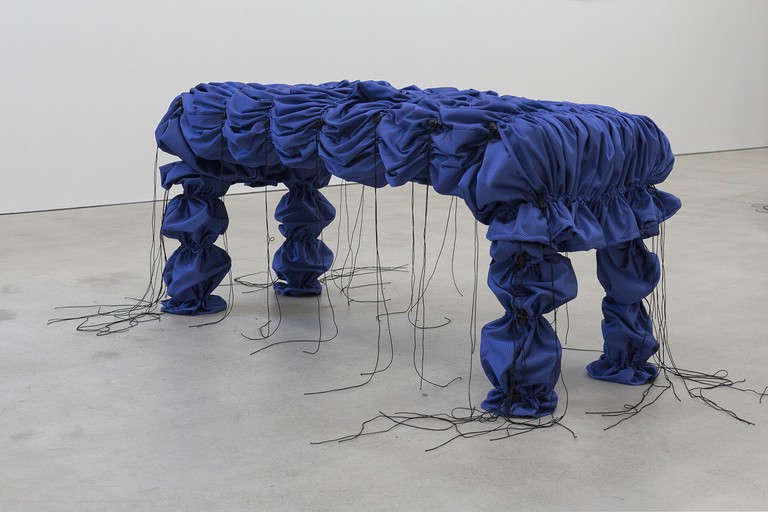 Here are the images then: two benches; suspended peanut; chicken boots; fruit snake. First, open-minded, I tried the images on like garments. I put them on like a baggy sweater and pants and wore them around all last week. It wasn’t comfortable, if I’m honest, and it is Covid-19 lockdown, so everyone is posting pictures of themselves looking absolutely great in pyjamas. We are also watching quite a lot of YouTube, most recently a channel where Mr Uekusa stacks a tower of Corona beer bottles and glasses of wine, like Jenga, and then slices a kitchen knife like lightning between them without disturbing the stack.3 Watching it on repeat while sitting in your pyjamas at the table is an almost hypnotic experience, calming like eye wash, but there’s also an incredible adrenaline hit every time the stack stays intact. In some videos Mr Uekusa whips out the tablecloth afterwards too, a sort of powerful footnote gesture. In this moment on YouTube, everything feels perfectly logical, every gesture meaningful. But here I am still, slouching around in two benches; suspended peanut; chicken boots; fruit snake, and I can’t write about it at all.

I realise I’m waiting for some sort of translation act, for something that meets me halfway with the words to validate the feeling of these images against my skin. To validate any physical feelings really. I want to see Victoria Coren Mitchell’s face light up because I nailed it. I think maybe I’m waiting for a kind of someone, something that will connect all these things, embody them in language for me. I read Sharon Olds’ line again, “Whose clothes are falling in a pigeon rain?” and I think, yeah, whose? But really I’m far more interested in the clothes, in the rain-that-is-pigeon too. 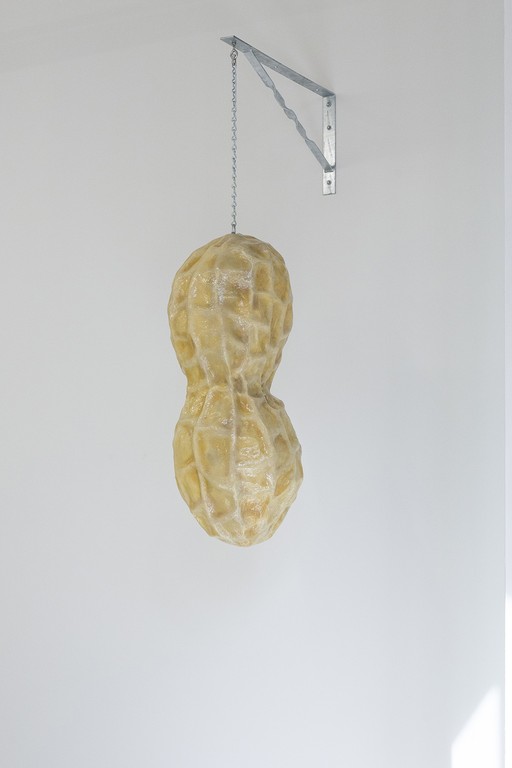 On one of these days inside, someone talks about an emerging Zoom-vernacular, and it reminds me of Hito Steyerl writing about “languages of practice,” and the acts of translation that take place within specific forms of practice, rather than between them. She opens with Walter Benjamin’s question: “Who does the lamp communicate with? The mountain? The fox?”4 and goes on to propose that translation can happen within language itself, rather than between languages. Shrugging in my loose-fitted images, I wonder. It’s possible that we can feel the vivid lines of correspondence between certain things, objects in relation to each other, without being able to locate them or secure them tight in words. It’s possible that in this proximity there is, nonetheless, a form of translation occuring. The moment where the snake swallows the fruit and becomes only fruit-shaped-swallow, is that translation? Is that where the body comes in?

Two benches; suspended peanut; chicken boots; fruit snake. Say those words and your mouth will be full, like a sandwich with something crunchy in it, butter and chips maybe. I move more easily in these clothes, in these images, not needing them to become words. I don’t want writing to be something separate any more, an end to the images, a place where the clues all fall into order.

In Only Connect, the time limit builds adrenalin in the bodies of the contestants and viewers, and has other physical symptoms, including disrupting grammar or ordinary verbal logic. Sometimes, the contestants start to say everything that comes into their minds, before it has been fully processed. It can be almost a new language, strange to overhear, like it should be private. This experience, the wrestle between a single image and its articulation within the logic of a sequence, makes a deeper kind of sense when I read Steyerl further, saying: “translation addresses the relationship of human language and thing language.”5 Chicken boots, for example, Lucy, you’ve done it. What would this mean for a writer though, someone trying to communicate their experience of an exhibition? 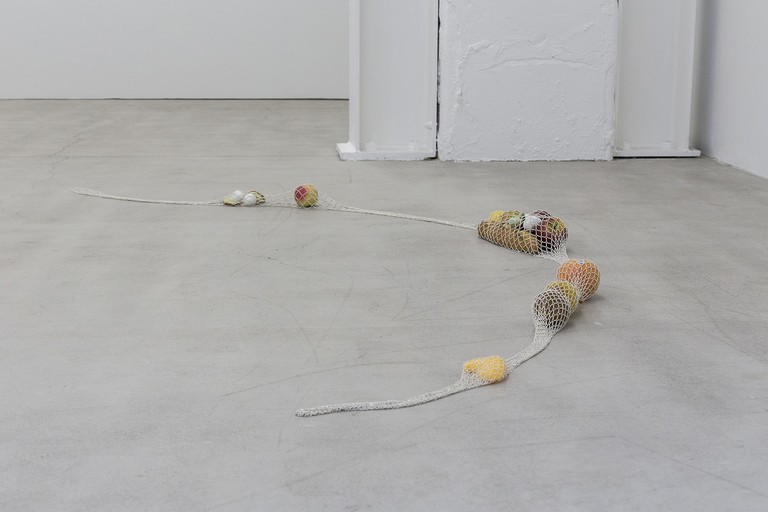 Inside my head, it might go something like this. Two benches; suspended peanut; chicken boots; fruit snake. The benches are supple like the corridor connection between railway carriages, concertina-ed with potential and ready to inflate on jumping. The snake is functional, a sack of fruit, a snack that you could swing as you walked, but also a necklace. The peanut hangs because it is a fixture at the gym, it’s shiny with effort and taut with concentration as it flexes. The peanut arrived wearing a seatbelt; the peanut was a hit on Instagram; the peanut got punched at the opening. The chicken boots are straw, and I grew up with chickens except we called them hens, Bantams, that jumped shambolic with affection into our arms when we got home from school. They wore feathery flares really, but if they wore boots they would be thigh-high and straw, they would require room to move.

I write this with perfect certainty, with a kind of extra-oxygen feeling because it’s just how it is. It makes no kind of useful sense, but I’m very grateful once it is done, like I’ve finally gotten all the pieces here on the page, to see. So I can go back to watching the video link I have of Lucy’s bread-shaped snail, slowly being eaten by sparrows in her yard, a translation of another kind where words don’t have currency. So I can change clothes, get up from my computer even.

“Whose clothes are falling in a pigeon rain?”6 It’s still with me, the precise weight of that line. The image is not my own, but I can’t give it up. Where do images like this sit, if not just in my head? And if not just an experience of my body—or especially close, like wearing clothes? Maybe it’s somewhere between: like the last part of the body, not yet finished when you arrive, the last gap to close hard and solid.7 Maybe that’s where they sit, steadfast, in the soft spot.