I once watched this bizarre TED talk where a surgeon was attempting to perform a head transplant. It was very Frankenstein. In my mind, I pictured brains spilling out of the patient’s head like spaghetti. I thought about how then, as though cybernetic, the soft matter would be mashed together with electrical wires then fused together to allow the body’s circuit board to function. I thought about the clunkiness of motherboards on computers and how they operate much like bodies do.

In many ways the internet is like a complex and giant, infinite motherboard. We are only able to access a small portion of the internet—so much of it isn’t explorable. The internet contains every answer to every question we have ever had—trying to adequately describe it feels overwhelming. Did you ever read that part in William Gibson’s Neuromancer where he describes cyberspace?

Cyberspace. A consensual hallucination experienced daily by billions of legitimate operators, in every nation...A graphic representation of data abstracted from banks of every computer in the human system. Unthinkable complexity. Lines of light ranged in the nonspace of the mind, clusters and constellations of data. Like city lights, receding…1

Thinking about Gibson’s text, I wonder if we have already undergone a process of cyborgization. I often find myself thinking about ways that the internet exists as a physical space; imagining clunks of wires drilled into the ocean and being eaten by sharks.2 With technology being so optimally efficient nowadays, it’s almost as though we are both human and mechatronic. My iphone is an extension of my body connected through my hands. I am a biorobotic replicant, a cyborg or perhaps I’m a nexus 7, counting each step I make on my pedometer app. I often think about Socrates talking about the body as a prison and of the soul being trapped inside it. Maybe our souls are trapped in both our bodies and our phones. No matter how hard I try, I cannot escape my body. 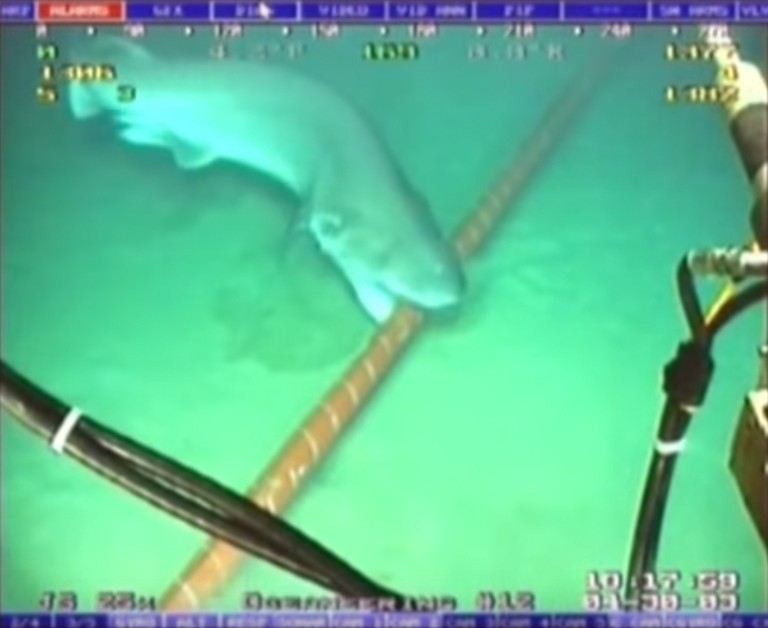 Spilled brains / synthetic circuits was an exhibition by Hannah Hallam-Eames at Enjoy Public Art Gallery, October 20 – November 13, 2016. It signalled a return to materiality and the body as both a critique of the rationality of cybernetics and of the so-called utopian freedom technology was meant to give us from our bodies; particularly for the bodies of wahine, people of colour and other minority groups. Eames’ approach to making seems rooted in the physicality of objects, as a way of reiterating that we will never be free from our bodies.

Arranged in a square on the floor were large pristine white tiles. The tiles were present for practical reasons—not damaging the wooden floors—but seemed to allude to a bathroom showroom, clearly demarcated and conjuring narratives around privilege and ‘whiteness’. Blobs of black sludge—black ash and corn syrup—were slowly spilling out of the two large, rotating plastic orbs, staining the immaculate white surface. The sludge, eventually cooling and hardening, resulted in a wax like texture. It was frustrating to watch these slowly erupting sculptures. The blobs reminded me of moments in my childhood—finding sizeable Portuguese-man-of-war jellyfish washed on the beach. The ocean too, in relation to technology, is like a motherboard: like the deep Web, oceans are vast and largely undiscovered. The way the black ink expelled, often in slow spurts, made me think of the way animals like squid release ink as a means of protection. Maybe I am considering this paradox because, during the course of this exhibition, Donald Trump was elected President of the United States of America and the Great Barrier Reef was officially declared dead. The end of the world seems near. Nature seemed to express an anxiety that I was feeling over the ecological, economic and political instability of our World.

Eames melted these pieces of plastic and mixed their contents together by hand. I wondered about the labour of fusing these intricate components of industrial plastic together. I thought about her hands shaking and wondering if she had burnt herself. It is easy to not recognise these seemingly minuscule invisible labours. Due to the way the machine, videoed scenes and animations moved I felt as though I was being watched or being directed around the space. I was immediately drawn to the humming sound of the machine’s motor produced and how the vibrations made me very conscious of my body. I considered my own body in relation to the traces of labour produced by, not only the artist but also by the other bodies who had navigated the space before me. The plastic orbs were attached to a beam on the ceiling and moved in a clockwise direction through a motor. These kinds of motorised sculptures can be temperamental and often come together through a process of trial and error with the outcome often being a surprise to the artist. Yet this particular work seems to represent the illogical nature of power structures, which have somehow been deemed ‘logical’.

This focus on the illogical nature of rationality found in cybernetics also recalls the way capitalism works. Everything is rational in capitalism, except capital or capitalism itself.3 Capitalism operates under specific binaries centred around desire and power. Spilled brains / synthetic circuits looks towards the collective need for the liberation of desire within capitalism and the decoding of consumable ‘objects’, which is the relationship between production or ‘value’ and the naturality of ‘work’. Commerce or money is inextricably linked to desire, because money is designed to fulfil our desire for not only objects, but for more money. This desire is intangible, as our desires as emotional beings are more nuanced, especially in relation to the ongoing digitalisation of our lives. Money is what organises the ‘violence of competition’, which exists especially within finance, but is clearly a part of how the art world functions. Violence, capital and production intersect and form the way we relate to one another.4 Our want and need for money is an unlimited desire.5 The framework of our society is centred around these socio-economic and political infrastructures that enable the organisation and distribution of power and repression. The rationale is somehow always the rationality of an irrational.6 Eames’ work plays between these two states, confusing, challenging and questioning the relegation of patriarchal power dynamics.

I found myself walking through the space in time with the paced sound of the motor; it’s sound narrated a sense of time. I have always liked the idea of the artist designing a space like a conductor directs sound—that the work within a site might direct the viewer’s body. This humming sound was echoed in a video of a large structure Eames had built to burn macrocarpa trees into ash—the same ash collected and mixed with corn syrup before being placed inside the plastic orbs. These trees were planted during Eames’ childhood on her parents' farm. While in art school, Eames first created a series of large-scale sculptures from the felled trees. Eames then remade these works through burning them, as a means of rejecting the possibility for the commercialisation of her work. This action highlights an understanding of the needlessness of objects; or rather the constant output of physical art objects that perhaps need to either not have been made, destroyed or remade. There’s violence in this action, but also an offer of transformation through the process of burning. It made me think about the way in which various Indigenous people, including Māori, used fire to burn back the bush to collect food. Fire acts as a life source as a means of rebirth or recreation, as well as a destructive force. It is often through violent processes that life and sustenance can emerge. Regeneration is also an experience of the cyborg, with our bodies increasingly becoming more and more intertwined with technology as a way of dismantling the construction of ‘gender’.7 The relationship between technology and our bodies is reflected through the use of a drone to film this video. Using a drone deceives how large the structure used for burning was and adds to questions of surveillance and the biopolitical urgency of the human race in a time of political and economic crisis. It set a sonic pace to really consider both our own bodies and our relationships with technology and other organisms, as well as firmly establishing Eames’ interest in the intersection between ecological and cyber feminist ideologies, which have informed much of her recent bodies of work.

The dichotomy between the illogical and the logical is again represented in the presentation of a second video, which showed the metric measurements of the trees that were collected prior to them being burnt and transformed. The video was made using a free online programme and featured equivalent objects, such as a car rendered in a way that reminded me of early Microsoft 3D modelling programs. Using pastel tones, it allowed one to reflect upon the rapid rate to which technology is evolving and offered a nostalgia for a pre-digital age.  On the floor near this video were a number of phallic-looking plastic sticks, which were painted in a pastel tone. The appearance of these sticks added a layer of humour, but also worked in juxtaposition to the other mobile objects in the space.

Eames’ work made me consider my own mortality and how the relationship I have with nature and technology is mediated through my body. Given the social and political context in which Spilled brains / synthetic circuits was being exhibited, the exhibition illustrated an urgency towards materiality and maintaining an awareness of one’s body, our participation within capitalism and the preposterousness of power hierarchies, and the fraught agency technology has given us. Part organism, part machine, Spilled brains / synthetic circuits highlighted our own duality as organisms who mediate both our time and experiences through technology. Speaking to the phenomenon of ‘desire’ embedded within the goals of capitalist production, this work articulated capitalism as a fundamentally absurd infrastructure, one that enables the wheels of power to remain intact and unchallenged. This didn't signify that it was without empathy or nihilistic, but rather acted as a way to consolidate a broad number of concerns mediated through the farcical and bodily nature of each of these works. The physicality of making was embedded in the production and execution of Spilled brains /synthetic circuits, heralding a shift back towards the body, while also considering the inescapability of our bodies, particularly for wahine. It made me reflect upon my own attempts at digitalisation to escape my body and how little agency I have over my own image, because of the ways power and capital intersect. I thought about the spectacle and irrationality of our lives and how turbulence and stability seemingly coexist. It seems impossible for us to seize the means of the production in terms of destroying capitalism; it is so inherently entangled within the structure of our society. Even our self-representation is becoming a factory of capitalist production, as we become more and more reliant upon technology to assist us in every task we do, all through a tiny pocket sized phone. Spilled brains / synthetic circuits reminded me to think more about my body in this wheel of never ending consumption, and to accept the duality of stability and instability in a proto-digital world.